State aggressively prosecuted her – to "set an example.” But they later threw in the towel!

Pro-bono law firms refused to represent her, so MassResistance hired a “super” attorney. 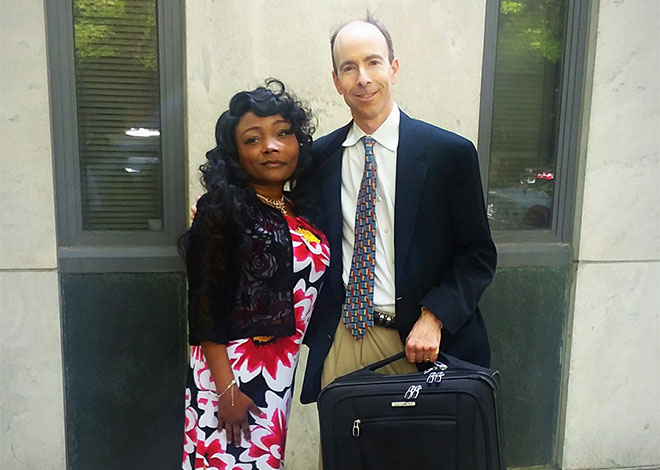 Marquitta R. Ford (left) with her attorney Larry Kohn outside of the courthouse at her arraignment hearing in April 2018.

Despite an aggressive prosecutor and the LGBT political movement lurking in the background, there was a big win in Georgia last week for the First Amendment and pro-family activism. And having a good attorney made a big difference!

As we reported over the past year, Marquitta R. Ford, a courageous Georgia MassResistance activist, was arrested and jailed (and treated in a humiliating way) by the authorities after legally protesting the LGBT agenda in front of the Georgia State Capitol.

Marquitta and her female friends had endured too many times the shock of men coming into women’s public restrooms – in stores, malls, restaurants, and even a subway station. It was traumatic for them.

The problems began after the Governor had vetoed a “religious freedom” bill in 2016, bowing to intense pressure from the national LGBT lobby. LGBT activists saw that as an opportunity for suppressing any opposition, and within months they were out in force pushing the limits – particularly in public restrooms. Businesses in Georgia were unwilling to stop it. The Georgia Legislature refused to take action.

Marquitta insisted that women needed to be protected, but legislators at the State Capitol wouldn’t even discuss it with her. So in October 2017, she decided to begin her public protest! 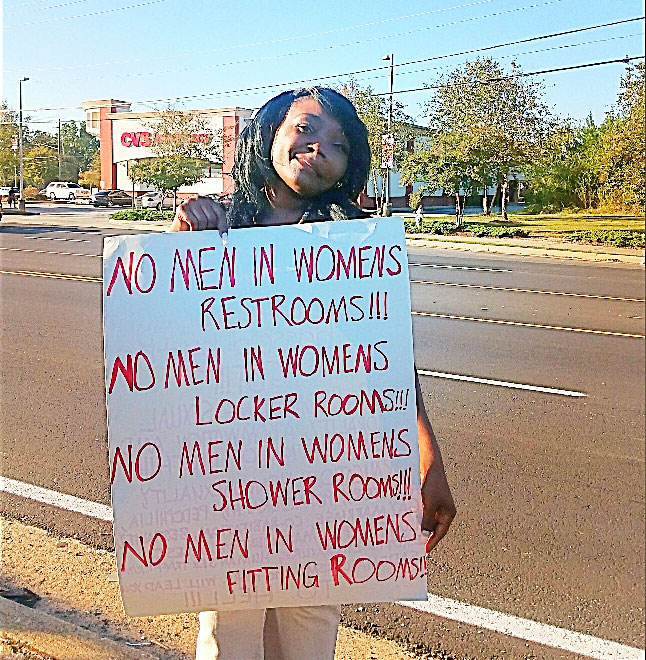 Near her home in Atlanta. This was Marquitta's message to those in power!

She had been demonstrating on the same spot – a sidewalk in front of the State Capitol – for over three months and had been assured by police numerous times that it was legal for her to protest there. 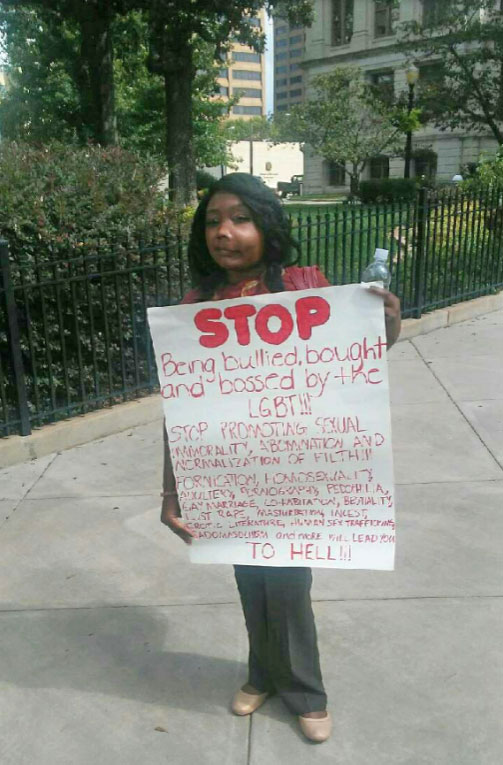 Marquitta protesting on the sidewalk outside of the Georgia State Capitol. Her message on this sign: "STOP being bullied, bought, and bossed by the LGBT!"

But on January 25, 2018, the state officials apparently decided that they had enough of Marquitta’s message. The same police who had previously allowed her to protest suddenly ordered her to leave and move to a “free speech area” about a block away. Marquitta refused. So they angrily arrested her and made her spend the next 36 hours in the county jail, under some particularly humiliating and unfair conditions.

Here's where they kept Marquitta for the next 36 hours. Not a pleasant place at all!

About a month later, the court notified Marquitta that her arraignment date would be on April 27, 2018. The District Attorney was pressing forward. So we needed to get her an attorney fast.

Getting a lawyer – not so easy

But an unexpected shock came when it came to finding her an attorney. We just assumed that a pro-bono pro-family law firm would be eager to defend a case like this that’s such a blatant injustice. And with all the news stories about men in women’s restrooms, you’d think a conservative legal aid group would jump at the chance to defend women.

Over a period of weeks, we contacted pro-bono pro-family law firms both locally in Georgia and across the United States. But every firm we talked to turned it down. Some wouldn’t even bother to reply.

Two of the pro-family firms told us that they were worried because Marquitta’s strong reaction to confronting men in the restroom might possibly be interpreted as “advocating violence against a transgender.” Another wouldn’t defend Marquitta because she had not followed the orders from the police to move to a different location. Good grief!

Then we got a call from Eugene Delgaudio. Eugene is President of the pro-family group Public Advocate of the US based in Virginia. Eugene gets our MassResistance emails and was very upset at what happened to Marquitta. He was even more upset when he found out that pro-family attorneys would not help her.

Mr. Kohn was very eager to help Marquitta. So Eugene’s organization and MassResistance each agreed to cover half of his fee. It turned out to be a wise investment.

He accompanied Marquitta to her April 27, 2018 arraignment.

The initial charge against Marquitta

At the time of her arrest, the police officer on the scene on charged Marquitta with the following offense: Preventing or disrupting General Assembly sessions or other meetings of members; unlawful activities within the state capitol or certain Capitol Square buildings.

This statute seems to be a catch-all to use on just about anybody. It includes a laundry list of “any disorderly or disruptive conduct” in the State Capitol buildings or adjacent areas. It covers a wide range of possible “disruptive” activities, from using “abusive language” to obstructing a sidewalk to possessing a knife.

The only obvious application of this law to Marquitta would be the accusation of obstructing the sidewalk. But the sidewalk where Marquitta was protesting was quite wide and was never crowded. She was simply walking with a sign. During the previous three months, none of the police there ever claimed that Marquitta was obstructing anything or anyone in any way.

Nevertheless, the prosecutor was adamant that he would not let her just walk away. He made it clear to Attorney Kohn that Marquitta needed to be made an example of – or else others would come and protest outside the Capitol also. He offered Marquitta a deal to plead guilty and simply take some classes, or a little community service. But Marquitta said “absolutely no.” She insisted she was not guilty, had a First Amendment right to be there, and would even risk going to jail rather than plead guilty.

A new charge against Marquitta

But in addition, Attorney Kohn pointed out something the police and prosecutor had missed. In 2006, the Georgia Supreme Court had struck down the statute (used as the basis for charging her) as too vague – unconstitutionally overbroad. Thus, they could not use it against Marquitta!

Normally, after a screw-up like this in such a minor situation, a District Attorney’s office at this point would just drop the case. But they were determined to nail Marquitta. So they came up with a new charge against her: Disobeying a lawful order of a police officer.

Marquitta clearly disobeyed the order of a police officer. But was it a lawful order?

Kohn explained that over the years, courts have weighed in on this type of issue. By forcing Marquitta to move to a different location – away from everyone she wanted to reach – it changes the message and chills her free speech.

One of the court cases Kohn referred to was the unanimous 2014 US Supreme Court case McCullen v. Coakley where the Court ruled that a buffer zone around an abortion clinic – making protesters move to a different location – violated the First Amendment by limiting their speech too broadly.

It’s reasonable for the state to say that people can’t hold a rally on the sidewalk. But Marquitta was not blocking anybody and her conduct was not disorderly. She simply walked and talked while holding a sign.

Moreover, this order was clearly given at the whim of this police officer (or his boss), since Marquitta had been allowed to do the same thing in the same place for the previous three months.

Thus, said Kohn, it was not a lawful order by the police, and Marquitta had the right to resist it.

The two court dates for the trial – and the outcome!

Kohn asked for a trial before a judge. The date was set for Nov. 28, 2018. The prosecutor held firm to pursuing this case, and Kohn held firm that he would vigorously defend Marquitta.

But as the trial date approached, it appeared that the police became concerned about having their officers face Kohn’s questioning in court. On Nov. 28, the two arresting officers failed to show up for the trial. So the judge decided to postpone the trial until Feb. 27, 2019.

On Feb. 27, the two officers again failed to show up. So the judge dismissed the case and struck it from Marquitta’s record.

She had won! A great victory!

A good lawyer makes all the difference

We’ll be painfully honest here. We believe that one of the reasons that our opponents – on the Left – are so successful in judicial matters, even though their cases are often ridiculously weak, is that their ACLU lawyers are very aggressive and fearless. Over 25 years, our experience with “conservative-movement” lawyers (both pro-bono and otherwise) has been largely the opposite: They are fairly thorough but non-aggressive, cautious, and afraid of offending anyone. The results have been almost universally disastrous. Just look at the charade of the “gay marriage” battles through the federal courts.

Having an aggressive, fearless, and enthusiastic lawyer working on our side – even though it cost money – was truly a rare pleasure.