Legislature has eighteen months to act. A new constitutional amendment? 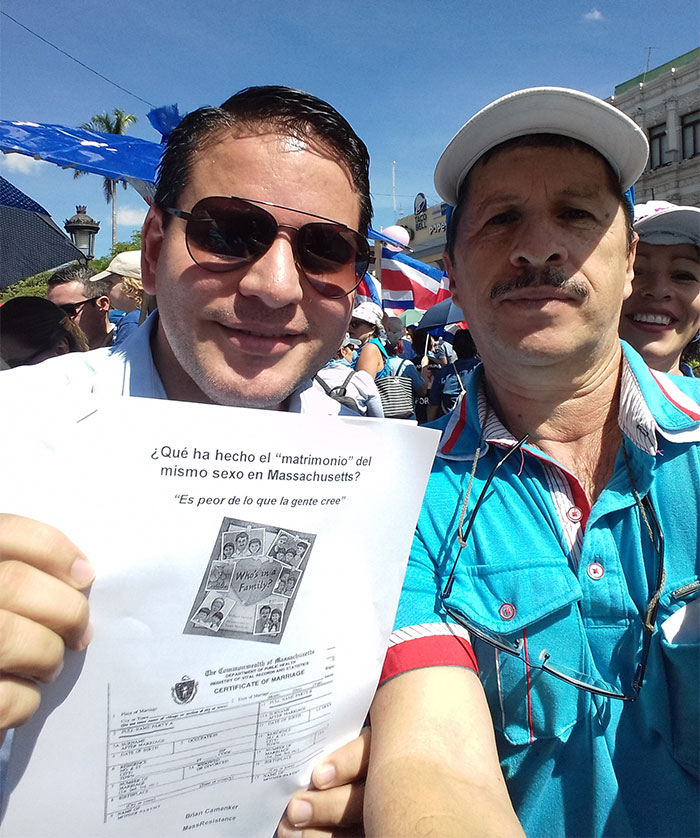 Our main MassResistance activist in Costa Rica, Luis (left) has been very effective in organizing and educating. Our Spanish-language pamphlet has been a key tool.

The worldwide LGBT lobby is a step closer to forcing “gay marriage” on the people of Costa Rica. But MassResistance activists there are fighting back – by educating people and lobbying the National Assembly! They are distributing the Spanish-language version of our internationally acclaimed booklet, “What same-sex ‘marriage’ has done to Massachusetts” among to citizens and Senators in the members of the Legislative Assembly. 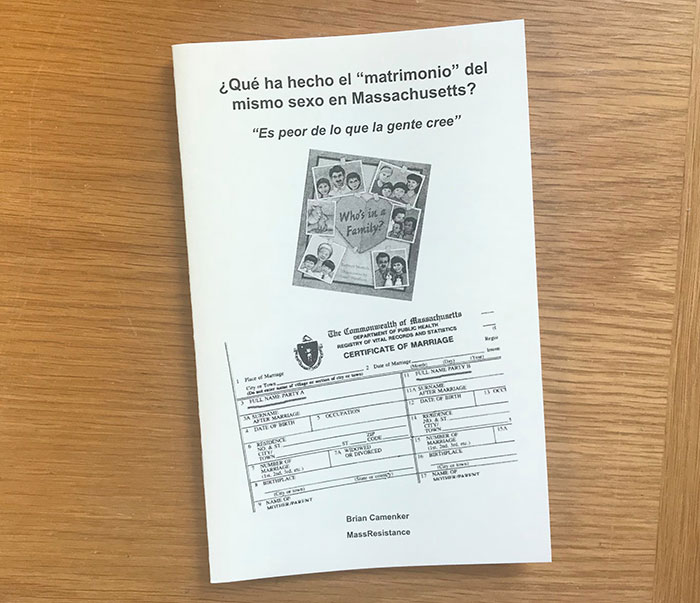 Thousands of copies of the Spanish version of our booklet were previously distributed in the U.S., Mexico, Jamaica, Spain, and other countries.

Costa Rica is a Catholic, conservative country. Same-sex “marriage” has always been illegal in Costa Rica.

Back in 2006, Costa Rica’s Supreme Court ruled that same-sex couples cannot be legally married, and that the country’s Constitution does not require that same-sex “marriage” be recognized. The LGBT lobby tried to get it passed by the Legislative Assembly but were unsuccessful.

However, the international LGBT movement would not give up. As in other countries, they funded pro-LGBT politicians and organized LGBT political action groups in Costa Rica. Over time, their power increased across that part of the world. 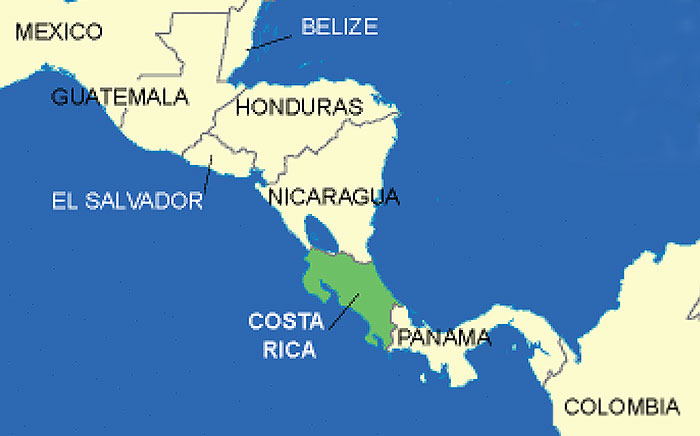 Costa Rica is the latest of the Central and South American countries being targeted.

In January 2018, the Inter-American Court of Human Rights ruled that same-sex “marriages” should be recognized throughout the Central and South American countries under its jurisdiction. While it does not have the power to force its rulings on countries, it does have influence in the judicial establishment.

The LGBT movement in Costa Rica jumped on this by filing lawsuits before the Supreme Court. They had the liberal political establishment – including the country’s president, a former rock singer supported by the LGBT lobby –  at their backs.

This time it worked. On August 8 the Costa Rica Supreme Court ruled that the country’s same-sex “marriage” ban is now unconstitutional and discriminatory! (It’s the same Constitution from 2006, of course.)

As part of the ruling, they gave the National Assembly 18 months to change the country’s marriage laws to conform to the ruling, or else those laws would be declared inoperative.

This was anticipated, so even before the August 8 ruling, MassResistance activists were in the streets and in the halls of the Legislative Assembly educating people. 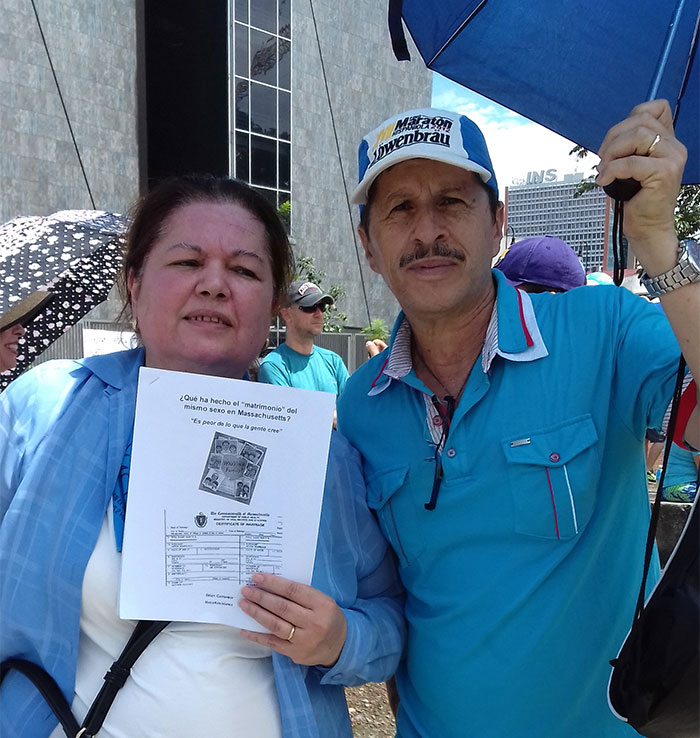 Once people start to understand what's in store for them once "gay marriage" happens, they want to do something.

Here’s what our activist Luis reported back a few days before the ruling:

In our congress we have 57 senators. The pro-family Restauracion Nacional party has 14 seats. It is the second largest party in the congress. It is the unique, completely pro-family and pro-life party. Thank God, today I could reach 4 of 5 of the 14 senators and explain about the booklet. One senator’s aide promised me to distribute the booklet to the other senators. 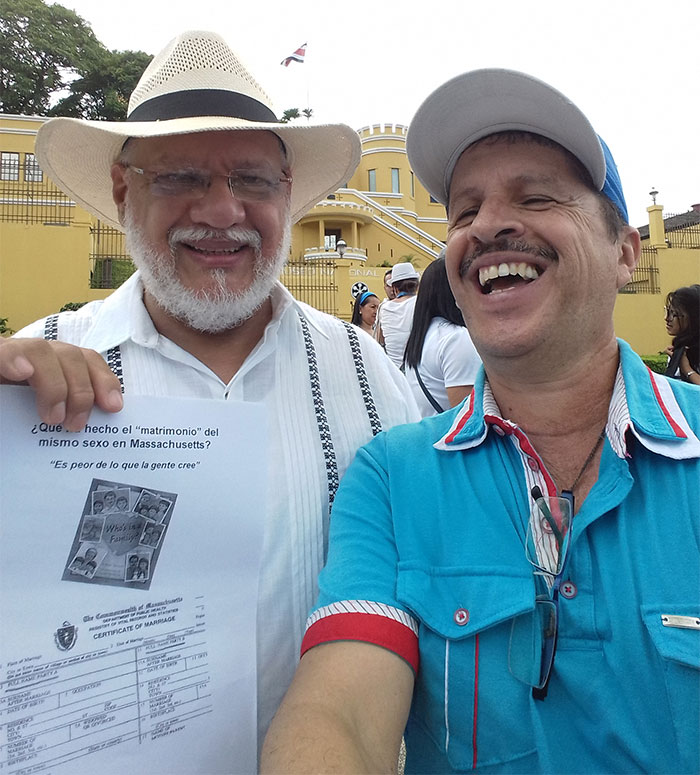 People are happy that somebody's out in the streets doing this!

Since the ruling, pro-family politicians across the country have been vocal that they will fight this. Pro-family activists are seeking big action, possibly a constitutional amendment.

There appears to be no specific action plan yet. There still are nearly 18 months before the Court’s ruling officially takes effect. MassResistance activists will continue to be a part of the fight!