In Massachusetts, Pastor Scott Lively is turning the Governor’s race inside out against incumbent RINO Charlie Baker in GOP primary. Election this Tuesday, Sept. 4.

Governor spending hundreds of thousands of dollars to beat Lively – a close election is looming! 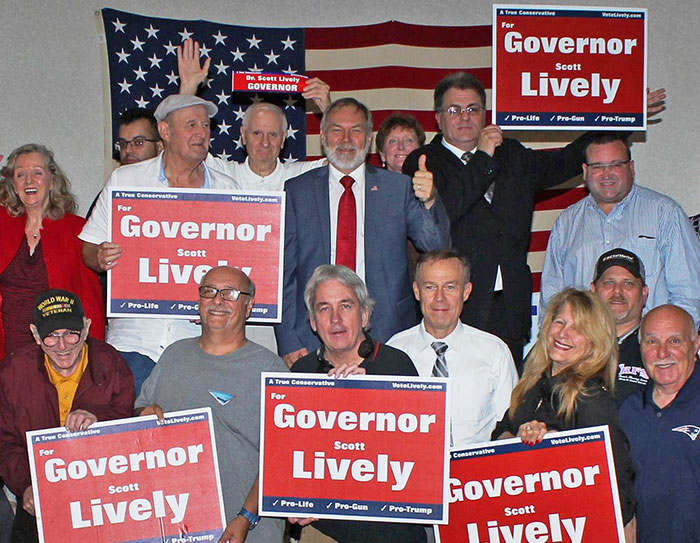 Scott Lively (center, in suit) has passionate supporters across the state.

UPDATE: In the Sept. 4 GOP primary Scott Lively got 36% of the vote against the incumbent Governor. This was even higher than the 28% he got at the GOP State Convention in April. It's shocked the establishment!

Imagine a state where the Republican Governor is a proud pro-abortion, pro-LGBT hard-left liberal. A pro-family conservative comes out of nowhere to run against him in the primary. He ignites the GOP grassroots, barnstorming the state, and is in striking distance of winning. The incumbent is forced to spend hundreds of thousands of dollars on advertising to gain back ground. Welcome to Massachusetts!

The most exciting statewide pro-family political campaign in America is taking place in, of all places, Massachusetts. On Tuesday, Sept. 4, Republican voters who come out to vote that day will decide between Scott Lively, an unapologetic conservative pro-Trump Christian pastor, and incumbent Governor Charlie Baker, probably the most liberal anti-Trump Republican Governor in the country.

Just how bad is Charlie Baker?

Governor Charlie Baker, who was elected in 2014, has never tried to hide his contempt and disdain for the conservatives who make up the base of the party.

Here are just a few of the things he’s done in that time:

By many accounts, Charlie Baker is worse than his liberal Democrat predecessor, Deval Patrick. It’s no wonder that the Boston Globe constantly labels Charlie Baker “the most popular governor in America.” (We’d like to see those polls!)

Lively shocked the establishment by getting on the GOP primary ballot!

Scott Lively is a conservative Christian pastor based in Springfield, MA, but with a worldwide following. He ran for Governor in 2014 as an Independent and got about 2% of the vote. But he clearly learned a lot!

His 2018 campaign started off with a bang. On April 30, Lively shocked the GOP establishment by getting 28% of the vote by the delegates at the Republican State Convention in Worcester, despite a well-financed effort by the Baker and the establishment to keep him off the ballot entirely. Since then his support has only gone up. Much of that, as with President Trump, is a reaction to massive attacks on him by the liberal media and GOP establishment.

When he ran in 2014 Lively was virtually ignored by all the media. They considered him a “fringe” candidate who was going nowhere.

But liberals despise any real conservative who is becoming potent. This time, the Boston area mainstream media has exhibited an astounding and relentless “Lively derangement syndrome.” There have been more lurid, hysterical articles and radio/TV reports about Lively than any other candidate in the state, ever. In the Globe he’s called “anti-gay pastor Scott Lively.” If you compare opinions in The Boston Globe (liberals) and The Boston Herald (RINOs) they don’t agree on a lot, but they both hate Scott Lively.

Their blatant lies and visible anger are remarkable. From their completely twisted depiction of his book The Pink Swastika (fact: it’s a compendium of research by various mainstream historians) to the lies about his dealings in Uganda (fact: Lively argued AGAINST onerous laws affecting gays), the media fabricates, distorts, and simply makes up their “facts” about Scott Lively. It’s beyond “fake news.” Luckily, conservatives are so used to seeing this done to President Trump that it has little effect on them.

The only exceptions to the anti-Lively parade are conservative WRKO Boston radio hosts Howie Carr and Jeff Kuhner, and the Boston Broadside newspaper, all of whom identify with the grassroots and enthusiastically support Scott Lively over Baker. 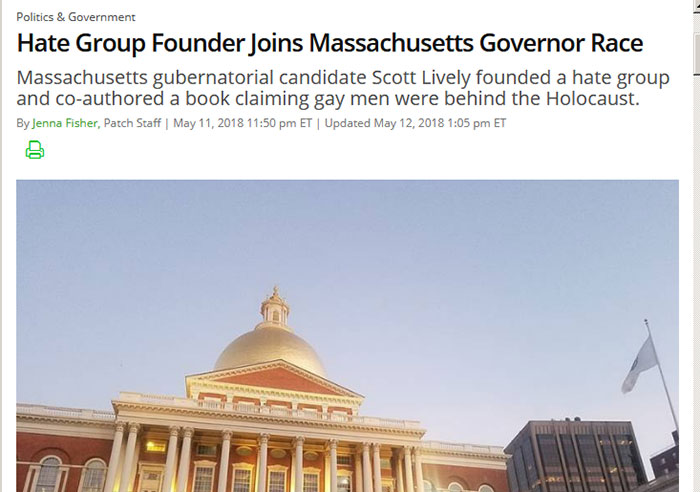 This is the winning lunatic anti-Lively headline so far. But it’s been a close race! From the Beacon Hill Patch, it quotes extensively from the extremist Southern Poverty Law Center.

Excluded from all help from the GOP

We wish there was more room to describe this. The Massachusetts State Republican Party (which is so corrupt that many people consider it a criminal enterprise) has broken its own written rules to deny Scott Lively the use of any GOP offices, equipment, election materials, or other help – even though he’s a legitimate GOP candidate for office. But the Baker campaign gets full use of it.

One good thing about this race is that it exposed the phony “pro-family” frauds in the State House. Every Republican state senator and representative has thumbed his nose at the grassroots conservatives and has publicly endorsed pro-abortion, pro-LGBT, anti-2nd Amendment Charlie Baker.

A very disappointing example is State Rep. Jim Lyons. Lyons got elected as a “solid” pro-life, pro-family guy. And he’s ridden that wave with conservatives. But this year, he’s campaigned passionately for Baker against Lively. He was even featured in a giant Baker video at the GOP convention. What’s going on? By strange coincidence, Baker did a fundraiser for Lyons just last week at the Lanam Club in Andover. This is what pro-family people are up against from GOP politicians. It fuels the support for Lively even more. 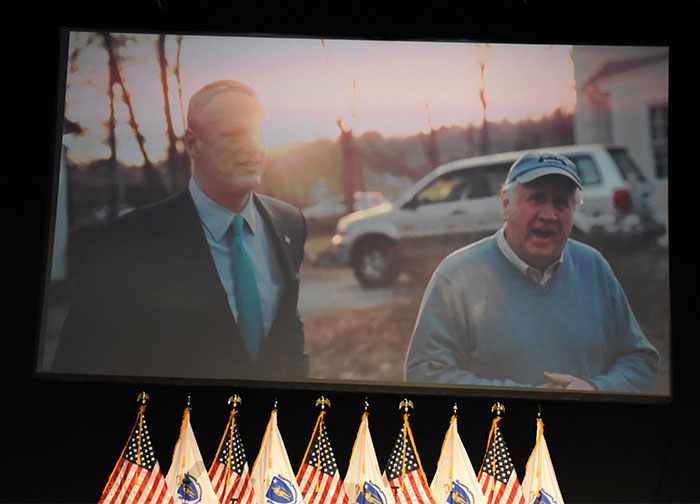 Screen shot of video being broadcast at the Republican GOP Convention of Jim Lyons (right) asking the delegates to vote for Charlie Baker (left).

Ignored by the Massachusetts pro-family establishment

This is a problem all over the country. “Mainstream” pro-family groups don’t want to get their hands dirty by openly supporting “embarrassing” hardcore conservative candidates like Scott Lively. So they back away and just ignore it. That's what's happening in Massachusetts. Take a look at this voter guide for the Sept. 4th election – the Governor race is not included!

Over the summer Scott Lively has been like a machine, barnstorming the state, often speaking at several events a day. He’s in parades, in stores, seemingly everywhere. And his signs are seen a lot in many parts of the state. 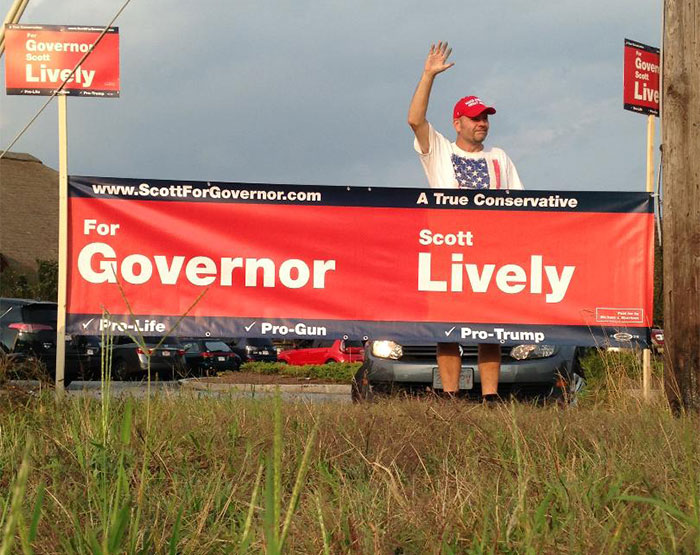 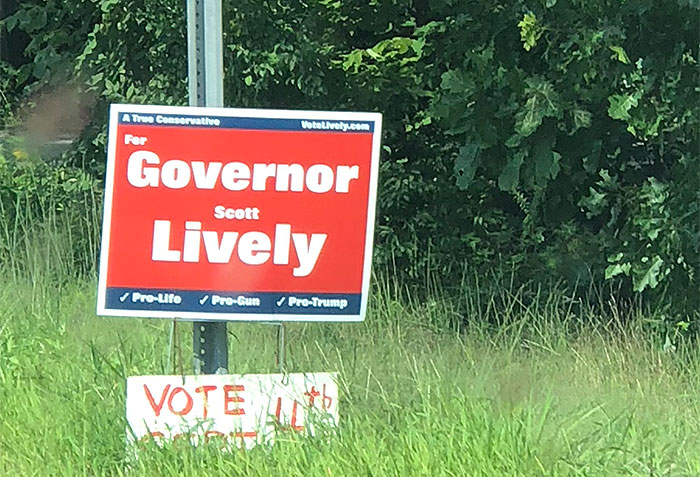 In 2014 when Charlie Baker was running against Mark Fisher in the primary, Baker hardly spent any money at all. He was virtually invisible, waiting to focus on the general election.

But this time he and his campaign staff are obviously worried. Baker’s flooding the TV airwaves with very expensive commercials, and also mailings, aimed at Republican primary voters. In other words, he’s trying desperately to get his RINO supporters to come to the polls instead of doing something else that day. 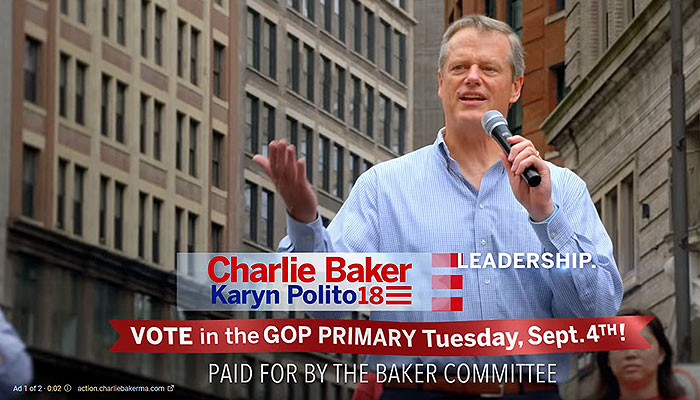 Baker's TV commercials targeting the Sept. 4 primary have been flooding the airwaves. 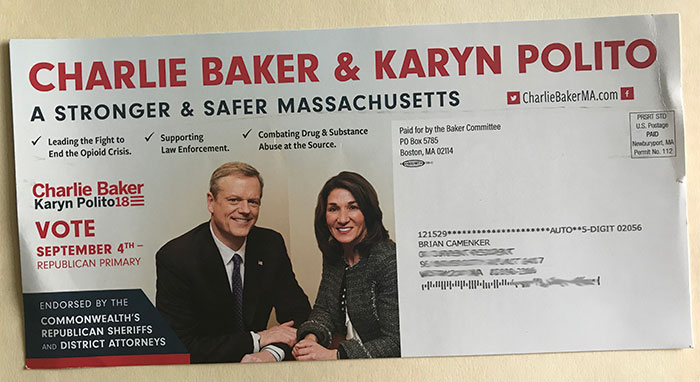 You’ve got to love it!

Come on, is this a fun race or what? A horrible RINO incumbent governor running scared because of a no-holds-barred pro-family, pro-Trump conservative – in one of the bluest states in America. You’ve got to love it!

The Boston Broadside, the only Massachusetts newspaper to enthusiastically support Scott Lively (and other conservatives) put out a special issue for this primary. They are distributing 100,000 copies across the state. It is full of great information for real, no-excuses conservatives! In case you didn’t get one, you can download it here. (And check out the ¼ page ad for MassResistance.) 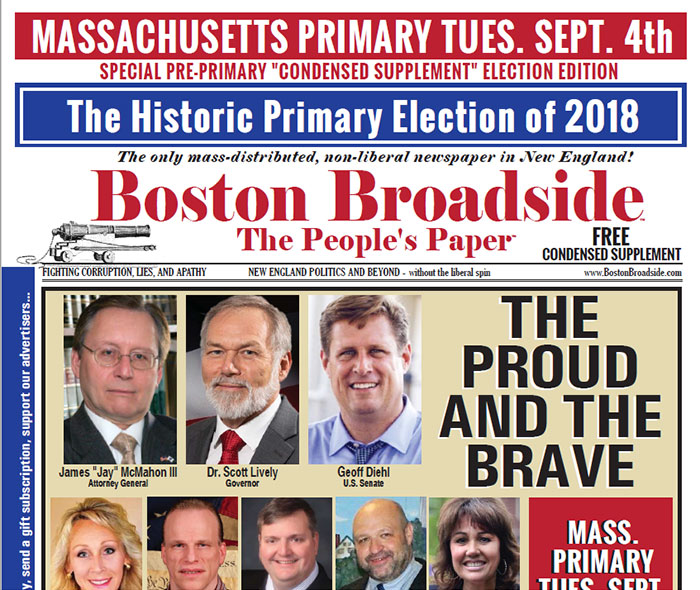 100,000 copies of this special edition of the Boston Broadside are being distributed across the state.

THIS TUESDAY, SEPT. 4 -- If you live in Massachusetts PULL THE LEVER FOR SCOTT LIVELY!