Bill would allow “sex change” for 14-year-olds without consent of parents. And under 14 years old with just one parent!

Already organized across the country and confronting politicians! 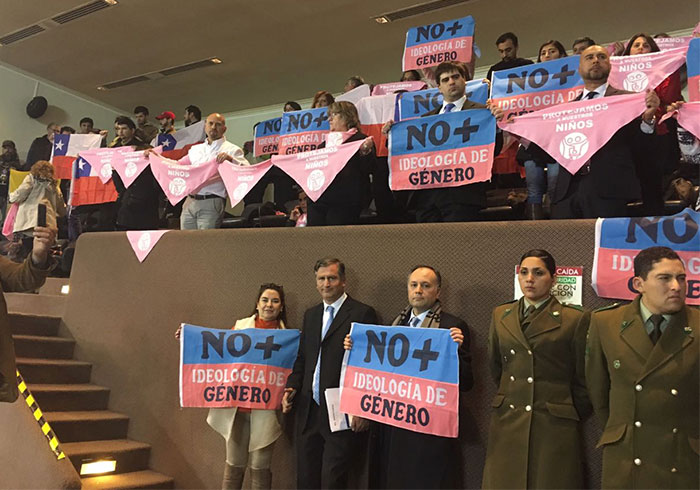 Chile MassResistance activists and others with big signs in the National Senate chambers, against the youth transgender bill last week. That day they were successful!

Back in June, activists in Chile contacted MassResistance for help. As their leader Cecile explained, the Chilean Parliament – the National Congress – was about to vote on a frightening bill. The bill would allow sex-change procedures for 14-year-olds without the consent of parents.

The radical LGBT movement is moving very aggressively in South America. They have infiltrated the highest levels of government and are pushing an agenda that is truly shocking. It is helped greatly by the cooperative mainstream media, a population relatively uninformed in “culture war” issues, and social media that blocks conservative communication.

The final vote on the bill will likely take place next week. But our newest international chapter, Chile MassResistance, is working to be organized across the country and is on the ground determinedly fighting this.

The bill establishes that transgenderism is not a disease, so no one would need to resort to medical exams or psychotherapy for a so-called sex change. People 18 and over could get a sex change by just showing an ID. Minors under 14 could legally get a sex change with only one parent agreeing. And at ages 14-18 if neither of the parents authorize it, the child can go to a judge. The judge will decide after speaking with a parent, and without requiring any medical examination or certificates.

Most people don’t realize what is happening. Chileans who find out about it are in disbelief.

Everything has moved very fast

Cecilia explained that the LGBT agenda has taken people by shock:

All this has progressed very quickly in three years and we almost did not realize how it was happening.

Sexual and gender education has been introduced without parental authorization as a result of an agreement between the LGBTI lobby, the Inter-American Court of Human Rights, and the previous Left government that was ratified by this supposedly center-right government.

We have the homosexual adoption law being discussed. Homosexual marriage will be legislated soon. It has already been announced that the law of free abortion will be introduced for discussion. The euthanasia law has been presented for discussion.

Moreover, the churches are not leading the fight. It’s up to pro-family activists to carry the burden, Cecile told us:

The evangelical church has timidly reacted, but there are no strong leaders leading the battles, and there is no activism. They have only tried to follow the progress of the laws and testify at the commissions in the Parliament.

The Catholic Church is mired in deep pedophilia problems and has no chance to raise its voice, so we are leading in some way what little we can do.

And as in much of the world, the LGBT movement has powerful forces helping them in Chile. As Cecilia explained:

The LGBTI lobby has resources, TV, radio and writings where they have desensitized citizens with strategies of victimization without it being able to discern the danger for their own children.

We do not have the media, only social networks (Facebook, Twitter). And many times they intervene preventing the dissemination and the work we are trying to do.

We are creating programs to disseminate all this news that is happening in our country because there are many people who still do not know or do not understand what gender ideology is. Unfortunately, the only way we have of informing Chileans, is by alternative means since communications media such as radio and television are totally bought by the LGBTI agenda.

We need all the help possible from MassResistance so that the citizens can understand and believe that this is an international agenda and that it is attacking the family. We are eager to become a MassResistance chapter!

Chile MassResistance gets to work!

Cecilia’s activists and other groups had already begun organizing pro-family people across the country. They had a petition that already had 19,000 signers. They had put together informative material about the issue. There were Facebook pages and some YouTube videos (which from time to time got blocked or taken down).

We worked with them on strategies and tactics. We built them an Internet-based system so that people across the country could communicate with their National Deputies and Senators (the members of the two houses of the National Congress), which really made a difference, they told us. In particular, we stressed the importance of direct, personal pressure on politicians. 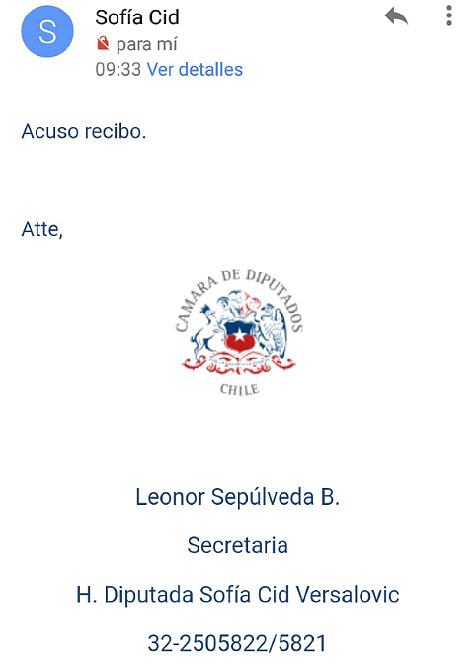 Here is a sample response from the flood of emails sent to Senators by their constituents against the youth transgender bill, using the system provided by MassResistance.

On Wednesday, August 22, a vote on the bill was scheduled to take place in the Senate. Our people organized about 50 activists to show up in the chambers of the Senate. They also distributed information to the members. “We had never done those things before,” Cecilia told us. 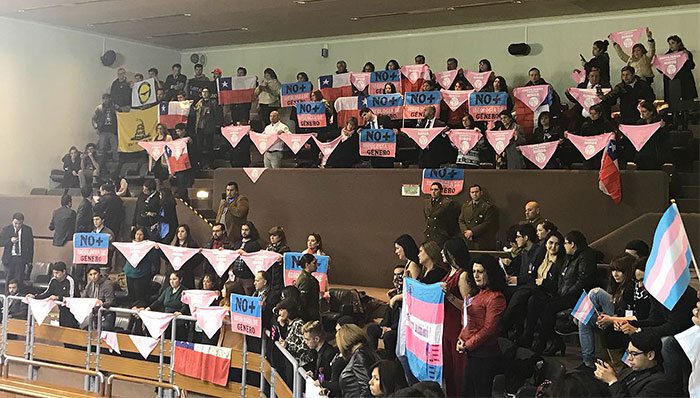 Their effort was successful. The bill's proponents realized they didn’t have the support to win that day, so they postponed the vote.

The vote in the Senate is now re-scheduled for Sept. 4. And if it is successful then, it will go to the Deputies the following day, Sept. 5.

In the meantime, our Chile MassResistance chapter is stepping up the fight. Pro-family people across the country will be personally visiting the offices of politicians this week. During these last few days the evangelical church has woken up and are calling to all members throughout the country to show up the 4th and 5th of September. 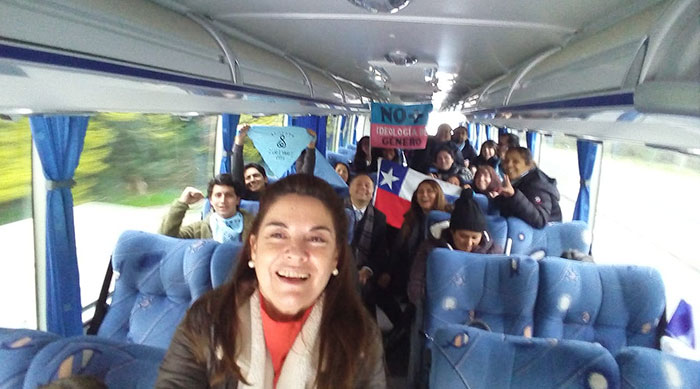 Busses brought our activists to and from the National Congress!

The pressure will be on the National Congress like they’ve never seen before on a “culture war” issue. The Chile MassResistance chapter is an outstanding group and we’re excited to be working with them!

We’ll keep you up to date on all of this.