Vote in Parliament is this Tuesday Sept. 4.

Nationwide outrage as citizens become informed about this bill!

See VIDEO below of protest! 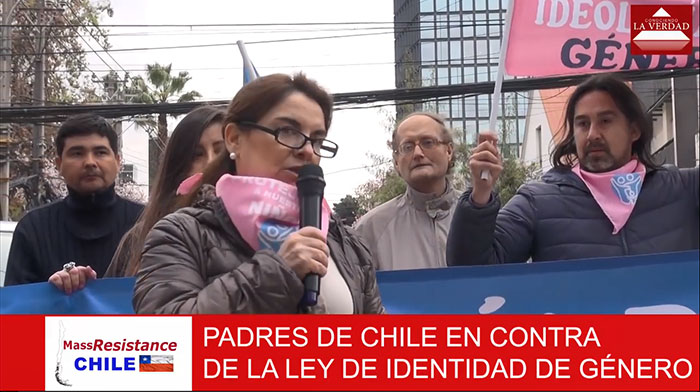 Cecilia, leader of Chile MassResistance, leads the protest in front of Senator's office in Santiago. Caption (from video below) reads: Parents of Chile against the law of gender identity.

Chile MassResistance activists have been protesting in the streets and confronting their legislators at their district offices to stop a destructive LGBT transgender bill targeting vulnerable children. 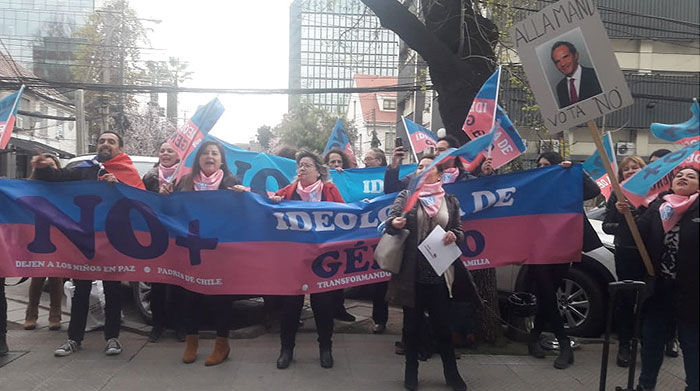 The protest in Santiago.

As we described in our report last week, there is an outrageous bill in Parliament - the Chile National Congress - that would allow “sex change” procedures for 14-year-olds without the consent of their parent – and for children under 14 years old with the consent of just one parent! On August 22, Chile MassResistance organized 50 activists to come to the Parliament and show their outrage -- which successfully caused the vote to be postponed. The vote in the Senate is now scheduled for Sept. 4. If it passes there, it will go to the House of Deputies on Sept. 5.

Last week all the legislators were back in their home districts. Chile MassResistance activists helped organize people across the country to visit the legislators’ district offices and personally tell them to vote against this outrageous bill.

But in Santiago, they took to the streets with a loud public protest. The demonstration also included representatives from other pro-family groups. It ended outside the offices of Senator Andrés Allamand, a key member of the Chilean Senate. They delivered a strongly worded letter and the 19,000 signatures from citizens across Chile demanding that the Parliament reject the bill.

What was particularly infuriating was that the Senator’s staff had recently agreed to meet with one of the mothers. But when she showed up for the meeting, they made her wait all day, and then made her leave without allowing her to meet with anybody. That riled the crowd up even more!

VIDEO: The PROTEST in Santiago!

Speaker: “We all know the damage that’s going to be done to thousands of kids and families. We are three million Evangelicals. There are a lot of people with us. The damage that will be done cannot be repaired if this passes.” 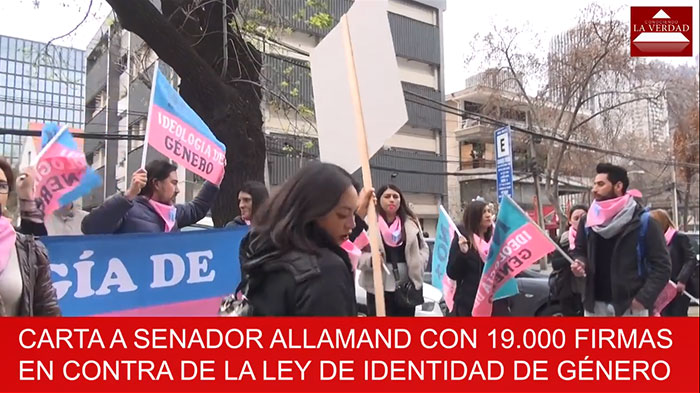 Caption (from video) reads: Letter to the Senator Allamand, the 19,000 signatures against the vote for gender identity. 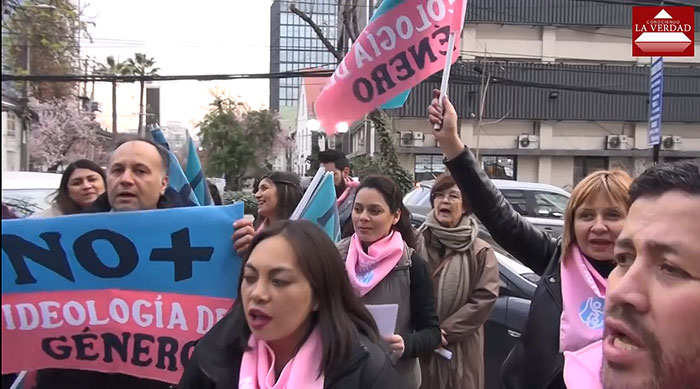 These pro-family people are resolute and unafraid! 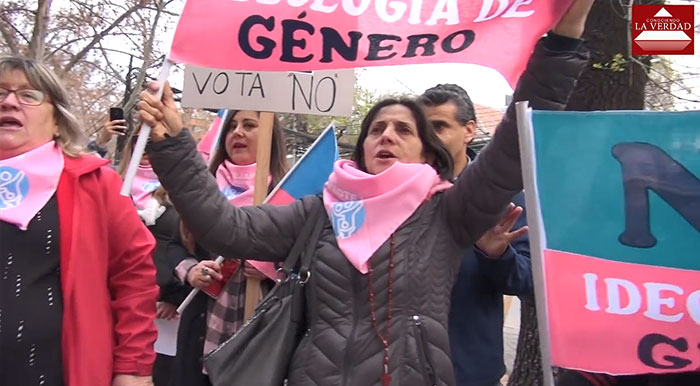 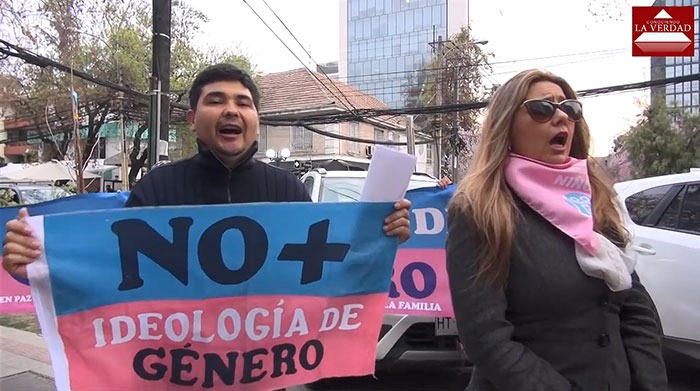 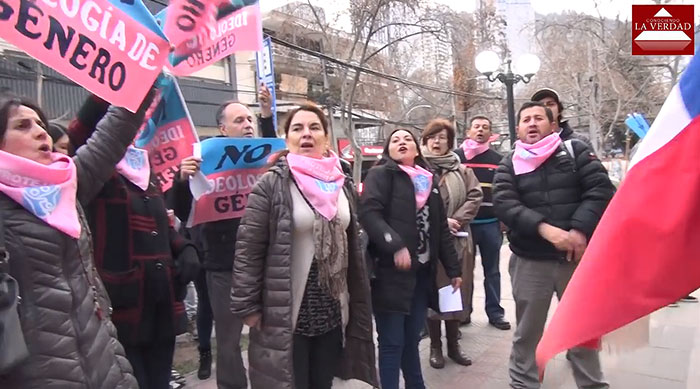 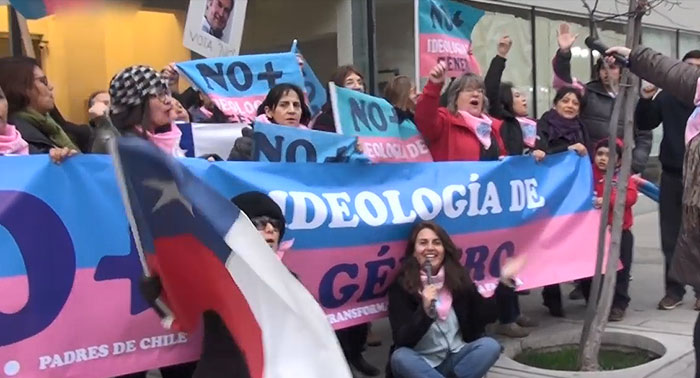 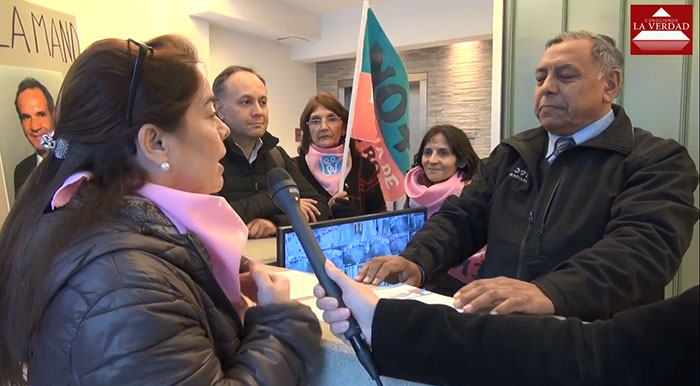 Inside the building, Cecilia delivered the letter and the signatures to the guard at the front desk. The Senator's office wouldn't let anyone come upstairs!

Up until now the LGBT lobby has been able to do whatever it wants in Chile. That’s finally changing. The pressure from pro-family citizens – led by Chile MassResistance – is now on the National Congress like never before!

We will let you know what happens!