The pressure from activists, parents, and local citizens worked!

In a “very pro-gay” part of the city. 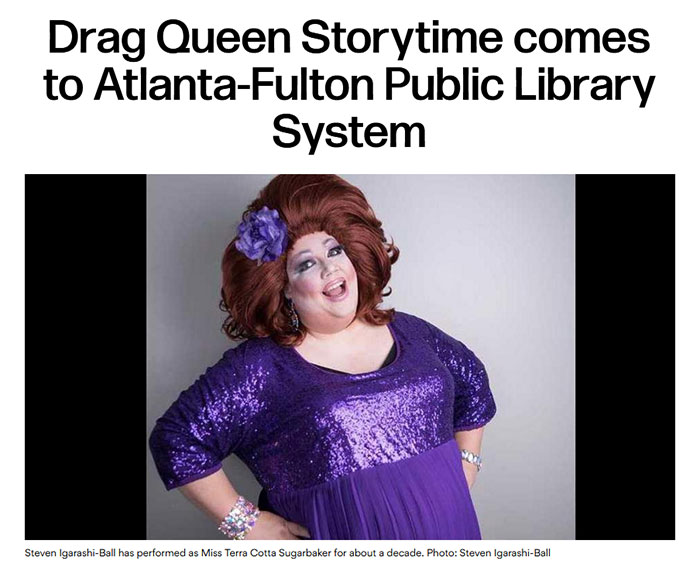 Our Georgia MassResistance chapter has stopped a “Drag Queen Story Hour” in one of the most pro-gay areas of the South. And more are being targeted as outraged parents contact us for help.

As we’ve been seeing across the country, the “Drag Queen Story Hours” programs held at local libraries is one of the latest well-organized efforts of the radical LGBT movement to indoctrinate young children and change their perception of reality. While the pro-family establishment works to “inform” the public to write letters and politely complain, MassResistance pulls no punches when it comes to stopping these horrible attacks on children.

A “Drag Queen Story Hour” scheduled for Sunday, Sept. 30 in the Ponce De Leon Library in Atlanta, Georgia was abruptly cancelled after pressure from outraged MassResistance parents and activists, and also other local citizens. 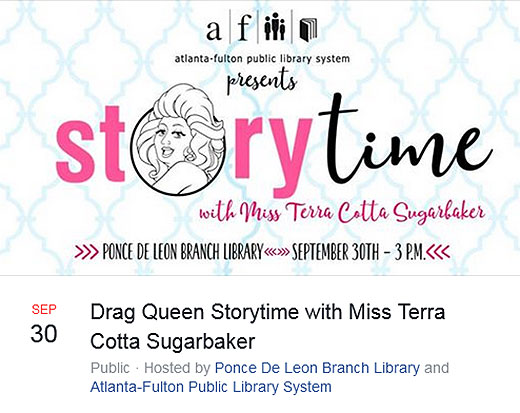 An ad for Drag Queen Storytime at the Ponce De Leon library on Sept. 30, 2017. They told us they were planning to do it again on Sept. 30 this year!

The Ponce De Leon branch of the Atlanta Public Library had done a “Drag Queen Storytime” on Sept. 30 last year. A month ago, when one of our MassResistance activists asked if they were going to do it again this year on Sept. 30, a library official said said yes, they were planning to do it then. It was very upsetting. At first it seemed that stopping it would be quite a challenge. 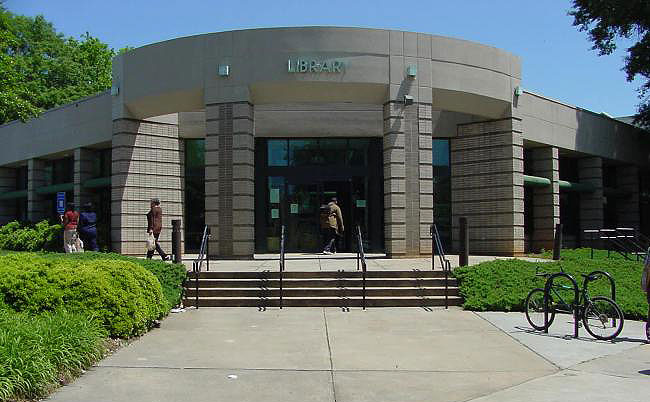 How bad is Atlanta?

Most conservatives are not aware that even though Georgia is a red state in the Deep South, Atlanta is one of the most liberal cities in the country, and the lawmakers are usually too cowardly to stand up to the LGBT movement there.

The LGBT agenda is strong and prominent throughout the city. High-ranking officials in the fire department and the public health department have been terminated because of their biblical, pro-family views.

Most of the Republicans are RINOs,” one of our local activists says. “And the churches have caved in to the LGBT agenda. One hundred pastors in the Atlanta area wrote an agreement to be more inclusive of LGBT!”

It’s even felt in the Capitol. Two years ago, Georgia governor Nathan Deal vetoed a watered-down religious liberty bill which would have allowed pastors and other ministers to avoid prosecution.

To start with, citizens contacted not only the Ponce De Leon library officials, but the elected Board of Commissioners which governs Fulton County. “One of the commissioners even agreed with our stance against these programs,” one activist reported. But more pressure was needed to get anyone to act. The library continued to acknowledge that another "Drag Queen Story Hour" was being planned for Sept. 30. So the calls and emails continued.

On Sept. 16, Georgia MassResistance parents passed out flyers in front of the library. It was a warm Sunday, and a lot of people came by. This clearly upset the library officials. 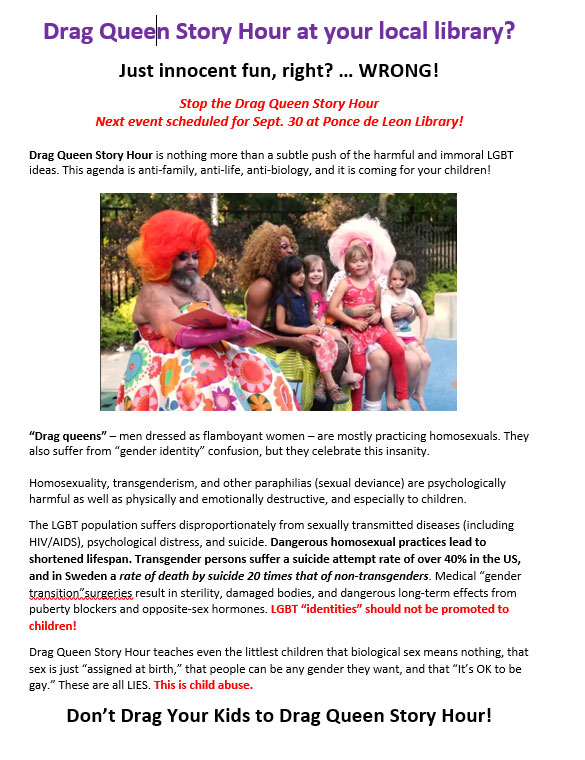 Here's the flyer they passed out. 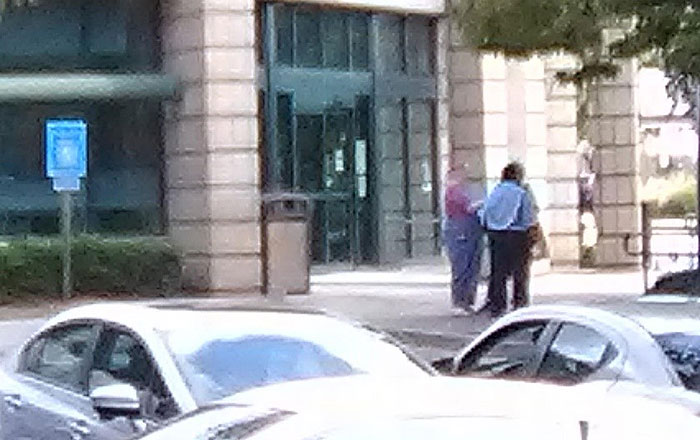 Passing out flyers at the library.

Parents also passed out flyers in neighborhoods, stores, and other public places in Atlanta, as well as sharing the information with their prayer groups.

More calls and emails poured in. For two days the Ponce De Leon library was not taking calls from anyone. The library manager refused to meet with one of the parents. At one point, the emails to the County Commissioners were bouncing back.

Then one of the Georgia MassResistance co-leaders received a rather threatening phone call on her cellphone while at work. “The person who called me used a voice box to disguise his voice,” she told us. “The person said ‘If you protest in front of the Ponce De Leon Library on September 30th, you will be removed from the premises!’” She filed a police report with her local sheriff’s office, “It means that we are getting to them and winning this fight,” she said.

The library gives up

On September 26th, we contacted the Ponce De Leon library. The staffer informed us that there would be no Drag Queen Story Hour.

Just to make sure that that library had not brought in the Drag Queen program under everyone’s nose, Arthur Schaper, our Organization Director who helped the Georgia team, called the Ponce De Leon Library the next day. The library staffer also affirmed – twice – that there was no “Drag Queen Story Hour” this year even though there had been one last year.

But just to be sure, Georgia MassResistance showed up a second time to protest in front of the library on September 30th. They handed out flyers for patrons of the library as well as to passers-by along Atlanta’s streets. The weather was good again, and the team made great contact with lots of people. The MassResistance team gained new members, too. (Even the library security guard who came out ended up agreeing with the MassResistance parents.)

It didn’t look like there were many people who came looking for the Drag Queen event. There were a few angry liberals who tried to intimidate them, but they refused to be intimidated by anyone. 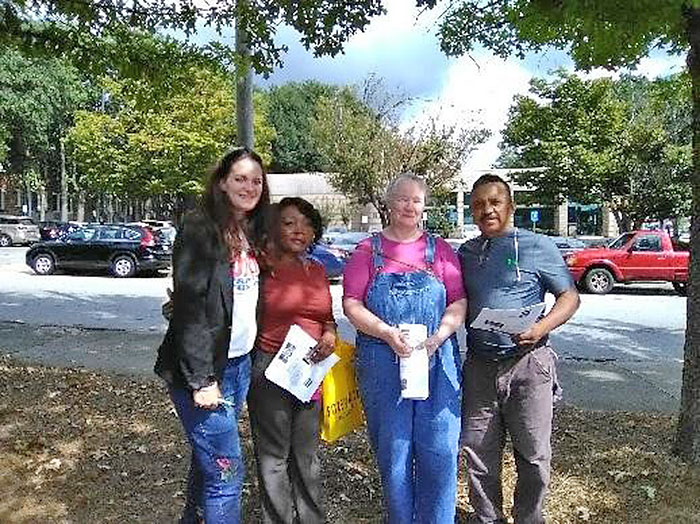 Some of the Georgia MassResistance activists outside the Ponce De Leon library.

Georgia MassResistance activists are not going to rest on this victory, they’ve told us. They will be out there passing out flyers, informing the public against Drag Queen Story Hour at other libraries in Atlanta.

They plan on connecting with college students and continuing their information campaign against the County Board of Commissioners to stop promoting the LGBT agenda to children.

It’s a message that politicians haven’t been hearing enough!

This is what the politicians are allowing in public libraries - and parents are outraged.