Two other pro-family sites also taken down and others threatened.

This is the next wave of anti-conservative assault: get ready for it!

We’re back up – using a fearless Christian web hosting company!

This cryptic message is wnat people saw when they went to the MassResistance website on Sept. 20.

On Thursday, Sept. 20 the MassResistance website was suddenly taken down by the hosting company, HostGator, reacting to frivolous “complaints” by a homosexual activist (a convicted sex offender – who molested a minor). People who tried to access our website were met with a cryptic message but no further explanation.

By Friday evening we were back up and running. We have moved our site to a web hosting company run by a fearless Christian. But our email was affected right up until today.

The same activist had recently taken two other pro-family sites down by “complaining” to other companies. And other sites (including a major pro-family news site and a talk radio site) have been seriously threatened with shutdown.

Looking back, something like this was inevitable. First it was conservatives being banned by Facebook. Then Twitter and YouTube. PayPal and some credit card companies also started banning conservative groups. All of these were the result of pressure by left-wing and LGBT activists – and liberal companies enthusiastically complying.

According to one Internet company executive we spoke to, the next wave of attacks against pro-family conservative groups is beginning: Internet companies shutting down entire websites of conservative groups using the excuse of (frivolous) “complaints” by left-wing or LGBT activists. “It’s so easy that it’s frightening,” he told us, referring to the recent shutdowns. “Internet companies cave in very quickly because they’re full of liberals anyway, and one customer among thousands means nothing to them.”

In many of these cases, the companies just provide "throughput" services for the web companies and have no legal liability for the content. But they all seem to have "terms of service" clauses which allow liberal activists to exploit (e.g., claiming "hate speech") and the companies simply cooperate with them.

HostGator is a large web hosting company headquartered in Houston with thousands of customers. They completely sided with the homosexual activist.

The homosexual activist behind these attacks is Adam Flanders, who lives in California. Flanders has a long history of fraudulently referring to US Copyright laws and company policies to attack pro-family websites.

MassResistance tangled with him before. Back in 2007, Flanders lived in Maine. He wrote an article in a local newspaper admitting that he and other homosexual men had sexually abused underage boys at a local LGBT “youth” organization. (We had been warning parents about this kind of thing.) Flanders was subsequently convicted of sexual abuse of a minor. We posted documentation on his case to illustrate the general threat to families from LGBT "youth" organizations and adult activists. 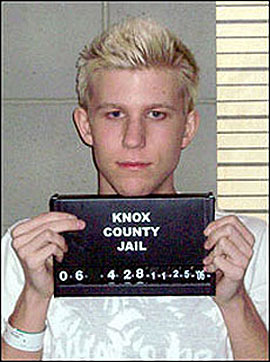 Adam Flanders at his arrest. He makes the ridiculous claim that he owns the copyright to this police photo. And Internet companies don't question it at all, because of his "LGBT" credentials.

In 2012, Flanders filed several frivolous lawsuits against MassResistance claiming “damages” by us for posting what was public material about his case. That is a common intimidation strategy. We were doing nothing illegal, and all of his lawsuits failed. Since then, other groups have re-posted our information.

In his current attack, Flanders targeted the material about him on our website that we had posted back in 2012. But keep in mind, a complaint could have come from any homosexual or left-wing activist on virtually anything posted on a pro-family site.

The whole experience with HostGator was Orwellian. First they claimed our site was taken down due to a copyright violation. Then they changed their mind and said it was about “personally identifiable information.” Then they simply stopped communicating with us entirely.

Here’s the series of events:

On Sept. 19, the HostGator Legal Department sent us an email saying that this activist had complained to them, and they presented us a list of 25 links to the MassResistance site of postings, photos, and documents that were deemed to be violations of the US Copyright laws. The activist was the copyright holder, they said. We had 48 hours to either take them all down or have a lawyer create a “valid counter-notification” for each alleged violation, and submit that to them.

But Sept. 19 was the Jewish holiday Yom Kippur, so we did not check our email. By the time we got around to it the next day, Sept. 20, the site was already taken down (i.e., we didn’t get the 48 hours to respond that they promised).

We emailed the HostGator Legal Department. We pointed out that none of the alleged violations could possibly be copyrighted by the homosexual activist. They were all either court documents, newspaper articles, a police mugshot, documents received from the government, or similar material.

On Sunday, Sept. 23, we got an email from the HostGator Compliance Department. They were no longer claiming that we were violating any US Copyright laws, they said. Instead, they said, in that list of 25 links we are violating their company policy on “Personally Identifiable Information:”

Here’s how they define that:

"Personally Identifiable Information is information that can be used to distinguish or trace an individual’s identity and is not otherwise publicly available. Such information may include:

We immediately informed them that all the material in that list of links with any “information” was publicly available on court websites or other government sources. And it was years out of date. These things are on websites all the time.

We also challenged HostGator’s bizarre rule that simply posting a person’s photo with a name constitutes violation of HostGator’s “personal identifiable information” policy, prompting a possible takedown of the site. Every news site in the world does this, plus millions of other websites. It gives HostGator a reason for taking down any site.

After that, HostGator stopped communicating with us, and our site there has remained completely blocked.

Moving to a Christian-run host company

As soon as we discovered that our site was blocked, we called our friends at Altha Technologies in Maine. The company is run by Jared Heath, a fearless Christian ex-Marine. Altha Technologies is a “super” hosting operation that has security and protections far above the average shared-hosting company. Jared told us that he would not back down to any phony threats by the Left.

These guys don't back down, ever.

He told us that he personally knew of four pro-family websites that have recently been targeted besides MassResistance. Two of them, LifeSiteNews.com and Dr. Michael Brown’s page, have weathered the attacks so far. The other two, including AmericansForTruth.com were taken down by their hosting companies – and so they moved to Altha.

And as a result, Altha’s also been under attack by the LGBT movement. They threatened his Internet supplier, causing them to break their contract with Altha. Altha’s data center got scared and decided to stop doing business with them. But Altha has come up with solutions to stay up and running!

MassResistance immediately began the process of moving our site to Altha. After a day we were back up. But it’s been a bumpy road, and our email took days to start coming properly.

However the move to Altha is worth it to us. It will hopefully provide a good long-term solution. Given the vicious political climate among Corporate America against conservatives, fearless companies like Altha run by really smart technical people who solve problems fast are the wave of the future.

A big problem on the horizon

Make no mistake. These attacks on the MassResistance and the other websites are only the beginning of a coming larger wave of website takedowns by the Left and particularly the LGBT movement. They know that the Internet companies are virtually all run by liberals and cowardly to boot.

This is bigger than most people realize. HostGator is owned by behemoth Endurance International Group, which owns a large percentage of the web hosting companies in the US, including Blue Host, Site5, and literally dozens of others. They aim to be like the Facebook and Google of Internet Hosting. This is what we’re all up against.

It will likely continue to be a bumpy road for the MassResistance website as Altha moves to a new data center. We are committed to keeping our information available to you, no matter what it takes.

WE NEED YOUR HELP! This caught us in the middle of a huge push of activism across the US (which we will be reporting on over the next few days). The disruptions and other costs from this shutdown have been an put a terrible hit on our financial resources and have disrupted other crucial activity.

We have an emergency $25,000 campaign to bring us back to fighting strength. By donating here you will be an extremely important part of the pro-family fight in the trenches! We will ALWAYS be on the front lines for you!