Local activists engage Low at 4 events in his district, including Christmas party. He runs away twice!

THIS is how pro-family lobbying works! 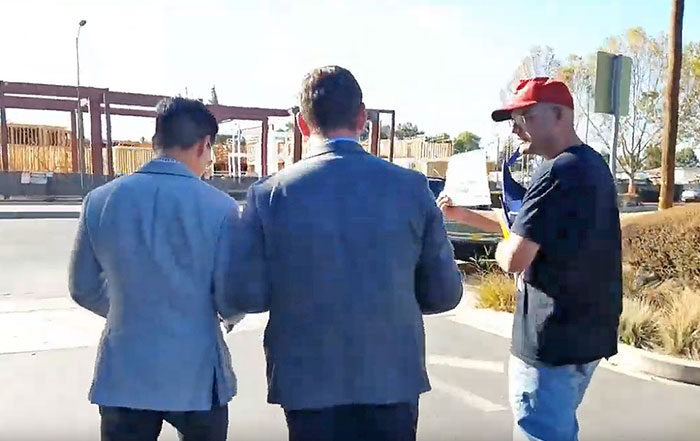 California State Assemblyman Evan Low (left) and aide (center) ran out of his own event to avoid talking to MassResistance about his bill. But Arthur Schaper didn't give up!

The Left knows that politics never stops. But most pro-family groups energize their members and volunteers for specific fights, then retreat once they accomplish the victory. Not MassResistance. After we stopped the worst anti-family bill in the country, we’re continuing to make sure that the bill’s sponsor knows that it’s not wanted back. At every public event (four so far!) he’s getting the message.

Last summer, California MassResistance launched a legislative offensive to stop a terrible bill in one of the most liberal, most pro-LGBT legislatures in the country: California. Many people are greatly helped by therapy for unwanted sexual orientation or gender identity issues. If passed, Assembly Bill AB 2943, would have deemed such therapy a fraudulent practice, and held therapists and practitioners criminally liable for offering this service. It would even prohibit communication on such therapy, including sermons, recordings, and classes. People needing this critical help would have no place to go. Legal groups said this could include even Bible verses.

By August the bill had easily sailed through the State Assembly and the State Senate, and just needed a final procedural vote in the Assembly. At that point most pro-family groups gave up the fight, since they were convinced it would pass, and the Governor had said he’d sign it.

But California MassResistance stepped up our efforts in a big way, conducting one of the most relentless statewide campaigns ever, particularly with Assembly members in swing districts. MassResistance leaders made it clear that this legislation would be a lose-lose for their side.

As a result of those intense efforts, the bill was ultimately pulled at the last minute. It was stopped! However, the bill’s author, Assemblyman Evan Low (D-Cupertino) told his supporters that he would likely introduce a similar bill next year. Low, an openly "gay" activist before getting elected to the State Assembly, is committed to the LGBT agenda. He pulled the bill only because he knew he no longer had the votes to pass it in that session.

California MassResistance activists regroup and get back into the fray

The MassResistance activists up and down the state had achieved an incredible victory, but they know that the LGBT Lobby never rests.

So we need to make sure that Assemblyman Low knows that the pressure will continue against this terrible bill.  “We want to make sure he understands we had not gone away. We have remained awake and are well-aware of what is going on,” one of our CA MassResistance members told us.

On Sept. 24 the Assemblyman hosted a “State of the District” meeting in San-Jose Campbell. It was to tell his constituents about the great job that he had done for the district, which takes in most of the South Bay region of the San Francisco Bay Area.

As people came to the event, MassResistance was there to greet them!

California MassResistance members in his district and in other parts of the state showed up to share their views on his push to ban this important therapy.

Inside the event. Our people aren't shy!

During his PowerPoint presentation, Assemblyman Low prided himself on the very legislation he had pulled, AB 2943. His MassResistance constituents booed him for promoting such a distasteful bill. He would have gotten away with that misleading record of “accomplishment” if our people had not attended the meeting.

It’s important to be bold, not timid. One of our members later told us: “At first, they wouldn’t allow us to bring in signs. But we stood up to them. ‘Call the police,’ I told the district director. ‘He can then educate you about our rights.’” The staffer had to relent, and MassResistance activists attended the meeting without further incident. 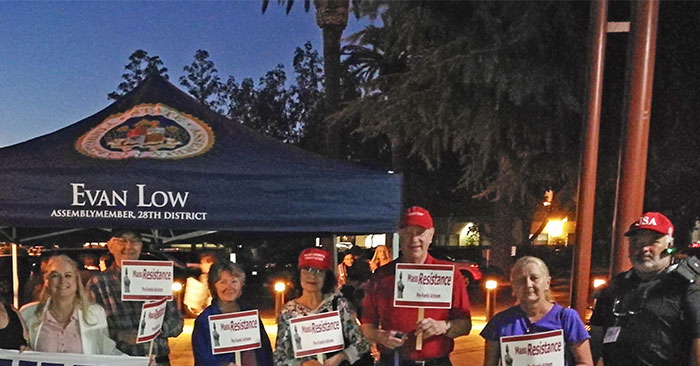 A lot of our people stayed to the very end.

Assemblyman Low advertised he’d be at a coffee shop in San Jose on Oct. 4 to talk to constituents if they wished to show up. And so our people took him up on the offer!

In order to support our Northern California contingent of MassResistance activists, Arthur Schaper, MassResistance’s Organization Director, also joined them – and brought a copy of our book The Health Hazards of Homosexuality as a gift for the Assemblyman. He declined to accept it. 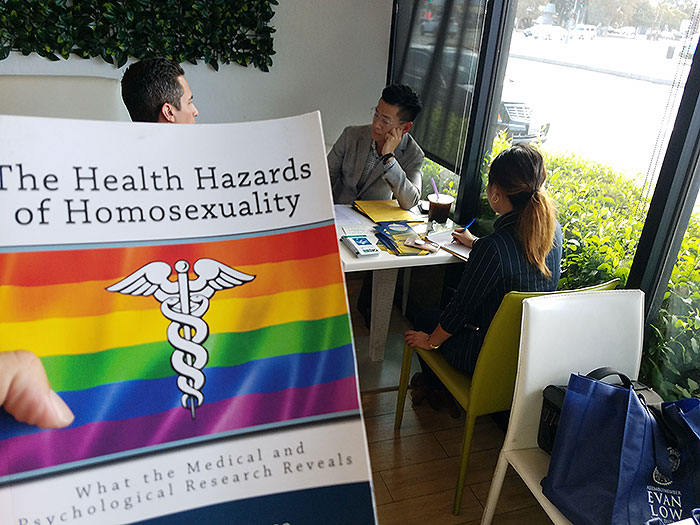 A MassResistance activist prepares to offer our book to Assemblyman Low (seated at table, facing toward the left).

A few members of the group started out by speaking with Assemblyman Low about their opposition to the comprehensive sex-ed curriculum being forced onto children in local schools.

One woman told the Assemblyman that children should not be taught about homosexuality or other unhealthy sexual behaviors. There was simply no place for that kind of “instruction” in the classroom, she said. Another woman was very vocal about the “transgender” agenda in her young son’s local school. 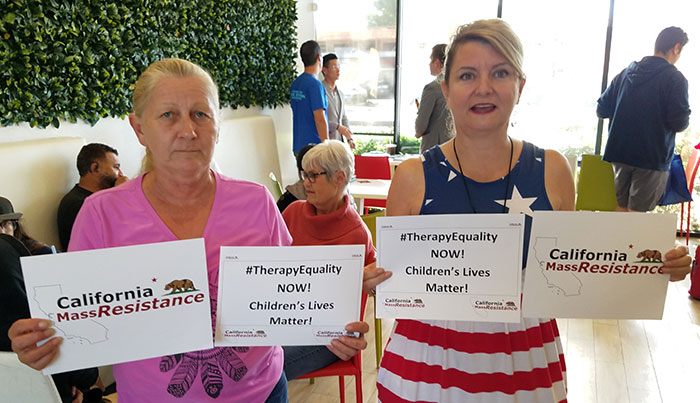 Making sure he gets the message. (Low is next to window facing right.)

Finally, California MassResistance leader Arthur Schaper sat down with Low. As Arthur began to talk with him, one of the other MassResistance people began to video the conversation. But instead of listening to Arthur's concerns, Low told Arthur that he refused to be recorded. Arthur insisted that they had a right to record the conversation, since Low was a public official and it was a public meeting that Low had set up.

One of Low’s staffers tried to stand in front of the woman doing the video, to block it. But when that didn’t work, Low got up and walked out of his own meeting, with Arthur following him and attempting to engage him about Bill 2943.

Here is the video of that encounter:

Low drove off, leaving his own event.  But without question, we had made our point. Once people start confronting their elected officials with legitimate questions, and want their answers on the record, the officials often have no idea what to do! It is so important for members of the public not only to hold elected officials accountable, but to record the encounter. 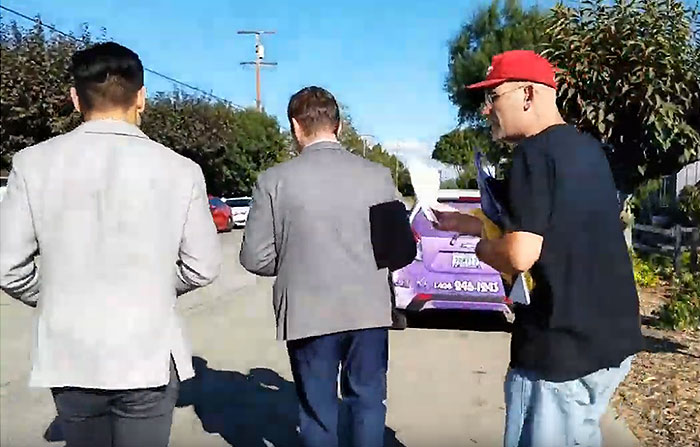 Rather than answer questions on video, Low (left, with aide) simply ran out, with Arthur behind him.

The next day, Assemblyman Low hosted a Senior Town Hall at the community center in Campbell, CA. Several MassResistance activists, including Arthur, attended this event.

Before the meeting started. Sign on chair at right says "Reserved for Evan Low."

About 15 minutes into his presentation, Assemblyman Low saw the MassResistance signs in the audience. He quickly ended his talk, darted off to the side to pick up some papers, and dashed for the exit – without taking questions or talking with constituents! 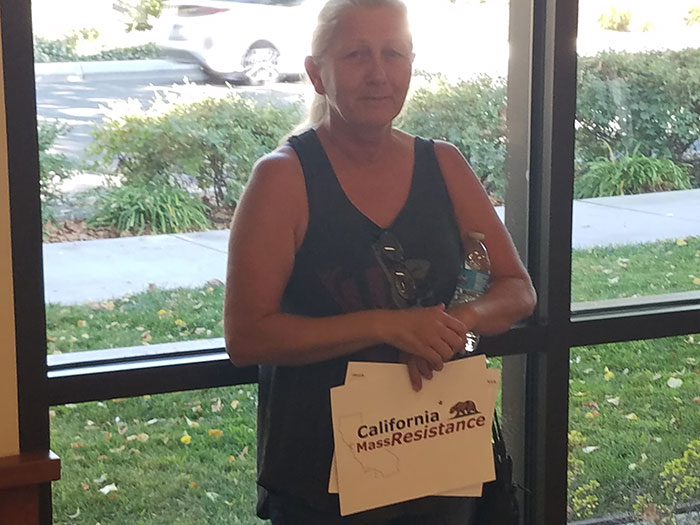 As soon as Low saw our signs, he ended his talk ...

Arthur followed him and repeatedly tried to ask him about the therapy ban. But again Low ignored him.

But MassResistance again made the point that this is a critical issue and pro-family people are not giving up on it. 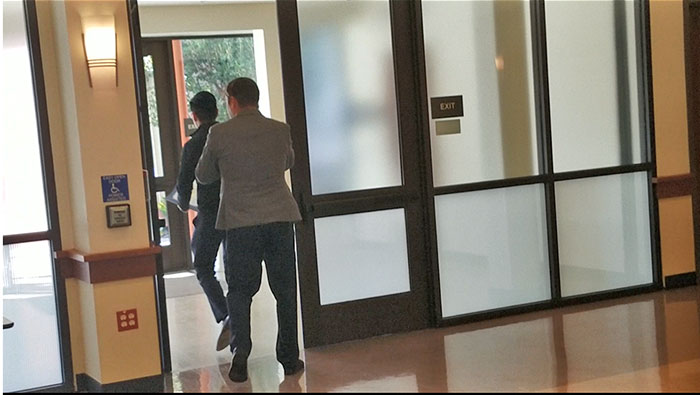 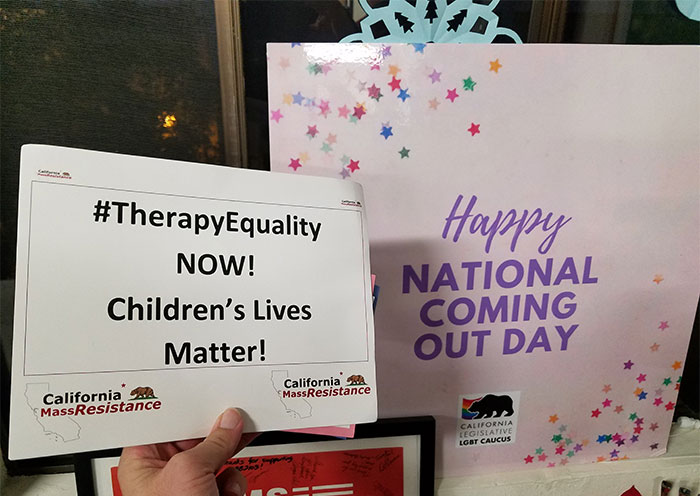 Not surprisingly, Low's office had more than its share of LGBT material prominently displayed.

Our people immediately noticed the larger than usual sheriff’s presence outside of the event. But the police were quite friendly with us and seemed to agree with our concerns when we talked with them. 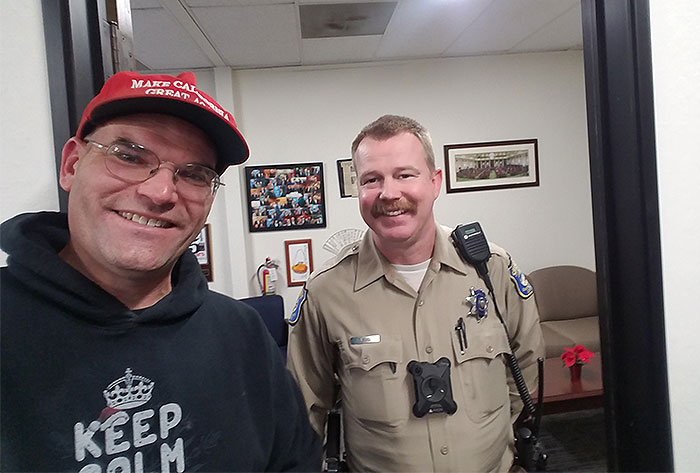 Rather than ask us to leave, the police seemed pleased we were there.

Right away, our people got busy making their concerns known.  In two previous encounters, Assemblyman Low had fled when this issue was brought up. This time, at his own Christmas Party, Low had nowhere to go. He recognized that we were not going to take “no” for an answer. So he had to listen to us, even though he didn’t respond with anything substantial. 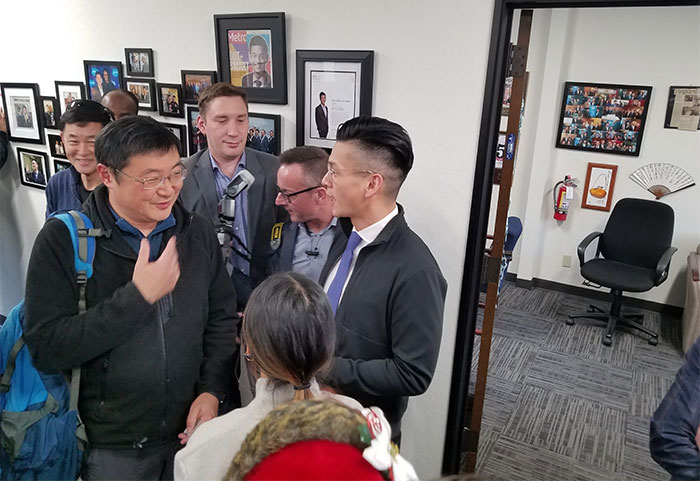 Assemblyman Low couldn't run out this time, so he was forced to listen to people.

As a Christmas present, one of our members donated a copy of Ellie Klipp’s children’s book, I Don’t Have to Choose – which helps children deal with the transgender lies they hear in school. We hope he appreciates it. 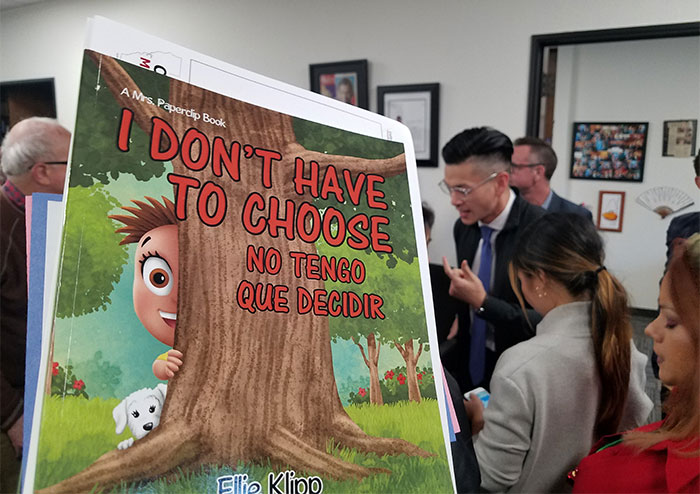 Donating a Christmas present to the office!

Among many failures, the pro-family establishment fails to keep up the pressure on lawmakers when they are not in session. It is vital for us all to signal to elected officials that we do not rest in our fight to protect faith, family, and freedom.

Assemblyman Low has received multiple visits and calls already. It will be interesting to see what he does regarding this incendiary bill when the new Legislative session starts. We will keep you posted about the Assemblyman’s moves going forward.