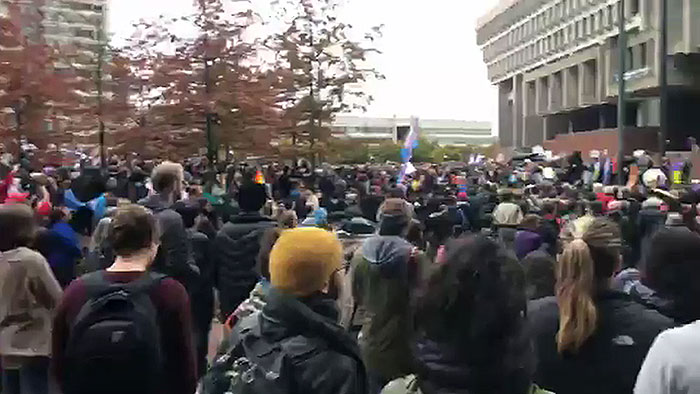 On Sunday, October 28, hundreds of pro-LGBT activists and supporters filled City Hall Plaza  outside Boston City Hall for a rally supporting the “transgender bathroom” law – and transgender behavior in general – in Massachusetts.

Labeled a “Rally for Transgender Rights,” it was called by Boston Mayor Marty Walsh, a longtime advocate of the homosexual agenda, to promote “Yes on Question 3” in the upcoming statewide referendum. A “yes” vote would keep in place the current “transgender bathroom” law in Massachusetts which covers all public accommodations. A “no” vote would repeal it. 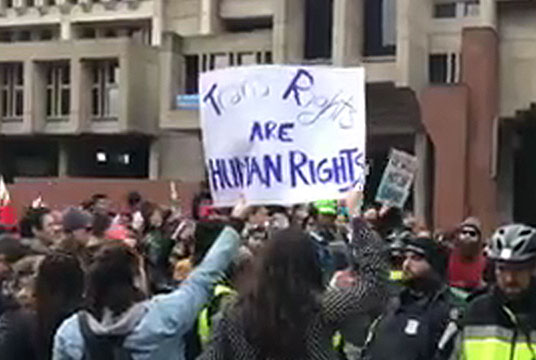 Also helping organize the transgender rally were about a dozen far-left groups such as the Democratic Socialists of America, National Center for Transgender Equality, BAGLY (an LGBT group targeting kids), Stonewall Democrats, and others.

The bizarre themes included calls for “basic civil rights” for cross-dressers, chants of “We will not be erased!”, and demands for “tolerance for all.” 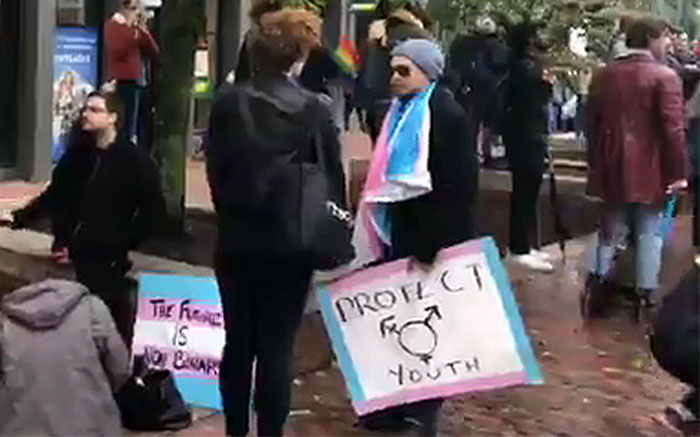 Actually, youth do need protection -- from these people!

Tolerance for all? Well, not quite …

MassResistance activists showed up with our own theme: the truth. It was probably the first time many LGBT activists had seen any push-back to their lunacy, and they didn’t exactly embrace us. But we didn’t care. Free speech is free speech, we say! 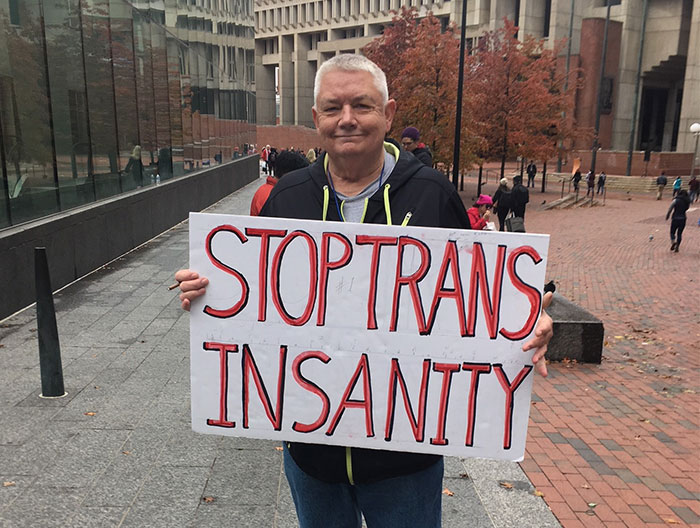 We definitely had a different opinion!. 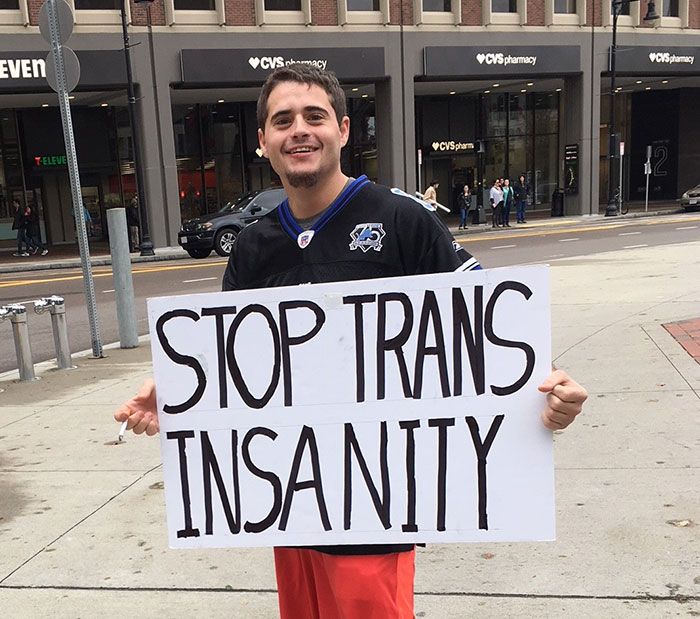 Moving into the crowd. 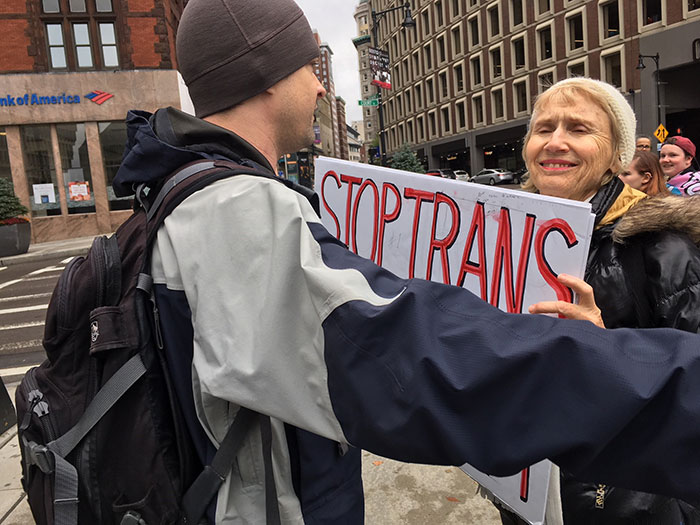 An LGBT activists literally attacks this MassResistance lady to block her sign. 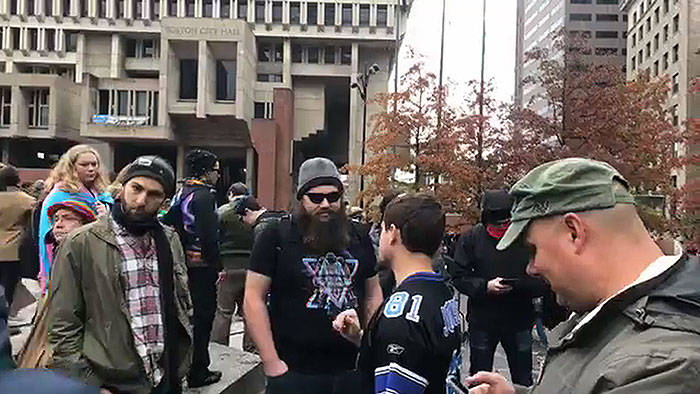 ... And they began to surround MassResistance activists (our people at right, in "81" shirt and green cap). 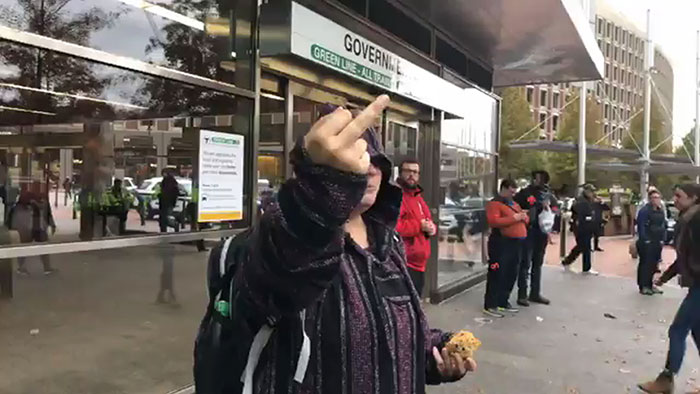 This is their method of debating.

The Mayor of Boston himself didn’t show up, unfortunately. (He was probably busy stumping for Elizabeth Warren.) But it appeared that lots of City of Boston employees were there to represent him. 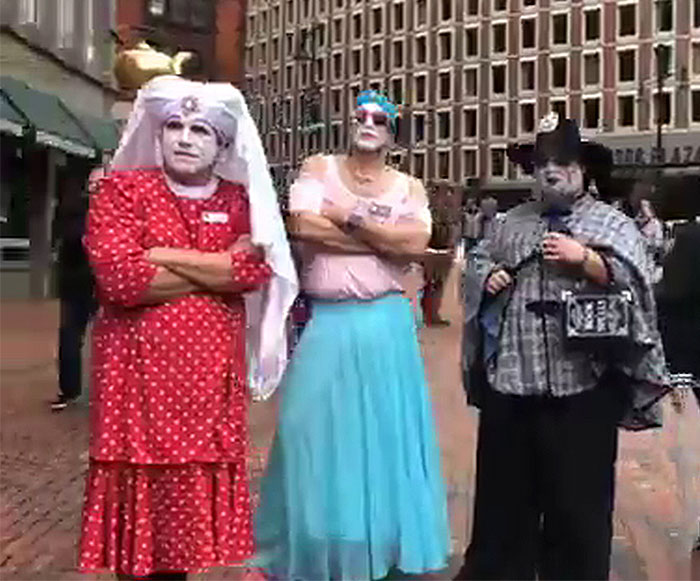 These three men were welcomed as "women" - and want you to be forced to do that also. 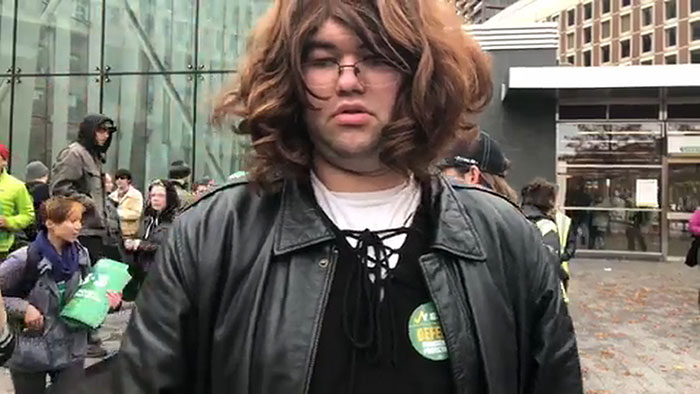 This man told us that the "transgender bathroom" law must stay in place, and that no compromise is acceptable. 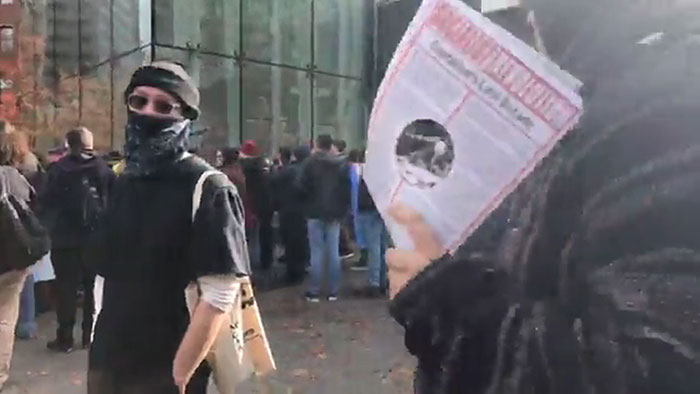 There were dozens of these "Antifa" types wandering around. But when the MassResistance people let them know they weren't afraid of them, they generally just slithered away.

In the end, they didn't like MassResistance's message, but there was nothing they could do about it. There were dozens of police around, and we weren't afraid of them, anyway. They always like to come and "protest" at pro-family rallies; we figured it was time they got a taste of their own medicine! Plus, it was good for them to hear a different message for a change.