Is it too late to hope the State Department swamp will be drained of sexual radicalism? 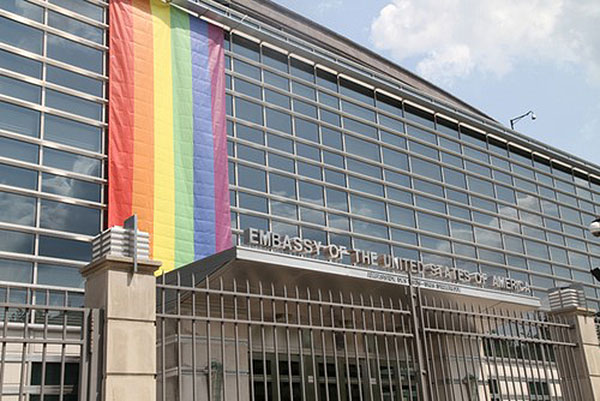 US Embassy in Ottawa, Canada.

The heart of our mission is the preservation of human dignity…  We are assuring human dignity by advancing one of our most cherished and indispensable liberties.  It’s enshrined in the First Amendment.  It is our religious freedom.

We’re glad there’s a new focus in this administration on religious persecution in other countries.  But what about when conservative Christians and Orthodox Jews (whether abroad or in the US) are labeled as bigots and irrational fear-mongers? Isn’t that religious persecution?

That name-calling is just what Secretary Pompeo did this past spring.  In May, he issued an official statement, “On the International Day Against Homophobia, Transphobia, and Biphobia.”  (Phobia means an irrational fear.)  He gave credence to the radical ideology deeming all forms of sexual and “gender” expression “human rights” and that any disagreement is irrational or hateful.

Then, he proclaimed June to be “LGBTI Pride Month”:  “The United States joins people around the world in celebrating Lesbian, Gay, Bisexual, Transgender, and Intersex (LGBTI) Pride Month…” (Note the acronym’s addition of “I” for intersex – a true biological condition, unlike the other self-proclaimed “identities.”) 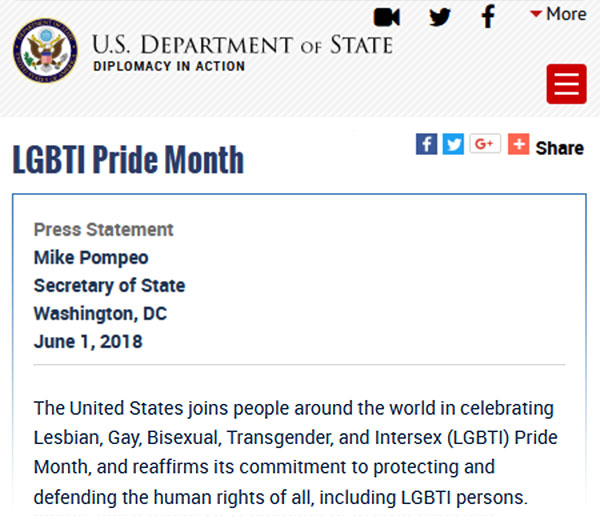 A press release like this would have been considered insane throughout most of our nation's history..

The celebration of all things LGBT has become totalitarian.  Sexual radicals now have the power to shut down websites, silence university researchers, and yank payment platforms from conservative groups.  They silence debate with charges of “hate speech.”  They push people to self-censor. 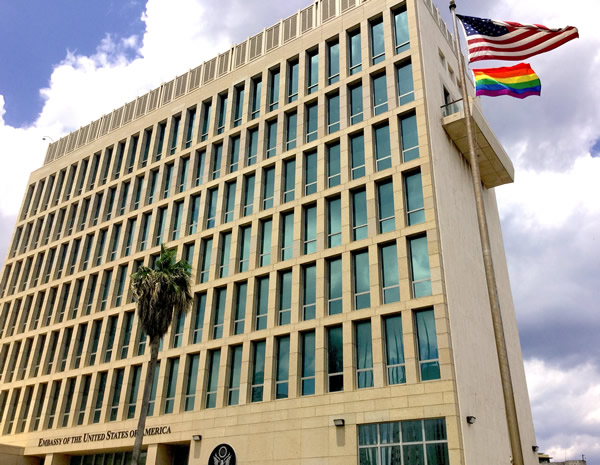 Moreover, we ask Secretary Pompeo:  How is it affirming “human dignity” to define persons by their sexual proclivities, or their denial of their own biological reality?  Is it dignified to publicly celebrate one’s engagement in sodomy?  Is it dignified to impersonate the opposite sex and demand access to opposite-sex facilities?  Is it dignified to seek one’s own chemical and surgical castration? Is it irrational “homophobia” or “transphobia” to be concerned about these issues?

Yet Pompeo apparently believes the State Department is promoting “human dignity” when it officially supports vulgar LGBT pride events and flies the rainbow flag at our embassies.

Pompeo’s recent proclamations were no doubt authored by the still powerful LGBT lobby in the State Department.  They are pure sexual-radical propaganda.

His May statement exaggerates the plight of so-called “sexual minority” persons around the world.  “Fear and bigotry are enshrined in laws that criminalize LGBTI status or conduct in more than 70 countries. In some, being LGBTI is punishable by death,” Pompeo said.

But in fact, as even a major international LGBT group admits, harsh penalties targeting LGBTs  (including the death penalty) that are “codified under Sharia” are often “not known to be implemented.”  In some areas, a penalty such as stoning “applies broadly for adultery, rape … incest … and homosexual sodomy” (and not just homosexual acts).

Only recently have “LGBT rights” – i.e., all forms of sexual and “gender” expression – been declared “human rights” by radical activists. So, it’s a stretch to claim that the 72 countries criminalizing “same-sex acts” are violating “human rights.”

Why is it acceptable for Pompeo’s State Department to attempt to force acceptance of this new “LGBT rights” ideology on the majority of countries around the world that dissent? Why does LGBT cultural imperialism get a pass?

Do the pro-LGBT views of the State Department represent most Americans?  No. Pompeo’s incendiary vocabulary (homophobia, transphobia, biphobia) smears a majority of American citizens as irrational, deplorable bigots. The evidence:

When our citizens were still allowed a voice on same-sex “marriage” (before the Supreme Court’s 2015 overreach in Obergefell), voters had banned it in a majority of states.  Congress has never passed an LGBT anti-discrimination law (though the Obama administration pushed the EEOC to interpret broadly the existing law against “sex discrimination” in employment, to include sexual orientation and gender identity).  And only 20 states (plus D.C.) currently have laws banning discrimination on the basis of both “sexual orientation” and “gender identity.”

So, where’s the public mandate for our State Department to push radical sexuality on the world?

Sadly, Pompeo inherited a Department of State that has been promoting “LGBT rights” around the globe for quite some time, with a huge push occurring under the Obama administration.  LGBT staffers apparently have tremendous power, with employee lobbies and support within the bureaucracy.  Rainbow flags are still flown at our embassies.  Pride events in DC are officially recognized by the State Department.  UN Ambassador Nikki Haley recognized 2018 “LGBTI” Pride month. 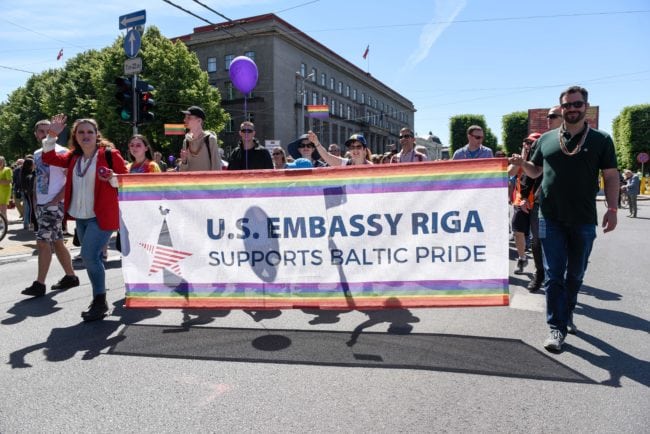 US Embassy personnell marching in the street in Riga, Latvia, this past June.

The Deputy Secretary of State, John J. Sullivan, expanded on Pompeo’s June statement dignifying “LGBTI Pride Month.”  He noted the Secretary’s “pledge to create a more diverse and inclusive Department of State.”  He called for mandatory pro-LGBT re-education of all department employees:

In 2009, this Department extended workplace protections against discrimination to all of its employees, and more recently, has advocated strongly for employees’ families to better facilitate their service abroad.  As a Department, we continue to seek greater diplomatic recognition for the families of LGBTI employees.  We know that in many countries, this is a challenge, but if an employee is ready and willing to serve in a country where they may face hardships, our support of their service and sacrifice should be matched by the way we advocate for them and their families.

FSI [Foreign Service Institute] has also created the online training course “LGBTI at State” … to increase awareness among the entire workforce about issues and sensitivities related to the LGBTI community.  I encourage everyone in the Department to take this training, in fact, I insist upon it…

It can be argued that all this goes against our nation’s values.  So why didn’t Family Research Council challenge Secretary Pompeo on this issue, rather than focusing on global religious freedom at their recent event?  Have they abandoned their 2017 demand for Trump “to launch a major purge of pro-LGBT diplomats inside Foggy Bottom”?

Our policies in foreign lands should reflect our nation’s values, as far as they can be discerned by laws enacted by the people’s representatives – not the rantings of radical special interest groups.