Up against aggressive pro-LGBT politicians and deranged LGBT activists.

After months of battling: In the City Council chambers, in the streets outside of public library, and beyond.

Part 1 of 3: The battle in the city council chambers 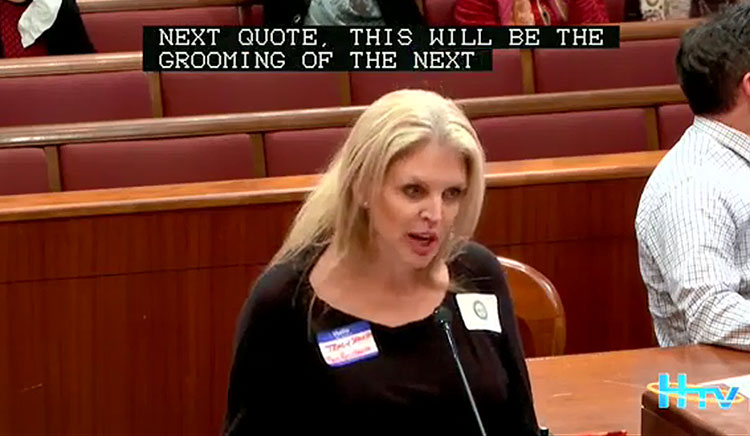 Tracy, a mother and a leader of Houston MassResistance, unloads before the Houston City Council about the depravities of their "Drag Queen Story Hour" events. This photo is from the city's video.

The Houston, Texas city government is among the toughest venues in America to take on the LGBT movement. Back in 2015, the city politicians passed a transgender law that was so radical it lost a subsequent city-wide referendum vote — even though Houston is a deep blue city. Since then the politicians and LGBT activists — along with the ultra-liberal media — have become even more radical and aggressive.

But it’s not too tough for our fearless Houston MassResistance group, run by a mother (Tracy) and a grandmother (Linda) who back down to no one! This group is truly amazing.

After a three-month battle by Houston MassResistance, they were a major part of causing the “Drag Queen Story Hour” to move out of the public library!

Starting in 2017, the Houston City Council has supported a series of “Drag Queen Story Hour” (DQSH) events in the Freed-Montrose branch of the Houston Public Library. (The city council oversees the library operations.) As we’ve reported, these programs are organized around the country and feature homosexual men in flamboyant women’s clothes – and often garish makeup – targeting very young children. They say it’s about “self-expression and diversity.” But the stated purpose is to get children to feel comfortable with LGBT behaviors at a very early age.

In Houston these events are worse than in other places. The “Drag Queens” seem to come from the “gay” nightlife scene – more overtly perverted and clearly dysfunctional than other Drag Queen Story Hours around the country. It’s any normal citizen’s nightmare that public facilities are being used to do these things to children. 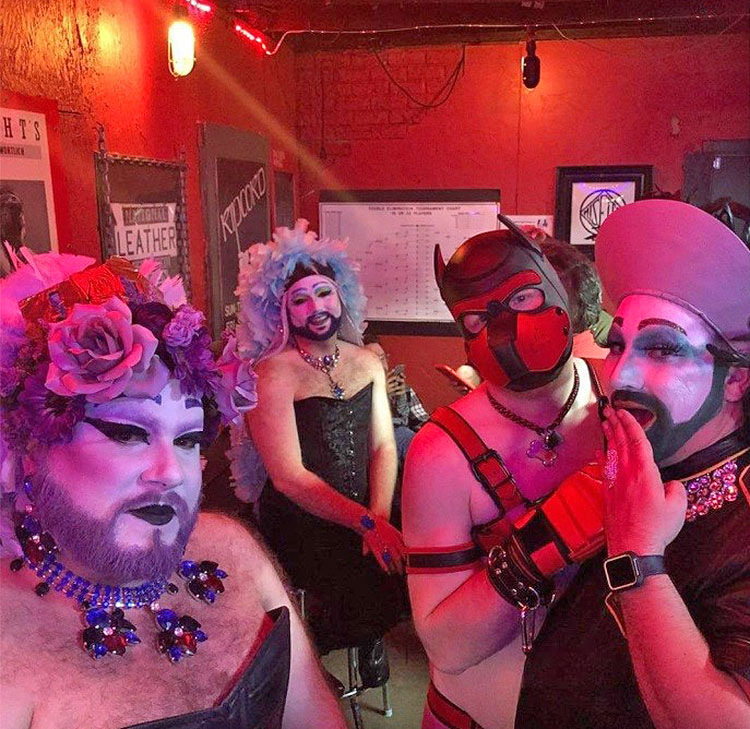 Also in July 2018, the Houston-based pro-family group Conservative Republicans of Texas began an aggressive information and media campaign to inform people about the Drag Queen events in Houston and how destructive they are. They also started a city-wide petition. The information campaign went up until election day in November.

It caught the attention of the media. In July, 2018, the pro-LGBT local Fox TV affiliate did a (very biased) report on the controversy, which included a short debate between an LGBT activist and Michael Kubosh, a member of the Houston City Council who publicly opposes the event.

In October, three pro-family activists filed a lawsuit against the Mayor of Houston and the library director to stop the Drag Queen Story Hour events. The lawsuit was thrown out by a biased judge (who reportedly has a "gay" daughter and whose family had donated money to the library), but the activists are appealing that ruling.

The Drag Queen Story Hour controversy continued through the fall of 2018, but the city council and library refused to change anything.

In November 2018, Houston MassResistance jumped in and got involved. They decided to take the fight directly to the city council politicians. Tracy, Linda, and others began coming to the Houston City Council meetings. 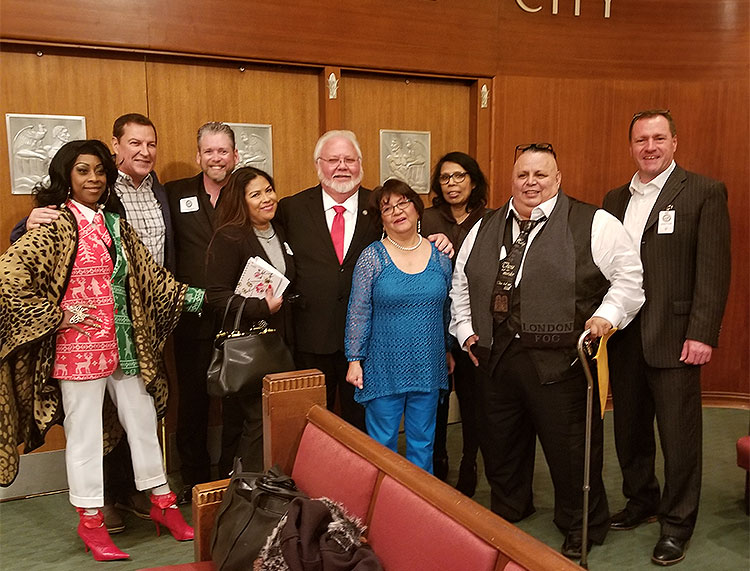 Tracy took this photo of some of the MassResistance people outside the city council chambers. The man in the red tie posing with them is City Councilor Michael Kubosh, who publicly opposes the Drag Queen event.

They handed out information. They testified during the weekly public comments sessions. They told it like it was and they didn’t hold back! 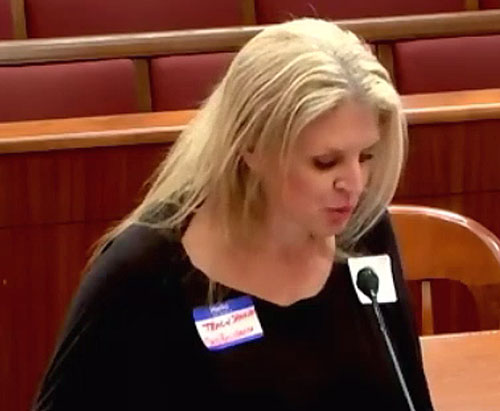 Tracy: "Adult entertainers who perform in nightclubs and have dollar bills into their bustiers at night should not be held as role models for young children. We are to believe that there is no agenda other than reading to children and promoting acceptance. But here’s what the organizers say: 'The program is aimed to provide positive and unabashedly queer role models.' A drag queen story hour reader said, 'This will be the grooming of the next generation' What do young children need queer role models for? … The seeds of gender confusion are being planted at Drag Queen Story Hour. So we must know more about the transgender community. Their suicide rate is as high as 40%. Their rates of drug and alcohol abuse soar above the general population." 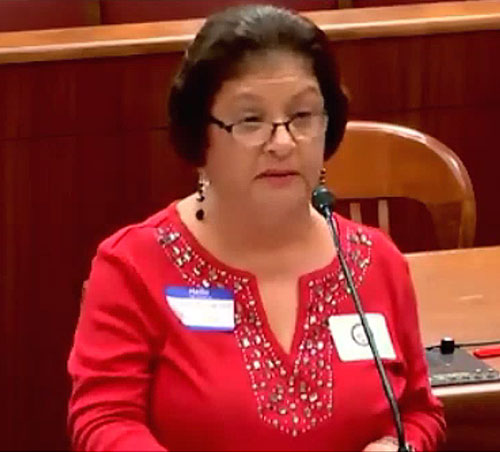 Linda: "This is a form of brainwashing… There are consequences to the homosexual lifestyle which are psychologically harmful, physically and emotionally destructive to children. Do you want this, Mr. Mayor and Council? Children need role models – not drag queens." 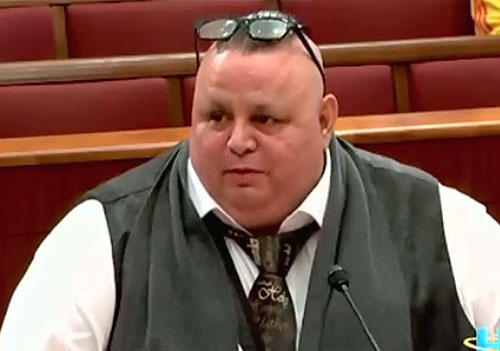 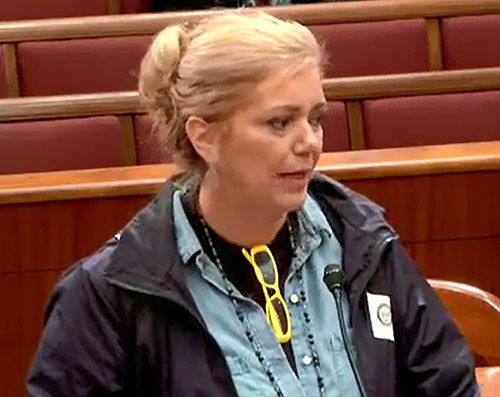 Mother: "If I did something bad to my children, I would be in jail. And it is an abuse that these parents are taking their children to this, and that the city is funding this. Yes, it is funding this. Doesn’t matter what the mayor says, this is a public forum. Their agenda and what their motto is, is grooming the next generation. It’s trying to desensitize them."

The pro-LGBT mayor and city councilors also became more than a bit unnerved, and reacted to the comments by the Houston MassResistance people with the usual vitriol, arrogance, and illogical arguments: 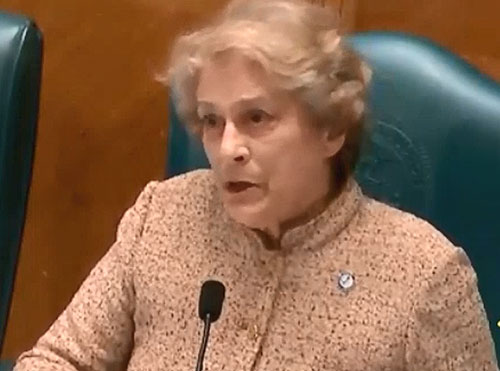 Ellen Cohen, city council member: [The most offensive.] "The people that you need to be worried about attacking your children or sexually assaulting your children are the people next door, the ministers, and the religious leaders." 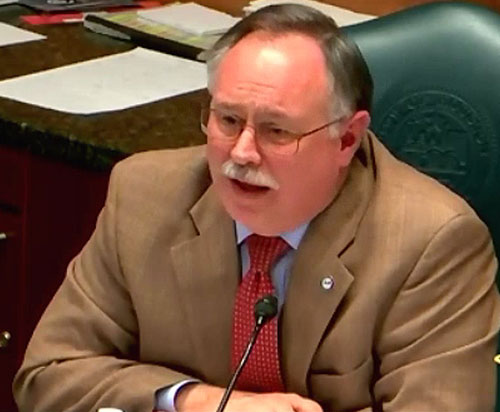 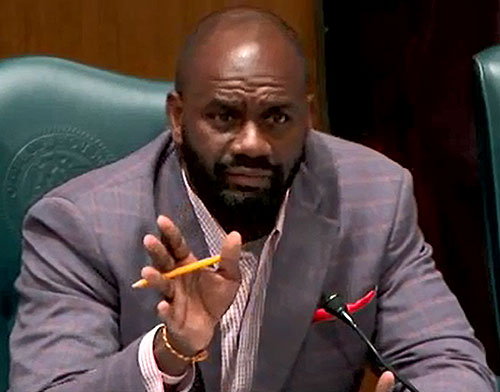 Jerry Davis, city council member: [The stupidest.] "As a black male, when you want to deny someone a right, I get a little bit cautious about that. I get a little sensitive about that. When you want to use the Bible to deny someone the right. They have feelings, too. They have rights, too. I hope that we’re not trying to persecute someone. Because it sounds like that’s like that’s what we’re doing." 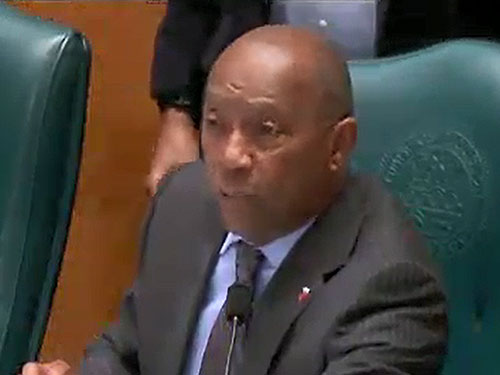 Mayor Sylvester Turner: [The boldest lie.] "This is strictly a volunteer program. There are no city tax dollars that are being invested in this program." 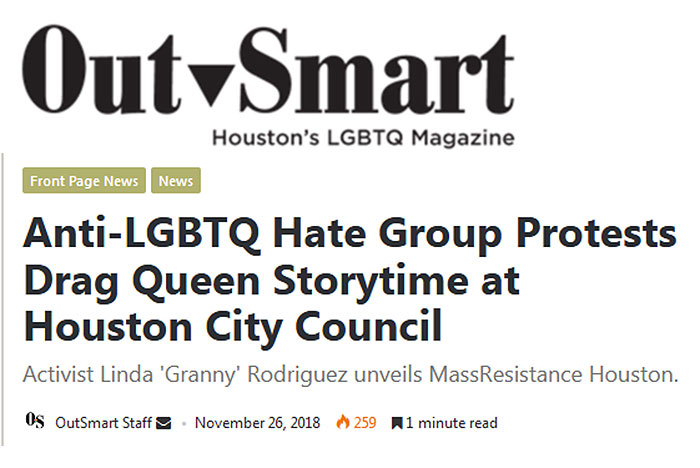 When they found out that MassResistance was involved, the local homosexual news magazine had the expected infantile reaction.

And of course the local LGBT activists themselves were apoplectic that pro-family mothers would come and confront the politicians so boldly. When their attempts to get to children are threatened, they seem to get the angriest. They started coming to the city council meetings to try to intimidate the parents. Some of the men in women’s clothes even went into the female restrooms at the library when the pro-family women went in. 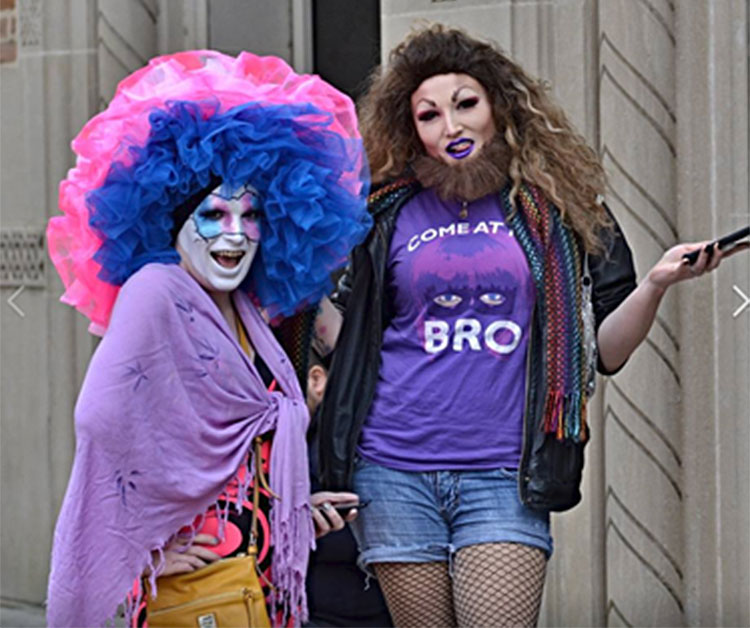 We were told that these two men went into the ladies' restroom when one of the MassResistance mothers was in there - and it was a terrifying experience!

The LGBT activists also attempted to do a series of vile and disgusting social media attacks on the MassResistance mothers. This is not an uncommon tactic for LGBT activists to use; much of it owes to their own psychological issues. But these MassResistance parents are very strong, and didn’t let it stop them!

Social media attack on Tracy. This is an example of the unhinged mindset of the LGBT "community" when someone has a different opinion about their activities with children. Remember - these are the people who want to teach YOUR children.

This was only the first round from the Houston MassResistance group.

Coming up:
Part 2:  The parents confront the library - and turn up the heat even higher!
Part 3:  How the city council and library finally caved – and what’s next.