Will you help us continue to fight the good fight?

Twenty-six years ago, we started out in one city. Now the sun doesn’t set on MassResistance activism! We are fighting battles across America from Massachusetts to California, and in Australia, Hong Kong, Taiwan, Canada, the UK, Nigeria, and more. 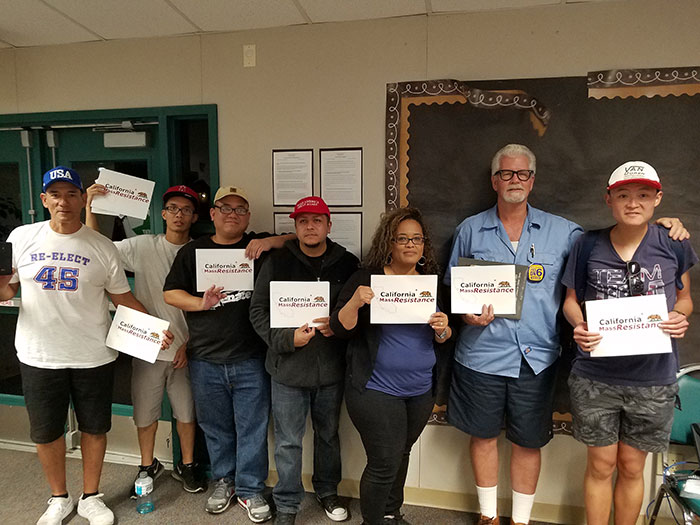 Parents hold up their MassResistance signs at a school board meeting in Anaheim, CA.

We are the only organization boldly confronting the LGBT lobby targeting children. In schools across America, teachers, administrators and school boards continually push LGBT propaganda on our children. And they let LGBT activists indoctrinate them. MassResistance is equipping parents to confront this behemoth head on.

Under the guise of “diversity and tolerance,” Drag Queens (homosexual men dressed as women) are reading books to children in libraries across the country. We are helping parents put a stop to this!

The Houston Public Library’s “Drag Queen Story Hour” was exposed by MassResistance: Two convicted pedophiles were involved in that program! One was reading to children, and one was greeting them as they arrived. The library director was forced to apologize to the community — and after more pressure shut down the event. By fearlessly confronting the elected officials and library employees responsible for these events, we scored a big win. Even Fox News reported on this:

Stopping anti-family LGBT legislation — even in “blue” states. MassResistance does the kind of no-holds-barred lobbying that other pro-family groups are too timid to do. It works. We stopped a horrific anti-therapy bill in California last year, and then kept it from being re-introduced again this year.

And because we're so effective, we get calls and emails nearly every day from anguished (but energized) parents and citizens wanting our help fighting back. Often, they want to form a new MassResistance chapter in their region!

We are getting things done...but we need your help to continue these battles!

There are many well-funded “conservative” and “pro-family” groups. But with all their millions of dollars, most of them don’t even come close to accomplishing what we’re able to accomplish on a very limited budget. They simply don’t do the kind of on-the-ground confrontation that MassResistance does. While other groups are writing scholarly papers and putting on fancy galas (and too often compromising with anti-family organizations), we are hitting the pavement and making things happen!

LGBT groups rake in hundreds of millions of dollars from corporations and wealthy donors. Help us fight this Goliath!

Make no mistake: Without our style of pro-family fighting, the culture war will surely be lost.

We need your help reaching our $250,000 fundraising goal!

This is a fraction of what other “establishment conservative” and LGBT groups get from their high-profile donors. But it will allow us to remain a formidable opponent in the pro-family fight! Although we have lots of volunteers, there are many expenses (paying our small but extraordinary full-time and part-time staff, keeping the office open, etc.). But just to keep up, we need to hire a few more people and pay for computers, supplies, travel funds, etc.

With your financial contribution, we'll continue to fight for you!

We rely on individual donors like you. No foundations help us. No corporations fund us. We are not bankrolled by wealthy businessmen. Just regular people like you, who value truth and righteousness. People who want to stand up for common sense and family values.

Effective pro-family activism is in grave danger of extinction. Will you help keep it alive?

VIDEO: How MassResistance fights for YOU (1 min 17 sec)