Lessons in how to become a “drag queen”

Parents harassed by both local police and rabid Antifa activists 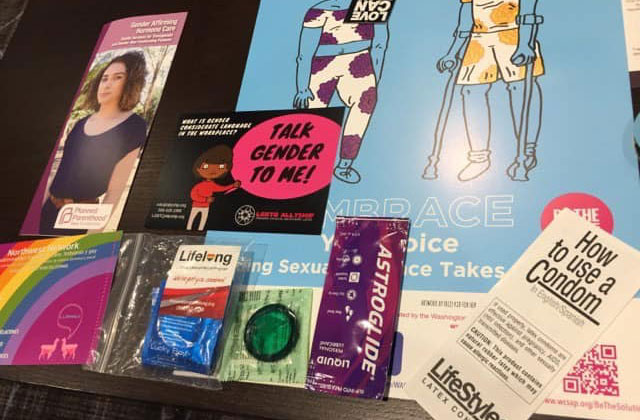 Here's just a part of what they were giving out to the kids. Yes, it's all about homosexual sex, transgenderism, drag queens, and more.

Have you ever wondered what REALLY goes on at “gay” high school and middle school clubs and other “youth pride” programs for schoolchildren? We’re constantly told that it’s all about tolerance, anti-bullying, “AIDS education,” and especially feeling “safe.” We’re told that we must trust the adults running these events – who are unsupervised and lacking background checks. Virtually all of these programs take place at schools or offsite locations where parents (and the public) are easily excluded.

The short answer is: It’s a nightmare – and it’s anything but “safe” for children!

But on Saturday, June 22, the local LGBT groups in Renton, WA scheduled a “Teen Pride” event at the local public library.

In early June when some parents in Renton first noticed the library promotion for the “Teen Pride” event, they were very worried. Among other things, it advertised “safer sex presentations” and a “drag show,” as well as an introduction for kids to local LGBT organizations. They also were shocked that it was advertised for “teens and tweens.” This can include children as young as 9 years old and as old as 19. 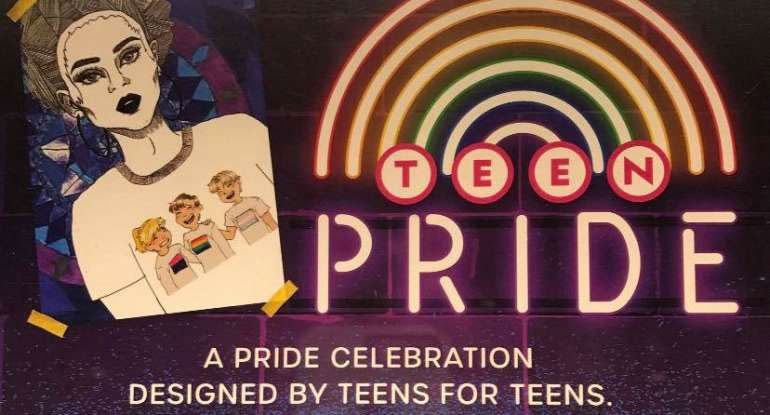 Of course, there's no way this was "designed by teens." It's all adult driven.

The parents contacted MassResistance for help, and our Washington MassResistance chapter got right to work. The parents first wanted to protest the event. But instead, we told them that the best thing would be to get inside and take photos and video of what happens. They agreed, and we worked with them on planning for that.

In the days leading up to June 22, as word of the event spread, there arose a big pro-family push to force the library to cancel it. In particular, The Activist Mommy Elizabeth Johntson asked her thousands of followers to call and email the library – resulting in a flood of phone calls. But the library refused to relent.

Instead, one of the library employees contacted the Antifa chapter in Seattle and urged them to take action against the local parents opposing it. We’ve already seen that Antifa makes it a point to attack parents who protest Drag Queen Story Hours. Maybe it reflects their own dysfunctional backgrounds, but individual Antifa activists seem very obsessed with protecting those who push homosexuality and other kinds of deviant behavior on children.

The event takes place – here’s what the mothers saw

On the day of the event there was no pro-family protest outside the library. Instead, three local MassResistance mothers were able to walk inside the event with their cameras. Although the event was for “youth” ages 9-19 – and the room was almost filled with them – there were several other adults there, mostly involved with the presentation.

Surprisingly, the mothers were able to take videos and photos quite openly during the event, in full view of everyone. What they saw was ghastly. It’s difficult to come to terms with the fact that people do this with children. 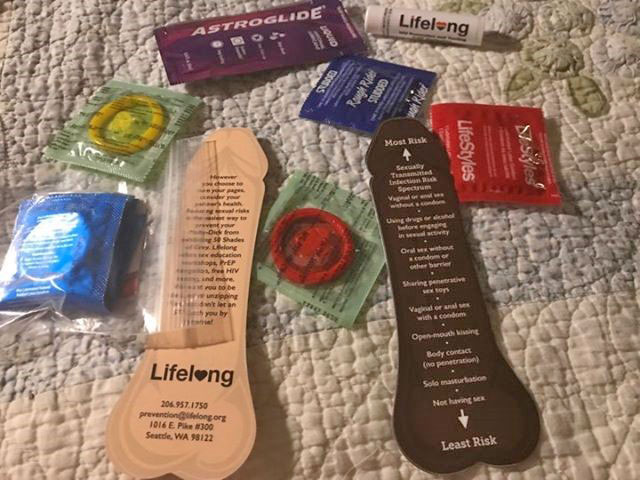 Besides condoms, lubricant, and all the rest, they even gave the kids two types of penis-shaped bookmarks. 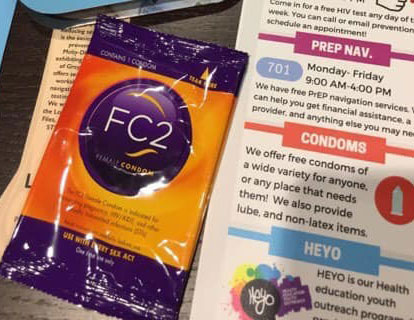 In one exercise, several children along with one adult were lined up with signs describing the steps of using a condom during sex (see photo below). From left to right the signs read:

These children (with one adult, second from right) were part of a "condom" exercise led by the "Teen Pride" presenter. 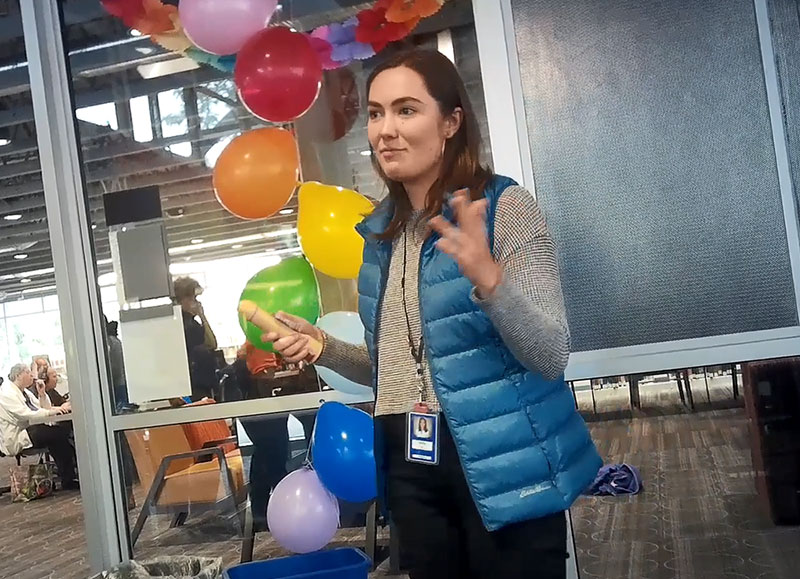 The "Teen Pride" presenter. A fake penis was a central part of the presentation.

Another large part was devoted to transgenderism – making the children comfortable about “changing” to the opposite sex. Planned Parenthood representatives spoke about their “gender reformation services” that involve “giving testosterone and progesterone to young people.” They wanted to let the children know that this was available to them to make their “transitioning” easier. Make no mistake: This is recruitment.

At one point the presenters gave away “breast binders” to several of the girls. Breast binders are large straps that tightly cram a girl’s breasts flat to her chest – so she can look more like a boy. In fact, it is now recognized that these can cause serious damage to girls’ bodies. But the LGBT movement heavily promotes these to girls who may be “questioning” their “gender.” 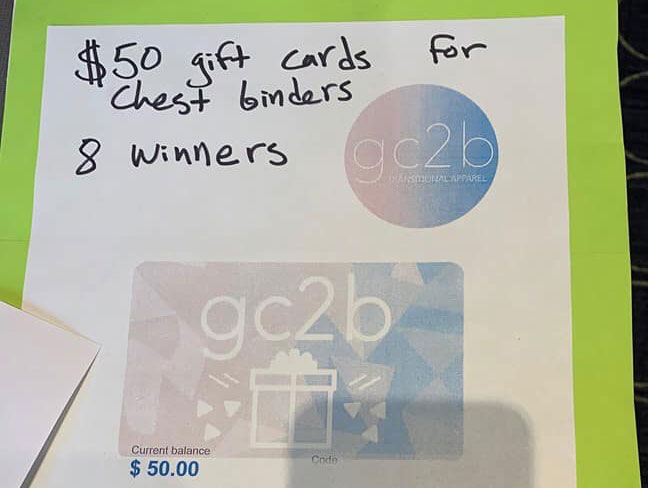 Eight girls got gift cards for chest/breast binders, as if this is something they should want to have and use.

There was also an effort to get the children to take an active role in the LGBT movement. There were “pride” buttons and various propaganda pamphlets. 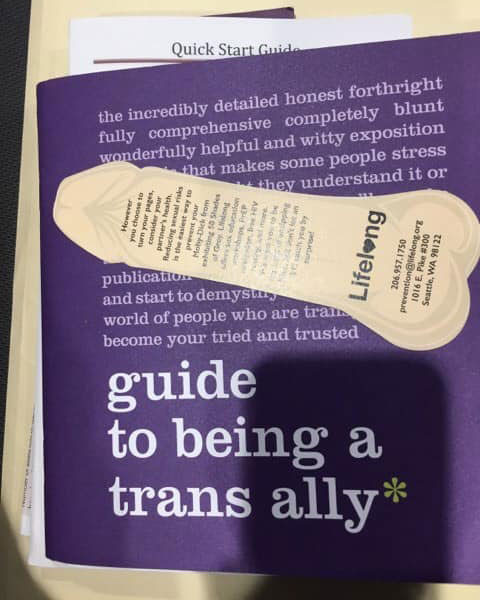 They are really out to mold children's minds on their sexual agenda. 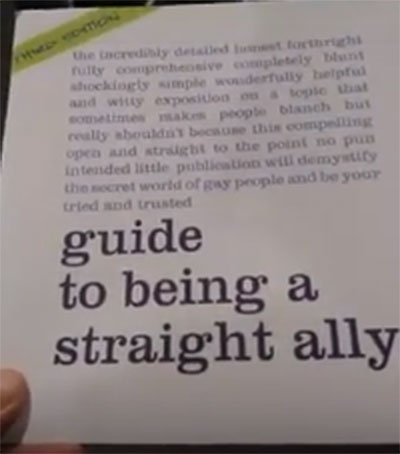 "Straight Ally" means being an active supporter of the national LGBT movement.

Finally, there was a “drag queen” presentation. Four bizarre men dressed as women performed lewd, sexually provocative dances for the kids. One sang, "If you feel like a girl then you really are a girl ... sh*t, f*ck." Then they talked to the kids about how they can become drag queens themselves. One drag queen revealed that he mentored a current drag queen from the age of 12. All four of them shared their Twitter handles with the children, to follow their “careers.” (That, of course, will lead children right into a triple-X-rated world of depravity and link them up with predators in that “community.”) 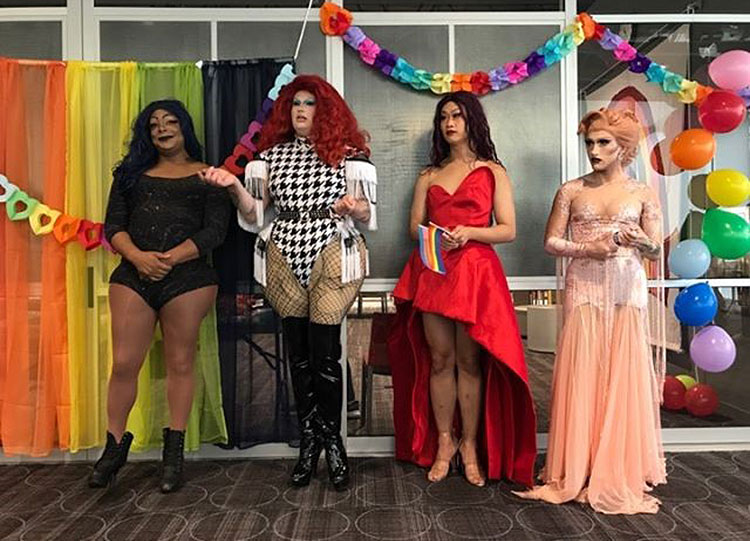 What would a "youth" event be without drag queens? 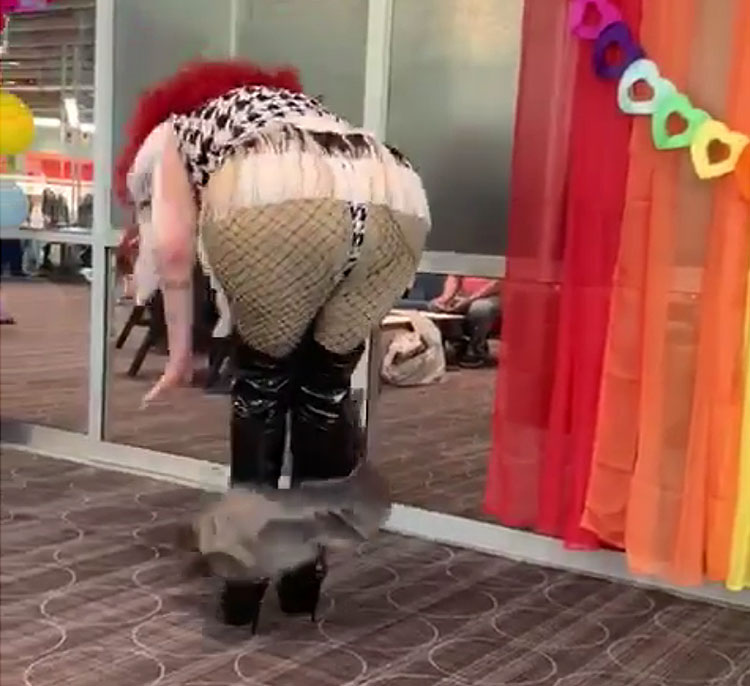 One of them did a bizarre strip-tease like dance for the kids. 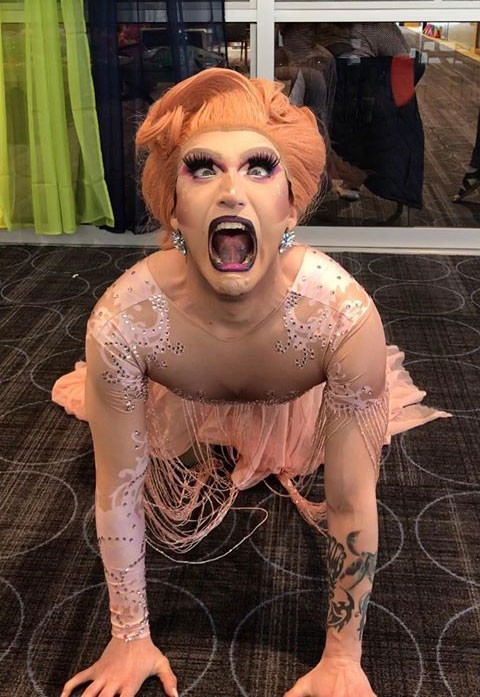 This one got on his hands and knees and screamed.

The four adult drag queens dancing for kids put on two shows with a Q&A afterward.

Here's what kids will find when they look at the drag queens' social media posts. (CAUTION: Disturbing images.)

All of this was portrayed as a normal and positive experience for children by the presenters and the adults working with them, as well as library staff members who were in the area. It was only the three mothers who saw anything wrong at all.

"The big focus seemed to be sex, getting into drag, hating your body and being everything you're not," said one of the MassResistance mothers.

The videoing mothers get thrown out by police

At 5:00 pm the presenters suddenly announced that “all adults not accompanying a teen must leave.” This was clearly aimed at the MassResistance mothers who were filming the event. It was hard to tell if the other adults there were parents of any of the kids.

The presenters told the two mothers with cameras that they had to go now. (The third mother who was not filming apparently escaped their notice, and was able to stay and watch.) The two mothers said they were refusing to leave because, they said, this is was a public building and this was a public event, and they were concerned about the children.

The police came and forcefully escorted the two mothers out, informing them that they were guilty of “criminal trespass.”

“We didn’t talk to any of the kids, we didn’t harass anybody. We were polite,” one of the mothers said. “I saw kids that looked like they were 10 years old. It was horrifying.” But the police were quite hostile and not interested in their explanation of what the kids were being exposed to. Sadly, this attitude by police has been our experience across the country. 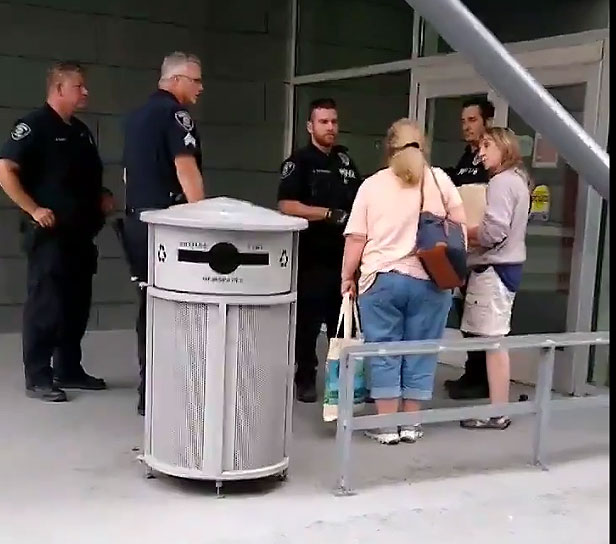 There were four police officers on hand to make sure that these two mothers didn't go back into the library.

Note: Our advice to the activists prior to the event was to strongly insist on their right to record in a public place, but ultimately to obey the orders of police (and make sure to get their badge numbers, etc.). We certainly understand that in the heat of a situation that doesn’t always happen. Luckily, the library told the police they were not pressing charges and the police let the mothers free once they were outside the building.

The two mothers walked to the parking lot. They were quickly surrounded by four men – Antifa thugs – who began screaming at them and threatening them, calling them vile names. They said they were going to photograph them and their license plates and put it on social media. One began to blow a loud shrieking whistle at them. The mothers had to call 911 for police to come and escort them safely to their cars. Of course, none of the Antifa goons were arrested or charged with anything. 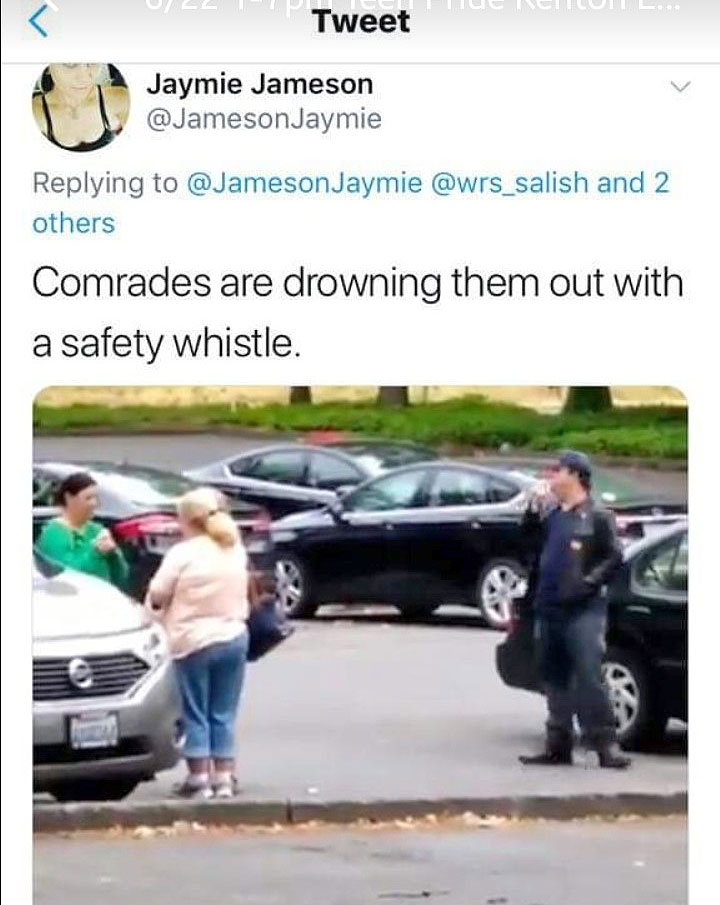 This is a tweet sent out by an Antifa thug with a photo of one of them blowing a loud whistle at the two mothers in the parking lot to harass them. But the police took no notice of that.

After the two mothers left the event ...

The mother who was able to stay until 7:00 pm told us that kids were referred to Lambert House, "community center for LGBT youth" in Seattle. She says the kids were told they are "recruiting performers ages 13-22." The mothers told us they have found out that Lambert House has a legal team informing kids of their "rights" - and hosts drag shows and dances for ages 13-22.

Getting the news out!

We train our people not to be intimidated by the Left’s disgusting tactics. Antifa hooligans and thugs will not stop our MassResistance activists! The mothers went right home and began getting the word out about this hideous event.

Within a day it was covered in one way or another by several national conservative media outlets, from PJ Media to Fox News. Though those media focused on the drag queen part of it, the mothers’ effort was still a success!

We all hear a lot about what the LGBT movement is doing to the schoolchildren it targets across the country. But it’s rare for parents – or the general public – to see it first-hand. It truly boggles the mind how revolting it actually is.

Sadly, this trend is not new. For many years, MassResistance has been exposing the content of “LGBT youth” events.

But let’s be painfully honest: The most evil people in all this are the ones we all trust to protect children – the school officials, the elected school board members, the teachers, the library staff, etc. But they are doing just the opposite, actually helping these horrible special interest groups prey on the children. In addition, their efforts recruit vulnerable kids into the perverse LGBT “community.” Good people need to recognize this and act accordingly.