Joining pro-family groups who are speaking out during current “extradition” protests.

A brave woman leads the charge! 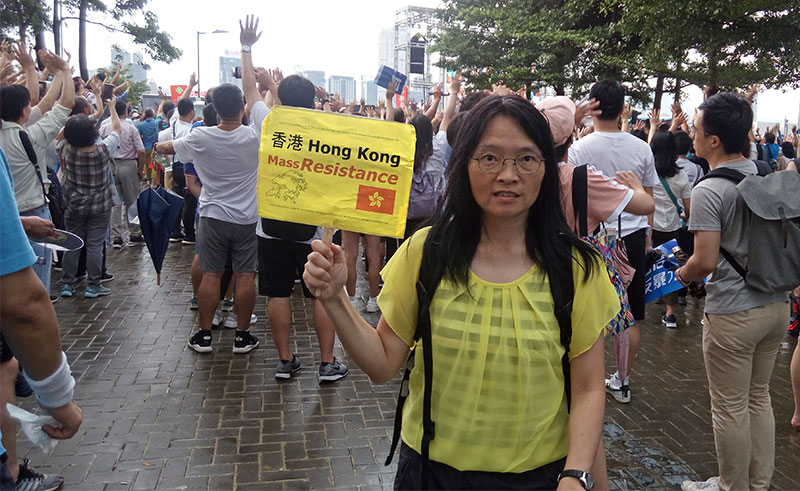 Teresa Wong, our Hong Kong MassResistance leader, at a "Save Hong Kong" rally in the city's financial district on July 20.

Our revitalized Hong Kong MassResistance chapter has been very active in the pro-family fight in that nation. This year the LGBT movement has been more aggressive than ever. Because the leadership of the current “extradition” protests sweeping the nation has been infiltrated by many pro-LGBT activists, MassResistance is making its voice heard in those events, too.

Hong Kong, like most other Asian nations, has resisted the LGBT agenda despite years of pressure. Unfortunately, the pro-family groups there tend to be relatively fearful of taking on this issue directly. Our Hong Kong MassResistance chapter first formed two years ago to pick up the slack!

This past year a new local leader, Teresa Wong, has taken the reigns of the Hong Kong MassResistance group – and it is taking off!

On Nov. 20, 2017, Teresa Wong came to the Hong Kong legislature and gave strong testimony against a bill which would allow Hong Kong residents to choose their “gender” in government documents. Because of pro-family activists like her, the bill failed! It was a clear setback for the LGBT lobby. 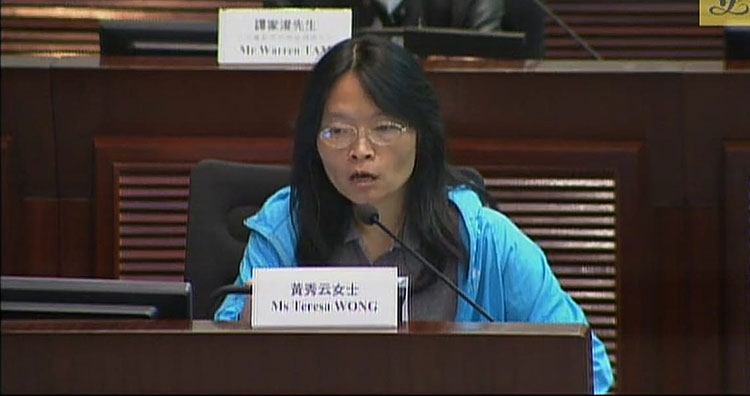 On Nov. 17, 2018, standing at the beginning of the Hong Kong “Gay Pride” parade, Teresa Wong (under a rainbow umbrella) and other MassResistance activists handed out hundreds of flyers with testimony from ex-gays and ex-transgenders such as Walt Heyer, and information about homosexual behavior. This was something no other Hong Kong activists dared to do! 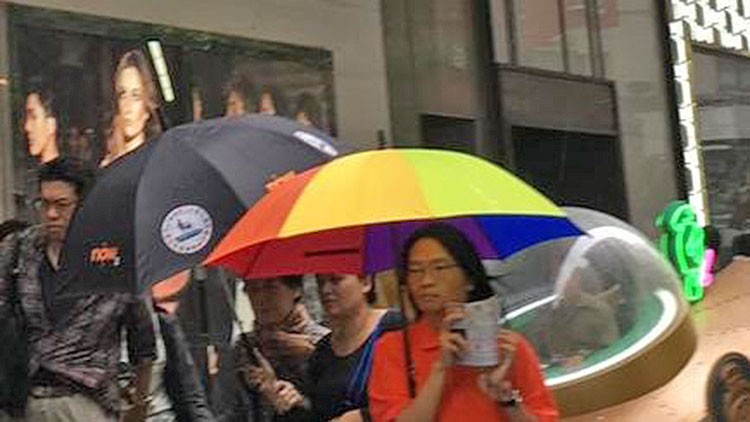 Teresa passing out the flyers (below). 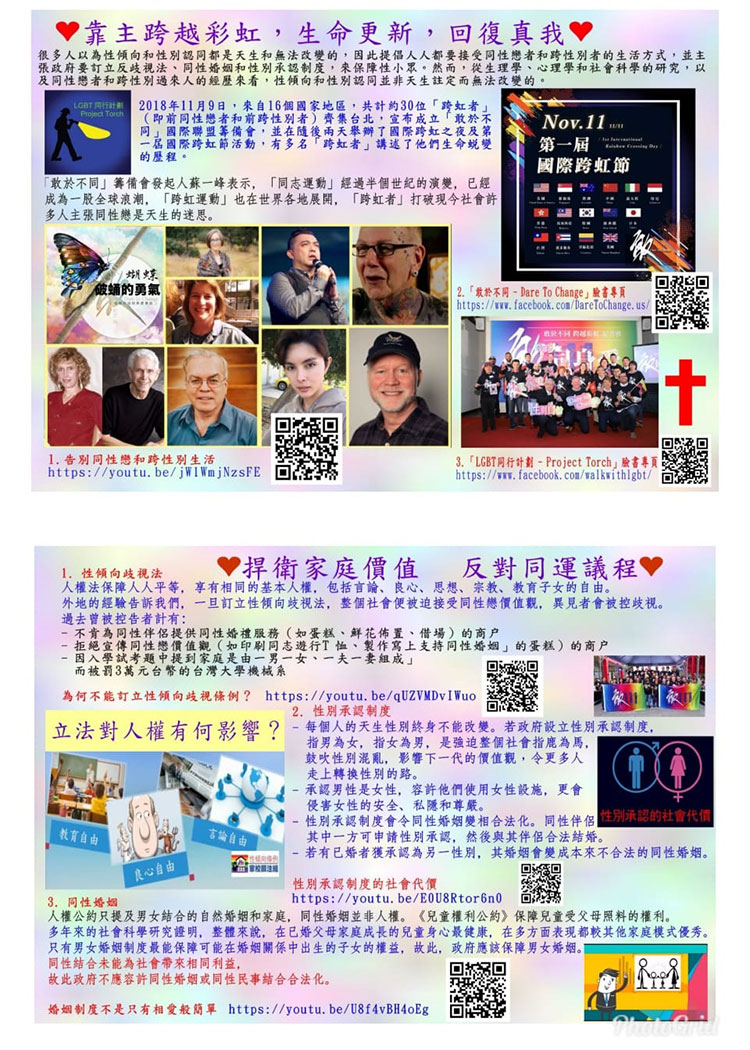 Also at that parade was another incident that resulted in a victory for the pro-family cause. During the parade, one of the LGBT marchers removed his clothes and marched down the street naked. In many cities around the world the police just ignore it. But the Hong Kong police quickly arrested him. He was brought to trial and subsequently found guilty of exposing himself and fined by the court. It sent a clear message to the LGBT movement.

In March 2019, one of our Hong Kong MassResistance activists – a young college student – urged us to take action to counter the legal tactics being used to eventually force “gay marriage” into Hong Kong. Same-sex couples were filing pernicious lawsuits demanding the same rights as married couples. The fear was that the country’s Secretary of Justice Teresa Cheng, (similar to our Attorney General) would drop her objections to same-sex marriage and cooperate with the LGBT activists. She had already made rumblings in that direction. 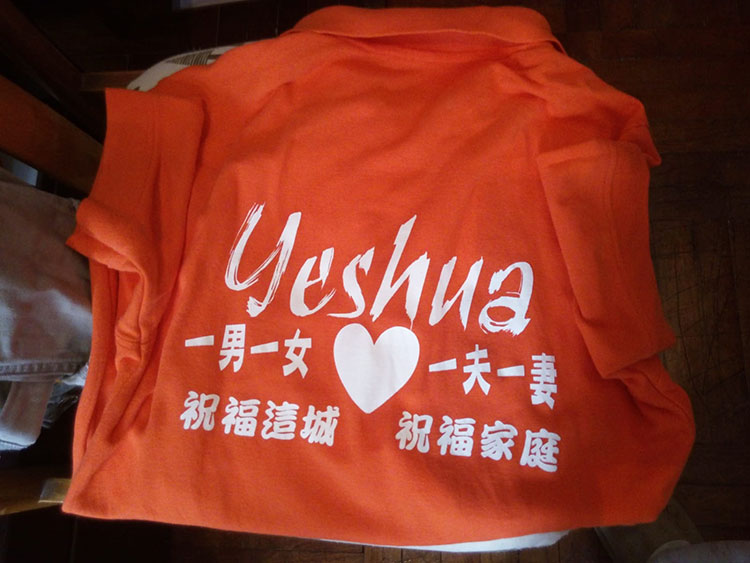 The message on this shirt worn by many pro-family people in Hong Kong: "One man, one woman / one husband, one wife."

Although many pro-family people were lobbying Teresa Cheng on this issue, we felt that more was needed. So with the help of our friends in Vancouver, MassResistance contacted Hong Kong citizens who were living in Canada. (There are lots of them!) We urged them to demand that Cheng make her stance clear against gay marriage and any recognition of such false unions within the country.

It worked! Following our Canada email campaign, the Secretary of Justice made no further statements on or action to support permitting gay marriage in the nation. The LGBT lawsuits were ultimately unsuccessful.

We are working with Hong Kong activists to confront any further attacks against marriage, life, and family.

On May 21, Cathay Pacific Airways released a series of advertisements in Hong Kong featuring two “gay” men. The Hong Kong airport declined to display the ads, and it caused a big controversy across the country.

On May 26, pro-family legislator Priscilla Leung, a member of the Legislative Council (the national legislative body) held a press conference to denounce the airline’s action and the encroachment of the LGBT agenda in Hong Kong. Several national pro-family figures, including Teresa Wong of Hong Kong MassResistance, were invited to take part.

Teresa Wong illustrated how far the LGBT agenda had already moved by holding up a local high school newspaper that pro-LGBT material aimed at the students. In particular, the newspaper says that Hong Kong is officially in the process of legalizing “gay marriage” – not really true but certainly wishful thinking on the part of the activists. 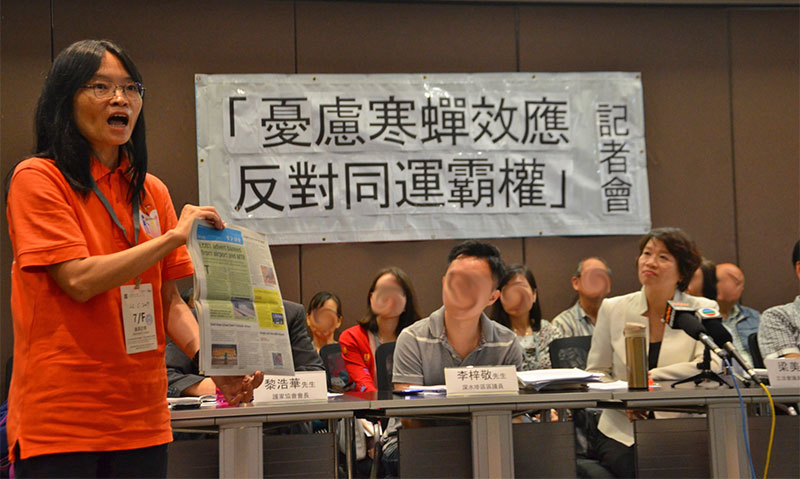 Teresa holds up the high school newspaper at the press conference and describes what's in it as Legislative Council member Priscilla Leung (front row in white jacket) looks on. NOTE: Members of other Hong Kong pro-family groups who are in the photo have asked that their faces be blotted out because of their fear of the LGBT movement. It's a truly shameful situation.

The massive protests against extradition attempts by mainland China

Besides the incremental attack on marriage and family, massive protests have broken out throughout the region because of heightened tensions with Mainland China. Even though Hong Kong runs as a semi-autonomous country, the nation is still technically under the supervision of the mainland Chinese Communist government. After Great Britain returned Hong Kong to Chinese power in 1997, an agreement was worked out in which Hong Kong would remain under a free market, common law system independent from the Communist mainland China. Of course, the mainland government has worked subtly over time to overturn the region’s autonomy.

In their latest move to consolidate their power, the mainland Chinese government introduced legislation through the Hong Kong Legislature in February 2019 which would allow the mainland government to extradite any Hong Kong residents whom they accused of violating Chinese laws.

This latest attack on the region’s autonomy has sparked massive protests. Since the legislation was introduced, hundreds of thousands of people have taken to the streets in Hong Kong to protest.

Pro-family people have observed that pro-LGBT activists have openly infiltrated the leadership of the major protest groups. This has been a disturbing development in other pro-democracy movements around the world. In Hong Kong, the infiltrators are riding the pro-democracy wave to push their LGBT agenda – particularly same-sex “marriage” – to be legalized.

For example, the "protest flier" (shown below) is being passed around in Hong Kong, and was handed to one of our Hong Kong MassResistance activists. It talks about the goals of the protests. The part that's circled says:

Rainbow Revolution!
Get the public’s mind toward gender equality!
Remove all fear about different sexual orientations in the world!

The LGBT movement is clearly working to hijack the Hong Kong anti-extradition outrage. 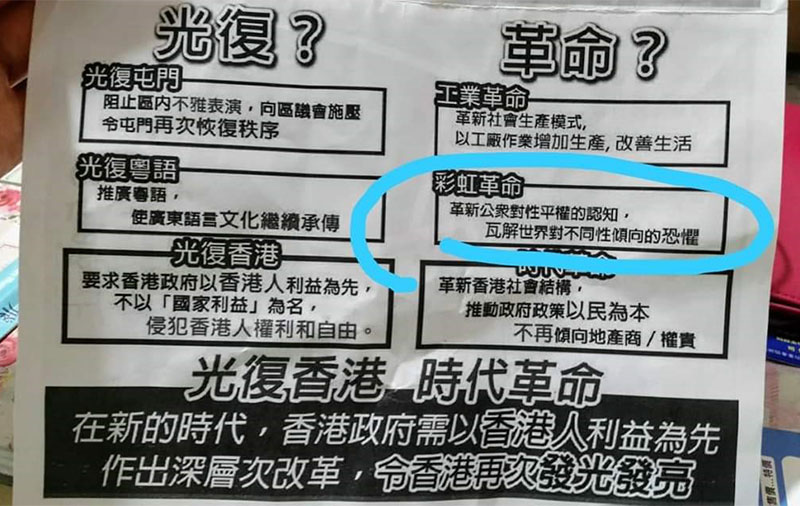 Thus, pro-family groups, including Hong Kong MassResistance, want to be visible as the opposition to that direction – and they are unafraid to speak out!

Hong Kong MassResistance was at this “human rights rally” – to make sure that the rights of parents and pro-family people are part of the picture. 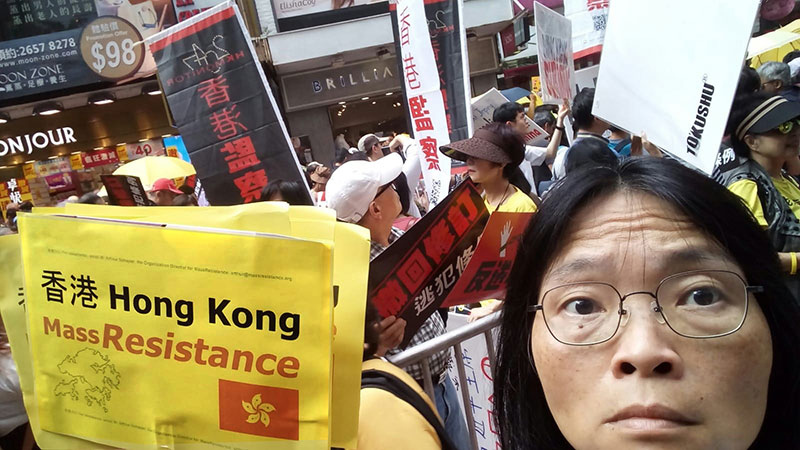 At the Human rights rally.

On June 26, 2014, mainland China signed UN Resolution 26-11, titled "Protection of the Family." The resolution states that "[T]he family is the natural and fundamental group unit of society and is entitled to protection by society and the State." Every year Christian groups gather to celebrate the signing of that resolution. This year, Teresa joined them with a purple MassResistance flag to show support!

During the UN debate on that resolution, some delegations had demanded that same-sex couples be specifically included in the definition of a family. But that was, thankfully, rejected in the final version. To celebrate that, many people wear the "one man, one woman" shirt shown above. 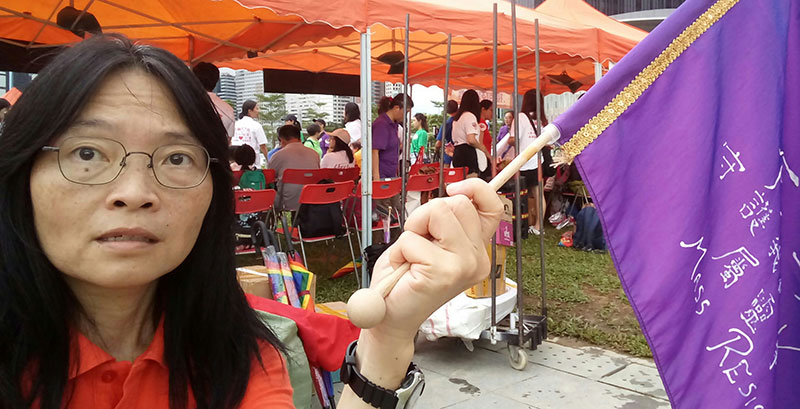 Showing support at the pro-family rally!

A lot of young people came to this rally, held in the financial section of town. Hong Kong MassResistance was there, too – to save Hong Kong from the LGBT agenda! 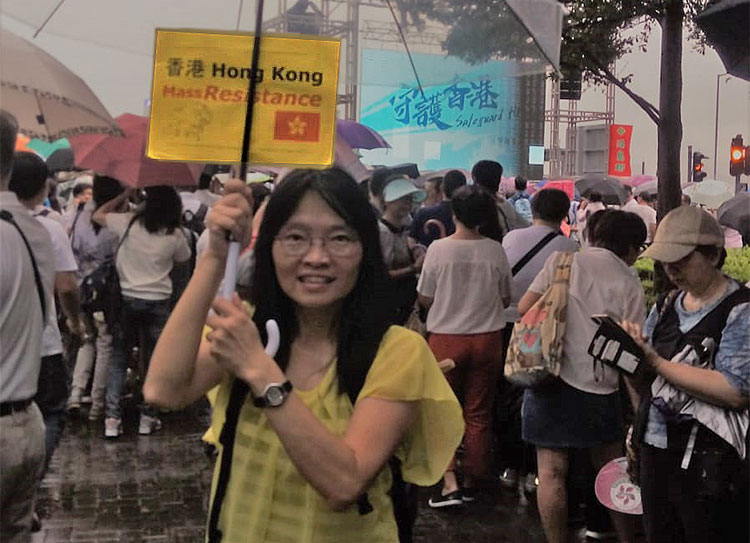 At the "Save Hong Kong" protest.

The “Silvery” group is organized by older people who believe that the protesting should be done within the law, not randomly and wantonly like many of the other groups were doing. 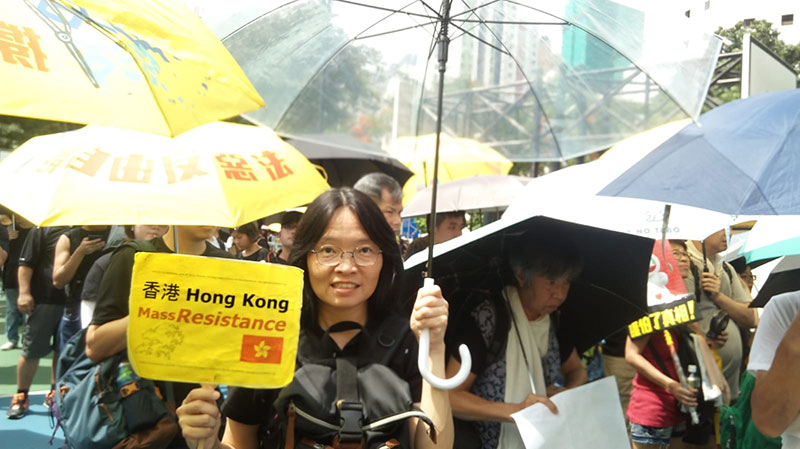 Marching in the "Silvery" protest.

This group is also there to protest against the violence by some of the groups that have taken to the streets. The slogan above the MassResistance sign says “Against Violence.” They are also against the illegitimacy of the illegal protests, especially by the violent groups. 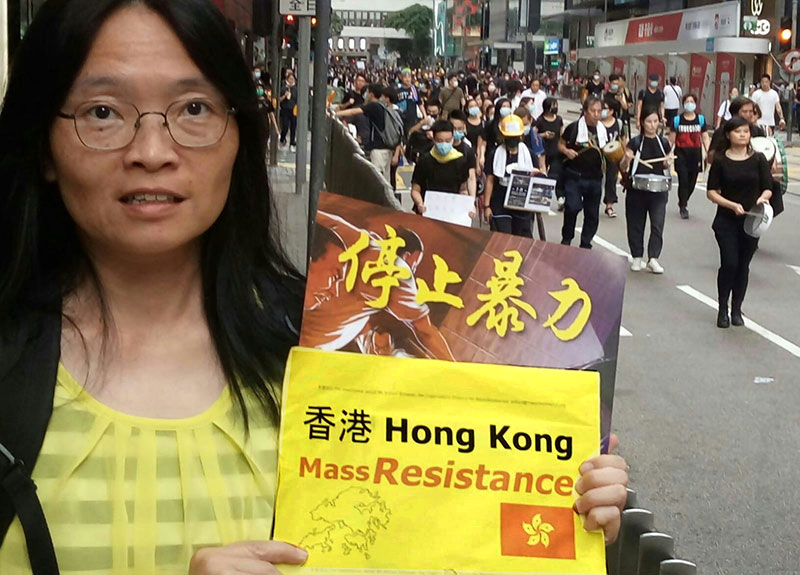 Showing the MassResistance presence at the anti-violence protest.

We are really proud of our Hong Kong MassResistance team! They are boldly leading the pro-family charge where other larger groups back off!