Pulling no punches: THIS is how you take on the LGBT lobby! (LISTEN below.)

Colliding in debate: Arthur Schaper of MassResistance (l) with the MassResistance book on The Health Hazards of Homosexuality - and Chris Davin of Equality Nevada with "No H8" (ironically) written on his face and tape on his mouth. (Listen below.)

As depraved “Drag Queen Story Hour” events show up in public libraries around the country, the reactions against them by too many on our side can sadly be termed as “tepid.” Well-meaning people fight back with limp terms like “age inappropriate” and “sending confusing messages to kids.” These may be technically true. But they don’t get to the heart of the matter. They hold back because they don’t want to be called “hateful” or “bigoted” by liberals.

The truth is that the LGBT movement, working with corrupt public officials, is purposefully pushing to normalize sexual perversion in the minds of young children, using public libraries. This is not hyperbole. They admit it on their website. (It's absolutely not about "literacy" or "love of reading" – whatever they pretend.)

MassResistance takes the direct approach. We don't hold back like other pro-family groups. After 26 years fighting these battles, we’ve learned that fearlessly telling the truth is the only way to success – no matter how the Left reacts.

On August 24, the Paseo Verde Library in Henderson, NV, a Las Vegas suburb, held a “Drag Queen Story Hour.” Nevada MassResistance activists exposed the “Drag Queen” performer as a crude adult entertainer. In the weeks leading up to it, they leafletted the town, contacted the Library Commission, the City Council, and the County Board of Commissioners to attempt to get it stopped. On the day of the event they organized a protest outside the library. There was another Drag Queen event on Sept. 7 which parents also protested. 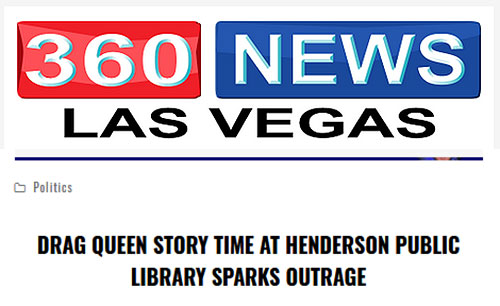 News of the Drag Queen event in the library got attention around the Las Vegas region.

These hideous events didn’t get stopped, but the uproar spread all over the greater Las Vegas area. The LGBT movement in Nevada was furious that MassResistance was able to able to organize people to fight back against their efforts!

On September 12, KDWN Radio in Las Vegas hosted Arthur Schaper of Mass Resistance and Chris Davin of Equality Nevada – the leading LGBT organization in that state (and which was openly promoting the Drag Queen event) -- in a 35-minute on-air debate about the Drag Queen Story Hour.

In our humble opinion, Arthur gave a clinic on how to take on the LGBT pseudo-bullies! He told the truth that most of the pro-family movement would be afraid to say. In point after point the “polished” LGBT activist – who is probably used to walking all over our people – was completely blindsided by Arthur! Listen to it here:

As the Christian Post recently reported, professional counselors who have seen these “Drag Queen” events for themselves are starting to agree with MassResistance’s approach of unabashedly telling it exactly as it is – predators grooming young children.

MassResistance at work in Henderson, NV!

Our presence in Nevada began over a year ago after many parents there contacted us for help. The upcoming “Drag Queen” event in Henderson attracted a particularly large amount of outrage.

Exposing. We started out by exposing the horrible activities of the “Drag Queen” that the city was bringing in to read to young children. 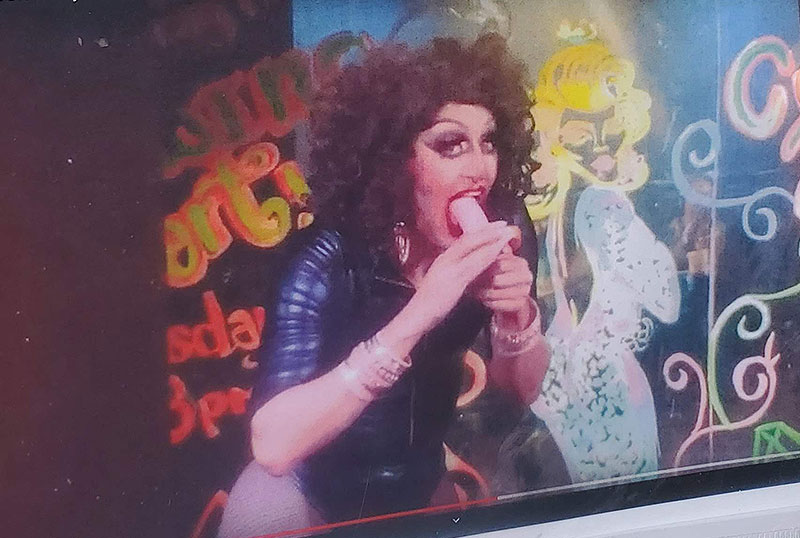 The "Drag Queen" invited to perform in the Henderson library had made a video showing himself putting a fake penis in his mouth to simulate a homosexual sex act. When we exposed this, he quickly took down the video. 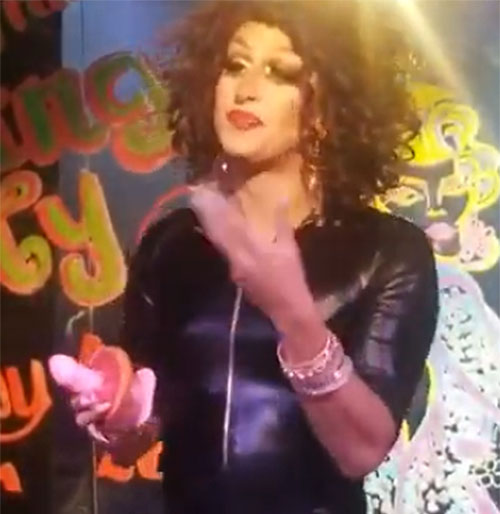 Here he is with the fake penis in his hands, in the same video.

Leafletting. And several MassResistance activists leafleted the town at local stores, strip malls, and other venues. The vast majority of residents were outraged and disgusted when the learned about adult entertainers scheduled to read to children in the local libraries. 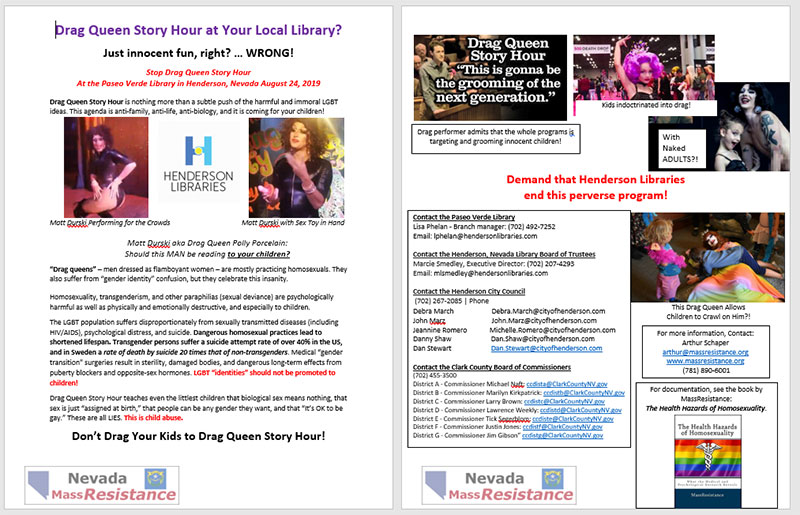 This is one of the flyers that was handed out across town. 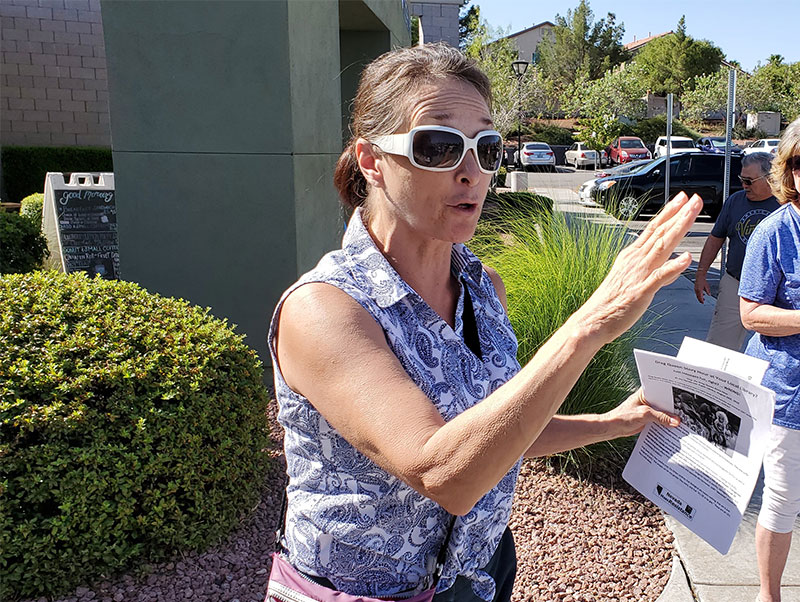 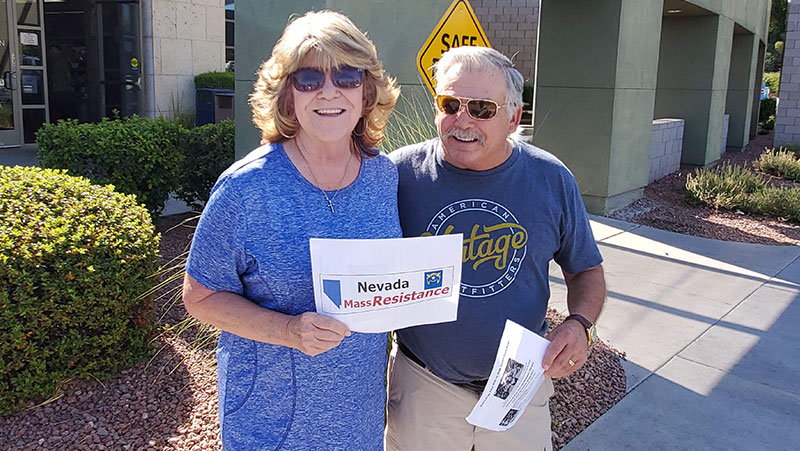 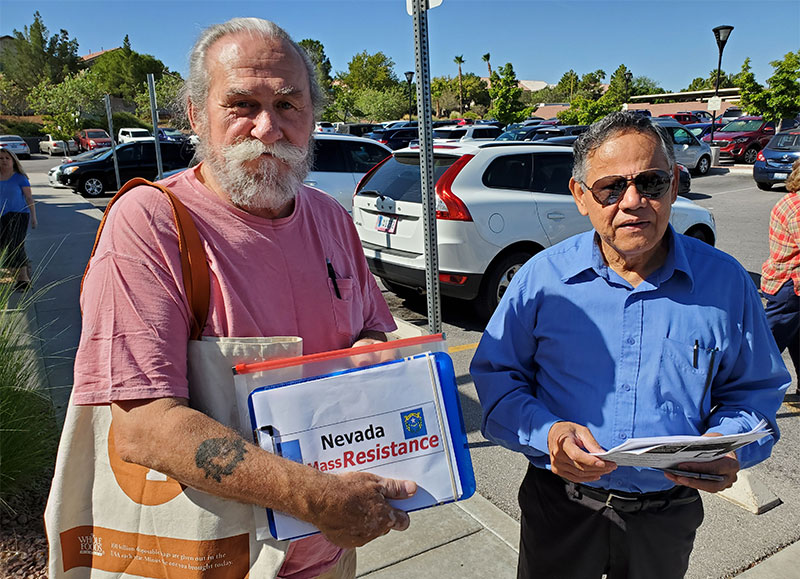 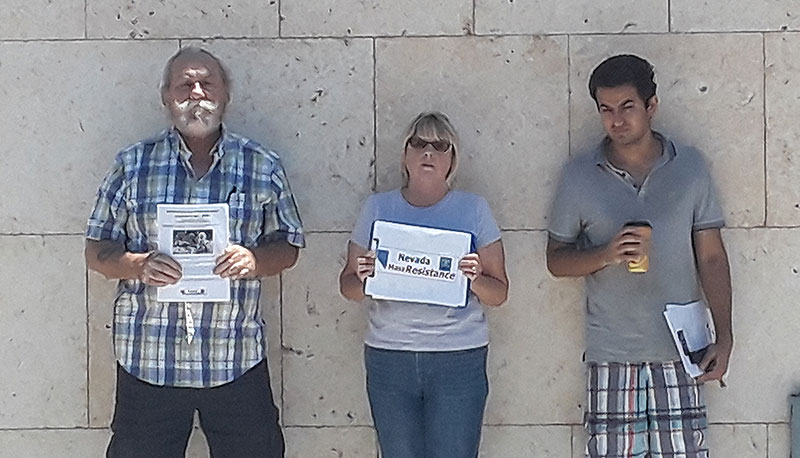 MassResistance activists standing outside the Henderson library passing out flyers.

Protesting. And on the day of the Aug. 24 event, we organized a protest outside. Word had really spread. A police officer even encouraged our team to contact him if anyone tried to threaten them! 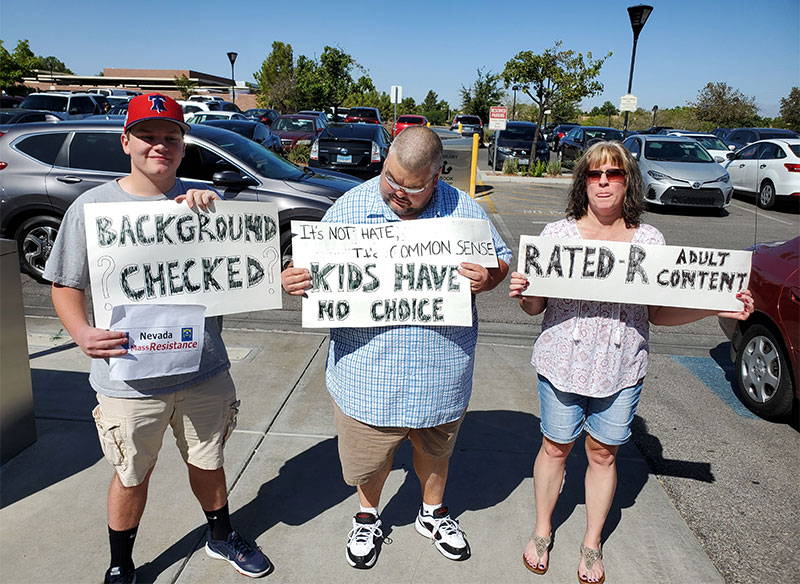 Protesting outside the event on Aug. 24. 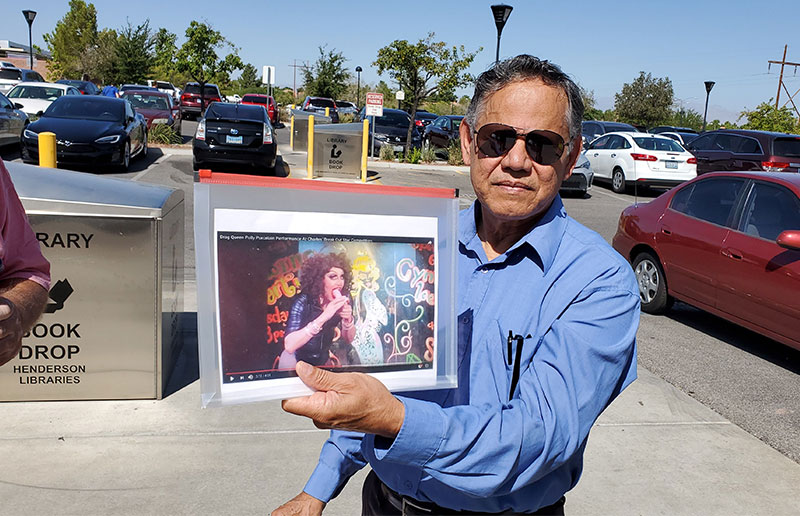 Showing who is reading to young children inside. 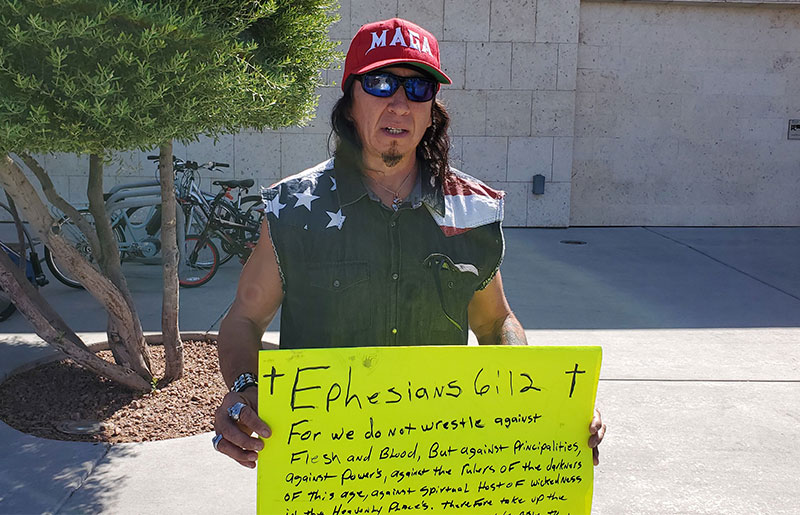 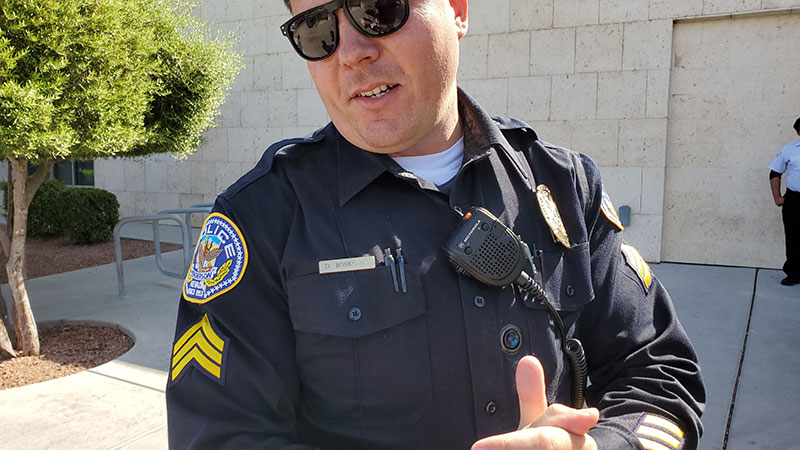 The police were clearly on our side with this issue!

Documenting. A few people also went inside. It is important to document what actually takes place inside these events! 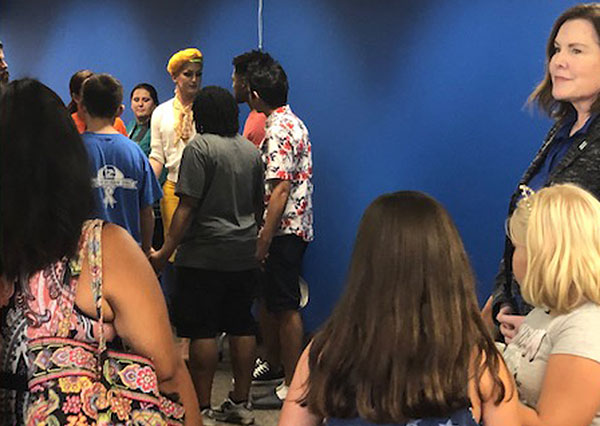 Inside, the "Drag Queen" gets ready to start reading to the children as pro-LGBT adults look on.

Since then, our Nevada MassResistance group has also begun confronting local school boards, as they continue to fight the LGBT (and also Planned Parenthood) agendas targeting children. We will have more reports on that coming up!