Barricades, over 1,000 police, even helicopter patrols

We have never seen so many police, barricades, and overall security in downtown Boston, ever, for any event. Police officers were brought in from as far away as Brockton, MA. The parade route was approximately the same as the "Gay Pride" Parade each June: from Copley Square to City Hall Plaza. At City Hall Plaza, where the parade ended, there would be speeches by the Straight Pride organization's selected speakers. 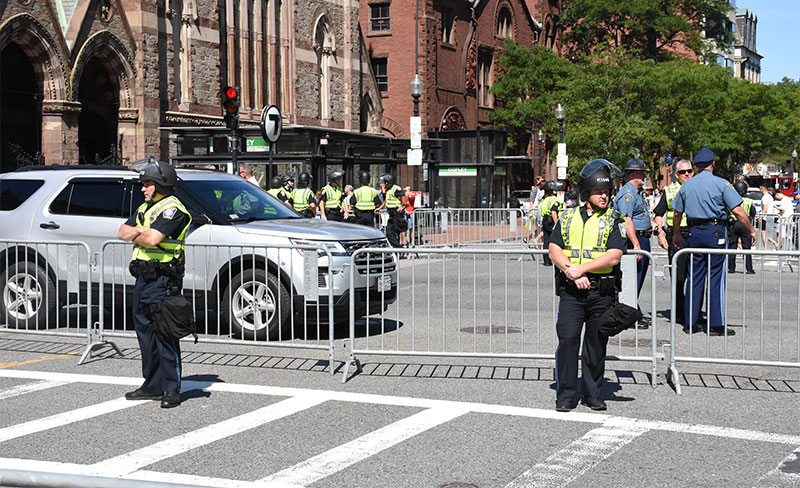 Streets were blocked off around the staging area at the beginning of the parade. Note the Boston Police wearing yellow-green vests and the State Police inside wearing their blue-grey uniforms. 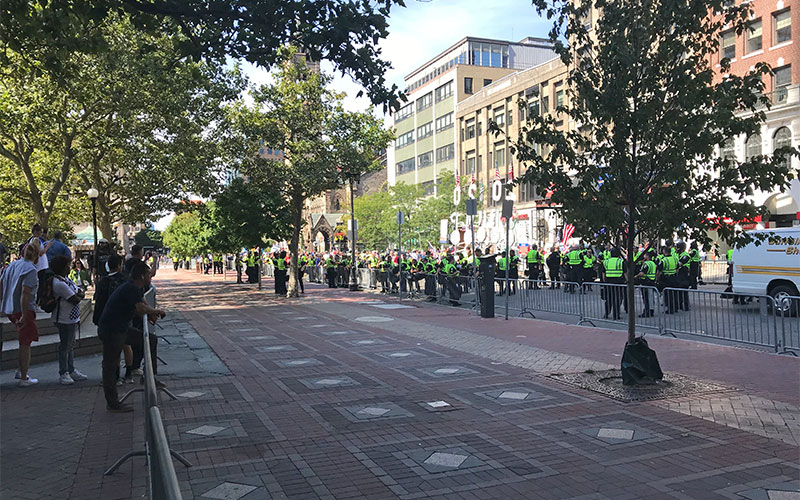 The parade staging area, where the floats were being set up, was surrounded by police, with a double layer of barricades keeping the public away. 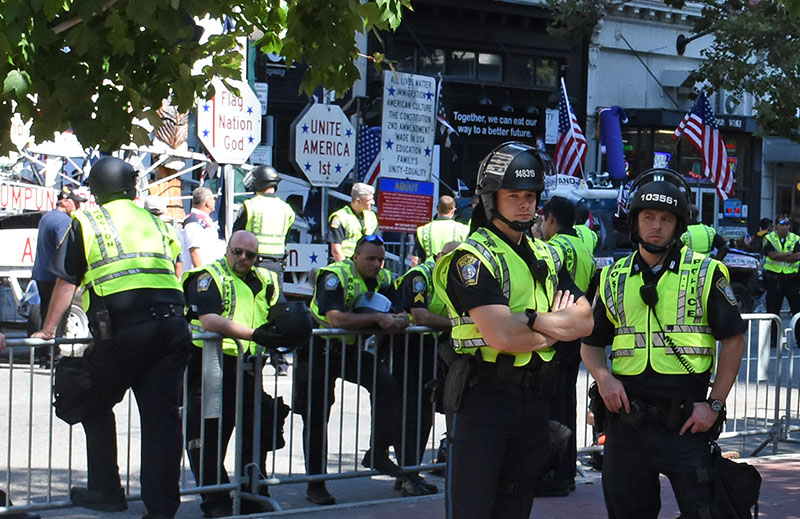 At the staging area. 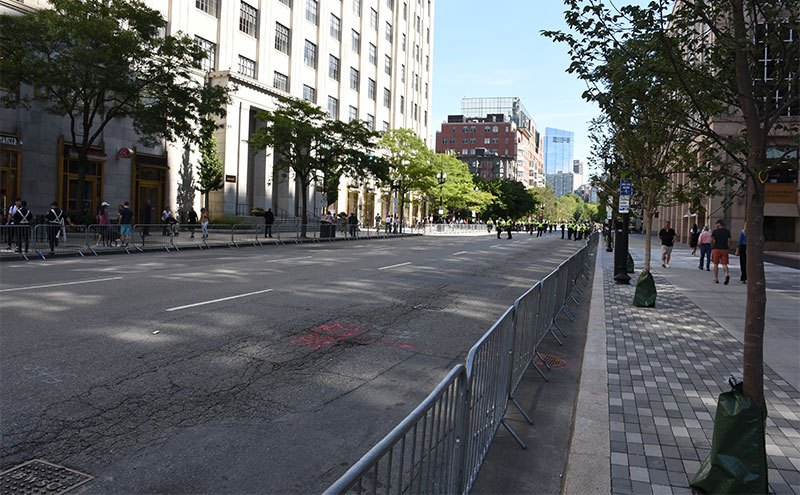 Looking down Boylston Street before the parade, as police get ready to take their places along the way. 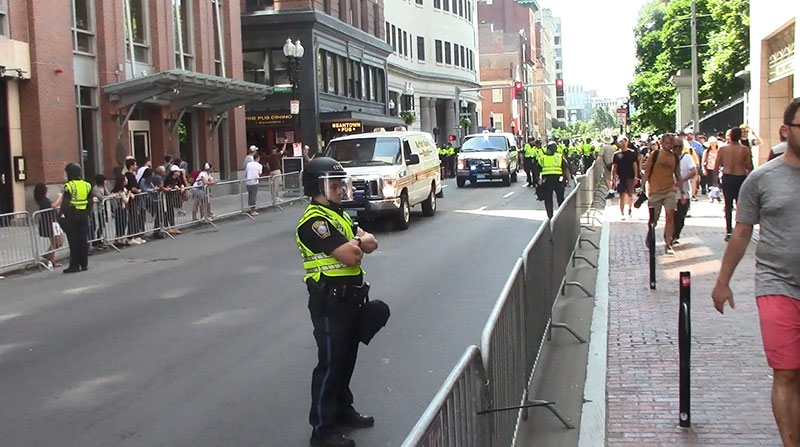 Police took their places on each side, along the entire parade route. 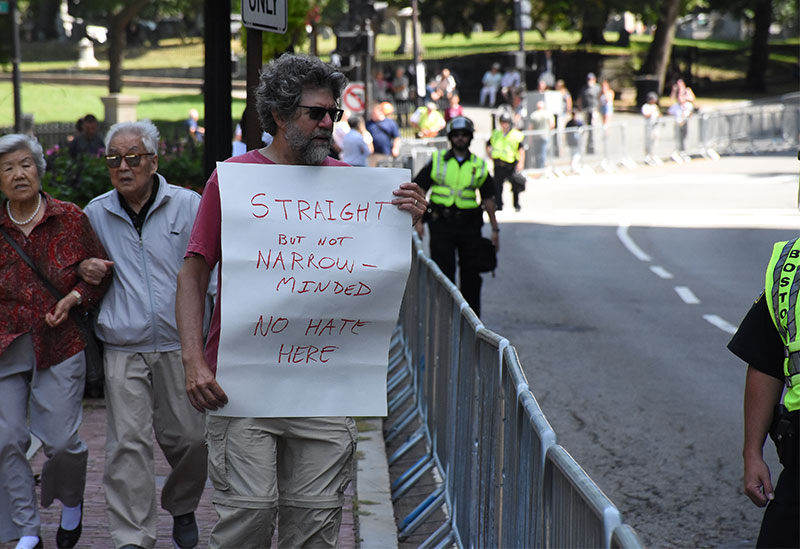 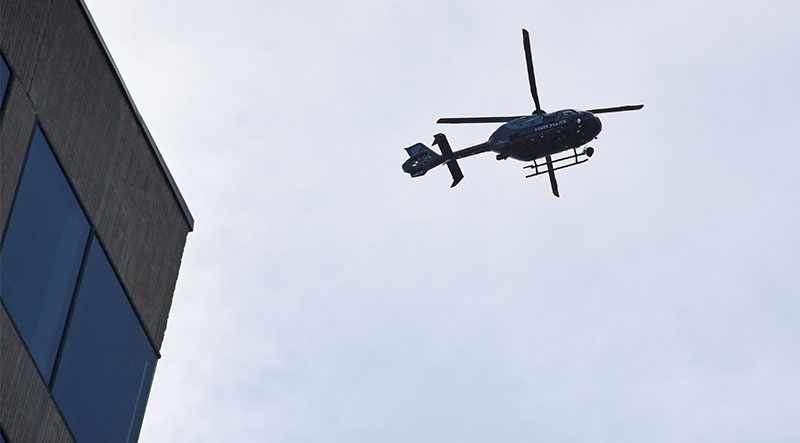 We were told by a police officer that this was a State Police helicopter, which hovered directly above the route. 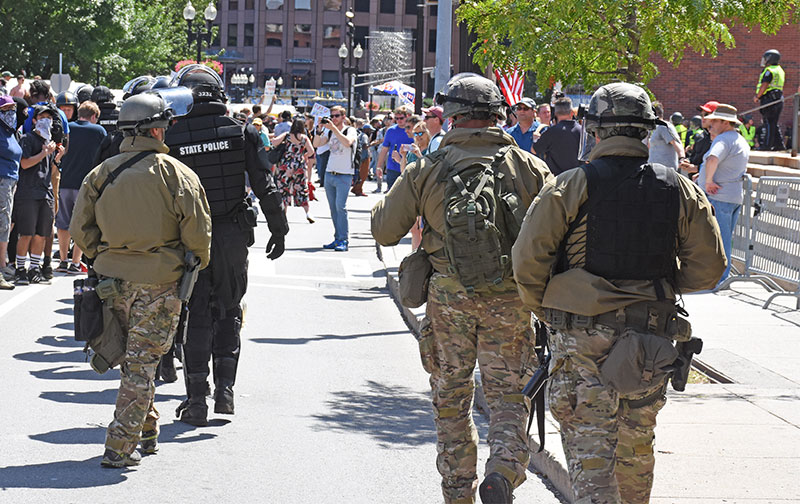 Some of the security personnel appeared to be National Guard soldiers.

At the end of the parade route, City Hall Plaza, where the Straight Pride speeches were to take place, includes Boston City Hall and a large plaza area on three sides of it. The entire area, including City Hall, was completely barricaded and surrounded by hundreds of police. No one had ever seen anything like this! 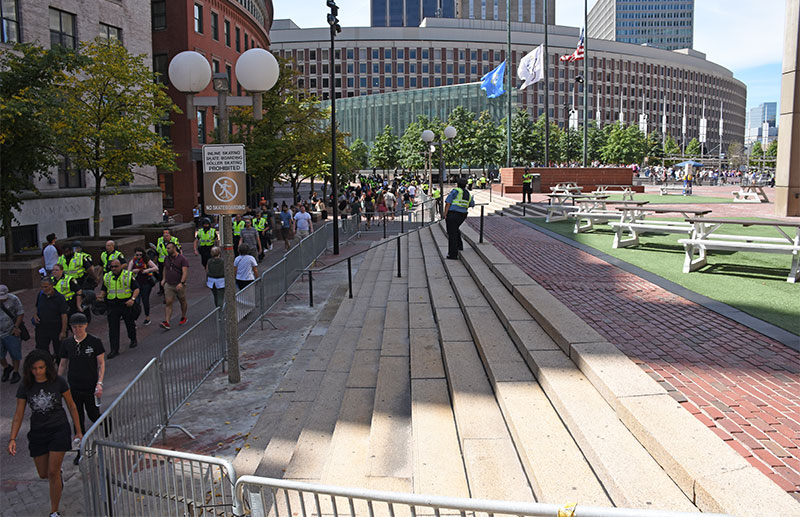 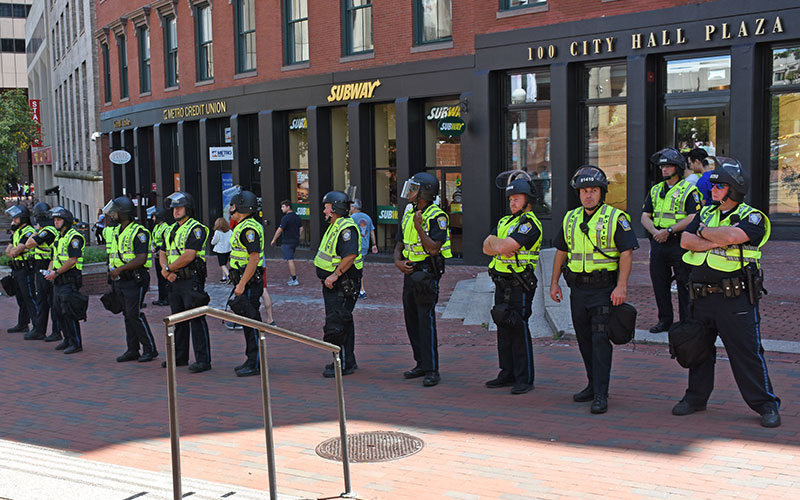 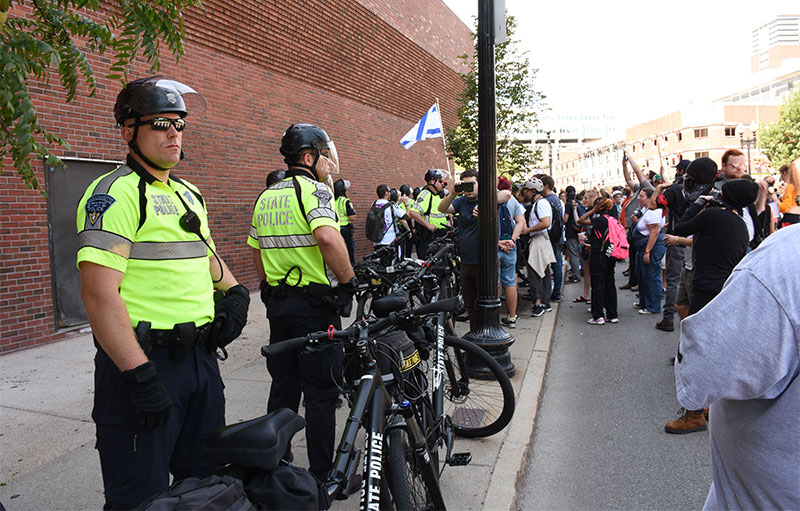 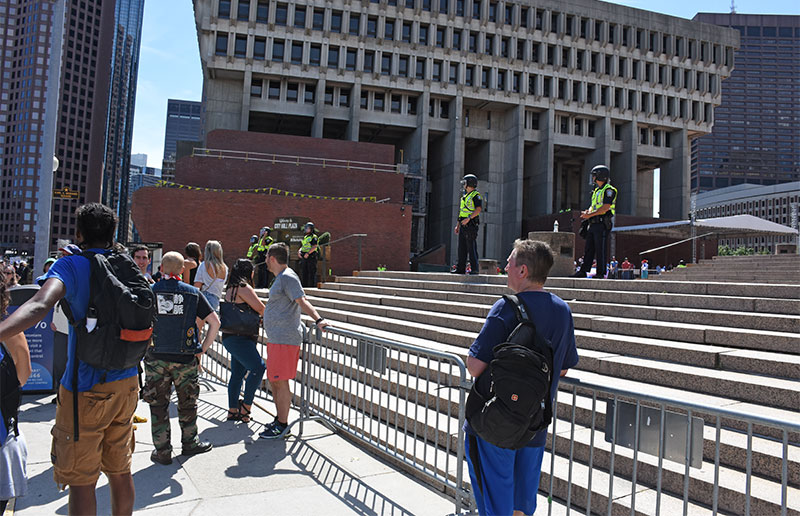 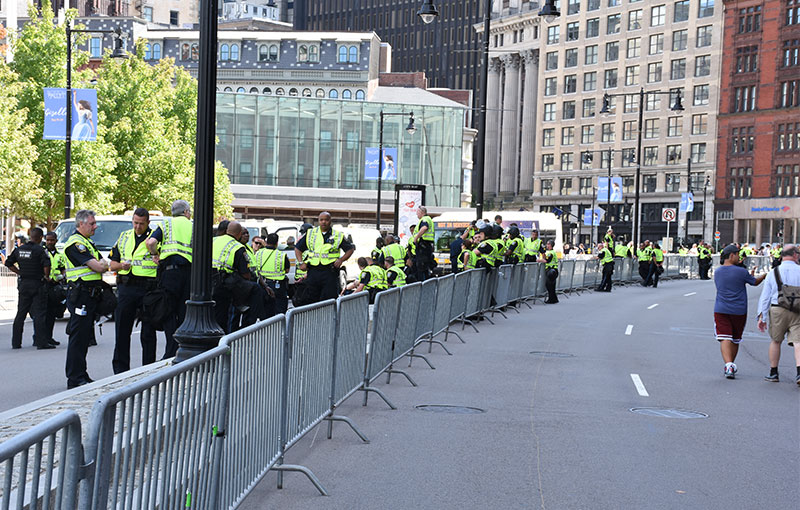 The Tremont Street side of City Hall Plaza. 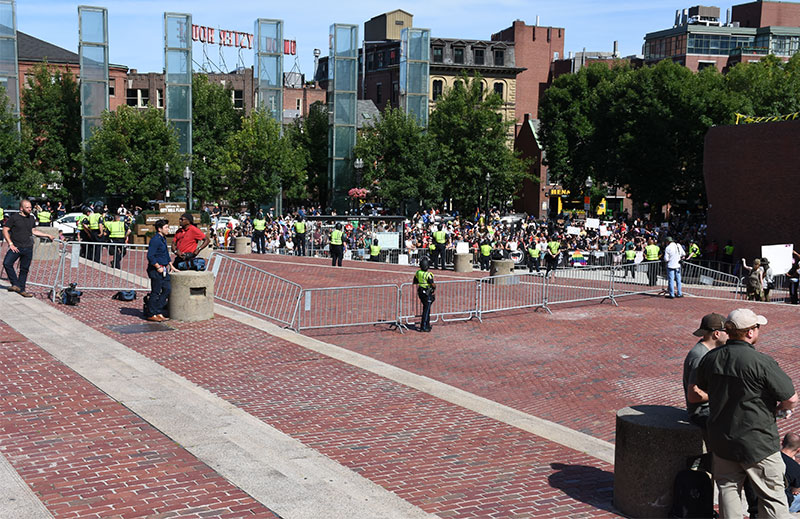 The view from inside City Hall Plaza. Note that there are double layers of barricades -- just in case! 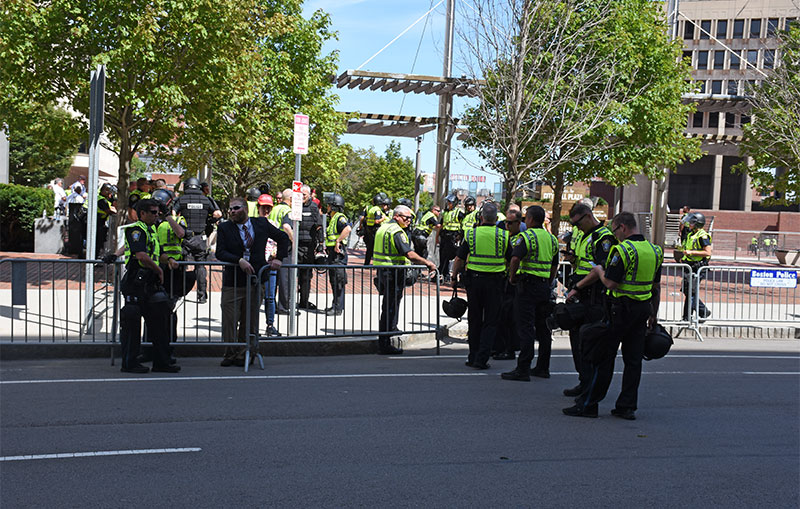 This was the only entrance to get into City Hall Plaza for the event. In order to be allowed inside, you had to be personally recognized by one of the Straight Pride staff members. We met many conservatives who came from as far away as Maine to support the event and hear the speeches, but couldn't get in because the staff member didn't know them!