Officials continue to try to misinform and deceive parents

What you are about to see below is a textbook lesson on how pro-family people must deal with school officials who are pushing perverse sexual agendas on the children. This is how MassResistance differs from all other pro-family groups!

VIDEO: Arthur Schaper of MassResistance breaks through the lies being told by School Board members. (3 min 28 sec)

Even in a “blue” voting city, working people are overwhelmingly against the radical LGBT / sexuality propaganda that education officials push on their children. Thanks to MassResistance, they are fighting back to stop it.

By all accounts, the Downey CA School Board has never experienced this level of outrage from the community. (It’s already set to be the main issue in next year’s School Board elections.)

As we’ve reported in Part 1, back in mid-September MassResistance began exposing the horrors of the “Teen Talk” graphic LGBT/sex-ed curriculum that the Downey, CA School Board had recently approved for the high school and middle school. Dishonest school officials had led parents in this largely minority, working-class suburb of Los Angeles to believe that this was a benign program.

People were outraged. In Part 2 we reported how the new Downey MassResistance chapter led by Sandi, a district mother, got right to work alerting, educating, and organizing people across the city to effectively work to stop this. That effort has been a great success!

Storming the School Board meetings

The Downey School Board members are as entrenched in their positions – and disconnected from parents – as one could imagine. Most of them have been in office for decades. One has been there since 1979 – 40 years! Plus, they rarely have had opposition in their elections. They are used to doing things their way and not being questioned by their largely Hispanic constituents. 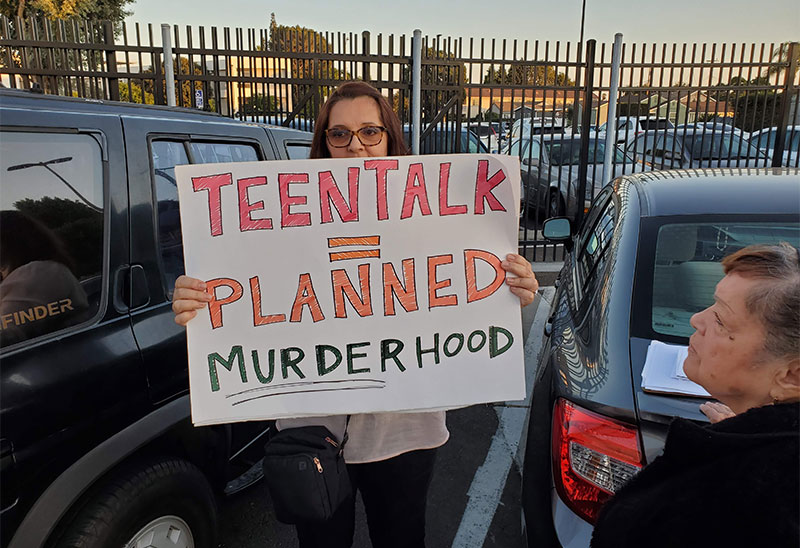 In the parking lot outside the School Board meeting! 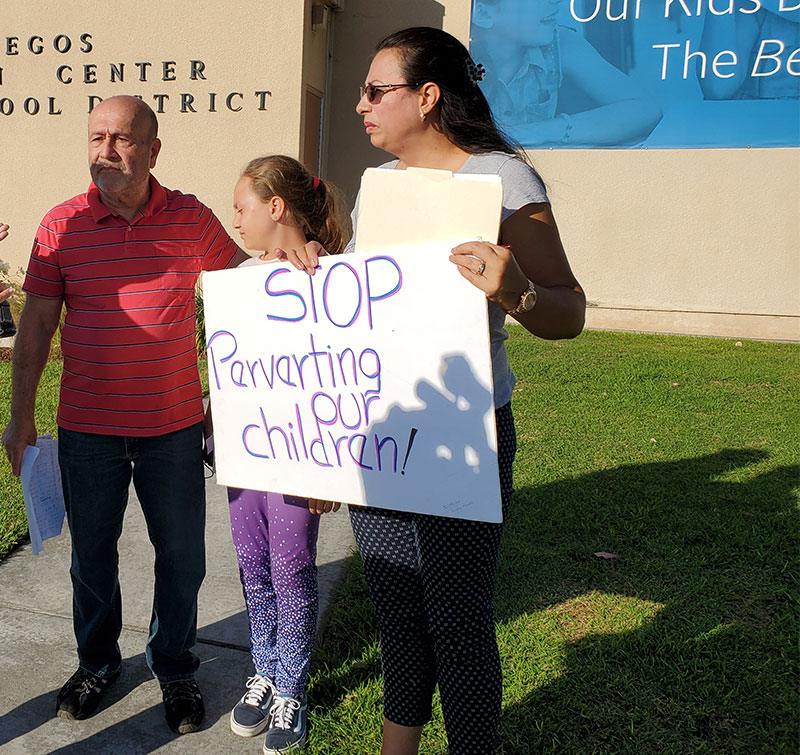 A family in front of the building before the School Board meeting.

That has suddenly changed since MassResistance got involved. Large numbers of parents are emailing them, calling them, and coming to School Board meetings to strongly demand that this toxic curriculum be stopped. 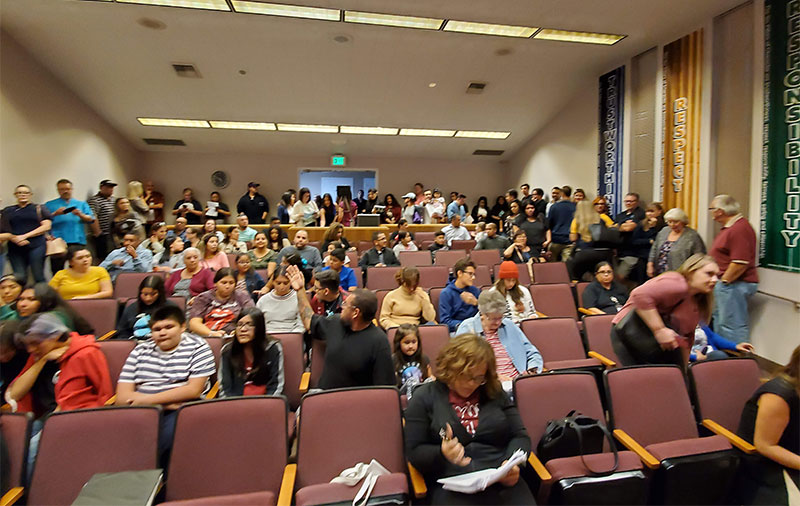 Parents pile into the meeting room!

Letting the Board members know how parents feel about this! 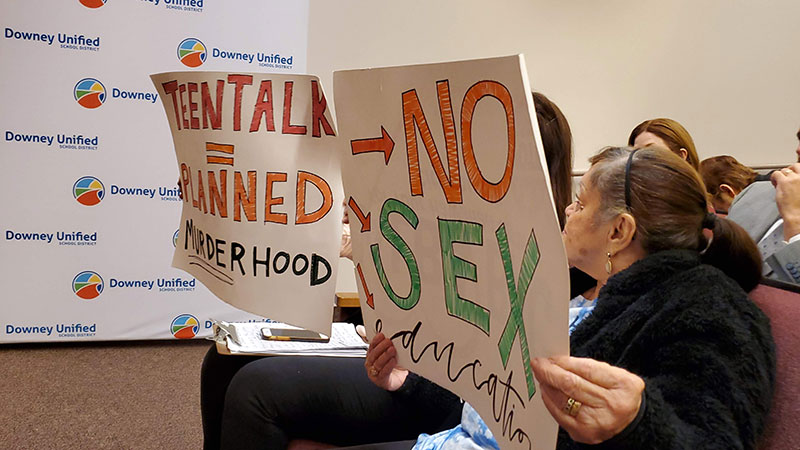 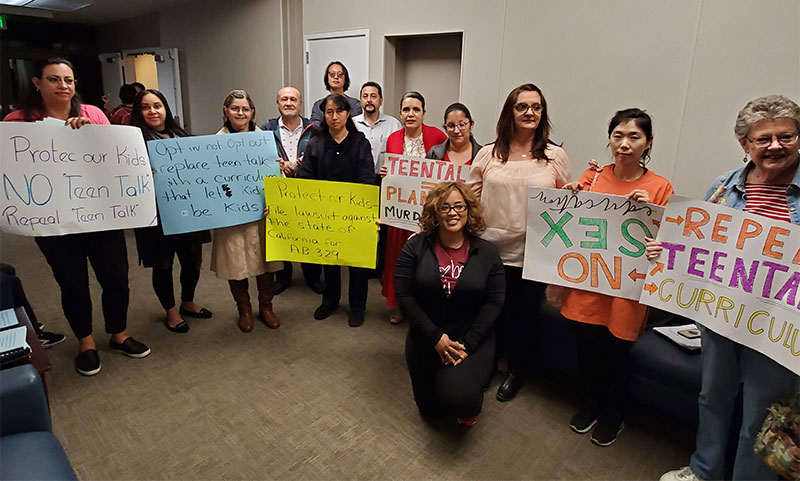 Some of the MassResistance parents in the hallway after the School Board meeting.

The Board is still (for now) resolute in their decision. But they are clearly like deer in the headlights as the parents fearlessly confront them.

But also, the Board members continue to lie about the situation, which inflames parents even more. To defend their refusal to act, they make absurd claims that parents refuse to believe. They tell parents that “their hands are tied” because California state law regarding “comprehensive sex ed” is very specific about what it requires, and mandates that they pick a curriculum that’s been developed to satisfy that. In truth, the law is quite vague, and allows a school district to develop its own curriculum to meet the requirements in any way it wishes.

In addition, the Board tells parents that the curriculum they selected, Teen Talk, is the less onerous and offensive that is available. In fact, the Board simply asked the Department of Education for a few for them to consider, and the (pro-LGBT) education bureaucrats picked Teen Talk and a similar one.

Thanks to MassResistance educating them on the facts, the parents in Downey aren't buying these excuses!

The truth is that the Board could easily repeal their decision to use Teen Talk – and either create their own curriculum or find one that would be far less offensive to parents. 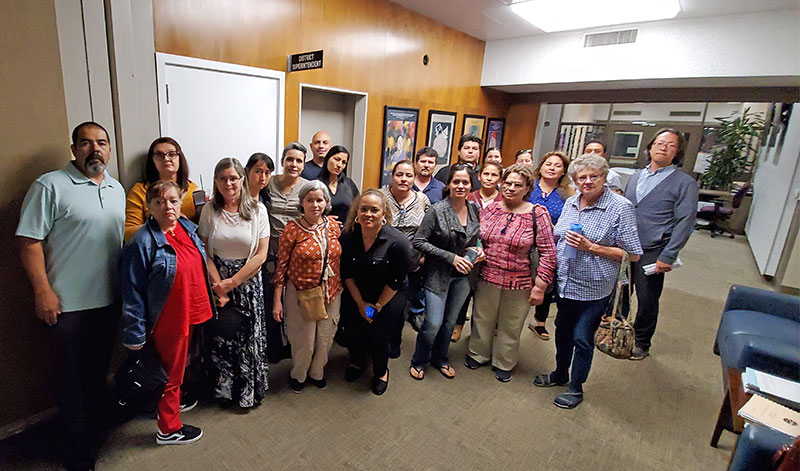 After the meeting some of the Downey MassResistance parents pose for a photo.

The parents in Downey are not backing down on this. The group is growing substantially in numbers and will continue to pressure this Board in every way possible. They are also preparing to find candidates to oppose them in next year’s elections.

Like School Board members across America, this bunch is a group of arrogant liberals who are convinced they know better than parents about children, sex, and homosexuality. It’s time for parents to start winning these battles! We plan to make it happen here.