Neither change was passed by legislature, but arbitrarily imposed by bureaucrats.

The current Montana driver's license application form states in the signature area (center) that people do not have to tell the truth about whether they're male or female.

What happens these days if a state legislature is too slow to implement the latest LGBT movement’s demands? All too often, the state bureaucracy takes over and does it itself, usually with the blessing of influential pro-LGBT politicians. (That happened in Massachusetts in 2004 when "gay marriage" was implemented without the Legislature changing the law. )

Lately, that’s been happening with “transgender”-friendly driver’s licenses. Here are two recent examples. Not surprisingly, it can come with some absurd side effects.

Montana: Some false statements are OK!

If you are renewing your drivers’ license in Montana (as one of our MassResistance supporters did last month) or applying for one, you might notice a subtle – but rather bizarre – change on the form.

Side 1 of the form includes the usual self-identifying information to fill out, including two options for designating the applicant’s sex: Male and Female. But on Side 2, just above the signature area, is the statement:

I certify under penalty of law that the above information and answers on side 1 are true and correct, except for my answer about sex, to the best of my knowledge, information, and belief. I understand that any false or misleading statement on my application may result in criminal prosecution, cancellation of any license or card issued and/or disqualification for a period of 60 days. I understand information may be verified by nationwide systems.

Thus, now even the Montana state bureaucracy has decided to pander to the lunatic “transgender” movement, and allows people to list on a driver’s license whichever sex fits their “gender identity.” But apparently they still feel compelled to admit that people are genetically either male or female – which can never change (i.e., that “transgenderism” is a lie).

Of course, it undermines the validity of their official forms – but why let that get in the way of “progress.”

Interestingly, this would appear to be contrary to the direction that the rest of Montana has been going on these issues:

So how did this concept get included on the state ID application? As we mentioned above, this change appears to be a decision that was made by the Montana Motor Vehicle Division or some influential pro-LGBT state government official who felt that “progress” in that state wasn’t moving fast enough.

This dash of insanity had been introduced in the Massachusetts Legislature earlier this year and actually passed the State Senate by a 39-1 vote. (Yes, even the apparently brain-dead Republicans voted for it, except for Sen. Don Humason, who is leaving office to become Mayor of Westfield.) But it got stalled in the House and didn’t get any further.

So the Massachusetts Dept. of Motor Vehicles – with the blessing of RINO Gov. Charlie Baker – took matters into their own hands. Last week they introduced their new “software upgrade” that includes three designations for a person’s sex: M, F, and X. 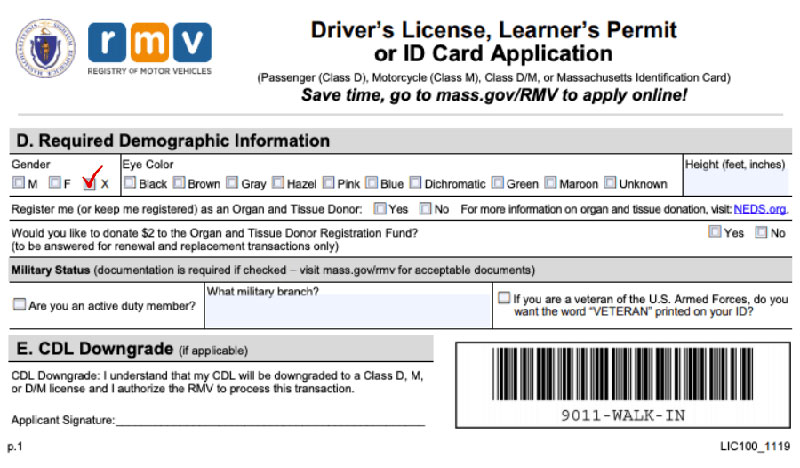 The new official Massachusetts form. Note the "X" is checked.

Where is all this coming from?

The national group “Human Rights Campaign” (HRC) is the largest and most powerful LGBT organization in the country. It raises nearly $50 million, largely from major corporations and wealthy donors. Among other things, HRC is actively pushing the transgender agenda across the country through sophisticated lobbying, pressure, and other techniques. They keep close track of each state, and even cities and regions. They also have state affiliate groups that coordinate these tactics. 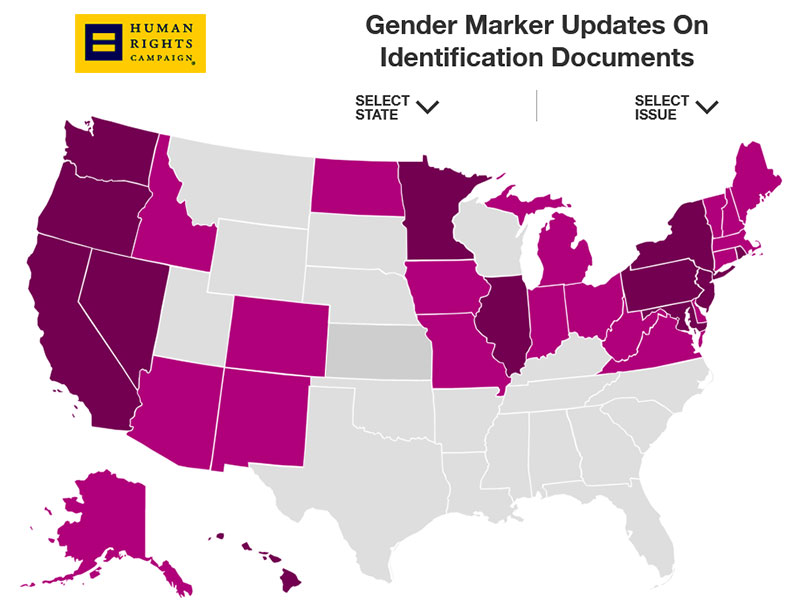 Tracking the transgender "progress" across the country.

HRC is the most prominent, but many other LGBT groups are also working to force states to implement their radical agenda.

Where do we go from here?

Despite the enormous muscle and resources of organizations like the Human Rights Campaign, groups like MassResistance have had a surprising amount of success stopping these kinds of moves over the years, especially in state legislatures. The fact remains that the LGBT agenda is based on lies, scientific quackery, and human destruction. Our side simply needs to be willing to confront it.