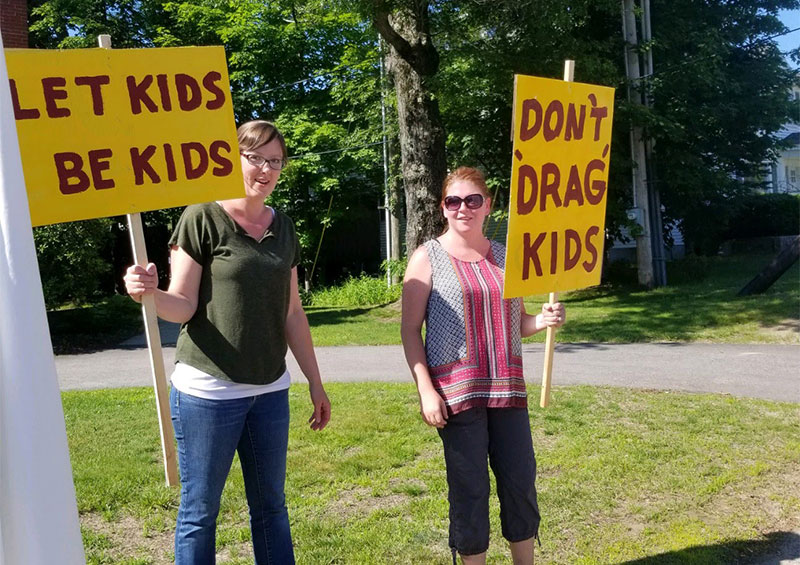 Taking it to the streets: These New Hampshire mothers have had enough of their anti-family public officials!

In the beginning, “Drag Queen Story Hour” (DQSH) events in libraries across the country were an easy way for LGBT activists to reach children at a very young age. The goal of the program: to persuade young minds that transgenderism and homosexuality are normal and natural behaviors. It also opened the door for these events (and other LGBT-themed programs) to become regular government-sanctioned activities.

Whatever community pushback there was, the liberals felt they could easily handle the opposition by ignoring or intimidating them.

Then MassResistance entered the battle, and things got much more difficult for the LGBT movement. Across the country we’ve exposed the obscene sexual nature of the “Drag Queens” – and even criminal backgrounds of some of them. And we’ve helped parents organize and strongly confront the public officials behind this outrage.

Local officials and library administrators are now getting the message that parents and citizens are taking charge. Here are three recent victories –  in liberal states.

Croton-on-Hudson is a village in Westchester County, north of New York City. In late August, a local pro-life activist contacted MassResistance for help. He had learned that the public library had scheduled a Drag Queen Story Hour for October 14, about six weeks away. He hoped it could be stopped.

He told us that that area has many rabid liberal activists who love coming out to harass or intimidate conservatives. Sometimes the leftists would cause a near-riot when pro-lifers were holding signs. Recently, six police cars had to be called to keep order during a demonstration.

So our MassResistance plan was straightforward. Our New York activist simply walked into the Croton-on-Hudson library and told the head librarian, “If you insist on hosting a Drag Queen story hour, we will have more protesters outside your library than you’ve ever seen. We will be very public about our plans. You will have to call in lots of police and a security detail to keep the peace!”

As we’ve previously reported, police and security costs can be quite expensive. Leander, Texas spent $20,000 for security needed due to angry liberals who showed up when our side protested the LGBT-themed story hour at their library. In Chula Vista, CA, the city spent twice that amount – over $42,000! Taxpayers there are still livid! 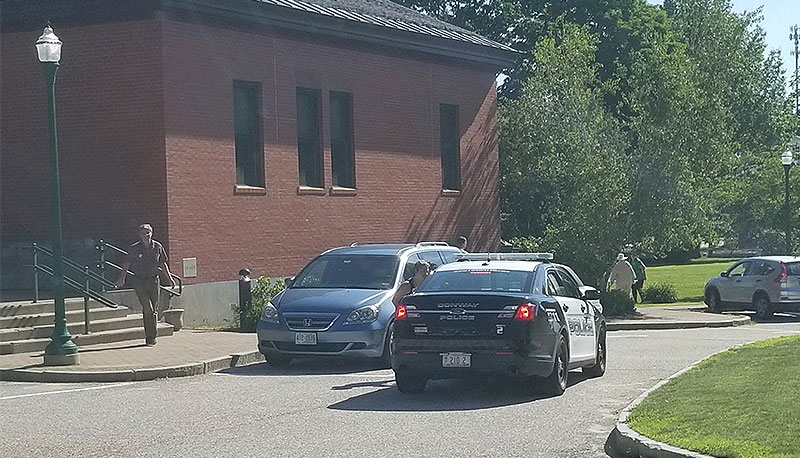 This time they were lucky - there was only one police car at the library!

The Croton-on-Hudson officials got the message. (They could easily confirm that MassResistance was not bluffing.) The librarian later announced that they had reconsidered and would not host any DQSH!

National City is a community in San Diego County, northeast of Chula Vista. MassResistance is well organized in that part of California!

In late September, a local MassResistance activist noticed that the National City Public Library Board of Trustees had announced on their Oct. 2 meeting agenda that they would be discussing whether to bring Drag Queen Story Hour to their libraries.

Our group got right to work! They immediately started contacting Library Trustees. They told them that the community did not want the depraved program in their library. They also phoned and emailed the City Council, telling them not to allow any such program to go forward in their city or libraries.

San Diego MassResistance also contacted local volunteer groups like the Tea Party, Republican clubs, church groups, and veterans’ groups. We showed them whom to contact, and implored them to bring people to the Trustee meeting.

On Oct. 2 people from our side filled the meeting room! Only one LGBT activist showed up to support the program – the same one who had come to scream at us during our Chula Vista press conference. 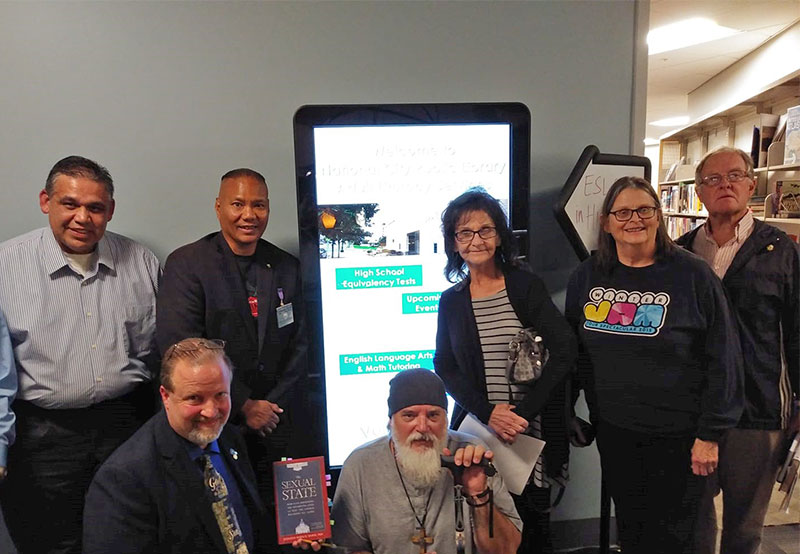 A few of the San Diego MassResistance activists posed for a photo after the Library Trustee meeting. 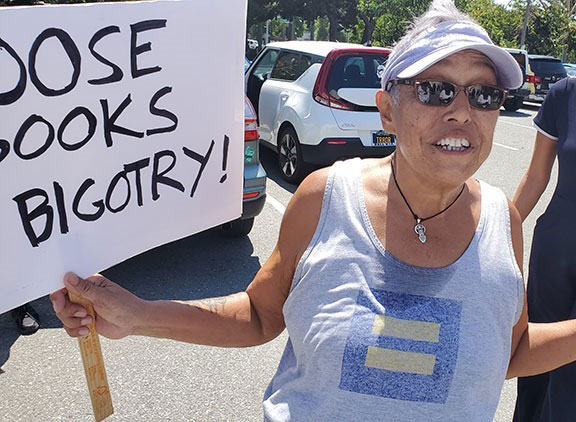 This bizarre lady was the only Drag Queen supporter to show up at the Library Trustee meeting. Here she is screaming at our Chula Vista Press Conference in September.

By the end of the meeting, the Trustees were clearly worrying about the cost of dealing with a flood of citizen protesters, as well as the uncontrollable LGBT lunatics who would come to try to intimidate our side.

At the following Library Trustees meeting in November, we again filled the room – while there only two people supporting the DQSH.

The officials had clearly gotten the message! The agenda item about a “Drag Queen Story Hour” was gone. It was replaced by “Children’s Story Times Programming at the Library.”

In fact, the majority of the Trustees made it very clear that they had no intention of bringing DQSH programs to the libraries for the foreseeable future! They discussed several potential children’s story hour programs, and none of them involved any Drag Queens!

They began networking with people across the region. They passed out flyers alerting the public. 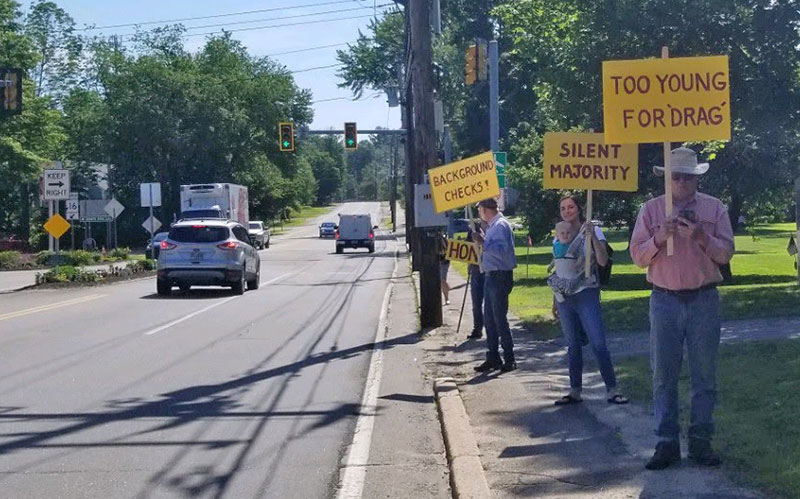 We did our best to get the word out in the community.

They collected the contact information for the local elected officials responsible for the library operations and programming, and launched a massive phone call and write-in campaign against the DQSH.

People came and spoke out during public meetings, demanding that the program be cancelled.

The liberal local newspapers interviewed our people, but ultimately declined to write anything about it. But word of our organized opposition still got out across the region!

On the day of the DQSH event, the number of pro-family people protesting outside against the program nearly equaled the number of people who attended it! It was clear that LGBT activists had come from long distances to make the DQSH event appear “popular.” But most of the children with them did not seem very happy to be there, according to one of our activists. 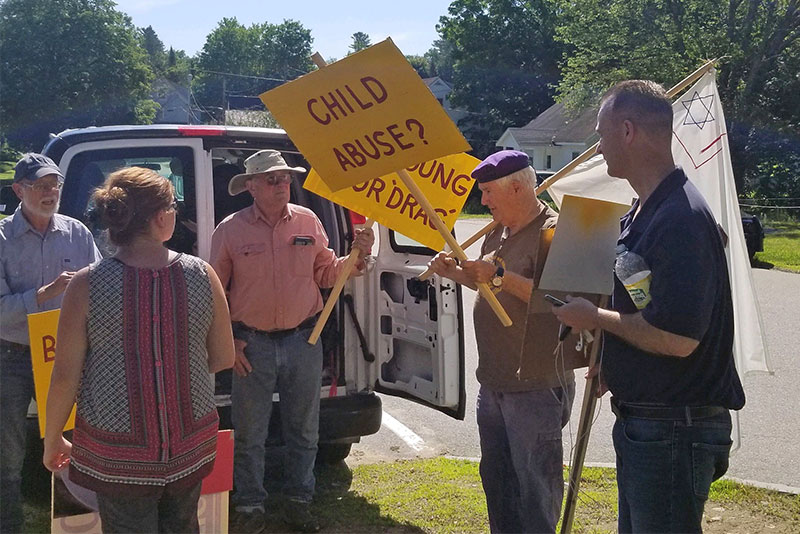 Unpacking some of the signs to protest on the day of the event.

The Conway, New Hampshire Drag Queen event took place in June. The public officials got more pressure and attracted more outrage than anyone can remember. Since then, Drag Queen Story Hour has not come back to Conway!

It’s important for both public officials and LGBT activists to see that our side means business. Otherwise, they won’t take us seriously. When they know they will face relentless and uncompromising pressure, good things happen – even in very liberal areas.