In Idaho: National LGBT movement and left-wing media targeting Governor about to sign anti-transgender bills that passed Legislature this week

Trying to intimidate Governor to veto the bills – even using the coronavirus as an argument. 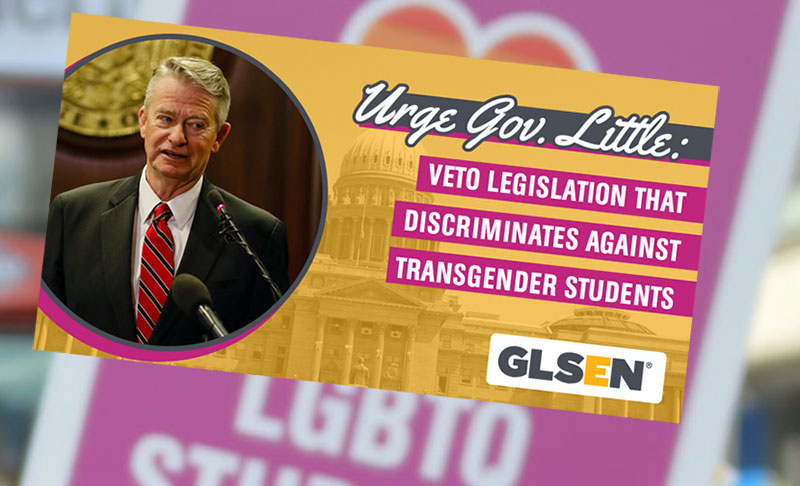 The nationwide LGBT group GLSEN, which targets schoolchildren across the country with destructive "gender identity" propaganda, has started a national campaign to get Idaho's Governor to veto this common-sense legislation protecting girls.

As people across the country are secluded by the coronavirus epidemic, a battle is taking place in Idaho that good people everywhere can help win!

This week the Idaho Legislature passed two important anti-transgender bills and sent them to the Governor to sign. This has ignited a firestorm in the national LGBT movement and the mainstream media. There’s now a nationwide campaign to swamp the Governor with threats and disinformation to intimidate him into vetoing those bills.

An Idaho State Representative has contacted MassResistance to help fight back!

There is good reason to be concerned, even though Idaho Gov. Brad Little is a “conservative” Republican. Back in 2014, as MassResistance reported, the legislatures in Arizona, Indiana, and Arkansas all passed pro-family religious freedom bills. But after public pressure from the LGBT movement, the GOP governors of Arizona and Arkansas caved in and vetoed them, and GOP Gov. Mike Pence of Indiana immediately pushed through a weak, pro-LGBT alternative bill which he then signed.

These are the two “anti-transgender” pro-family bills on the Governor’s desk:

Bill H 500, the Fairness in Women’s Sports Act, was passed by the Idaho Legislature and sent to the Governor’s desk on March 18. It says that only females may compete in girls’ or women’s school and college sports, if those sports teams or leagues are subsidized, licensed, or accredited by the government. If there is a dispute about the sex of the person, it outlines methods for a physician to make a determination. In other words, phony “transgender” girls who are actually males are not allowed.

This is such a common-sense idea that it’s embarrassing that a legislature has to get involved at all. The idea of “transgenderism” is medical quackery; no person can possibly change his sex.

The bill is overwhelmingly supported by parents. But it attests to the insanity (and radicalism) of the people running our educational system.

GLSEN is a national LGBT activist group targeting schoolchildren. It is a multi-million dollar organization lavishly funded by many of America’s major corporations. Among other things, it organizes the GSA clubs (originally meaning “gay-straight alliances,” now they are “gender and sexuality alliances”) and other radical LGBT programs in middle schools and high schools across the country. It’s also known for the infamous “Fistgate” scandal in 2000 where children were instructed about homosexual sex acts. More recently, it militantly supports the concept of “transgender” children.

GLSEN has quickly ramped up a national campaign to flood the Governor’s office with the LGBT movement’s propaganda line about “transgender” youth.

For example, here is what GLSEN is having people across the country email to the Governor:

I am writing to ask you to  VETO HB500, which would ban transgender students from participating in sports and create a dehumanizing process to “dispute” a student athlete’s gender before competing.

Participation in sports has a significant impact on students' well-being – including physical, social, and emotional well-being. Athletics instills in students vital lessons about leadership, success, failure, and self-discipline. It underlines the joys of being on a team.  Transgender students often want to participate in sports for the same reasons as any other student – so they can be a part of the team, stay healthy, and learn good sportsmanship.

There are so many problems confronting our society right now, especially with the rapid spread of COVID-19. It's appalling, then, that HB500 is deemed to be a priority in Idaho. We urge you to see reason and veto this dangerous, discriminatory legislation.

This is all such fraudulent nonsense. This doesn’t ban any student from playing on a sports team, or enjoying team participation. It just says that boys can’t play on girls’ teams. Moreover, what is actually “dehumanizing” is pandering to a child’s delusion that he (or she) is the opposite sex.

The legalized LGBT insanity which allows a person to have his birth certificate changed to reflect his “gender identity” and not his actual biological sex has also spread around the country. Besides being a lie and scientific quackery, it can disrupt everything from vital records and drivers’ licenses to medical care.

Unfortunately, in 2018, a liberal federal judge ruled that Idaho must allow people to officially change the “sex” designation on their birth certificates.

But Idaho Rep. Julianne Young has taken on that lunatic “transgender” movement. She authored Bill H 509, which passed the Legislature and went to the Governor’s desk for signing on March 18. And as Rep. Young explains, the Judge’s reason for the ruling was that the state statutes were unclear regarding birth certificate content. This new law tightens that up, as well as other pertinent legal concerns.

Not surprisingly, the pro-LGBT mainstream media went apoplectic.  CNN led the charge, publishing the most outrageous attack piece imaginable. Their article on H509 begins with an emotionally-charged video that suggests that bills like this constitute horrific “transphobia” which will lead to a torrent of hate and deathly violence against “transgenders.” 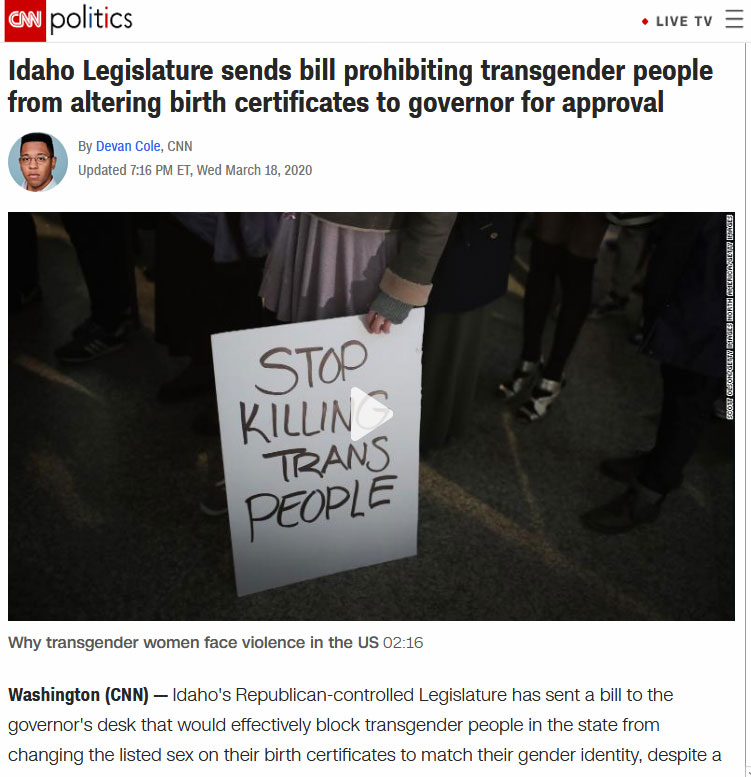 The CNN article also scolds supporters of the bill – that they should instead be fighting the coronavirus pandemic and helping “everyone come together” (even though the bill was filed months earlier).

[C]urrent state policy allowing transgender people to obtain accurate records has "reduced transgender people's risk of exposure to discrimination, harassment and violence" because it decreases the possibility of being unintentionally outed.

Rep. Young, who was interviewed by CNN for the article, describes here what she actually said to CNN, compared to what they reported in their terribly biased article. It reiterates their journalistic dishonesty.

What you can do right now

Good people everywhere need to act now and strongly encourage Republican Gov. Little to stand up to the LGBT pressure, and not cave in as so many other GOP Governors have. He needs to sign both bills into law!

You can do this even if you don’t live in Idaho:

Let’s stop the LGBT movement from further destroying our children and our society!