Why Judge Roy Moore matters now more than ever 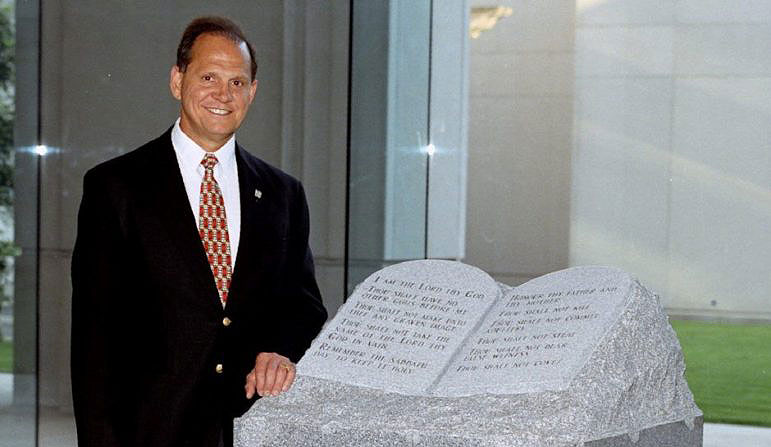 In 2001, Alabama Chief Justice Roy Moore stands next to the granite Ten Commandments monument which he had installed in the lobby of the Judicial Building.

Recently we all were reminded why Judge Roy Moore, who is again running for the US Senate in Alabama, is so hated by the Republican establishment, as well as the Left.

On February 20 the Fifth Circuit Court of Appeals upheld a lower court decision overturning Mississippi’s recent law banning abortion when a baby’s heartbeat can be detected. What shocked people was that one of the judges who signed the opinion was Judge Jim Ho, a Trump appointee who is considered a solid constitutionalist.

But as columnist Daniel Horowitz explained, people shouldn’t be surprised. The 1973 SCOTUS Roe v Wade decision says that abortion is a constitutional right. “Conservative” judges believe that a Supreme Court ruling is “the law” and lower courts may not contradict that. (Of course, leftist Obama judges have no qualms about contradicting anything.)

Of course, the US Constitution never intended the courts to do anything more than adjudicate between aggrieved parties. As Abraham Lincoln and so many others observed, the courts were not meant to have the sole power to decide Constitutional issues, and create new laws from that. It’s simply wrong, and causes much of the political anarchy we have today.

In his career Judge Roy Moore turned that all on its head. He did so very publicly, as a public official, and was willing to put his job on the line. Many rightly consider him America’s greatest conservative figure since Phyllis Schlafly. Two issues stand out:

The Ten Commandments. Every US state’s constitution references God or God’s law. In 2001, as Chief Justice of the Alabama Supreme Court, Judge Moore had a granite monument of the Ten Commandments installed in the lobby of the state’s Judicial Building – not in a courtroom, just the lobby of the building. Moore wanted to underscore the truth that America has always held that God’s law is the basis of civil law.

In 2003 a federal court decided that this violated a US Supreme Court ruling declaring that the United States must now recognize as constitutional the “separation of church and state.” which meant that no mention of God could be allowed in official life. Judge Moore said NO, he would not abide by that contrived ruling. So the Alabama Court of the Judiciary removed him from office.

In 2012, Judge Moore was elected again as Chief Justice of the Alabama Supreme Court.

Gay marriage. In 2006, Alabama voters overwhelmingly approved an amendment to the state constitution declaring that marriage is only between one man and one woman. In 2015, the US Supreme Court ruled in Obergefell that the US Constitution allows for “gay marriage. ” But Judge Moore ordered the state’s probate judges to obey the Alabama Constitution and refuse to issue same-sex marriage licenses.

The Southern Poverty Law Center filed a lawsuit to force the issue. When Moore refused, the Alabama Court of the Judiciary again removed him from office. The court said he had “demonstrated unwillingness to follow clear law.” But that’s the point – the Obergefell opinion was not a “law” at all.

Are there any other “conservative” judges in America who would stand up and do the right thing, no matter what?

Left-wing public officials constantly trash traditional values and become hysterical if anyone even disagrees with them. As a result, right-wing officials everywhere have kowtowed and become whimpering cowards. It’s now the GOP establishment’s modus operandi, from top to bottom.

But not Roy Moore. He has been fearlessly outspoken on more of the Left’s sacred-cow “culture war” issues than any conservative public figure. He has reminded people that putting a child into a home to be raised by two homosexuals is a terribly dysfunctional environment and harmful to the child. He has praised Christian values in government. He has described LGBT behaviors as perversion. He has publicly rejected the theory of evolution, pointing out that there’s no actual scientific evidence of it. He has talked about the dangers of Sharia law coming to the United States.

A man like Judge Moore, who doesn’t just rock the boat but capsizes it, has sworn enemies from two directions: the Left, and the Republican establishment (that wants to “get along” and not make waves). So it’s no surprise that when Roy Moore won the Republican primary for US Senate in 2017, both groups had him in their crosshairs.

And we all know what happened next.

As much as conservatives across America were sickened by the disgusting fabricated “sexual predator” lies about Judge Brett Kavanaugh during his confirmation hearings, those paled in comparison to the absurd lies and bizarre distortions about Judge Moore that were flooded into the public forum in the weeks before his US Senate election.

Enough has been written debunking all the fabrications against Moore.  The Left and their allies in the mainstream media piled on. The assault on his character was incredibly sleazy and dishonest, but sadly, it did its job.

But the real disgrace was on the Right. Unlike with Kavanaugh, the Republican Party threw Roy Moore under the bus. And even the major pro-family groups, including one that had raised money on Roy Moore by having him at their national conference just weeks earlier, turned their back on him. Why? Because of their fear of his acting or speaking honestly on those issues – which ordinary Americans are faced with every day. (Even now, a major conservative political site declined to carry this article.)

I spoke to Judge Moore a few months ago. He is not like normal, weak men. He’s not letting up a bit. He is certainly not quitting. He’s a true inspiration in these dark, “culture war” times.

If America had just a few more leaders like him, we’d be in much better shape. 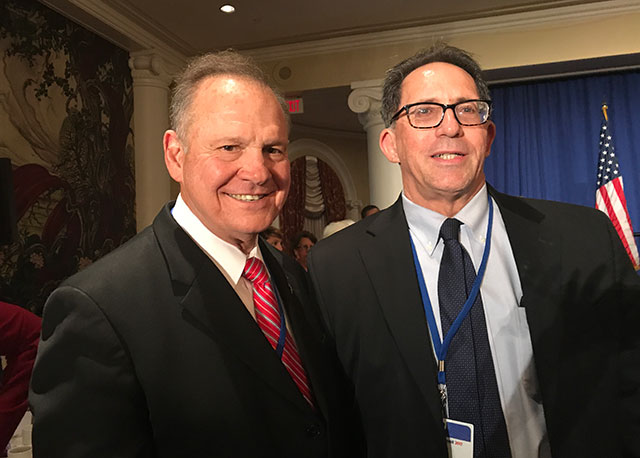 Judge Roy Moore (left) with Brian Camenker of MassResistance at the 2017 Values Voter Summit - before the mainstream pro-family groups abandoned him.