Parents organize and successfully fight back! 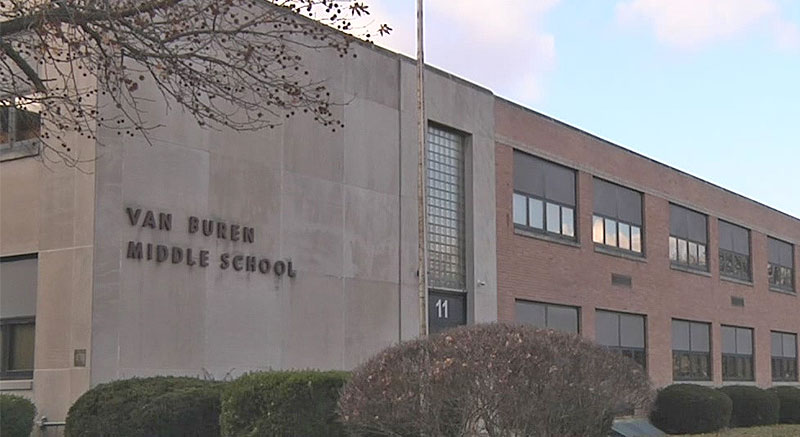 LGBT activists and their allies among school officials are targeting young schoolchildren like never before with their aggressive agenda. Most of it happens without any parental knowledge. But when parents are organized and guided they can successfully fight back!

Kettering, Ohio, a suburb of Dayton, is a relatively conservative community where parents had not expected to have to deal with radical LGBT ideology in their middle school. But in fact, conservative areas are now being aggressively targeted throughout the country.

In October 2019, the Van Buren Middle School in Kettering held a bizarre school-wide assembly that parents were not informed about. It featured an alumnus of the school, an openly “gay” comic and voice actor named Maulik Pancholy (from “30 Rock” and the cartoon “Phineas and Ferb”). At the time, he was engaged in a book tour in the Dayton area, and came to his old school – which had a disturbing connection to his book. 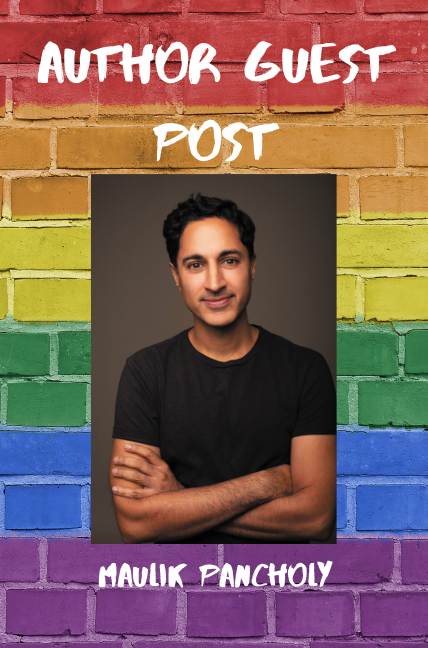 Maulik Pancholy does not try to play down his "gayness."

His book, “The Best At It,” is a fictionalized account of his time in the 6th and 7th grades when he began to have an attraction to other male students. The publisher describes it as, “A hilarious and heartfelt middle grade school debut about a gay Indian American boy coming into his own.” 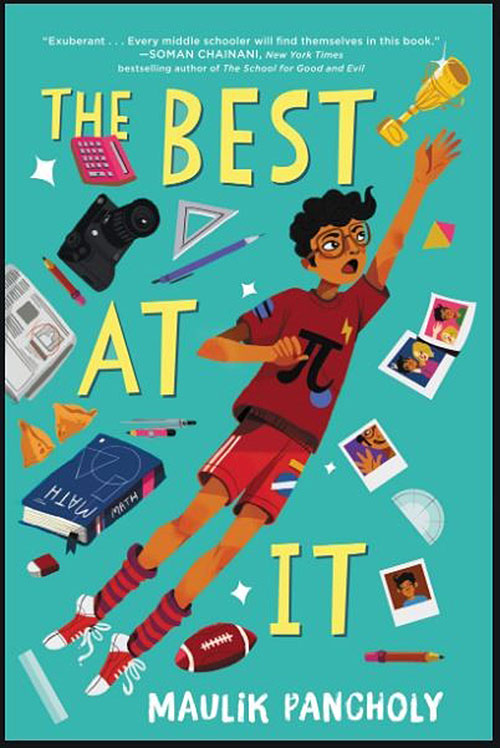 In an interview about the book, Pancholy makes it very clear that he wanted to promote homosexuality to kids and normalize it as healthy, despite any accompanying mental health problems:

Rahul’s [the main character’s] perfectionism and his need to win are 100% about proving his self-worth in a world where being different makes him feel less than. And his queer identity is one layer of that for sure. I just want to say, though, that it was important to me not to pathologize being gay. His mental health struggles are not because he’s gay. It’s the feeling less than, the wanting to fit in, that is stressful for him. And I think there’s something universal about that. What kid–or even adult–hasn’t felt like an outsider at some point?

At Van Buren Middle School, according to reports, the student assembly with Pancholy turned into a “Coming Out” promotion, with the actor telling kids, “Don’t be afraid to embrace being gay if that’s how you feel” and that “it’s OK to be gay.”

And of course, Pancholy's celebrity status will likely get kids to look for him on the Internet. They'll find him featured in homosexual websites that also include perverted gay-sex articles.

When one of the parents, Julie, found out from her son what had happened at his school, she contacted MassResistance. We helped guide her to get the word out to inform and organize parents to take action against the school and the district to stop this LGBT promotion from happening again.

She began by passing out flyers to parents picking up their children from the school at the end of the day: 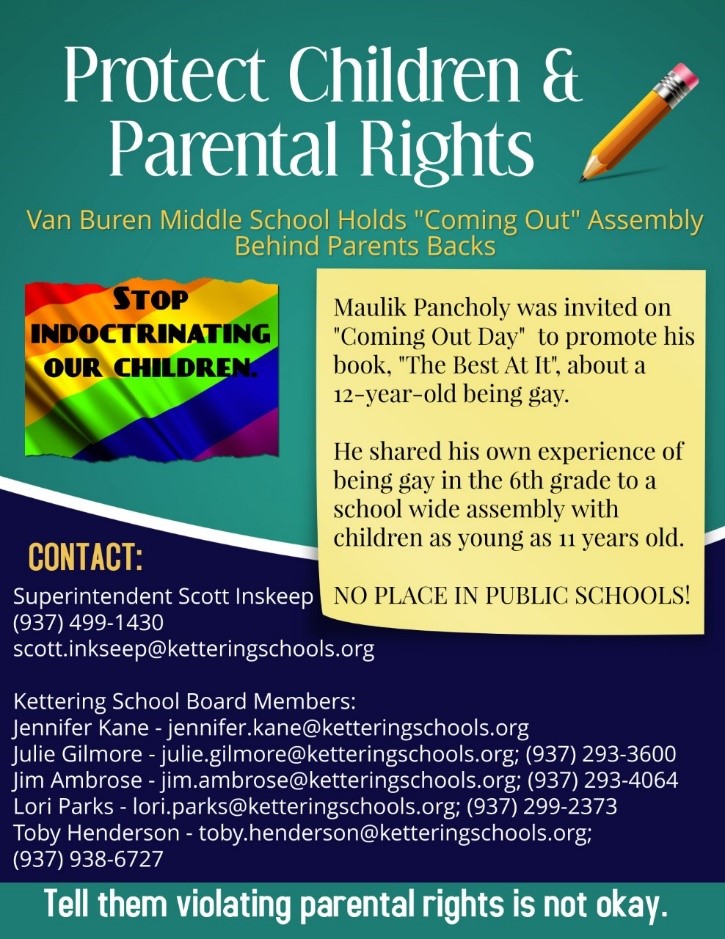 Julie and other parents passed this out at the school and emailed it across town.

She then emailed a “call to action” to parents at the middle school and across town, and encouraged them to join her local MassResistance group. They began meeting to discuss the next steps they would take.

A week after the “gay” assembly, one of the other parents told Julie that there was a horrible LGBT survey given to all the students at the end of the previous year. As with other aspects of that agenda, it was apparently done in secret with no parental notification.

Julie immediately contacted the school and requested a copy of the survey, which they emailed to her. She and the other parents were shocked when they saw it. The first two questions were:

How do middle school students (grades 6-8, ages 11-13) even answer these? The last question was:

A common push by LGBT activists is to encourage a child find a “trusted adult” other than his parents that he can share intimate issues with.

These kinds of surveys are shrewdly designed somewhat like push-poll questions. They lead kids’ minds into directions they had not been thinking. The surveys matter-of-factly ask about deviant behavior in a way to make kids think it’s normal, and even abnormal if they’re not engaging in it at some level.

The other questions were about the student’s exact race and ethnicity (an obsession for the education establishment but having little relevance to middle school students), and several questions about how the student “feels” about school. (So-called "social-emotional learning" — focusing on students' feelings — is another educrat fad.) Read the entire survey here.

Having uncovered these two offensive activities in the schools, there came the frightening question: What things have been pushed on our children by the school that we don’t know about?

It was clear that the push to normalize LGBT behaviors in young students was something the parents needed to derail before it got further out of control.

At the very least, Julie and her MassResistance group were adamant that such invasive and inappropriate surveys and assemblies not take place in the Kettering schools.

They continued reaching out to friends, neighbors, and local churches to get more and more people informed and aware of what had happened at their middle school. They also made sure that they communicated their outrage with all the key decision-makers and responsible elected officials.

The group decided that they would attempt to meet and work with administrators (including the superintendent) first, before attending the school board meetings.

After many emails and phone calls to the principal and to members of the school board, the school district Superintendent finally met with Julie and other members of the Ohio MassResistance team in mid-November.

MassResistance activist parents have faced unfair pushback from many school boards and superintendents, but not in Kettering. These parents were very clear about what they expected from the school district.

Julie told the Superintendent: “If you allow an LGBT event at the school, then why not allow a speaker who used to live the gay lifestyle but got out of it? And all of this is taking away from kids’ time to learn!” The Ohio MassResistance team also insisted that all surveys that were intended for the students must get the approval of the parents first.

Julie reported to us that the meeting went very well! The Superintendent agreed to all the demands brought up by the parents! He obviously could see that these parents were backed by many more across the community.

At the meeting they agreed upon the following:

This is the kind of action that parents need to take. There were a number of reports throughout the greater Ohio area, and even on national pro-family news sites, about the shocking decision by Kettering Schools to allow an openly gay actor and LGBT activist to host an assembly. These were valuable in informing people.

This is pro-family activism that makes the difference, and MassResistance is the only group that does it. Unfortunately, we are dealing with school officials and others who have no moral compass do not care how their hideous actions affect young children. We will keep you posted about the ongoing battles across the country!