MassResistance sends copies of our Romney book to every GOP US Senator, Pres. Trump, VP Pence, and major media

His appalling impeachment vote is just the latest outrage! 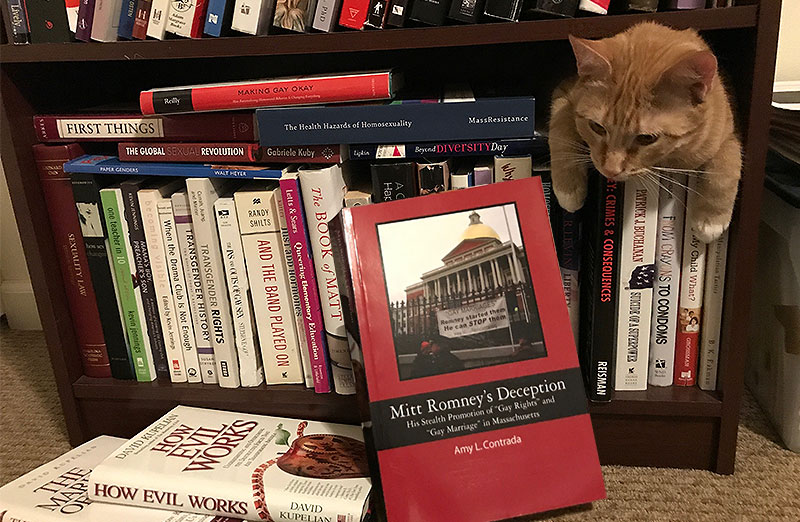 The book "Mitt Romney's Deception" should be on every conservative's bookshelf - even the kitten agrees!

On Feb. 5, US Senator Mitt Romney (R-Utah) became the only Senator in US history to vote to impeach a President from his own party. Republicans across America were outraged. Especially galling was that Romney ignored the unconstitutional aspect of this absurd impeachment hoax.

But the outrage was particularly intense among Republicans in Massachusetts, where Romney served as Governor from 2003 to 2006 – and left a trail of selling out to the Left.

In particular, Romney became a stealth champion for the LGBT movement. Romney presided over the “gay marriage” horror after the Massachusetts Supreme Judicial Court voted 4-3 in 2003 to (unconstitutionally) impose “gay marriage” on the state – the first anywhere. And he openly helped the LGBT movement push their agenda in the schools and other areas of society. None of this would have happened then without Romney’s help. 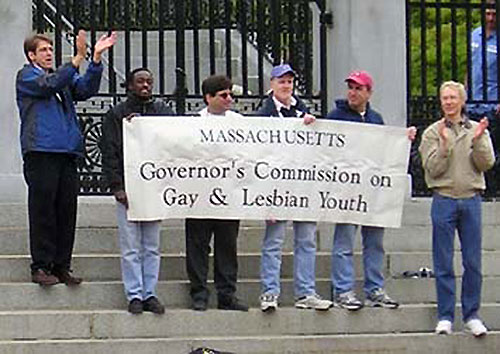 Romney's "Governor's Commission for Gay & Lesbian Youth" caused destruction across the state. Here are some of the commission members on the State House steps watching a "Youth Pride" parade pass by. [All photos by MassResistance] 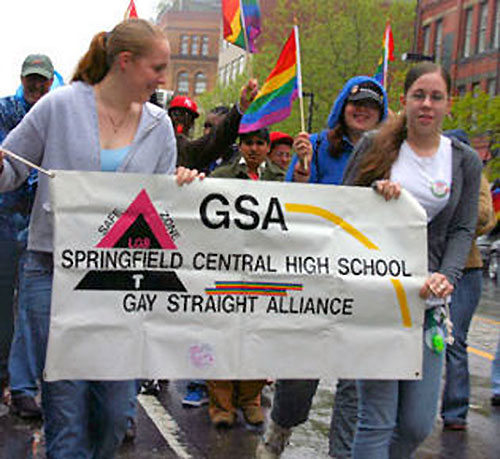 During Romney's term, "Gay-Straignt Alliance" clubs were set up in schools across the state.

Romney's support for the LGBT movement goes back to his 1994 US Senate race against Ted Kennedy. During that campaign, he promised the homosexual activists that he would be a stronger LGBT advocate than Kennedy! 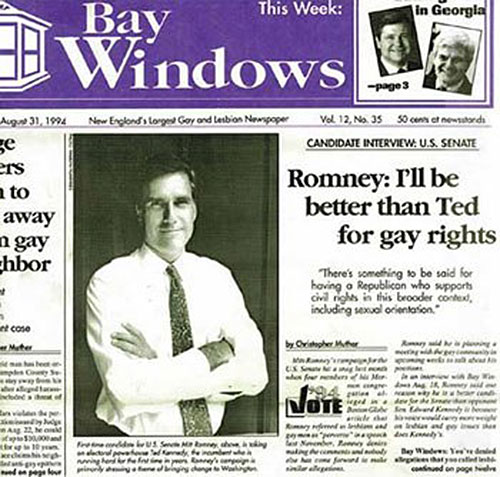 The front page of the Boston-based homosexual newspaper "Bay Windows," August 31, 1994, during the US Senate campaign.

During his campaign for Governor, he continued to forge close ties to the "LGBT community." This was handed out during the "Gay Pride" parade several months before the election. 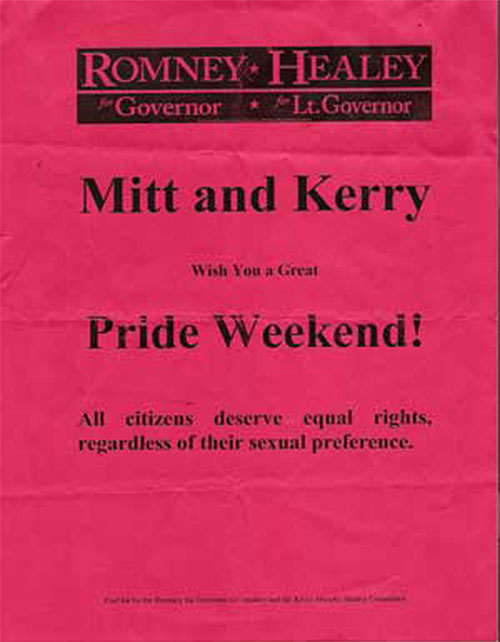 Handed out at "Gay Pride" events in Boston.

And as Governor, he openly allowed the LGBT movement to push their agenda in the schools and other areas of society, including the Dept. of Public Health.
So in 2011, our own Amy Contrada, MassResistance research director, published a landmark book, Mitt Romney’s Deception – His Stealth Promotion of “Gay Rights” and “Gay Marriage” in Massachusetts. This 637-page paperback covers the waterfront on this issue in great detail. It is the only documented history of how “gay marriage” came about in the state. 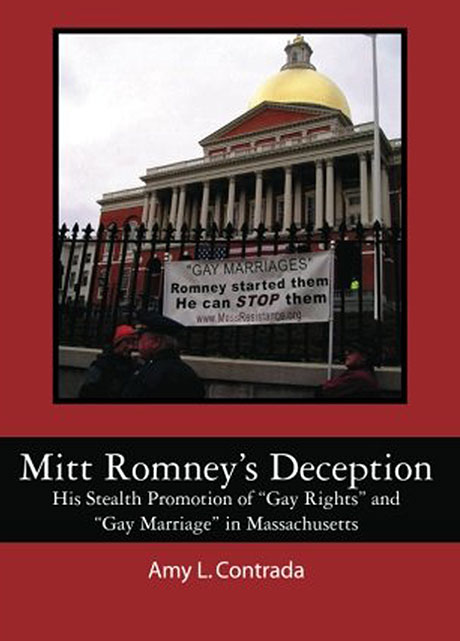 Running for Senator in Utah

In 2018, when Romney ran for US Senator in Utah, his opponent in the GOP primary was a solid conservative, Dr. Mike Kennedy. During the campaign, MassResistance was invited on several conservative Utah radio stations to sound the alarm about Romney’s treacherous anti-conservative background. But RINO donors and the liberal media backed Romney fiercely (not surprising) and he won the primary and general election. President Trump endorsed him then, despite Romney’s vicious anti-Trump public statements in 2016!

Sending our Romney book to the Washington DC politicians!

A few days after Romney’s treacherous impeachment vote, one of our Massachusetts supporters – very upset at Romney’s terrible betrayal  – sent us money to send copies of the book to every GOP US Senator, President Trump, Vice-President Pence, and some national media outlets. We don’t really have the staff to take that kind of project on, but this time pulled it together and got it done!

Will it make a difference? If any of them take the time to read it, we think it will!

An important chronicle of moral and political moral treachery

You can get this interesting (and maddening) historical book, too! It is available on Amazon for only $19.95. You will learn not only the depth of Mitt Romney’s anti-family actions, but also how this was a model for so much of what we see happening across the country today.

It brings you behind the scenes and gives you important historical background on how both “gay marriage” and the LGBT agenda in the schools and government blossomed in Massachusetts – before migrating across America and beyond.

It documents Gov. Mitt Romney’s pro-LGBT activities as governor – both public and behind the scenes: 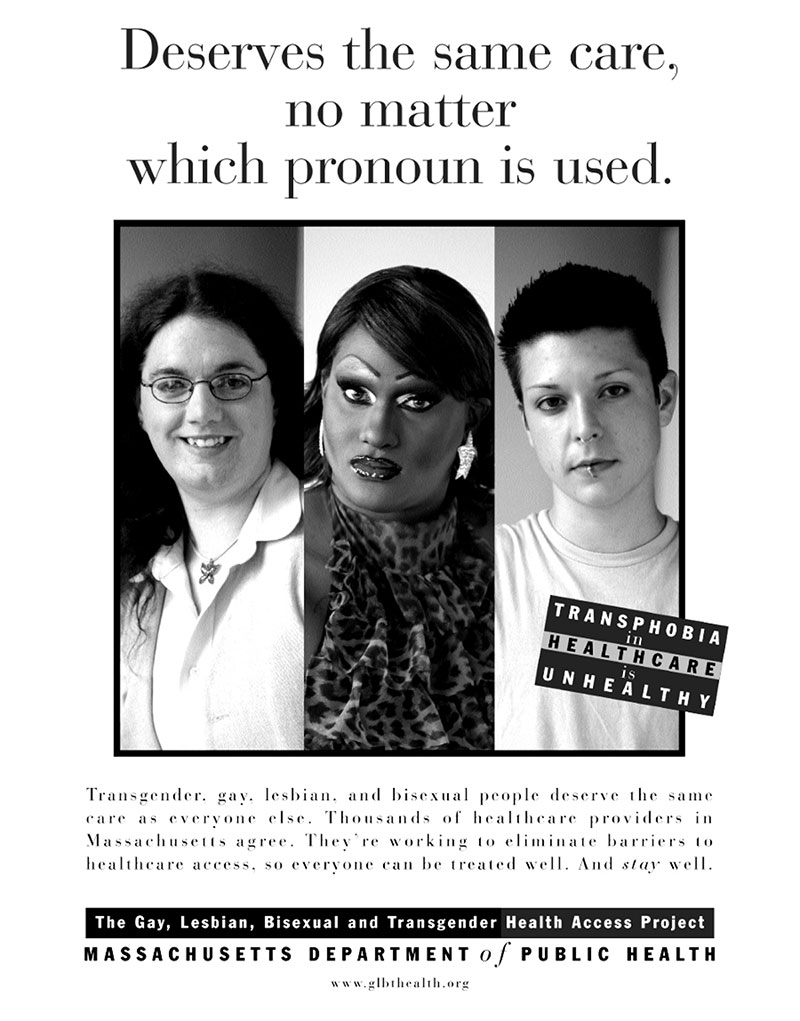 Romney's Massachusetts Department of Public Health was an early crusader for legitimizing and celebrating the transgender movement in the eyes of the medical community.

Romney could have – and constitutionally should have – stopped “gay marriage” from being implemented in Massachusetts. Even Phyllis Schlafly (and other national figures) got involved in the movement to try to persuade him to do the right thing. Instead, he and his administration worked with LGBT activists to implement it as quickly as possible.

In April 2004, Brian Camenker of MassResistance (standing at right) led a rally in the Massachusetts State House against the court's unconstutional "gay marriage" ruling. 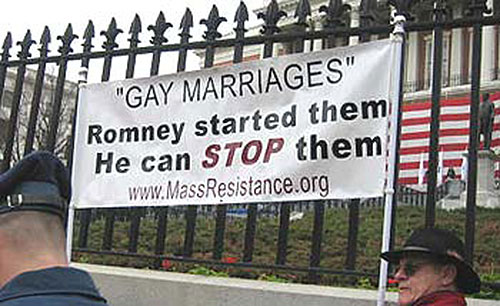 A banner outside the Massachusetts State House.

The conservatives' message to Romney was: "Follow the Constitution." 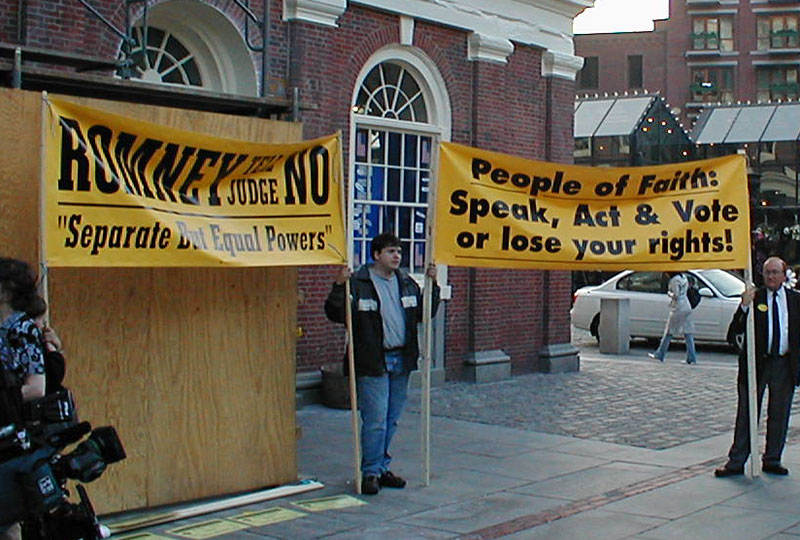 Banners held outside Faneuil Hall in downtown Boston. (Amy Contrada is on left edge of photo.)

You will also get an inside look at how the LGBT movement got an early start in the public schools, before Romney became Governor.

Here is the book’s Table of Contents:

Also available on Amazon are two eBook excerpts from the book: “How ‘Gay Marriage’ Came to Massachusetts: Gov. Mitt Romney’s Failure in a Constitutional Crisis,” and a record of the LGBT push in the schools during Romney’s administration, “Romney vs. Family Values: His Administration’s Homosexual Programs Targeting Children.”

These are two of the major sections of the larger book, for people who want to home in on those specific subjects. 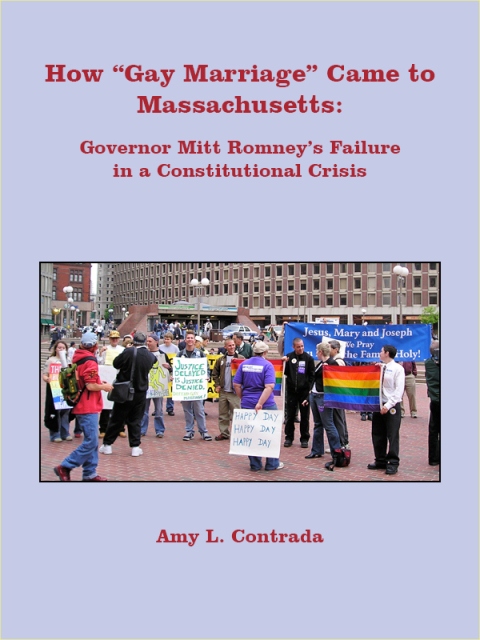 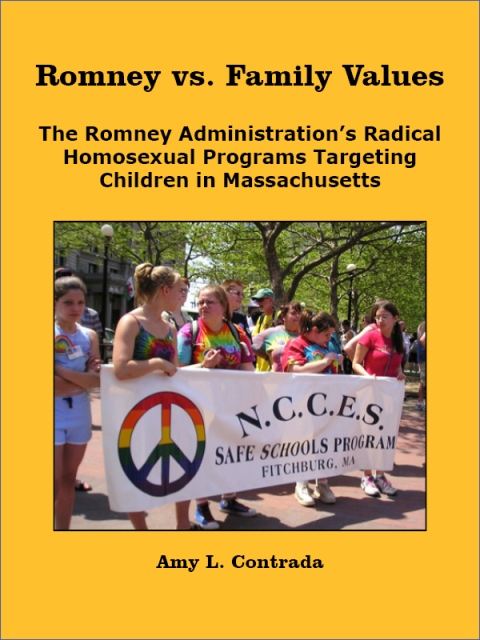 These bring you behind the scenes and give you important historical background on how both “gay marriage” and the LGBT agenda in the schools and government blossomed in Massachusetts – before migrating across America and beyond. 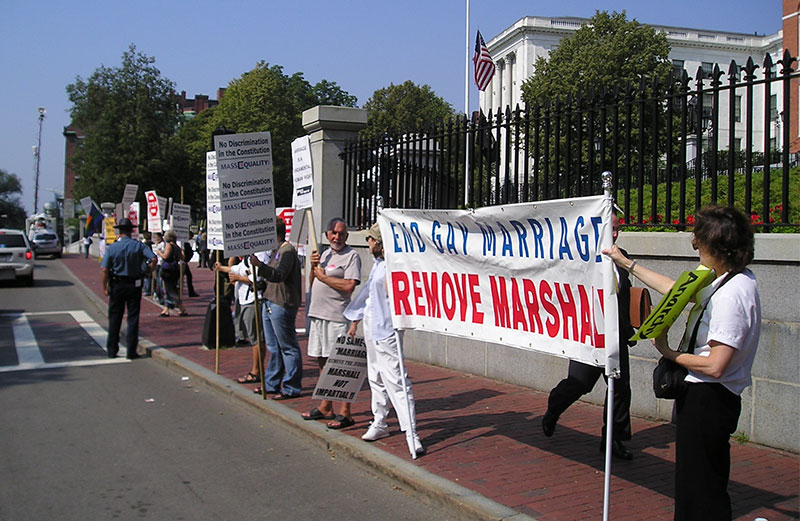