A wave of vitriol and intimidation descends after library cancels event in wealthy NYC suburb. 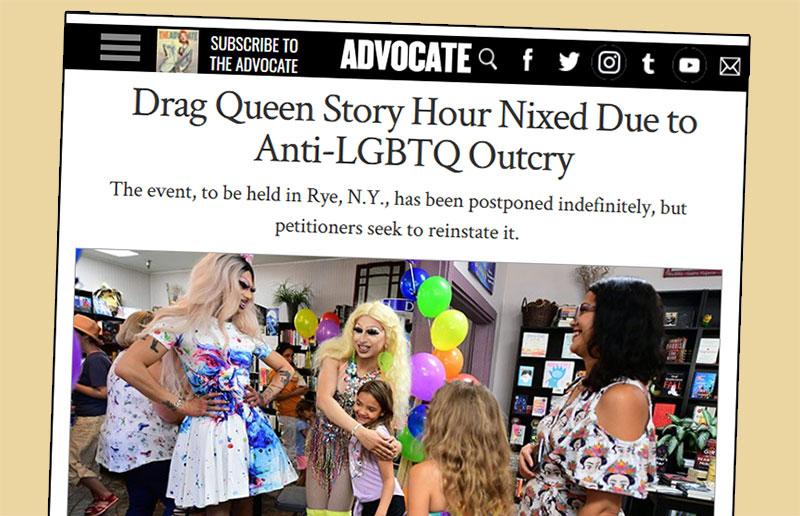 The national LGBT movement and their unhinged local activists unleashed a flood of anger, attacks, and intimidation efforts against a courageous band of parents after MassResistance helped them successfully persuade the local library in Rye, NY, to cancel a “Drag Queen Story Hour” (DQSH) event.

LGBT activists even tried to shut down the small local newspaper in the town after it published an unbiased article about the incident. Rye is a small (population 16,000), fairly wealthy suburb of New York City that rarely sees this kind of controversy – especially generated by conservatives.

But the parents are not intimidated or backing down, and they’re fighting efforts by the national LGBT movement to bring back the DQSH event.

On January 17, John and his wife, parents of three children in Rye, contacted MassResistance. They had seen the advertisements for the DQSH event coming to their public library on February 8. “How does one go about rallying people together against this?” they asked. We already had a New York MassResistance chapter, and we were able to help them get right to work!

Over the next week, working with a local attorney and others, they put together a detailed, strongly worded formal complaint letter using the library’s own “patron complaint form.” Read the complaint letter here.

The library cancels the event!

They distributed copies of this across town – via churches and people simply giving copies to their friends. People were outraged when they saw it. Many submitted their copies back to the library. John’s group of parents collected dozens of other letters from people and delivered them. As the library later acknowledged, it was quite overwhelming; they got a veritable flood of these complaint letters, and emails of scanned copies of it.

On January 28, the library issued a statement saying that the event had been cancelled.

That evening, on January 28, the Library Board of Trustees held their regular meeting, and many parents from the community joined John to bring up their objections. John reported that the Board was receptive to their concerns and said they didn’t even know about the scheduled event. The Library Director was present but did not speak at the meeting. John also learned that library benefactors were very dismayed and instrumental in stopping this.

The hard-copy issue of the local Rye Record newspaper came out that day and included a startling editorial about the incident, Drag Queen Story Hour Deferred, but Controversy Ensues. The article was a common-sense reaction to this bizarre event, which included lines such as:

What happened to bringing joy and delight to our children and grandchildren, rather than assaulting them with political correctness?

But starting the next day, January 29, the ugly LGBT harassment campaign started. A barrage of vicious attacks on the parents began. They were labeled as bigots, and worse. One local woman wrote on Facebook that one of the parents, a mother, is “the face of hate.” Anyone who responded in a way that was not “pro-LGBT” was censored or bullied.

Even the district's Congressman, Eliot Engel, attacked the parents: 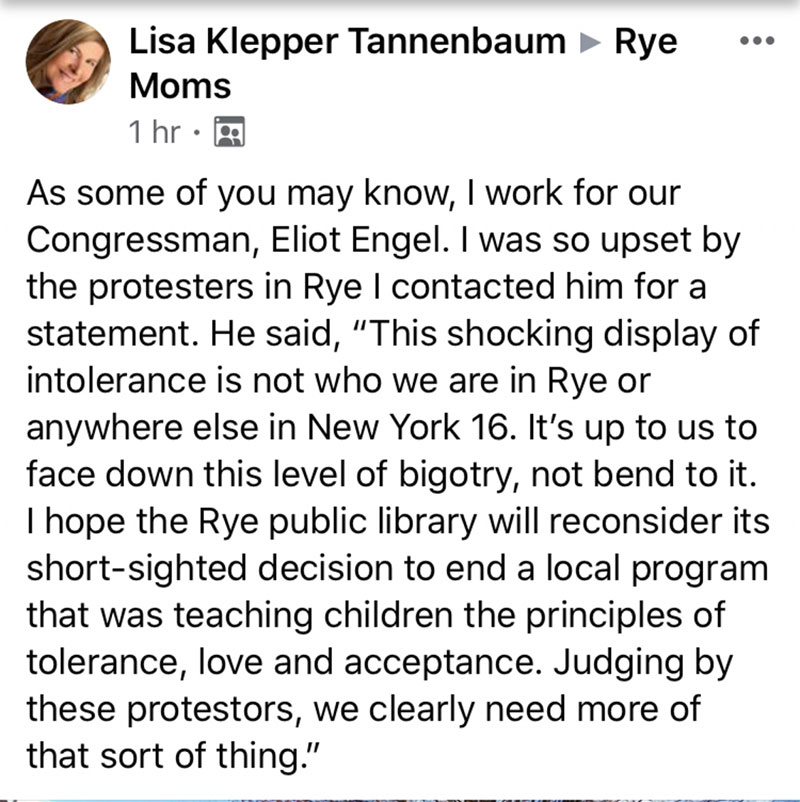 The pro-LGBT crowd also posted a nasty petition attacking the parents and demanding that the DQSH event be brought back:

Unfortunately, DQSH has been interpreted as threatening by a small but vocal group of citizens, who, in their ignorance, have taken a children's event about gender identity, inclusiveness, and acceptance and conflated it with sexual identity, sex work, and pedophilia.

The petition has collected nearly 16,000 signatures, apparently from all over the world, but only 456 (as of this writing) are actually from Rye.

One pro-LGBT woman confronted a mother from the parents’ group and two of her children outside of their Catholic church (where they had been at Catechism class). The woman screamed at them about their opposition to the DQSH event. But the mother and her kids just walked away and refused to be intimidated.

They later found out that the woman who confronted them is one of the local LGBT leaders. She is a mental health counselor (!) who assists families in helping children to “transition” to the opposite sex (or “gender”). In other words, her activism is also her business.

The Rye Record article about the cancellation was branded as “homophobic” by the LGBT mob. According to parents, they not only attacked the editors, but threatened advertisers – and a number of them decided to delay or withdraw their advertising.

Library backs away from its original common-sense decision

But of course, the LGBT movement was not satisfied. They want their full Drag Queen event with young children in the library right now!

The media deluge – national and local!

The national LGBT movement and their allies in the media (and everywhere else) are certainly well-coordinated and work fast. It’s almost unbelievable!

On January 31, it all hit at once. It’s generally the same theme: denouncing the horror of this fine educational program being derailed by ignorant bigots.

Here are some examples of what was published that day:

It was as if the whole LGBTQ+ world was pouncing on them the same day! And of course, that’s what they wanted the people in Rye to think.

The parents fight back

But instead of cowering, the parents’ core group met and laid out their plan to fight back.

On Feb. 6, they got their letter published in the Rye Record, titled Library Needs to Regroup and Rethink its Programs. It showed that the parents were standing their ground on their demands that the program not come back.

That evening, John and others addressed the Rye City Council. He used his time to denounce the climate of fear being generated by vicious attacks, incivility, and bullying from the LGBT activists targeting the parents who simply disagree with their agenda. For all their loud cries of wanting tolerance, inclusion, and acceptance, John told the Council members, these people are themselves aggressively doing the exact opposite – and it’s hurting their entire town.

The next day, Feb. 7, the parents posted their own petition to gather support in the community to keep the Drag Queen event out of their library for good. Titled Stop Politicizing Children’s Programming at the Rye Library: Reject Drag Queen Story Hour, it lays out the arguments in logical and straightforward terms. It focused on attracting the signatures of local residents, unlike the LGBT petition which is going for worldwide numbers. So far, the parents’ petition has almost 1,000 signatures.

On February 8, the day the Drag Queen event was supposed to take place, parents gathered in front of the library and held signs and prayed – to show the town that they were not afraid of standing up in public. Some LGBT activists came by and tried to intimidate them, but their efforts fell flat.

The parents gather outside the Rye Public Library (in background) on Feb. 8. Their signs include "Honk for Purity." [Photo: New York MassResistance]

After the library gathering, the Rye Record published a link to the parents' petition in a prominent place. It was important psychologically because it showed the town that lots of people were standing up to this, and are not intimidated by the vicious attacks by the LGBT movement.

The town has not capitulated to the LGBT pressure!

In just about any other place, especially in liberal New York, the entire town would have capitulated to the LGBT pressure, especially with so much of it coming from powerful forces outside. But that isn’t happening.

The Rye Record published an article on Feb. 13 that captures the situation pretty well: Expanding the Community Conversation on Diversity. It quotes from the library director. It also shows (as we’ve seen in so many other places) that it’s the radical pro-LGBT library staff that is behind the crusade to “educate” children on these perverted topics.

If more cities hired library staff who were not ideological and sexual activists, libraries would be the useful and enjoyable places they used to be. But it’s up to fearless and principled parents like John and the others to stand up. This fight isn’t over, but it’s going in the right direction. We’ll keep you up to date on what happens!