The Left reacts by spewing hate, viciousness, and lies.

Our side is not intimidated. 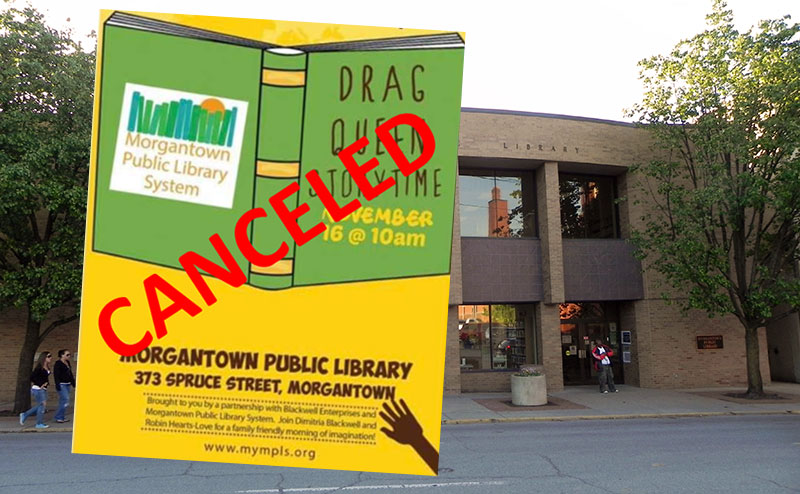 The Morgantown Public Library and its advertisement for the Drag Queen event - which then got cancelled!

The event was all ready to go – then suddenly it got cancelled! It's a great lesson in hard-hitting pro-family activism.

In Morgantown back in November, our West Virginia MassResistance chapter helped a relatively small number of pro-family activists stop a particularly horrible “Drag Queen Story Hour” (DQSH) from happening. The event was organized by the library staff and strongly supported by a very large, local pro-LGBT contingent.

Although the state of West Virginia is relatively conservative, Morgantown (located just south of Pittsburgh) is dominated by West Virginia University and other local colleges. It has become a center for LGBT activism in that region.

Cindy Frich of Morgantown was elected in 2003 to represent her city and the district in the State House of Delegates (similar to the House of Representatives in other states). She has been elected on and off since then, and her last term ended in 2017.

Since leaving office, she has been very active in fighting for faith and family in northern section West Virginia. She ran for office again in 2018 but lost to Danielle Walker, a left-wing activist.

On Nov. 3, 2019, Cindy discovered that the Morgantown Public Library had scheduled a Drag Queen Story Hour for November 16 – just two weeks away. She immediately began getting the word out to the public on social media.

Texas MassResistance leader Tracy Shannon noticed Cindy’s posts and forwarded them to our team. Arthur Schaper, our National Organization Director, contacted Cindy and offered to help – an offer she gladly accepted. We have activists scattered across West Virginia, as well as other activist contacts from past projects. It wasn’t a large group, but everyone got right to work.

MassResistance reveals who the “Drag Queens” really are!

Tracy Shannon’s research on the “Drag Queen” who were scheduled to read to the children – Paul Liller, aka “Dimitria Blackwell,” and another whose stage name is “Robin Hearts-Love” – quickly uncovered a very disturbing social media trail of photos and other depraved homosexual and transgender posts of events they were part of.

From the library's advertisement of the event.

Tracy and her Texas MassResistance team posted the dossier of “Robin Hearts-Love” and “Dimitria Blackwell” online for the public to see. 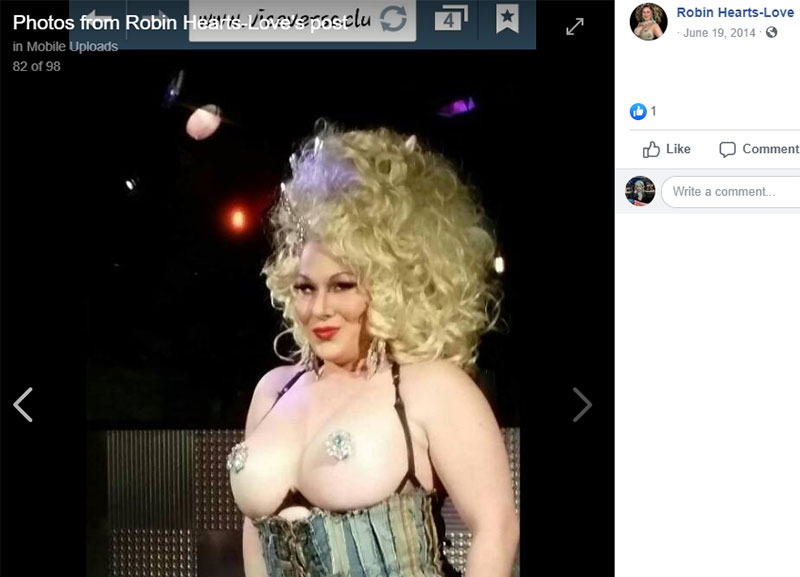 "Robin" posts this of himself. 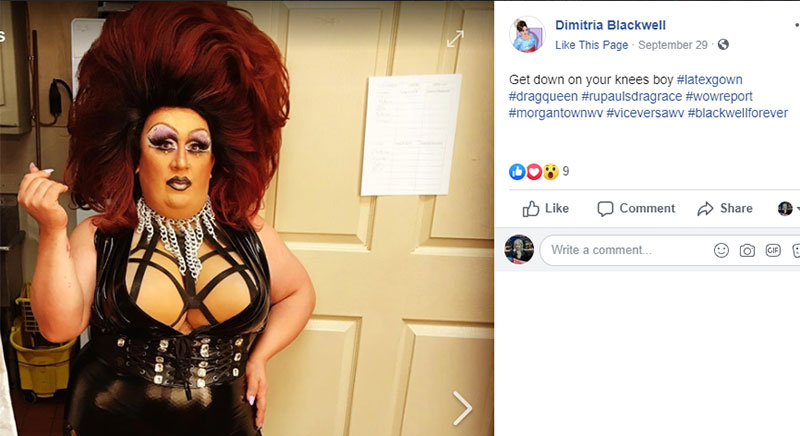 "Dimitria" posts this of himself.

This is a more honest depiction of their lifestyle.

Among other things, “Dimitria Blackwell” was advertising a depraved looking “adult” show he was performing in the night before the Nov. 16 Drag Queen event. 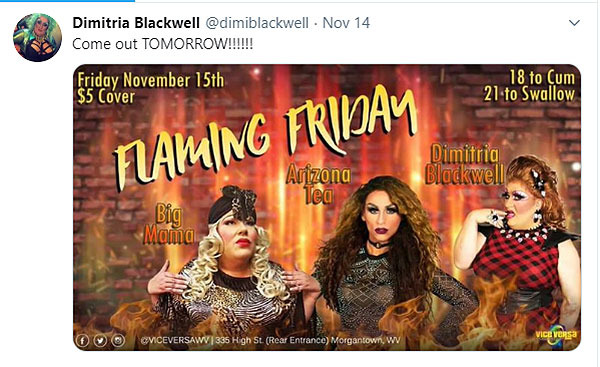 Plus … Convicted of theft!

And it gets worse: Like so many other Drag Queens we’ve looked into, there’s a criminal record involved. Tracy discovered that Paul Liller (“Dimitria Blackwell”) had been convicted of theft in 2016. He pleaded guilty to stealing money from, of all groups, an LGBT “community center” ” – the Gay, Lesbian, Bisexual and Transgender Community Center of Baltimore and Central Maryland – where he held leadership positions.

Arthur Schaper filed a Freedom of Information Act (FOIA) request for the records of any background check the library made for “Dimitria Blackwell.” They were forced to admit that there were none.

Role models? It’s always amazing that the LGBT activists continue to claim that the Drag Queens in libraries are “role models for children.” Virtually every one of them has a trail of horrible depravity and/or criminality connected to him. And we’re lectured that we must accept all this under the guise of “tolerance and love.”

Stopping the event – the pro-family campaign is successful!

Armed with this extremely disturbing information, pro-family people began a campaign of contacting the Morgantown Public Library, the City Council members, and the Monangalia County Commissioners – and demanding that this program be stopped!

They also announced that parents would be coming to protest outside the event.

The library staff seemed unconcerned, and sometimes hostile toward those objecting. But the politicians were taken completely off guard. Many had no idea this was even happening. And they were certainly not prepared to defend the obscene findings from West Virginia MassResistance.

On November 15 – the day before the scheduled event – Arthur received a phone call from one of our activists. She informed him that the Morgantown Library had officially cancelled the Drag Queen Story Hour!

Arthur immediately contacted the Morgantown Library to confirm that the event had been cancelled.

They emailed him back this dishonest message, which they also posted on social media:

The Morgantown Public Library System (MPLS) regrets to announce that, due to multiple threats of violence against the volunteer readers, Drag Queen Story Time scheduled for November 16 is cancelled. MPLS remains committed to fostering a love of reading for all ages and interests and to serving a diverse community.

Especially when talking to the media, the librarian went to great lengths to blame opponents of the program for calling in death threats and other harmful remarks. Of course, nothing could be further from the truth. LGBT activists and the Drag Queens who put on DQSH events will often claim that death threats or vile attacks came their way, and thus they were intimidated into cancelling the program.

In fact, the LGBT activists do not want to admit the real reason these events get cancelled: That the libraries are getting so much heat from the public. One report indicated that over a hundred pro-family protesters were heading to the Morgantown library the day of the event. That could have led to a very embarrassing situation for the city.

Arthur Schaper then filed a series of additional FOIA requests to get to the bottom of these alleged death threats:

First, Arthur requested all records the Library had of any threats directed at them regarding the DQSH event. They answered him that, “There are no records responsive to your request.”

Then Arthur requested copies of the emails sent or received by library staff regarding the DQSH event. The emails he received revealed that the library staff definitely worked closely with the LGBT activists to set up the event, and they strategized on how to deal with opposition to it. The emails rather casually referenced cancelling the event because of “death threats” but did not mention what the threats actually were, or what they might have said. It appeared to be a tactical move.

Arthur also requested copies of any police reports regarding threats directed at the library regarding the DQSH event. According to a police report, one of the social media posts of the DQSH event by Cindy Frich had some comments below it by someone else that “could be perceived as veiled threats.” (Not actual threats – those are commonly made on social media targeting conservatives by the Left.)

The news of the cancellation was covered in a particularly dishonest way by the local Morgantown media and even the Associated Press. They posted lurid headlines about “violent threats” and got quotes from sobbing LGBT groups (but no pro-family groups). They didn’t bother to even minimally investigate whether there actually were any threats, or what the threats said. (If it were pro-family groups making that claim, the media certainly would insist on details.) 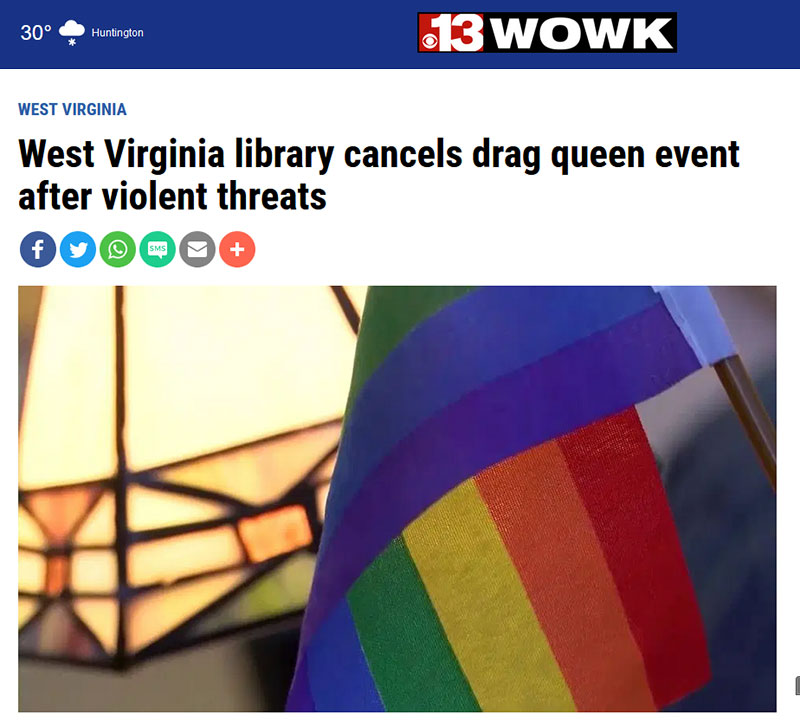 A Local TV station in nearby Charleston, WV.

On November 16, the day the DQSH had been scheduled, nearly 100 LGBT activists gathered in front of the Morgantown Public Library in a rally in support of the cancelled event. Even State Delegate Danielle Walker came and joined it and posted a video.

This is very revealing about the mindset of these people. After all the depraved things that were revealed about these “Drag Queens,” as well as Liller’s criminal conviction, these activists believe so strongly that these two should be reading books to other people’s children that they’re willing to come and hold signs in front of the library about it. Translation: They don’t care about children as much as they care about their twisted agenda for society – which clearly includes grooming little children for the “LGBT lifestyle.” 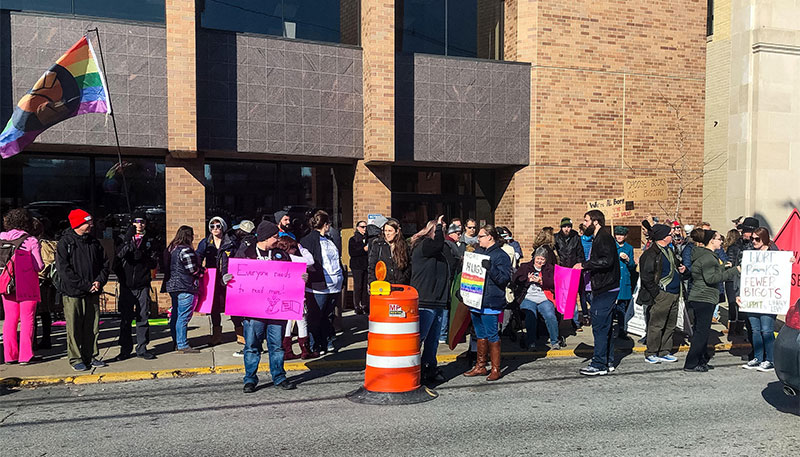 The vile LGBT movement does not take defeat gracefully. They did not expect any serious opposition to push back on their program in Morgantown. When Cindy announced that we had successfully shut it down, they went after her viciously on social media.

We’ve collected screen shots of quite a bit of it from both Facebook and Twitter. It is also an interesting view into the minds of the “LGBT community.” The things that these “adults” write are not only hateful but unbelievably sickening, graphic, profane, and disgusting. No normal people would think that way, much less post it on a public forum.

Here are a few that are less profane: 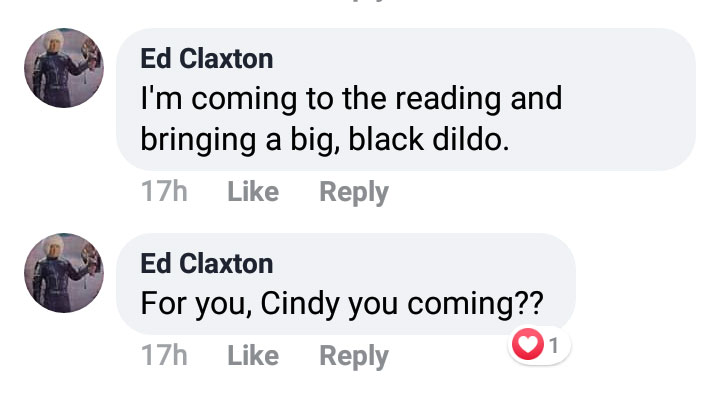 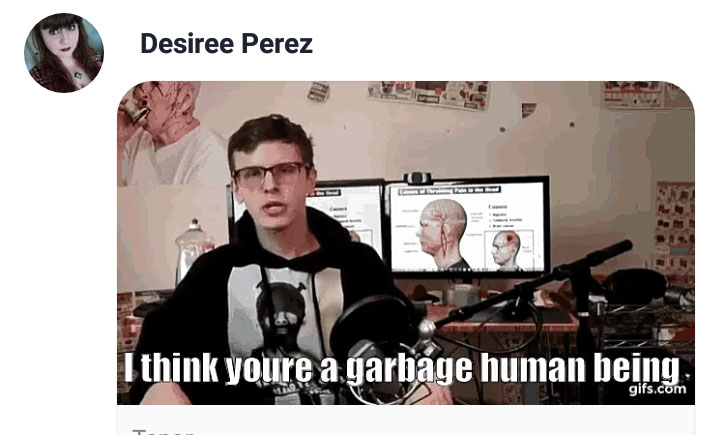 But as so many other pro-family people who have experienced the same thing will tell you, that is par for the course for “LGBT” activists. No matter how heated the discourse may get, no other group reacts that way.

The good thing is that this time, LOTS of people came to Cindy’s defense on social media, and confronted the thugs. And like most classic bullies, they are very mean when they think people are afraid of them, but tend to wilt when people fight back.

This was a great victory by a stalwart pro-family bunch against a big enemy. And, no, the DQSH hasn’t come back to the Morgantown library since then!