Used around the world for hard-to-find accurate information.

Wait till you see what Amazon does NOT consider offensive!

You can take action! See below. 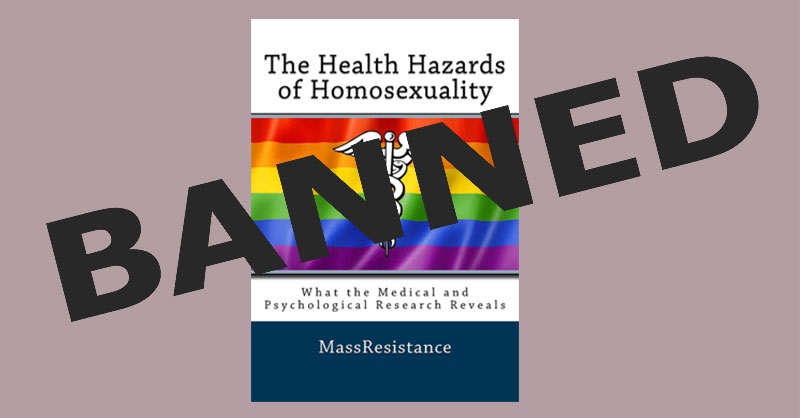 The book-burning culture of the Left is continuing its march.

As everyone knows, Amazon has achieved a virtual monopoly on the book industry. It has vast powers to decide what books people can read – and what they can’t read.

After 3½  years of publishing our groundbreaking 600-page book, The Health Hazards of Homosexuality: What the Medical and Psychological Research Reveals, Amazon has suddenly notified us that it has banned it from being printed or sold on its site. Amazon is also refusing to allow us to print any more copies for our own use and has even blocked us from accessing our account records. The book was printed (and also posted as an eBook) through Amazon’s Kindle Direct Publishing subsidiary.

Why this book is important

The mainstreaming and normalization of homosexuality has created a public health crisis affecting us all. This book documents in detail the enormous public health problems – both medical and psychological – associated with homosexual behavior.

The book took several years to compile. It brought together information from the federal Centers for Disease Control, major medical professional groups, and other mainstream medical sources, as well as LGBT medical and advocacy groups – all documented in 1,800 endnotes with up-to-date links. In today’s society, this is critical information everyone should know, especially given what’s being pushed on young children in schools across the country. Read more about it here, including reviews and excerpts from the book.

Although the scourge of political correctness has taken over much of the medical establishment, the book has gotten rave reviews from the conservative medical community. Some of those include:

Michelle A. Cretella, MD, Executive Director of the American College of Pediatricians, called the book a "tour de force" and added: “This book is the single most comprehensive collection of scientific data from authoritative scientific sources on this topic. Our youth have the distinction of being among the most lied-to generation. For this reason alone, this book should be required reading for all health professionals, educators, legislators, graduate students, and parents."

Paul A. Church, MD, urologist, former Assistant Clinical Professor of Surgery at Harvard Medical School: “It is an excellent go-to reference for those seeking accurate, truthful information on the health risks of certain sexual behaviors. I recommend this book highly." 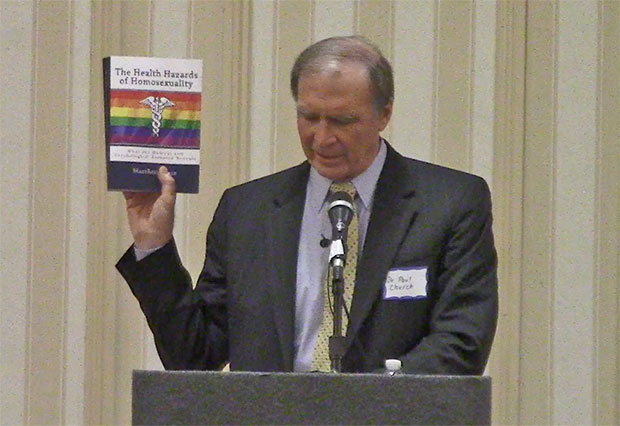 Dr. Paul Church holds up a copy of the book.

A prominent cardiologist: “I think this book should be on the shelves of medical school bookstores as it is one of the most comprehensive tomes on the subject that I have seen.”

Of course, the national LGBT movement and their allies in the media despise this book – though they have never been able to claim that the information is incorrect.

In 2017, when we sold the book at our table at the Family Research Council’s national Values Voter Summit in Washington, DC (where President Trump spoke), the liberal mainstream media went ballistic. NBC News linked the book to Trump. USA Today, Yahoo News, and the Huffington Post fumed about it. In the UK, The Independent and The Guardian newspapers covered our book’s appearance! But at the Values Voter event itself, the book was a big hit! 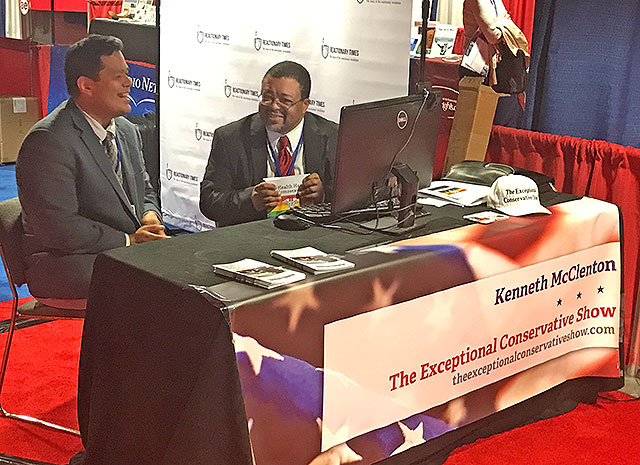 The Health Hazards of Homosexuality got the attention of conservative media at the Values Voter Summit. Above, Dr. Robert Oscar Lopez (left) is being interviewed by radio host Kenneth McClenton who is holding the book. 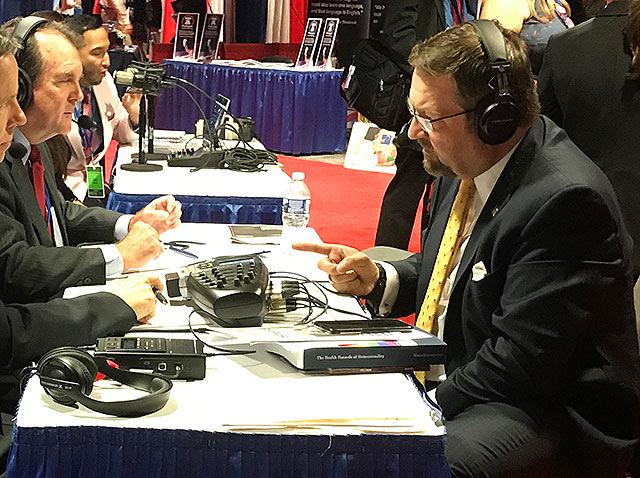 Former presidential advisor Dr. Sebastian Gorka has his copy of "The Health Hazards of Homosexuality" with him as he does a radio interview at the Values Voter Summit. 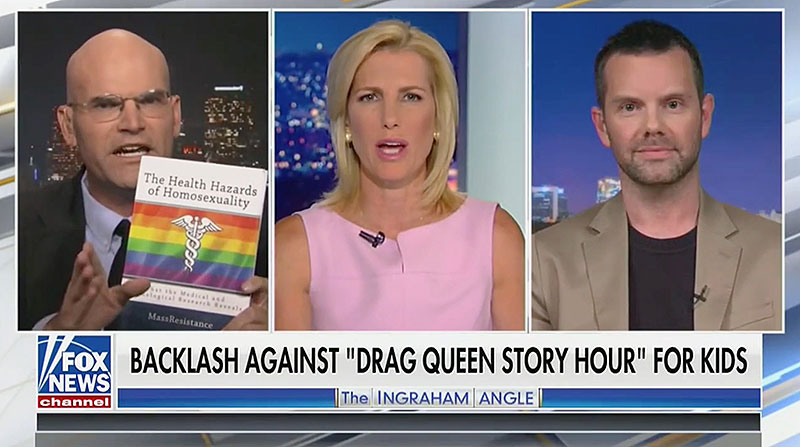 Last year the book even made an appearance on Laura Ingraham's show on the Fox News channel!

Suddenly Amazon claims the book is “against our content guidelines”

Putting together and marketing a 600-page book with 1,800 footnotes on Amazon was not easy. In 2017, we worked with the Amazon staff that helped independent publishers (then named “Create Space”). For over three years they unquestionably knew what the book was about and what it contained. They had no problem with its content – until a month ago.

Then suddenly the book disappeared from the Amazon site. On July 17, we were notified that they have determined that the book violates their “content guidelines” and they have thus taken it down completely. They closed our account and will not allow us to open another account.

We wrote them back asking specifically what “content guidelines” the book violates, since it is a compilation of medical information from mainstream sources. They answered us that the book contains “content that is considered offensive.” That’s all there was to their answer!

Here’s what Amazon does NOT consider “offensive”

Thus, Amazon has determined that a book documenting the health hazards of homosexual behavior is “offensive” and must not be allowed to be published. But in fact, Amazon is a cesspool of pornography and perversion.

Here are just a few of the books that Amazon does NOT consider to be offensive – and are sold on the Amazon site:

Pornography and “how to” for teenagers:
Teen Gay Sex: Getting Fucked by Farm worker
Teen gay love: A Sex Series with Cousin Brother
Queer: The Ultimate LGBT Guide for Teens
Rainbow Boys

Take Action: Fight back against Amazon’s ban of The Health Hazards of Homosexuality

Since Amazon is a virtual monopoly of the book business, they have the unprecedented power to remove any book they disagree with politically from the public forum of ideas. And Amazon has decided to silence the information in our book.

You can take action with these four steps:

The public needs to know the truth about these unhealthy and destructive behaviors. Don’t let Amazon silence it! 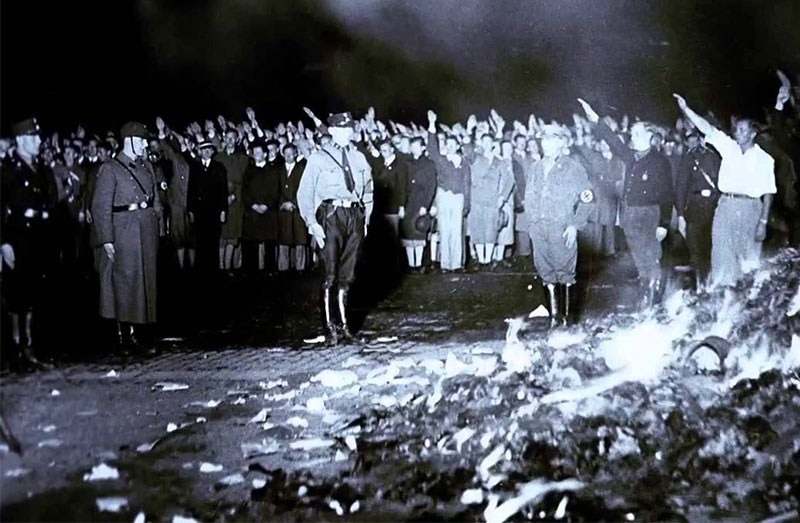 Are these chilling book burnings from 1930s Germany already starting to happen in America?