When MassResistance came with equal numbers to counter-protest, they didn’t know what hit them! 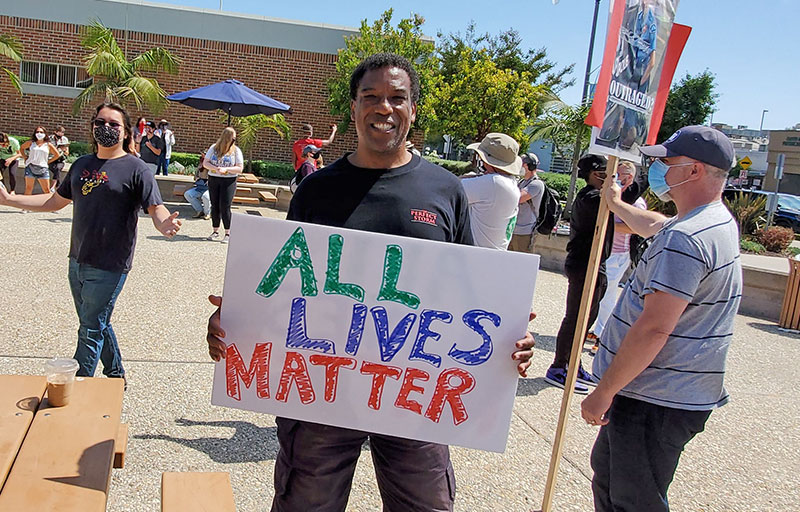 Black Lives Matter has been terrorizing cities across America with their menacing “protests” (many of which have become violent), their irrational political demands, and their intimidation of public officials. They call for de-funding or drastically weakening the local police force, changing the names of local landmarks, removing statues, and various radical changes to local government.

Conservative groups often respond simply by holding separate “pro-police” rallies, which have little effect. But our side never comes in equal numbers to directly confront the Black Lives Matter goons and radicals. Now, MassResistance is changing that.

El Segundo, California is a community of about 16,000 situated next to the Pacific Ocean, just south of the Los Angeles International Airport. It’s been nicknamed “Mayberry by the Sea” for its cozy small-town atmosphere. But the city has recently seen a number of left-wing movements coming in to disrupt the peace and tranquility of the town.

On June 25, a local MassResistance activist contacted us. He and others were very upset that Black Lives Matter (BLM) had announced that they’d formed a chapter in El Segundo and were planning a protest and demonstration outside City Hall on June 27 – two days away. BLM also announced they were going to present a list of demands on the city police department, the city government, and the local schools.

We decided that this needed to be confronted. Conservatives have been sitting on the sideline for too long. Our national organization director, Arthur Schaper (who’s based in the Los Angeles area) got right to work. He rallied MassResistance activists in El Segundo and the surrounding area. 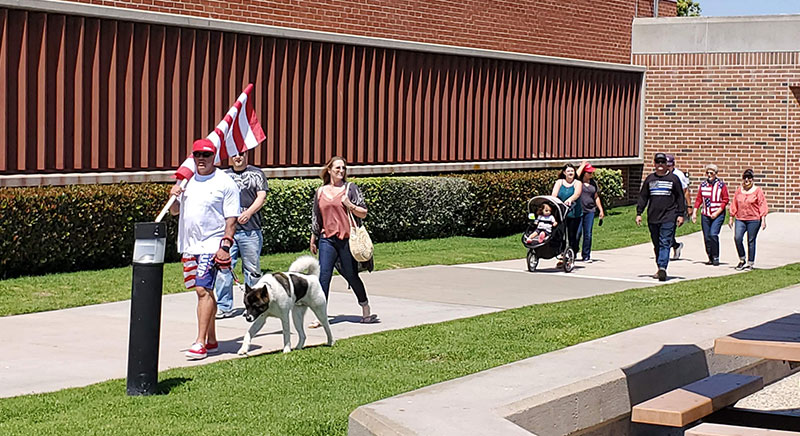 Our side got there early and outnumbered them at first, until they caught up and evened up the numbers.

And what a counter-protest it was! As the local newspaper reported, MassResistance activists came and took over!

Shortly before the planned start time, there were more demonstrators in the plaza who were opposed to the cause — some holding “All Lives Matter” signs — than there were protesters in support of the Black Lives Matter movement. That changed as the demonstration got in full swing, eventually attracting about 50 people to each side … The original demonstration carried on, even as counter-protesters shouted over the speakers.

No BLM event had ever experienced that! 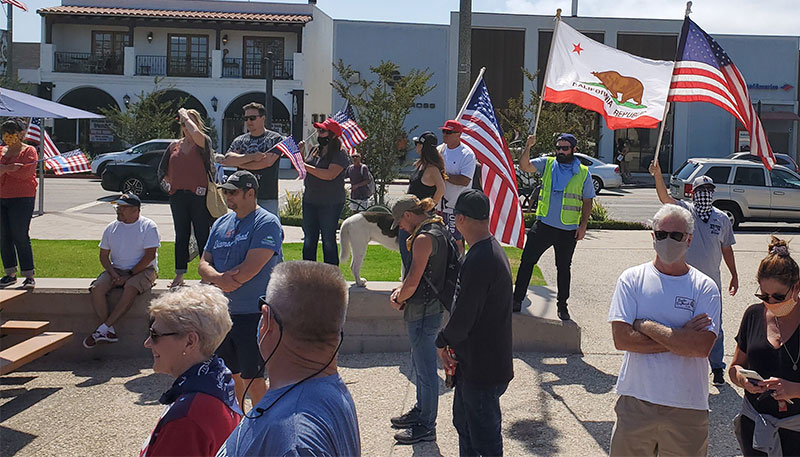 Thanks to our crowd, there were more American flags than anything else! 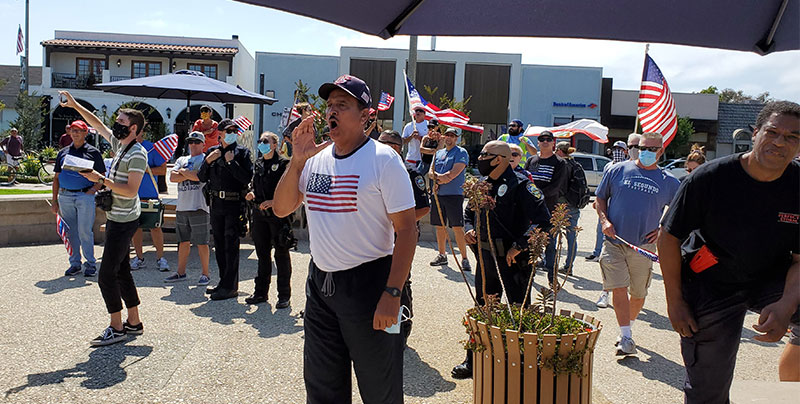 And we were not afraid to be very vocal! It completely rattled the BLM crowd.

In their faces: Someone from our group brought a "Trump 2020" truck that was parked right where the demonstration was taking place!

These “social justice warriors” are used to bullying everyone else and drowning out any other voices. But this time they were the ones often being drowned out by our people shouting and chanting “All Lives Matter,” “Blue Lives Matter,” and epithets about the corrupt, destructive, and un-American nature of their organization. 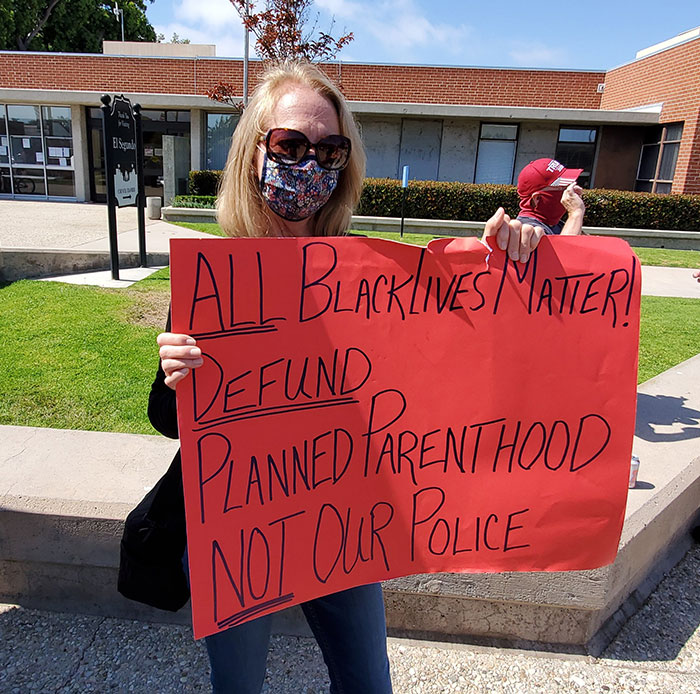 This really seemed to steam them, for some reason. One BLM activist came up and angrily told her that no black babies are being aborted by Planned Parenthood - and tried to grab the sign! 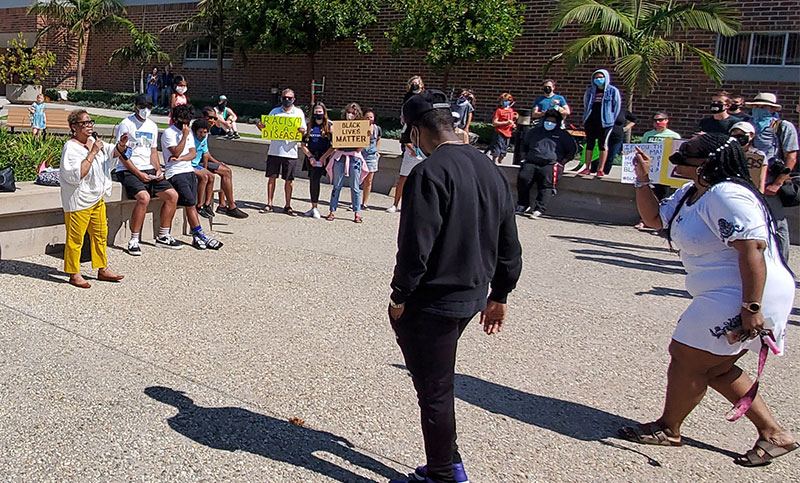 At one point one of our people (right, in white dress) had heard enough nonsense from the BLM speaker (left, in yellow pants). She came up and screamed at her, "Why don't you care about the black lives that are being killed in Chicago by other blacks?" Of course, she got no answer.

The BLM event was clearly very well organized. But when confronted by MassResistance, it became clear that their unity of purpose is mostly a façade. Arthur and others walked up and challenged a number of them about the actual goals and objectives of Black Lives Matter (as described on its website and elsewhere) and even the meaning of signs they were holding. Most of the BLM people were clueless about their own organization’s ideas, and could barely explain why they were there. When they realized they were cornered, they would start to babble hackneyed political nonsense. A few just got angry. When Arthur pressed the two leaders of the protest to admit on video that they want to defund the town’s police, they denied it. 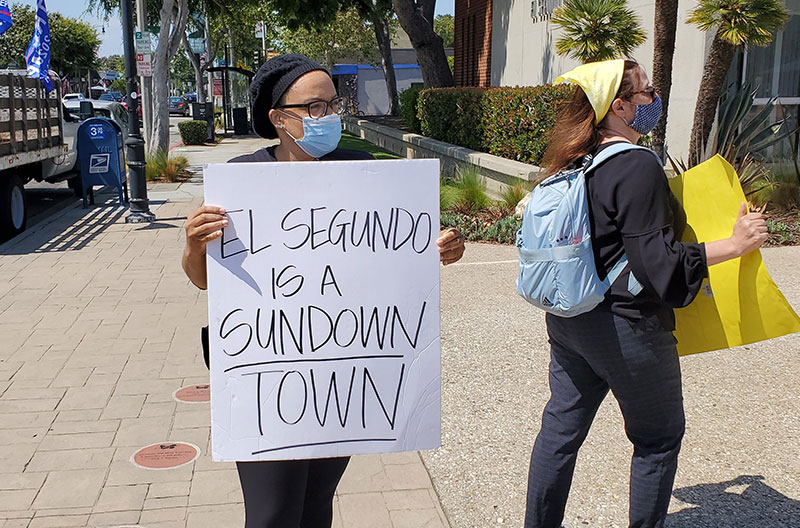 When Arthur asked this lady to tell him what a "sundown town" is, she didn't know. She stammered that she was holding the sign for someone else. Par for the course with these dimwitted "social justice warriors." [NOTE: Urban Dictionary says "sundown town" is "a small town (mainly in the South) where black people are beaten and sometimes kidnapped after the sun goes down." Not a fit description for El Segundo!]

Most of the Black Lives Matter demonstrators there were not black, but white liberals. (It seemed like there were more blacks and Hispanics among the MassResistance group.) 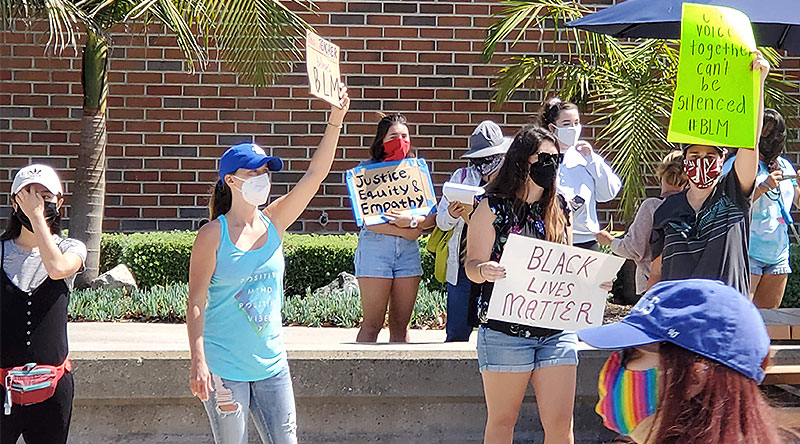 When you looked through the Black Lives Matter demonstrators (above and below) just about everyone was white. Apparently the blacks in town had better things to do that day. 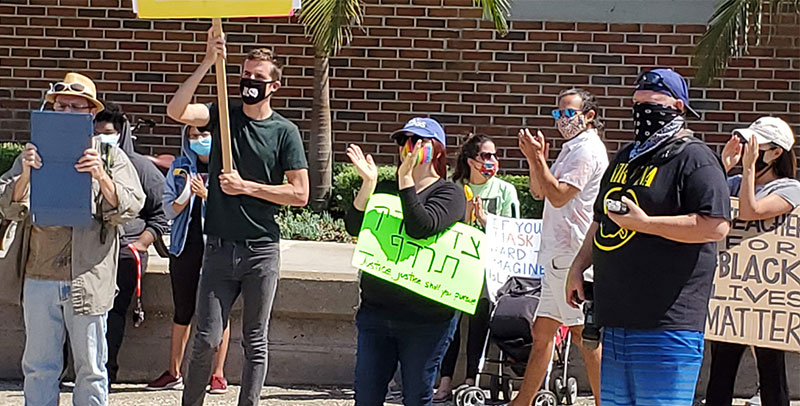 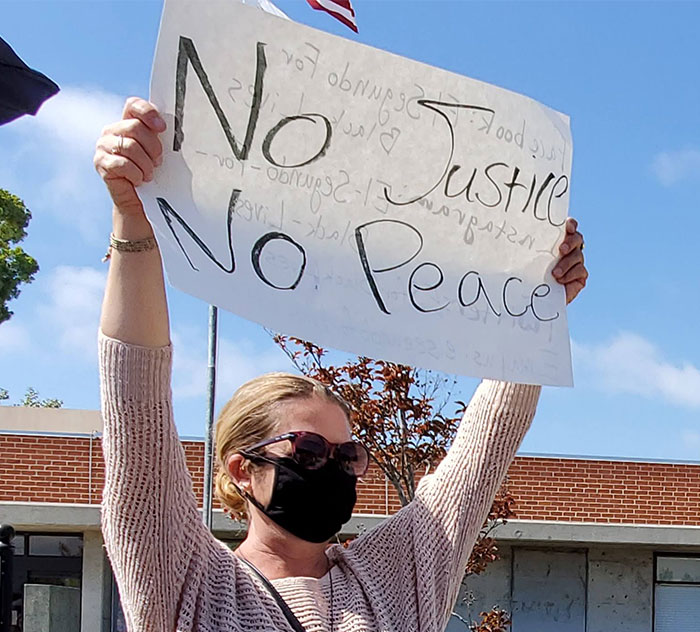 They use these signs to intimidate the local residents. But it wasn't working very well this time!

As we have warned, Black Lives Matter is also devoted to pushing the LGBT agenda. It was certainly part of this event. It’s interwoven into their ideology, along with Marxism, anti-Semitism, and their own brand of racial bigotry. 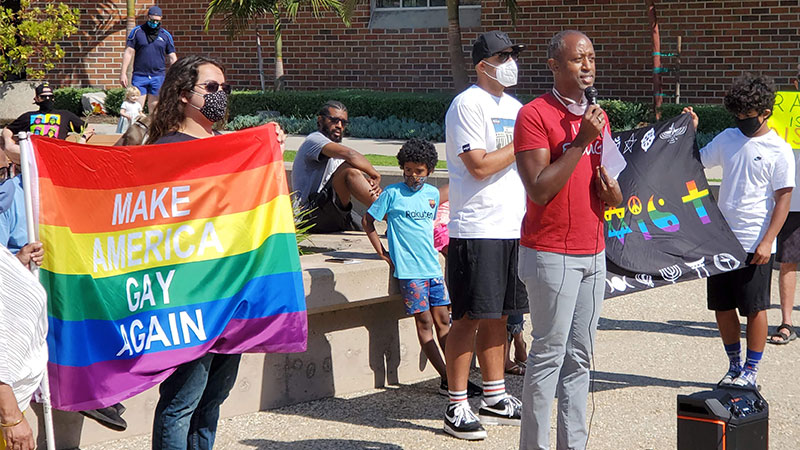 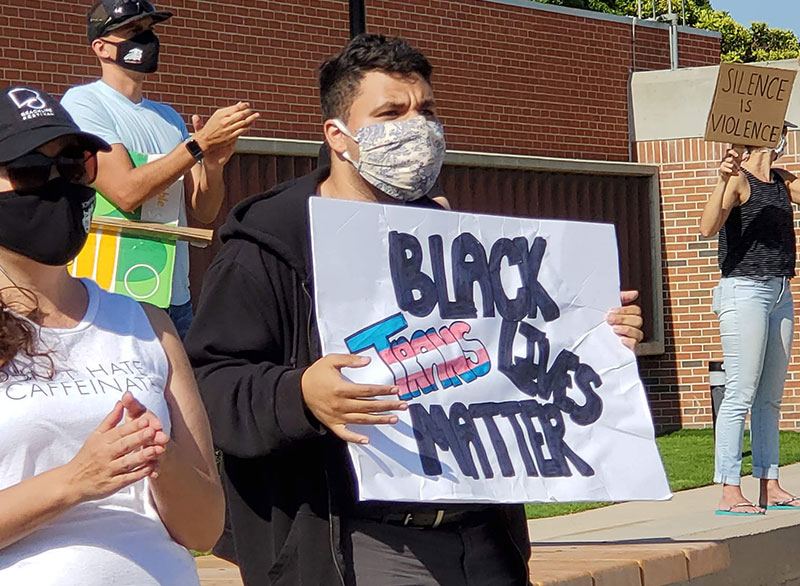 A continuing outrage across the country has been that police departments allow the BLM “protesters” to show up (without a required permit) and do whatever they want, when it’s obvious that anyone else would be treated vastly differently for doing the same things.

Arthur approached the police lieutenant watching the event and confronted him about that. As you can see in our video below, the lieutenant admitted that people normally need a permit to take over the plaza with loudspeakers. He fumbled around when Arthur pressed him to explain why BLM got special treatment. It was shameful - and infuriating. 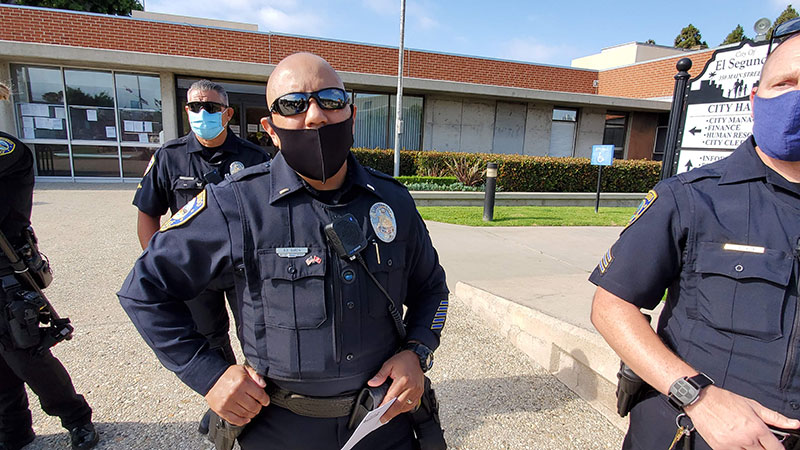 The El Segundo police lieutenant that Arthur confronted gave a pretty disgraceful answer as to why the the Marxist, thuggist BLM group's demonstration doesn't have to abide by the laws that everyone else does. It's pretty frightening to think about. But at least this time someone's standing up to it!

Here’s what you haven’t seen yet anywhere else in America when Black Lives Matter comes into a town to intimidate everyone.

List of BLM demands to the town of El Segundo:

Here is the list of demands that they presented that day to the El Segundo officials. It’s basically a neo-Marxist “social justice” manifesto disconnected from reality, reminiscent of something out of the Chinese Communist Cultural Revolution. For example, it says El Segundo must “acknowledge and apologize” for a contrived “racist legacy” and hire schoolteachers on the basis of race, not qualifications. And of course, it includes a new wave of mandatory propaganda for the local schools on “race and diversity.”

Unfortunately, as in so many locales across the country, the city officials are already starting to grovel and cave in. Their statement, included in the newspaper article, talks about giving BLM “a seat at the table to work collaboratively toward meaningful outcomes.”

But we had our own statement published in the same article:

“It’s a cultural revolution that wants to rewrite our country’s history,” he said. “America is one of the least racist countries there is.”

Bold truth is especially important at this time.

After this was over, MassResistance was thanked profusely by many El Segundo residents. They realize that it’s very important that good people stand up to this madness. When no one speaks out or confronts an evil cause, it gets more momentum and strength. And when even a few people stand up and fight back, others who were previously timid get a dose of courage and join in.

This needs to be happening everywhere! You will definitely be seeing more of this from MassResistance!