A mother reacts after seeing her son’s Zoom class.

Coming to a school near you?

Part 1 of a series on BLM in your schools 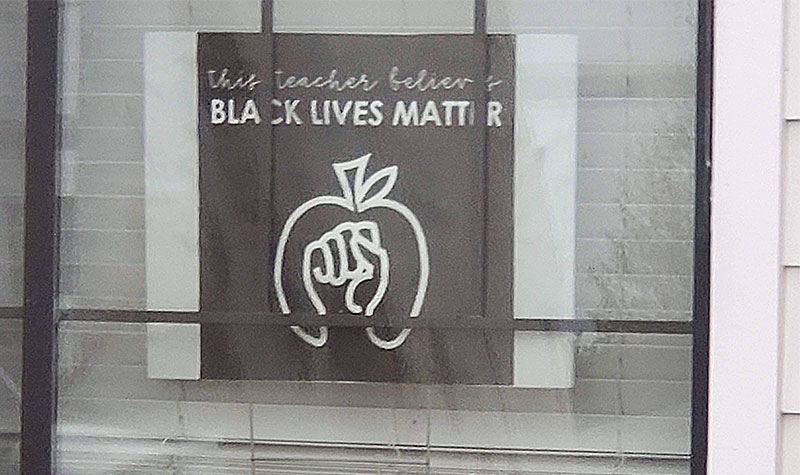 Indoctrination. Sign in a window of a house a few blocks from the high school announces to the neighborhood: "This teacher believes BLACK LIVES MATTER."

It’s been happening faster than anyone could have predicted. When the new school year began several weeks ago, most parents were completely unaware that Black Lives Matter had already been using their enormous resources and influence to bring their radical Marxist and racist agenda into public schools across the country. Similar to the LGBT movement, their goal is to re-mold the minds of a generation of children.

Because schools have been pushing other anti-American and anti-family ideas for years they were primed to bring this in at record speed.

But luckily, the COVID restrictions mandating Zoom classes at home have made it easier for parents to see for themselves what’s really being taught to their children.

Earlier this month a mother in Torrance, California (a suburb of Los Angeles) happened to be monitoring her son’s high school English class, taking place via Zoom.

What she saw and heard was shocking. The English teacher was asking her son and others in the class to respond to a series of questions and statements from an inflammatory and offensive article on race in America.

Among the article’s messages:

Blacks are routinely killed by white police. White people think all blacks are criminals. Republicans are trying to keep blacks from voting. President Trump wants protesters to be shot. Burning buildings and looting is simply the last resort for blacks to deal with the “institutional racism” and the killing of blacks by police. Because of all this, the article says “it feels like hunting season is open on blacks.”

You can read the entire article here. It was originally written as an op-ed in the Los Angeles Times by Kareem Abdul-Jabbar, the former professional basketball player, who has been known for decades to harbor anger towards white people.

The mother was livid. Is this what teenagers should be taught in English class? She called MassResistance and spoke with Arthur Schaper. By coincidence, Arthur lives in Torrance just blocks from the school, West High School. 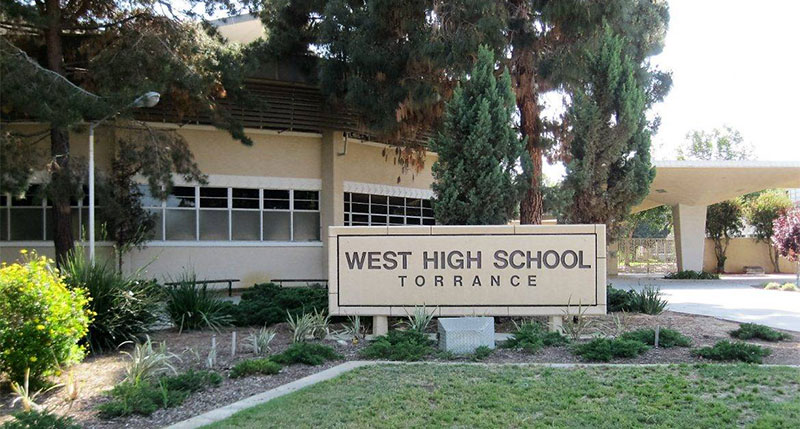 Arthur and other activists in Torrance got right to work. To get a sense of how pervasive this BLM agenda is in the local schools, they contacted one of the Torrance City Council members. He said that it is definitely happening in Torrance, but parents are fearful to oppose it. He told them:

Speaking out and exposing this needs to come directly from the students and their parents. I've been contacted by a couple dozen parents with this same concern, but virtually all of them have clearly stated that they are afraid to come forward for the fear of repercussion from the teachers and staff.  I also know a few families that have even taken their kids out of the Torrance Public Schools.

Arthur talked at length with the mother. She agreed that for the sake of her son and the others she needed to stand up to this. Knowing that MassResistance had her back, she was willing to move forward.

The mother sent an email to the principal. When she didn’t hear back, she sent the same email to the entire Torrance School Board:

Last week my son had to respond to the attached questions. These are not issues that should be discussed in ENGLISH, and the way these questions and statements are written, I cannot think of a class where they should be taught at all. These questions and situations are based only on feeling, not fact. In fact, the people involved in these cases have not even had a trial. What are we trying to teach our children? In America, you are innocent until proven guilty and every week it seems like there is more and more information that comes out regarding these cases. I need to know if this material is approved by West High and by the district. I am very disappointed that this district is trying to indoctrinate our children … This teacher is teaching propaganda. I will not stand for it and I am not the only parent that will not allow their children to be indoctrinated. Would you?

I would like to hear from you as soon as you are able to review and discuss this. I am not sure why grown adults would want to do this to children.

She then contacted the teacher specifically asking for a meeting to discuss this. Arthur also emailed the teacher demanding an explanation for the purpose of the assignment.

A few days later came their answer: No more BLM in class!

At first, the only response was an email Arthur received from a school district administrator with a copy of the district’s “complaint procedure” (i.e., start with the teacher and principal, and then go up the ladder). But besides that, just silence.

This week we got an email from the mother. The school has backed down!

The English teacher and I spoke on Friday. He and the vice principal were on the phone. In summary, they confirmed Torrance schools will not be implementing the “critical race theory” curriculum or Black Lives Matter. He said he would make sure to provide both sides of anything political they do.

I am continually monitoring my son’s classwork. I have not seen anything yet. He did say the document was approved by the district. No surprise there. At this point I am just going to continue to monitor and will raise hell when needed. Hoping they are being truthful – we will see.

This needs to happen all over America!

First and foremost, MassResistance believes that it’s absolutely necessary to confront this propaganda directly and strongly! School officials are not well prepared for that. The school expects parents, students, and others will be too frightened and intimidated to speak up.

MassResistance will continue to press on the Torrance school officials until we get more answers – and make sure it’s being removed completely!

Unfortunately, this is just the tip of the iceberg compared to what we’re finding across the country. Black Lives Matter is using their enormous funding and resources to poison school curricula in a way we’ve rarely seen before. We will be exposing that in upcoming articles – and helping you confront it!