Signed by Governor over objections of many Democrats

MassResistance fought hard to stop it

Analysis: Result of long-term capitulation on the issue by pro-family movement 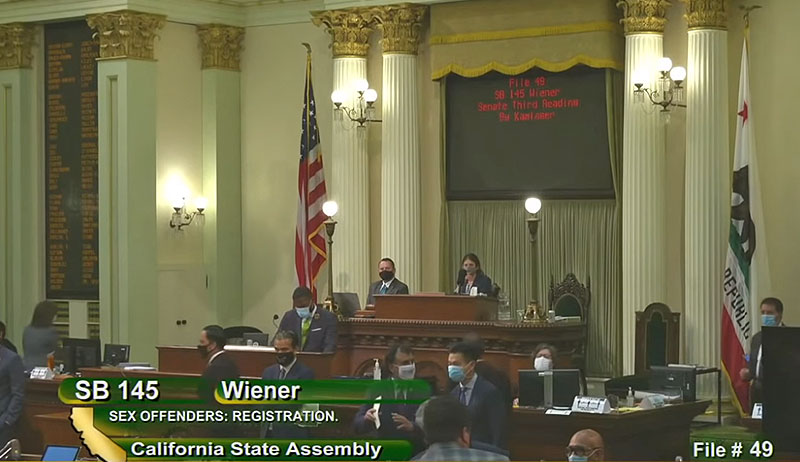 The California Assembly (all wearing masks) suddenly takes up SB145 on August 31 - the very last day of the legislative session.

A huge problem in society is teenage boys (and also girls) being seduced and lured into homosexuality by “gay” older youth and adults. Many anguished parents have shared their heart-breaking stories of that with us. The “chicken hawk” – a homosexual man who seduces boys – is part of the homosexual vocabulary. As far back as 1972, the homosexual movement called for the repeal of age of [sexual] consent laws.

As we reported last June, there was a frightening LGBT bill in the California Legislature, SB 145, that would remove the mandatory “sex offender” label for adult-child homosexual sex. The bill was filed in Jan. 2019 by Sen. Scott Wiener (D-San Francisco), who is openly “gay” and has been an aggressive LGBT advocate in the legislature. 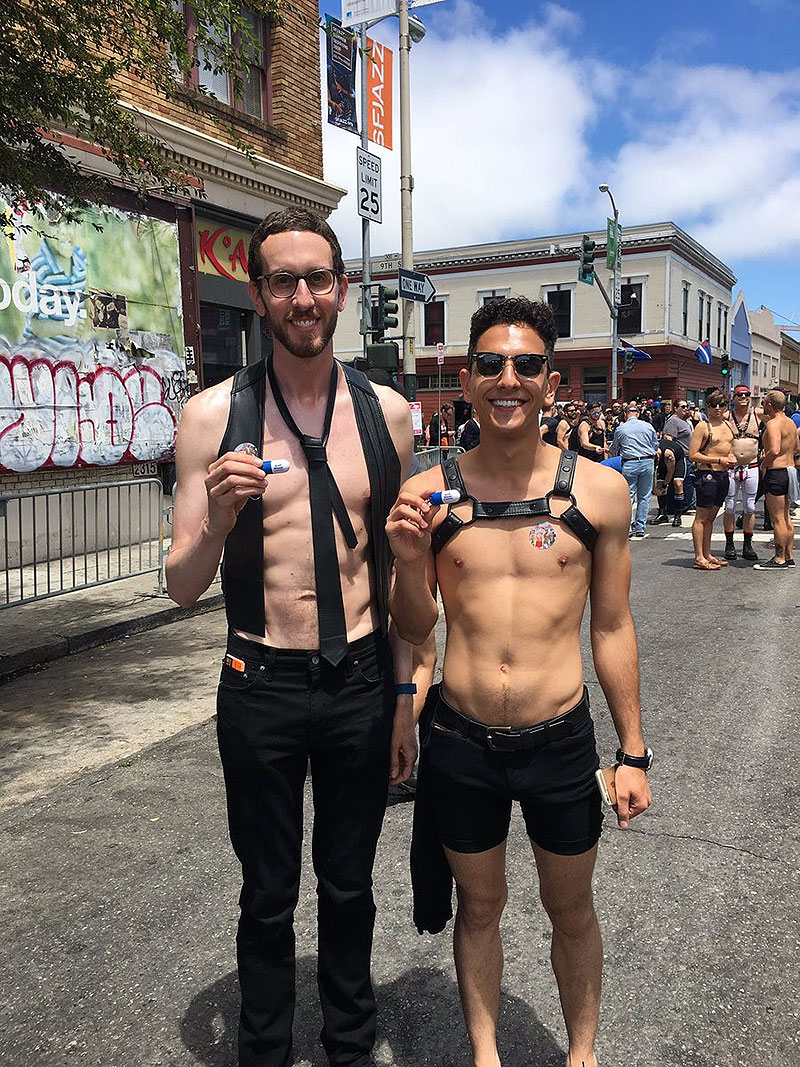 At the time of our previous report the bill had been stalled in the Assembly’s Appropriations Committee for over a year by the Committee’s chairman, Lorena Gonzalez (D-Chula Vista). It was assumed to be effectively killed, though MassResistance continued to organize Gonzalez’s local constituents to push her to keep it blocked.

But suddenly everything changed. On Aug. 20, 2020, the Appropriations Committee voted to approve SB 145 and move it forward. On Aug 31, the very last day of 2020 legislative session, both houses of the California legislature voted to pass it. On Sept. 11 it was signed into law by the Governor. (One pleasant surprise: Every Republican voted against it.)

During that time, MassResistance worked around the clock to stop the bill, marshalling citizens across the state to pressure their legislators. Some got meetings with staffers. Some MassResistance activists confronted legislators at town halls and other public events. After the bill passed the legislature, we worked with some Democrat legislators who opposed the bill to attempt to persuade the Governor to veto it. But the sudden momentum was too great, even though several left-wing Democrats besides Gonzalez were against the bill.

How did this happen? The bill had languished and seemed dead to most people who follow those things in California, then at the last minute took off like a rocket. Here are the two things that we noticed:

Assembly member. Lorena Gonzales, chairman of the Assembly Appropriations Committee, had sat on the bill for over a year.  Then on Aug. 20, 2020, she brought it up for a vote – likely under pressure from the leadership.

As the Bill 145 vote-tally page shows, it passed the Appropriations Committee by 10 to 6 with 2 abstentions. Since abstentions are considered “No” votes under California legislative rules, it was effectively a 10-8 vote.

But if you look carefully, three of the committee members who voted “Yes” to pass SB 145 out of Committee (Calderon, Eggman, and Eduardo Garcia) later voted “No” or abstained (both effectively a “No” vote) when it got to the Assembly floor for the final vote! Had those three voted the same way in the committee as they did on the Assembly floor, the bill would have died in committee.

Why did they do that? That way they could please their left-wing party bosses and the LGBT lobby by getting it out of committee, and they could still tell their constituents that they opposed it when the Assembly voted! (The leadership knew they had the votes to spare in the full Assembly.)

It’s a very corrupt process, one which allows lawmakers to make it seem as though they showed courage and integrity in voting against their party, when in fact they were going along with their policy agenda the whole time. We’ve contacted their offices for an “explanation,” but the three Assembly members and their staffs refuse to comment on it. 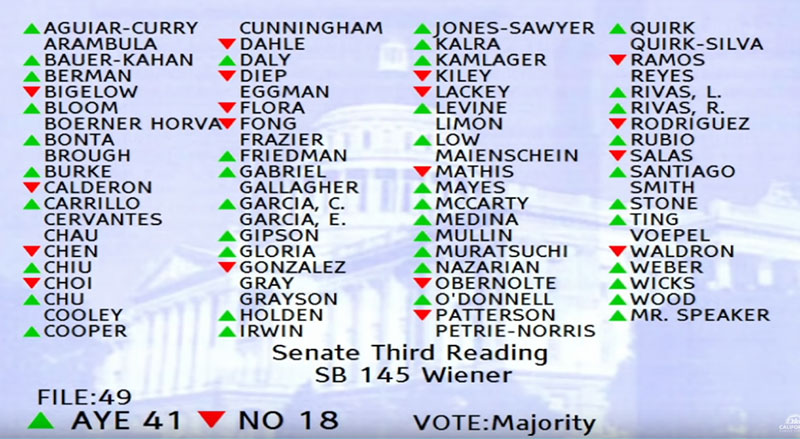 The final Assembly vote was 41-18, with the rest of the 80-member body abstaining. But the margin is misleading. As soon as the leadership knew they had a majority, they allowed the other Democrats to vote any way they pleased, or abstain.

The rallying cry of the LGBT lobby was that bill SB 145 was simply to bring about equality – treating everyone the same.

Since 1944 in California, if an adult (age 18 or over) had heterosexual relations (i.e., vaginal sex) with a teenager (age 14-17) and the age difference between them is less than 10 years, then the adult has not been required to register as a sex offender – it was up to the judge’s discretion. But if the adult had homosexual relations (i.e., sodomy, oral sex) with a teenager, then he was required to be registered as a sex offender – the judge had no discretion.

SB 145 removed the requirement of being a registered sex offender if the adult had homosexual relations with the minor, and gave the judge the same discretion as with heterosexual sex.

The LGBT activists and the Democrat leadership argued that the previous difference in punishment was unfair, unequal, and discriminatory. This bill just made it the same for both. It was a powerful argument. Who could be against equality?

But in fact, it was unequal for a good reason. The law rightfully recognized the depraved and destructive character of homosexual sex (both physical and mental) and how it affects a child much more profoundly. When that original law was passed (in 1944) the legislature understood that very well.

But in 2020 virtually nobody (except MassResistance!) was willing to say that. They were afraid the Left might call them “homophobic.” So as a result, the arguments that were used against the bill were logically pretty weak.

Much of the time, the opposition to SB 145 seemed completely disjointed. Lorena Gonzalez – a liberal, progressive Democrat – spoke passionately against the bill during the Assembly debate. She started off by saying that she supported LGBT “equality” which this bill would provide. But then, speaking as the mother of a 14-year-old, she said she was very uncomfortable with adults having sex with young teenagers, and therefore was voting against it. It begs the question: If she’s so worried about children being exploited, why didn’t she file a different bill that made heterosexual sex with minors a mandatory sex offender listing? Her speech (and the similar speeches by other opponents) didn’t do much to dissuade any of the bill’s supporters. 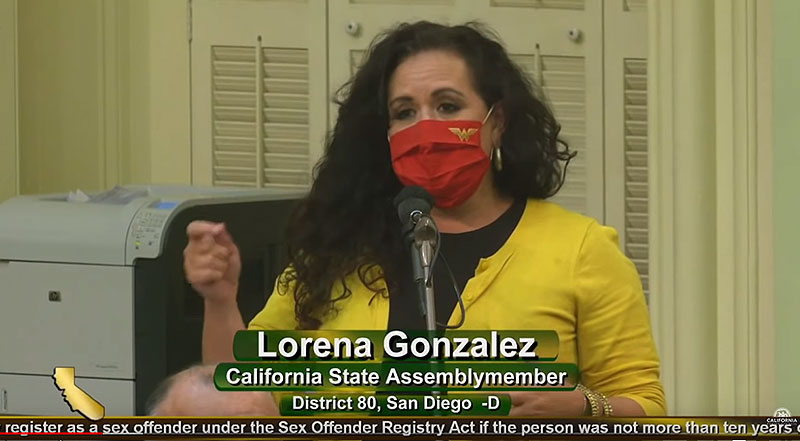 During the debate on SB 145, Assembly member Lorena Gonzalez speaks against the bill.

The larger failure of the pro-family movement

If conservatives aren’t willing to speak out on this issue, we certainly can’t expect liberals to do so!

Let’s be honest. This is the result of a fear among pro-family people of opposing the concept of LGBT “equality” with heterosexuality and telling the truth about perverted behaviors. It has been predominant in mainstream conservative circles for many years.

We could tell story after story of pro-family activists around the country who will fight the “hetero” portion of Comprehensive Sex-Ed and other horrible programs in their schools, but won’t oppose (at least publicly) the “homo” part of it. They will even make it a point to say “No, we’re not ‘anti-gay.’ We’re just against ‘inappropriate’ sex-ed material.” It’s one of the reasons our side loses that battle so frequently. They’re selling out children’s well-being for their own political cover.

Of course, a huge part of the problem is that a frightening number of so-called pro-family conservatives (most of whom claim to be religious) actively accept the absurd LGBT “born that way” argument. As a result, they may be uncomfortable with the latest transgender madness, but they aren’t really opposed to the homosexual agenda targeting children.

In many ways, as we’ve discussed above, the mushy pro-family movement has become a major impediment to fighting and stopping this hideous agenda. This is not just in fighting the exploitation of children, but also the “gay marriage” issue, oppressive LGBT non-discrimination laws, transgender public restrooms, etc.

Too many pro-family groups avoided labeling SB 145 as what it apparently really was: a way to make it easier for homosexual adults to prey on vulnerable teenagers. This is what the LGBT movement has sought for decades – and has incrementally worked towards.

Most pro-family groups also misjudged the power of LGBT militancy in the California legislature. They did not believe that such a horrible bill would actually make it to the Governor’s desk – and be signed into law. So they didn’t put in the hard day-to-day lobbying work against it.

Too many family groups focus on creating relationships and persuading lawmakers and LGBT groups to stop pressing forward with the LGBT agenda, rather than confronting them outright that everything about the LGBT movement and its ideas are wrong. They are only focused on the policies that are pushing more offensive intrusions against children. They have all but given up on stopping the LGBT onslaught at its core. They still do not understand that there is no room for compromise or dialogue with LGBT activists and their supporters, whether in the major parties or interest groups around the country. Still, many pro-family lobbying groups think they can work out compromises to slow the spread of this dangerous agenda, when they should be working towards undermining the agenda completely.

Politicians need to be made to feel ashamed of supporting this horrible agenda, not celebrated for it. MassResistance will keep up this fight!