Rev. Lou Sheldon, a giant force in the early pro-family movement, passes away. 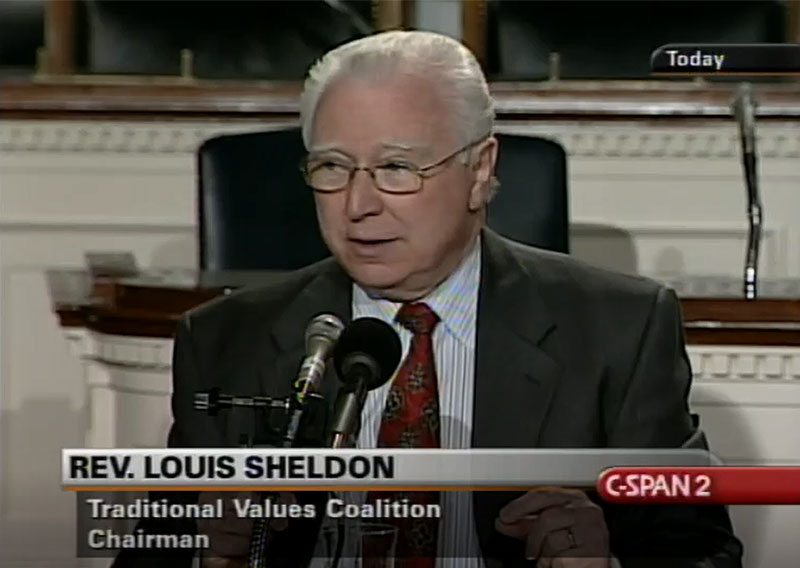 Taking them on: Rev. Lou Sheldon on CSPAN debating athiest activists on "Separation of Church and State" in Washington, DC in 2003.

Rev. Lou Sheldon, the nation’s top figure opposing the LGBT movement for nearly 40 years beginning in the 1970s – and a great friend of MassResistance – passed away on May 29 from a longstanding illness. He was 85. He provided the muscle for the pro-family movement in the U.S.

Rev. Sheldon understood the sweeping dangers of the homosexual movement at a time when few took it seriously. He fearlessly sounded the alarm and successfully opposed their early efforts to change the culture through legislation and other means. He was never afraid to tell the truth. He had tremendous energy and drive – and made things happen.

His organization, Traditional Values Coalition, was the  best known national pro-family grassroots organization in the 1980s and 1990s. He brought together an active alliance of churches. Sheldon was also an outstanding and tireless political advocate for the pro-family cause. He worked closely with Newt Gingrich, William Bennett, Trent Lott, William Dannemeyer, Pat Robertson, Jerry Falwell, and many other key political figures.

Many have said that America’s political landscape would have been much different if not for Sheldon’s efforts. He stood out against the moderate nature of the pro-family establishment. Even now, whatever “guts” this movement has can be credited to him.

Louis Philip Sheldon was born in Washington, DC in 1934. He was a track and football standout at Roosevelt High School, where he ran the 100 yard dash in 10.0 seconds – one of the fastest schoolboys on the East Coast.

He met his wife, Beverly, at Michigan State University where he went on a football scholarship. But when he saw that only about 15% of the team graduated, he quit the team to concentrate on his studies and took various jobs to support himself. He graduated in 1957 with a degree in history. He then studied at Princeton Theological Seminary in New Jersey, where he graduated in 1960. At the seminary, he led the fight against the growing liberal faction which he called the ”Princeton cemetery” during his graduation speech.

After graduation, he pastored in two churches in North Dakota. In 1965 he moved to Milford, Delaware, where he pastored the largest church in town. When he got there, the public schools were racially segregated. He was instrumental in forcing integration of the town’s schools – against the wishes of many political leaders.

In 1969 Sheldon moved to Orange County, California. He pastored a local church and became an incredible statewide organizer, coordinating pro-family political advocacy by hundreds of California churches. They fought California’s repeal of the anti-sodomy laws and other early pro-LGBT legislation. It was permitted in the 1970s for anybody to go on the floor of the State Legislature and speak, and Rev. Sheldon spent much time in the state capital, Sacramento, making the pro-family voice heard. And he traveled the country extensively to spread the word.

During Jimmy Carter’s 1976 Presidential campaign, Rev. Sheldon was introduced to Carter on several occasions. They quickly became close friends, and the two of them would have regular Bible studies over the phone. Carter told Sheldon that he would appoint pro-life Christians to a list of key administration positions (a list known as the “Plum Book”). But as the election drew near, Carter called him and reneged on that promise – likely under pressure from liberals in the party (led by Walter Mondale). As a result, Sheldon withdrew all support for Carter and voted for Gerald Ford.

In 1976, when Pat Robertson was starting CBN University (later renamed Regent University), his first hire was Sheldon as its Provost. In that role, he hired all the initial staff, built up the library, and prepared it for accreditation. The following year when that work was largely done, he returned to California.

In 1980, following Ronald Regan’s election as President, Rev. Sheldon formed Traditional Values Coalition (TVC), based in Anaheim, CA. It quickly became a major national pro-family force, largely due to Sheldon’s communication skills. He put out regular newsletters, faxes, and personal letters, and he visited large numbers of churches around the country. At its height, TVC was affiliated with over 43,000 churches across America. This became a huge lobbying force for TVC and the pro-family movement.

Within a few years, TVC established a second headquarters in Washington, DC. The organization purchased an historic townhouse two blocks from the US Capitol for its offices. Rev. Sheldon’s daughter, Andrea Sheldon Lafferty, was also a formidable pro-family lobbying force. The two of them were a regular sight in Senate and Congressional offices. Sheldon also visited the White House for meetings approximately 70 times over the years, and often met with the President.

The logo at the top of TVC's website - it was a go-to place for information and activism.

Rev. Sheldon and Andrea were skilled at leveraging their huge base of supporters when necessary. According to reports, much legislation in Congress went the “right” way because key Congressmen were threatened with primary opponents if they voted anti-family. This is rarely, if ever, done by pro-family groups today. But it worked. They defeated early versions of ENDA, a sweeping national pro-LGBT anti-discrimination bill. Homosexual leaders often complained that their legislative agenda would have been accomplished much sooner if not for Rev. Sheldon.

William Bennett, Reagan’s Secretary of Education, described Rev. Sheldon’s undiminished vitality to the New York Times: "He's here, he's there, he's everywhere," Bennett said. "He usually likes to operate where the odds are against him."

John Ashcroft, former US Attorney General laid it out this way, “A strong voice of the traditional values that have been the foundation of America’s greatness is essential if we are to have good government policy. We need to have these values expressed and no organization does that better in Congress than Traditional Values Coalition.”

TVC’s headquarters near the Capitol also had another useful purpose. It was illegal for members of Congress to do political strategizing in their government offices. So many of them, including Newt Gingrich, would walk over with their staffs to hold strategy meetings in the TVC conference rooms.

In 1989, Sheldon and TVC produced a powerful video titled “Gay Rights / Special Rights” showing in detail the dangers of the homosexual movement, and warning America. Sen. Trent Lott of Mississippi, William Bennett, Ralph Reed, and former US Attorney General Edwin Meese were featured in the video. It captured the interest of much of the country, and was duly attacked by the mainstream media.

But Sheldon continued to hold his ground. He told the New York Times that Speaker Gingrich did not "want kindergarten children or elementary school children being taught, where Federal dollars are involved, that the homosexual life style is just another kind of diversity."

2005, Rev. Sheldon published his landmark book, The Agenda – The Homosexual Plan to Change America. It is still considered among the best descriptions and analyses of the homosexual movement, its makeup, its strategies, its public health dangers, and its goals for society. 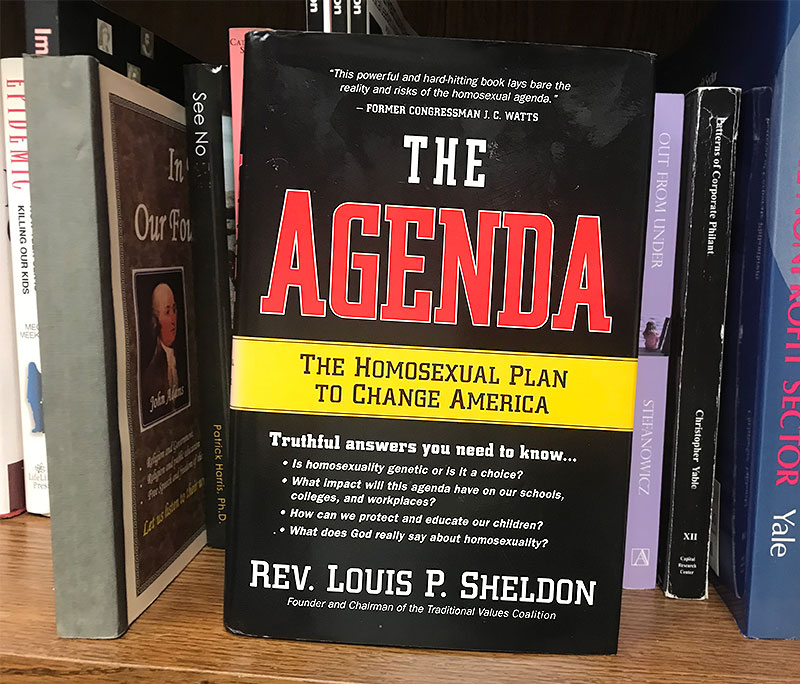 This book should be in every serious pro-family activists bookshelf!

In 2003, the Massachusetts Supreme Judicial Court made Massachusetts the first place to force “gay marriage” on the population. TVC did an extensive report on the ruling and its implications. He began working with members of the US Senate Judiciary Committee to craft a federal marriage amendment that would define marriage as a union between one man and one woman.

Over the next few years, as there were some attempts to pass a state constitutional amendment to overturn the “gay marriage” ruling, Rev. Sheldon made several trips to Massachusetts. He would often stop and visit the MassResistance office. We got to know him quite well. He was really an amazing, insightful person, and we are blessed to have known him.

Starting in around 2010, Sheldon turned over much of the TVC operation to Andrea and her husband James Lafferty, a seasoned Washington pro-family figure who had worked in the Reagan administration as well as for Newt Gingrich and other top legislators. (MassResistance has also worked closely with him on various projects.)

He was one of a kind

Rev. Lou Sheldon was a pioneer and a pro-family giant. He was there when the “Religious Right” opened its doors. He was always on the front lines, and never part of the pro-family establishment. 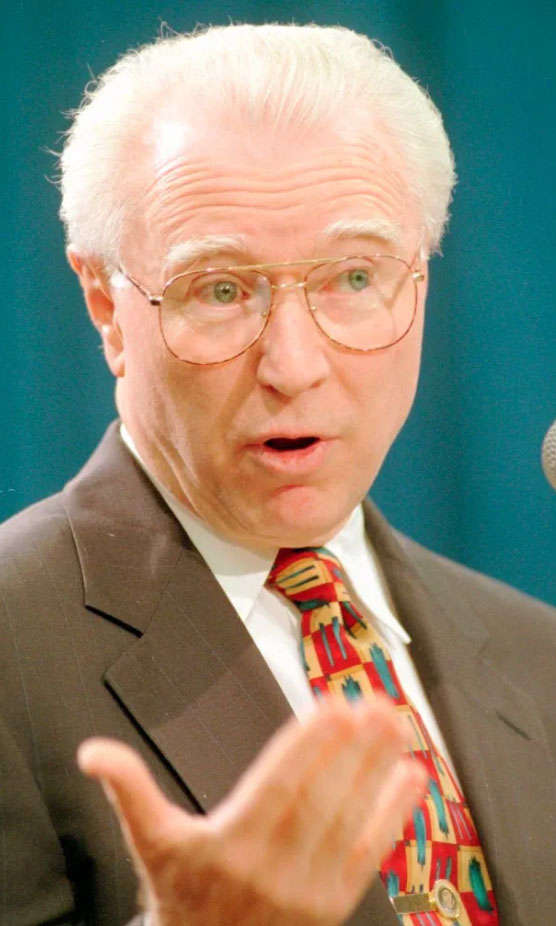 Rev. Sheldon was relatively soft-spoken - but would take on anybody, and usually came out on top!

He was not at all intimidated by LGBT activists or their hard-left allies. And he was unafraid to fight back whenever necessary. Once, the famous liberal New York Daily News columnist Jimmy Breslin simply made up a nasty quote from him and published it in the paper. Sheldon was relentless in confronting the publishers. Finally, they issued a retraction and an apology.

Unlike so many today, he was personally invested in this movement. It wasn’t just a business – as it seems to have become today for the big groups that don’t accomplish much. And he naturally understood retail politics and grassroots organizing, skills largely lacking in today’s pro-family establishment. He was a huge inspiration to MassResistance.

A few months before he died, a former Governor of California visited him and said, “Lou, I want to apologize to you. You were right and I was wrong. It is that bad.”

Rev. Lou Sheldon is survived by his wife, Beverly, four children, and eleven grandchildren. We will all miss him.