Chanukah's lesson about America in 2020

It's actually about fighting and winning a "culture" war against impossible odds.

History is full of seemingly hopeless situations that were overcome by people who refused to give up. If you do your part, God will do His. 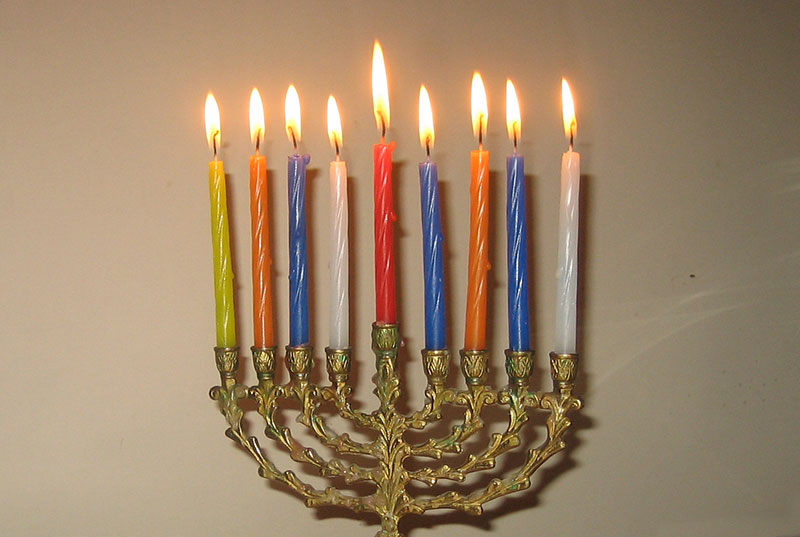 Since the November elections we have never seen so much despondency and despair. We're hearing from so many people who say they are depressed, see no way out, and are just giving up.

And, yes, things are looking worse than ever before.

Radicals running state and local governments. Massive election fraud. The Constitution openly ignored. Businesses across America forced into bankruptcy by government edict. The courts ignoring the rule of law. People being fired from their jobs for having the wrong political opinions. Left-wing violence openly allowed, but pro-family protest suppressed. Antifa and Black Lives Matter mobs allowed to take over areas of cities. The media's aggressive jihad against the truth. The homosexual and transgender movements celebrated in federal agencies. Religious beliefs suppressed and even punished in businesses, government, and public schools. The massive deficit. The "opposition" Republican leadership in Congress with no backbone or will to fight back. The looming oppression of all conservatives. And on and on.

At MassResistance we refuse to see things that way. We must continue to resist these evils!

Chanukah — now more relevant than ever

Today is the 5th day of the 8-day Jewish holiday Chanukah. Most people (and sadly, most Jews) see Chanukah as sort of a Jewish version of Christmas. They don't really understand what it's about and what it teaches us. It celebrates something very important about man and God.

Chanukah is in fact relevant to what we're going through right now. It's about struggling against and ultimately winning — with God's help — a seemingly unwinnable culture war against oppressive government and institutions that are thoroughly dominated by pagan and godless forces determined to permanently change society.

In the second century B.C., the powerful Syrian empire took over Israel. By around 170 B.C., they were ruthlessly forcing paganism and secularism on the country and banning traditional religious practice.

It got worse and worse. Pagan holidays, customs, and religious practices were harshly imposed on the citizens of Israel. Statues of pagan gods were erected throughout the country. People were required to bow down to idols and make sacrifices to them. If they refused, they were tortured and killed. Yet this aggression was supported by many Israelites who welcomed the “modern” changes. (Does this sound familiar?)

It came to a point where no public acknowledgement of God was allowed anywhere. Sabbath observance, study of the Bible, and other Jewish customs and rituals were completely banned. Bibles were destroyed where found.

Sadly, many Jews continued to embrace the pagan customs and willingly abandoned God. And most religious Jews simply complied and offered no resistance. (Does this sound familiar?) As a result, the anti-religious oppression continued unimpeded.

Finally, a small band of unyielding believers had had enough. Known as the Maccabees (from the Hebrew word for "hammer"), they revolted in their village and then fled into the hills. They formed a resistance movement, and gathered a guerrilla army to win back their country. Such a feat was considered impossible against the powerful Syrian empire controlling the country. But the Maccabees fought on.

They refused to give up. Their guerrilla encounters became bolder and bolder. Many Israelites joined them, resulting in incredible successes against the Syrian forces. It was shocking. They had victory after victory. Within three years, they drove out the Syrians and took back their country. With God's help, they finally won!

And they brought God back to Israel. Almost immediately, the Maccabees came into Jerusalem to clean out and re-purify the Great Temple, which had been turned into a pagan shrine where pigs were being sacrificed.

But as they re-dedicated the Temple, they found only a one-day supply of holy oil to light the sacred lamps. That one-day supply miraculously lasted eight days - until more holy oil could be made. From that miracle, an eight-day celebration of Chanukah (which means "dedication" in Hebrew) has continued ever since. 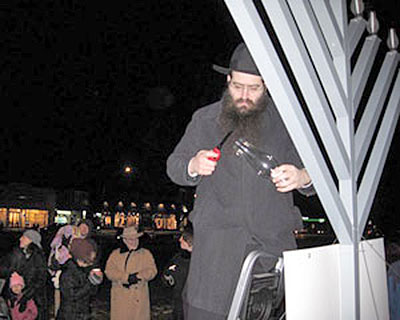 Fighting the culture war. Rabbi Moshe Lieberman lights Chanukah menorah on the public green in Newton, Mass., one of the most left-wing cities in the state, as members of his congregation look on.

Taking back your country

Thus, the holiday of Chanukah is actually about fighting and winning a war against oppressive and vicious state-forced paganism, and overcoming near-impossible odds.

This ought to be an annual lesson for us. Even though the forces ruling us want to drastically change society and replace God in our lives with the secular State and ever more ruthlessly impose Godless secularism on us throughout society, do not give up. The battle is not lost. Seemingly impossible circumstances can and will be overcome with God's help.

That is God’s message to all of us. But you must be willing to fight back. If the Maccabees hadn't stepped up, what would have happened?

History is full of seemingly hopeless situations that were overcome by people who refused to give up. The American Revolution is a good example. And more recently, the world saw how a few revolts by determined people spread and ultimately brought down the vast Soviet empire, which at that time no one thought was possible.

But we must be willing to take action

Finally, we believe there's yet another message to Chanukah. You can't sit on the sidelines. It's necessary for people to leave their comfort zones and take action, if victory is to come.

Lately, many people have been saying that they've decided to fight this battle by just praying and fasting. Well, praying and fasting are good things. But the message of Chanukah is, that is not enough. People must join the fight.

It's the universal lesson about fighting against seemingly hopeless odds: If you do your part, God will do His.

Here at MassResistance we have lots of plans for 2021.

America isn't over yet!