As usual, their work is full of lies, misinformation, and twisted logic

SPLC’s aim is not truth, but to destroy conservative groups

MassResistance is not going to be intimidated!

The Southern Poverty Law Center (SPLC) has published a bizarre attack article on MassResistance - in response to our telling the truth about Black Lives Matter and our activism helping citizens confront it. Not surprisingly, the article is full of lies, misinformation, and twisted logic – which has become the “meat and potatoes” of liberal discourse.

As most people know, the SPLC is an extremist left-wing group. It raises enormous amounts of money from liberal donors by smearing and libeling conservative, pro-family, and religious organizations as “hate groups.” The SPLC has been discredited across the political spectrum for its dishonesty and internal corruption. Yet the mainstream media and rabid left-wing activists shamelessly use it to label those who disagree with their liberal ideologies.

This isn’t the first time the SPLC has gone out of its way to attack MassResistance. In 2018, they published a sleazy article attacking Arthur Schaper, our national organization director. In 2017, they published a disgusting article attempting to demonize our state chapters. In 2010, they purposely twisted (and made up) quotes from Brian Camenker, which we debunked here.

Like most of the left-wing press, the SPLC seems incapable of engaging in anything but hysteria and nonsensical attacks. They use the puerile term “Hatewatch,” to appeal to liberals. And they present their diatribes as some kind of serious journalistic research. 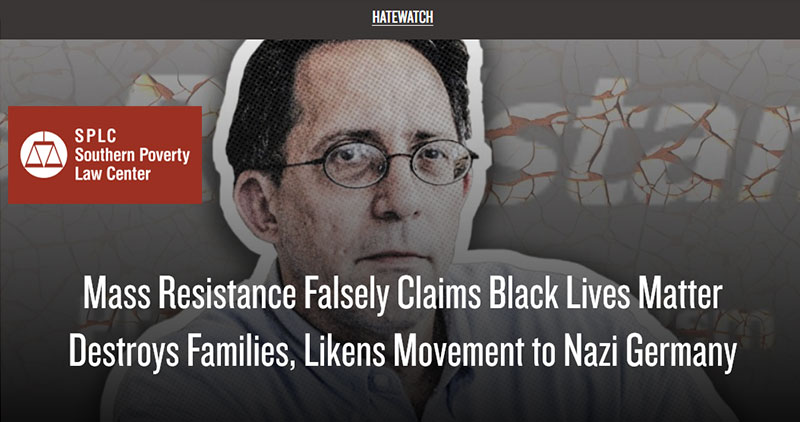 Like in middle school? The SPLC's childish tactics include posting a "scary" Photoshopped picture of MassResistance president Brian Camenker's face at the top of its article.

Their attack article, point by point …

Let’s cover the lies, dishonesty, and twisted logic point by point in SPLC’s latest hit piece against us. It refers in particular to our June 11 article on Black Lives Matter (which they refer to as a “blog”).

This is a deliberate twisting of words. We did not claim that BLM destroys any particular families. We said that their goal was the destruction of the family structure. We quoted their own website: “We disrupt the Western-prescribed nuclear family structure…”

We did not liken their movement to the nation of Nazi Germany, which sent people to concentration camps. We likened BLM to the Nazi Brownshirts, which was the Nazi Party’s violent terrorist organization. We said, “Their violence, disruption, and intimidation tactics are reminiscent of the Nazi Brownshirts, the true original fascists.”

This is left-wing nonsense. Anyone who watches TV can plainly see that the BLM rioters are angry and violent. It’s simply a fact. It has nothing to do with “racist dog whistles” or “pervasive stereotypes.” In fact, the most angry and violent rioters seem to be white people.

More twisted logic. This is a quote from a left-wing college professor that the SPLC included in the article. It reflects the bizarre, destructive thinking that goes on in our universities.

We simply said what many others have also observed: Black Lives Matter does not care about freeing black people from the problems that are keeping them down – which also includes horrible inner-city schools, gangs, and dependence on government. These are real issues that are being ignored. It has nothing to do with “blackness” or any absurd “anti-black trope.” It has much more to do with left-wing government policies.

The fact that BLM (and SPLC) does not care about these problems and instead wants to simply destroy property and social stability says much more about them than it does about us.

The SPLC research experts seem to have trouble reading maps. Waltham is located 2 ¼ miles from the city limits of Boston (and is about 4 miles across).

It’s not just a “claim.” It’s true. As mentioned above, we quoted from BLM’s own website:

(NOTE: BLM has gotten so much bad press from those statements that they’ve recently removed from public view their infamous “What We Believe” page with their more outrageous goals and positions. Instead, they modified their “About us” page to include less offensive material. But we saved the old one. You can see it here.)

Arthur has also not been head of the California chapter for nearly two years.

This reflects another odious SPLC tactic. They quote extremely biased and untrustworthy left-wing media reports about conservatives without doing their own research. Arthur never said anything resembling “anchor baby” – and he complained to the Los Angeles Times about the phony quote.

It’s become quite common for the SPLC and the left-wing media to quote each other in their conservative-bashing, with neither caring about the other’s blatant unprofessionalism.

What the SPLC (and the Times) don’t mention here is that the leftists were screaming the most vile and disgusting things at Arthur and the others, such as “F**k Trump.”

This is a typical SPLC defamatory lie. Kenny Strawn is not a white nationalist, nor has he ever been one. He has never professed so-called Identitarian beliefs. He once briefly met with Identity Europa because they espoused pro-life and pro-family views. When he found out about their ethnic nationalist views, he distanced himself completely from them. The SPLC’s subsequent defamation of him has caused him great harm.

This is more illogical nonsense. The SPLC (and others on the Left) conjure up straw-man ‘movements’ (such as ‘alt-right’ and ‘alt-lite’) made up of alleged but completely unproven “white supremacy,” “xenophobia,” and “misogyny.” Then they make claims that people have “ties” to these movements through an absurd set of connections (or no specified connection at all), and therefore they are dangerous people. Their aim is to enable horrible smears against individual conservatives. (And in this case, they ignore the satire behind the “Straight Pride” event in their zeal to demonize it.)

This is a sleazy attempt to intimidate anyone else from criticizing Black Lives Matter. It’s just nonsense. They smear legitimate criticism of BLM with the tiresome phrases of  “engaging with racist tropes and dog whistles” or part of “institutionalized white supremacy.”

In fact, those tactics are simply a way to avoid addressing real problems. Conservative critics are clearly not blaming black people, but destructive leftist policies.

Black Lives Matter riots are responsible for unbelievable destruction of property, terrible attacks (and killings) of police officers, and a wave of terror across America. They publicly burn Bibles and American flags to make sure that we all know where they stand and what they think of regular Americans. They are now bringing their poisonous ideology into public schools across America.

Despite this attack on us by the SPLC in an attempt to silence us and others, MassResistance will not be intimidated from speaking out on any of this.