Why there were no fears of post-election riots in Montana

Around the country businesses boarded up their windows before election day.

Our Montana MassResistance activists show why things remain calm there! 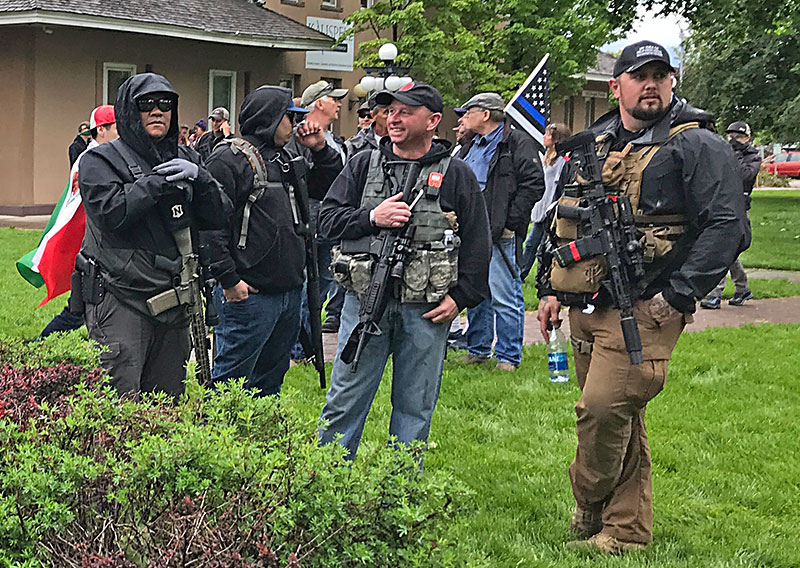 When hundreds of fanatical Black Lives Matter demonstrators descended on this Montana downtown park, some of the citizens came to make sure that it really was peaceful! [All photos by MassResistance except where noted.]

In cities and towns across America on Nov. 3, people braced for post-election riots and destruction by Black Lives Matter (BLM) and Antifa – a continuation of the violence those groups had been committing for months – which had been threatened by top Democrats. Store owners boarded up their windows. Police were put on alert, and in some places the National Guard was called up. 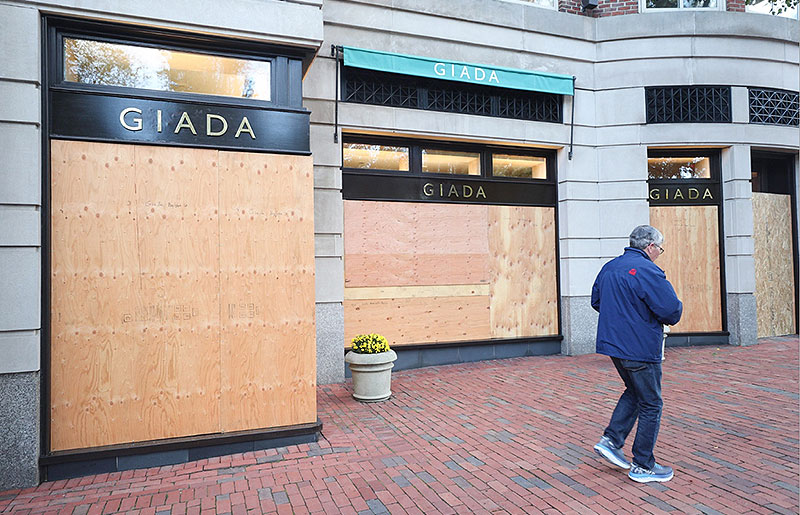 Store windows in downtown Boston the day of the election. [Photo: NBCBoston.com]

But not in Montana. Earlier this year, Black Lives Matter and Antifa got a clear message that their brand of intimidation and violence would not work there! Here’s just one story.

On June 6, hundreds of agitated BLM-allied leftists converged on Depot Park in the center of Kalispell, Montana for a so-called “protest.” Kalispell, a small city north of Missoula in the northwest corner of the state, had not seen anything like this before.

Many locals feared that a mob would attempt to deface or destroy the Flathead County Veterans Memorial in the center of the small downtown park, as BLM activists had done to other monuments (particularly those involving military figures) across the country. And neighborhood businesses were on edge. 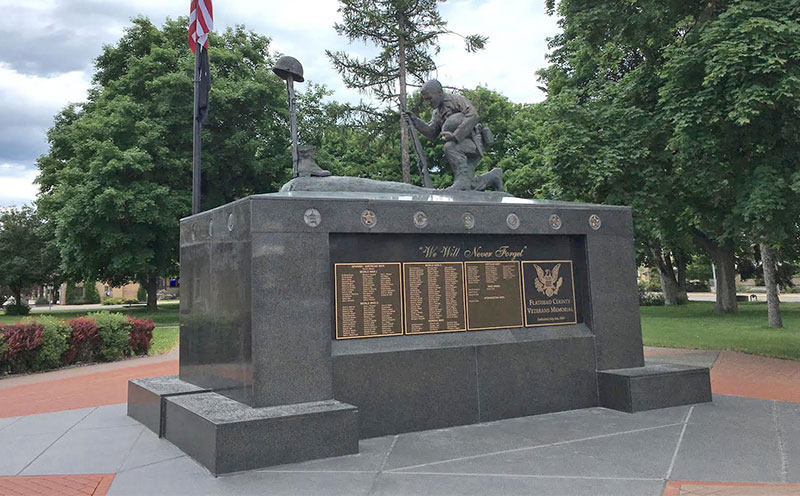 But when the BLM supporters arrived, the area around the monument was surrounded by dozens of well-armed local citizens. (Montana allows open-carry of firearms without a permit.) And the locals were prepared to also protect the nearby local businesses if necessary.

As a result, everything was peaceful. The leftists got the message! The virtue-signaling local people were surprisingly restrained. They stayed on the side of the street with their signs and banners and didn’t even block traffic. Even the more surly rabble-rousers held back.

Here are photos taken by our Montana MassResistance chapter: 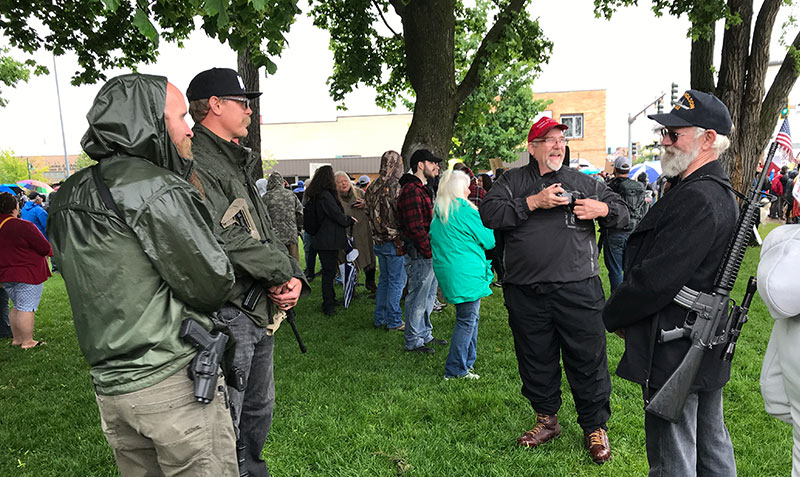 When the BLM mob showed up at the park, local townspeople were there, too. 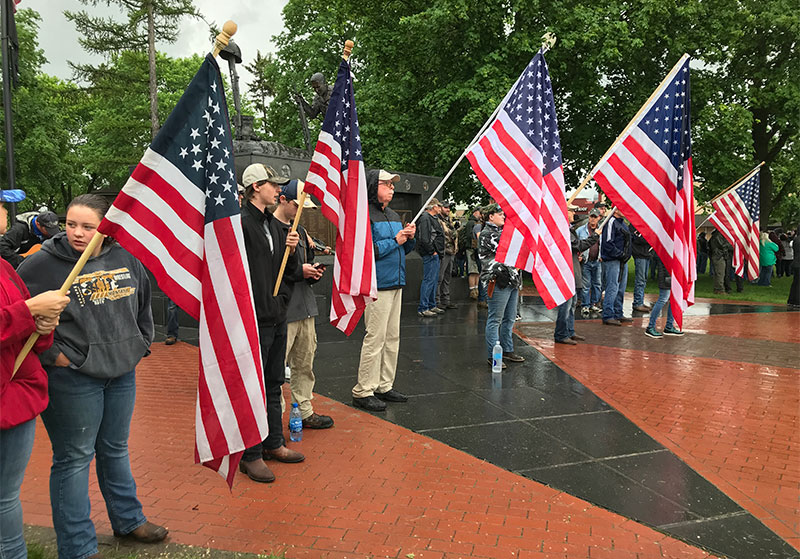 This was the scene in front of the Veterans Memorial. 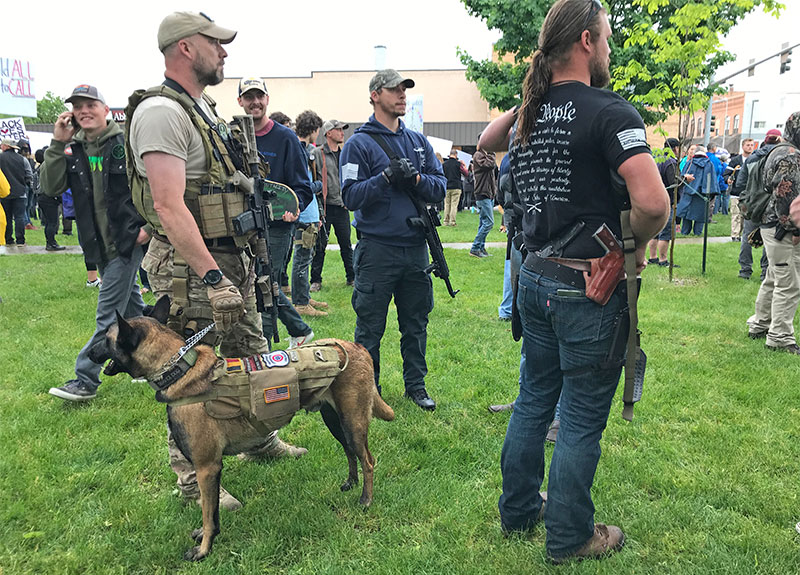 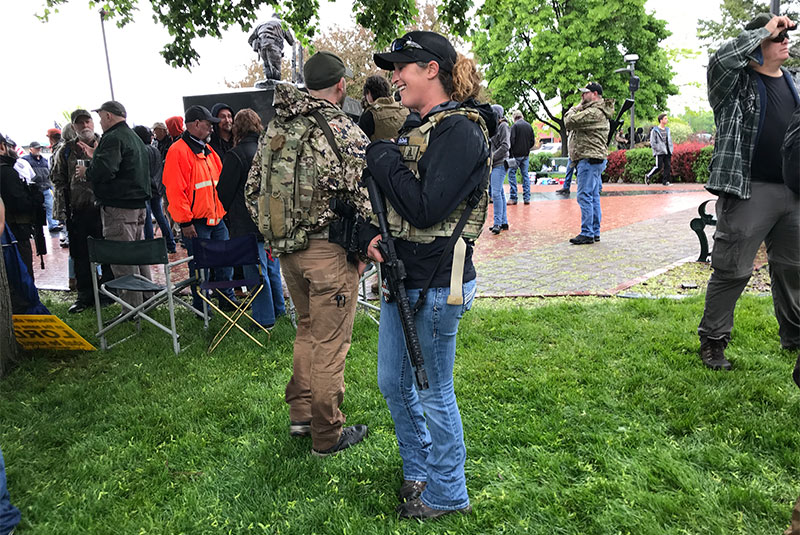 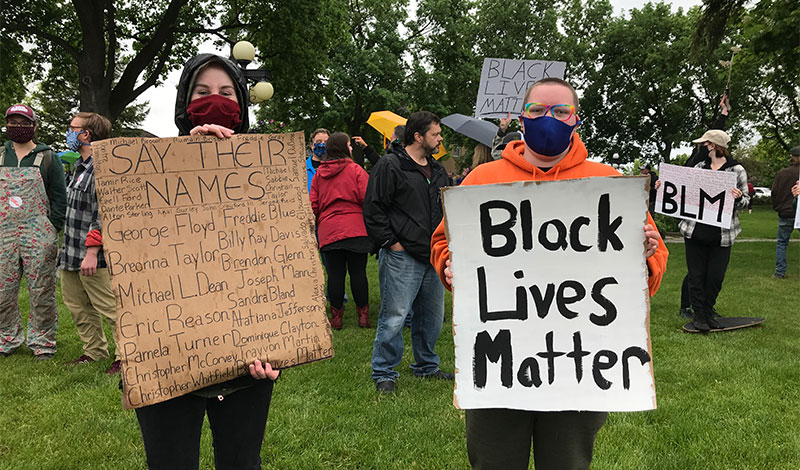 A few of the early BLM arrivals. 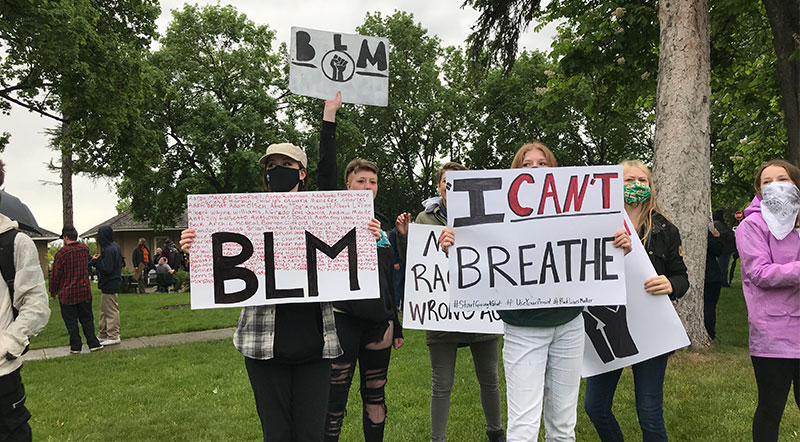 There were a lot of mindless virtue-signalers. When we asked a woman about her sign that said "Against Fascism" she couldn't explain what fascism is. 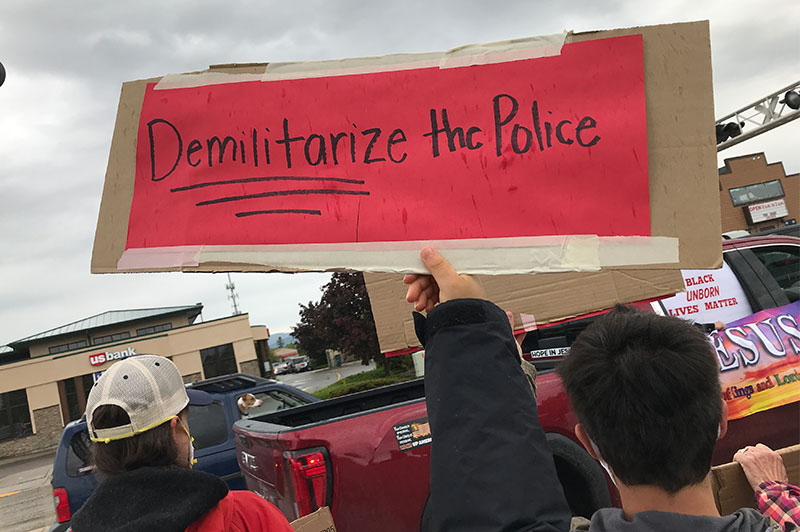 The police in Montana aren't exactly "militarized." But ... whatever. [Note the passing pickup truck's message to the demonstrators: "Black Unborn Lives Matter."]

There were several hundred in the Black Lives Matter crowd, and many of them were quite agitated. But this time they peacefully lined the street around the park and didn't even block traffic. 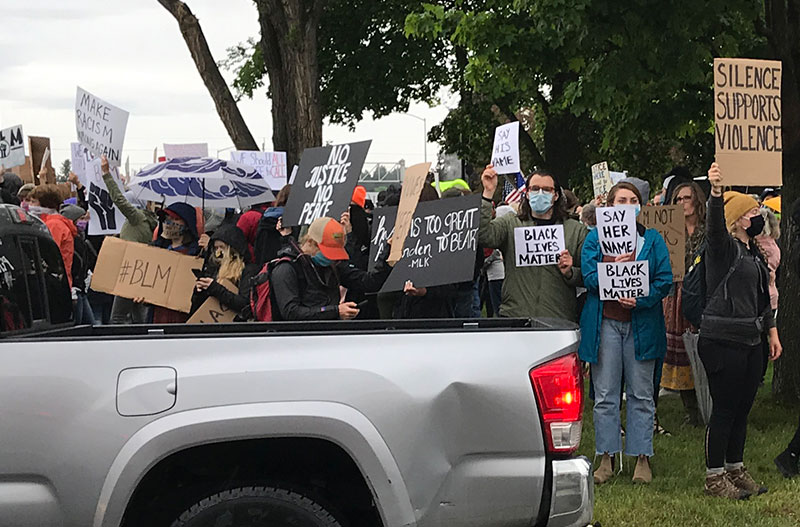 Naturally, there were a lot of juvenile signs. 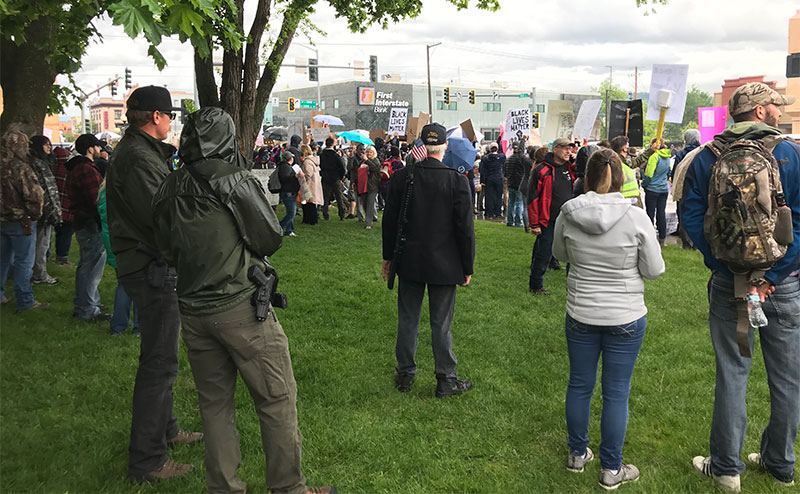 A view from the back of the crowd.

And the word got around. There haven’t been any Black Lives Matter or Antifa problems in Montana.

How civilized life was intended

This is, of course, what the founders of America intended. Regular citizens who have a stake in the community are supposed to be able to protect themselves and others, especially at times of civil unrest. For most of our history, that’s how things were.

Unfortunately, in most of the country people now continue to live in fear of uncontrolled, lunatic mobs burning and looting buildings, tearing down monuments at will, and even attacking (and sometimes killing) bystanders. People living in fear and insecurity gives power to the Left and elected officials. And to make things even worse, the fake-news media viciously distort legitimate self-defense by citizens. But it’s not what America is all about. 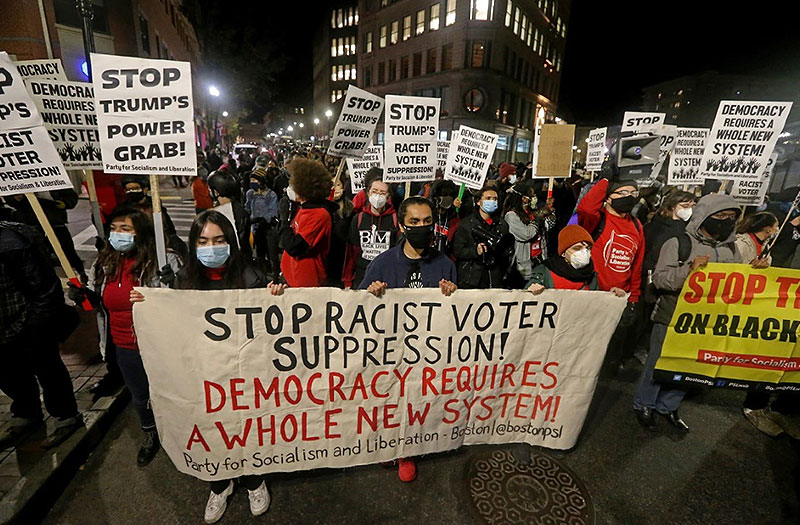 This was the scene in Boston the night after the election. Rabid "protesters" came and took over the streets. The Governor had to call in the National Guard to keep them from destroying property and looting. {Photo: Boston Herald]

Other attributes in Montana

Montana is quite civilized and normal. This is largely because most citizens are serious about preserving their Constitutional rights. And it’s much more than just self-protection.

They have maintained fair elections: At the polls, voters always had to show their photo ID to cast their ballot. Although this time most counties opted instead to go to mailed-in ballots, local election offices still kept the process clean. (It helped that many Montanans hand-delivered their ballots to election offices, rather than trust the US Mail.)

As a result of having a legitimate process, President Trump won Montana with 57% of the vote, and Republicans won the races for Governor, US Senate, US House, and all the major statewide offices.

We’ll see what happens in the rest of the country …