Here’s how to do a “Support the Police” rally - the right way!

It needs to be at the right place - and send a strong message to the right people. 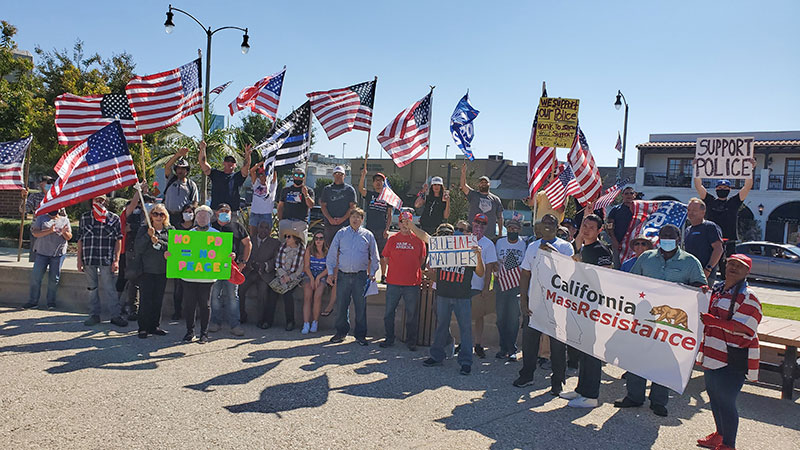 MassResistance activists in El Segundo, CA, showed the local conservatives how to a "pro-police" rally that makes a difference!

Most pro-police rallies by conservatives are, unfortunately, ineffective and even counter-productive. They are often held on a street corner somewhere and are full of “positive” messages. But do these keep the police from backing down and taking a knee at the next Black Lives Matter rally? Or keep the police from hassling conservatives who protest (or who open their businesses) because we’re usually an easier target? Do the police even know that you held a rally supporting them?

Back in July, Black Lives Matter was rampaging across California terrorizing everyone and pushing their Marxist, anti-family demands. Most of the time the police response to the lawlessness and intimidation of public officials was weak or non-existent.

But we did things right. On July 25, local California MassResistance activists fought back by holding an aggressive pro-police rally in El Segundo (a suburb of Los Angeles). 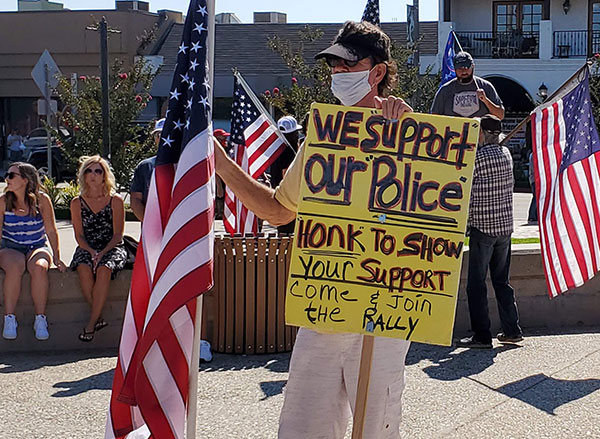 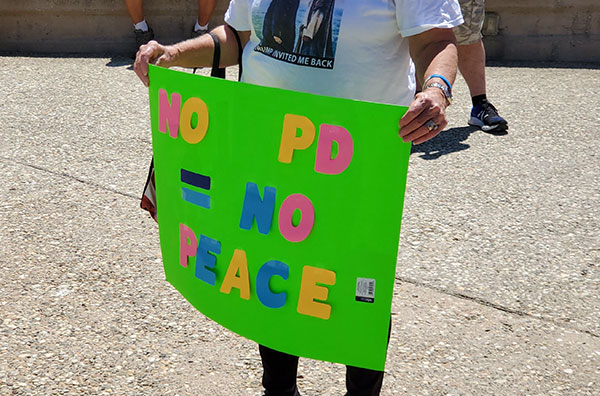 Basically, this is the message that too many people haven't figured out.

Here’s what we did differently:

1  We held the rally right outside of the El Segundo Police Station. That way the police knew that we were there, and could see everything that we were doing. We were essentially sending a strong message to the police force, and we wanted to make sure they got it! Some of them came outside and watched. Two officers watched from the roof! 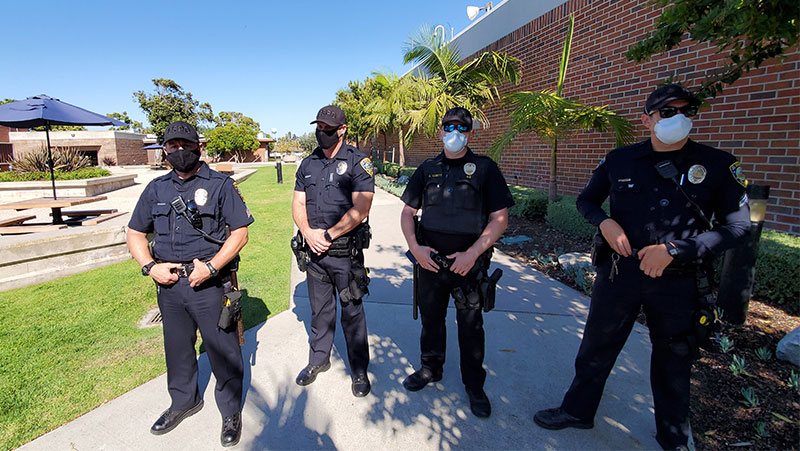 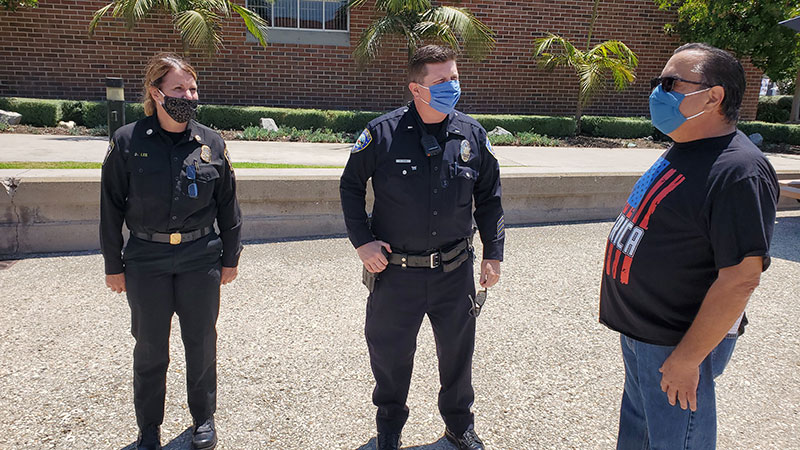 A few came over and talked with us. 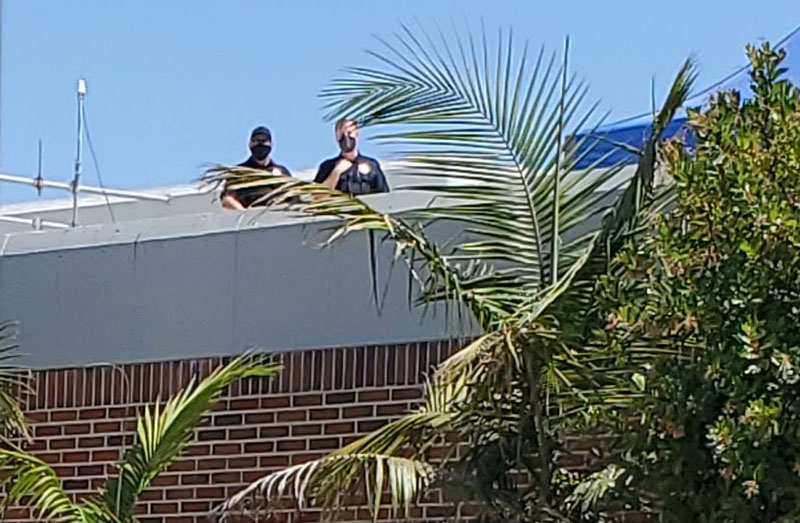 And for some reason, two of them watched the rally from the roof of the police station.

2  It was not just about “backing the blue.” The rally was also directed against Black Lives Matter and its toxic anti-American message. The police needed to see that members of the local community strongly condemn that horrible group. But more important, the police need to understand that they have a constitutional obligation to protect the public from BLM’s violence and harassment – not back down from it! 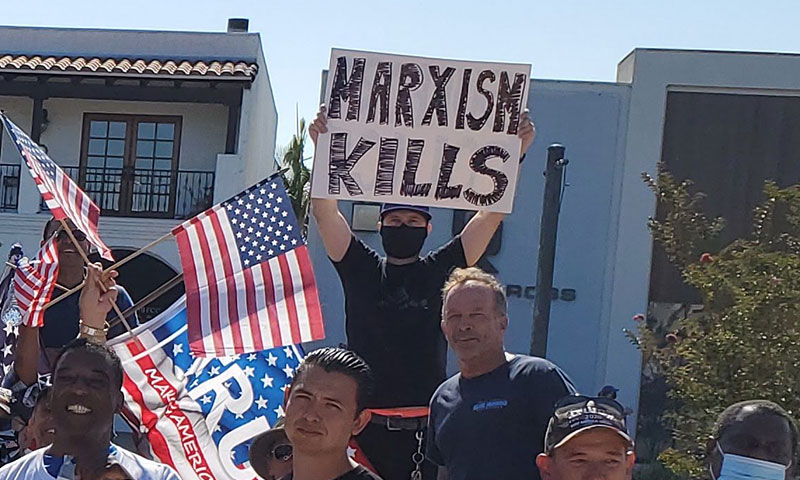 This is the message that we wanted to make loud and clear! 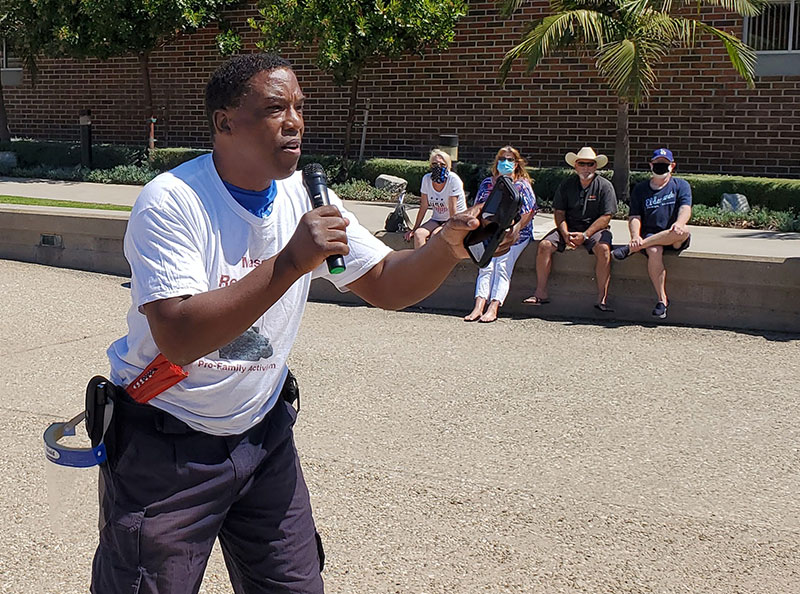 This MassResistance activist told the rally how we are in an ideological war of Biblical proportions - and we need to be strong enough to take it on! 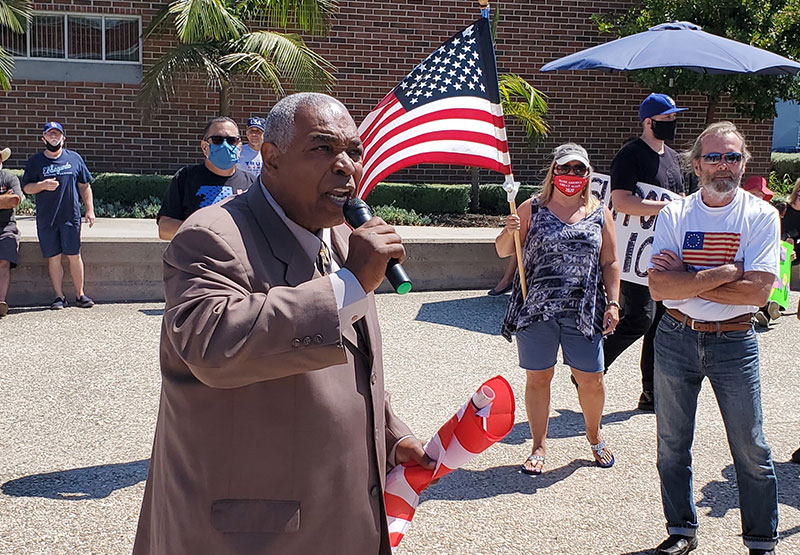 This speaker asked the question: If black lives matter to liberals, why don't black lives matter in Chicago and Baltimore and other cities where blacks are being killed almost every day? Conservatives seem to be the only ones who worry about them!

In other words, the rally was letting the police know that we have their backs and will defend them in the public arena. But they have an obligation to do their job and protect regular people – and also not illegally harass them just because the political winds are blowing in that direction.

3  We confronted the Black Lives Matter “protesters” who came to disrupt the rally. We got right in their faces. We made them explain their positions and what their moronic signs meant. Of course, they were unable to rationally explain anything.

The BLM crowd is basically made up of extremely angry, very profane, mindless young people (mostly female) who hate America and get a thrill from intimidating others (including police and public officials) and violating our rights. That works most of the time for them, but it didn’t work at all this time. 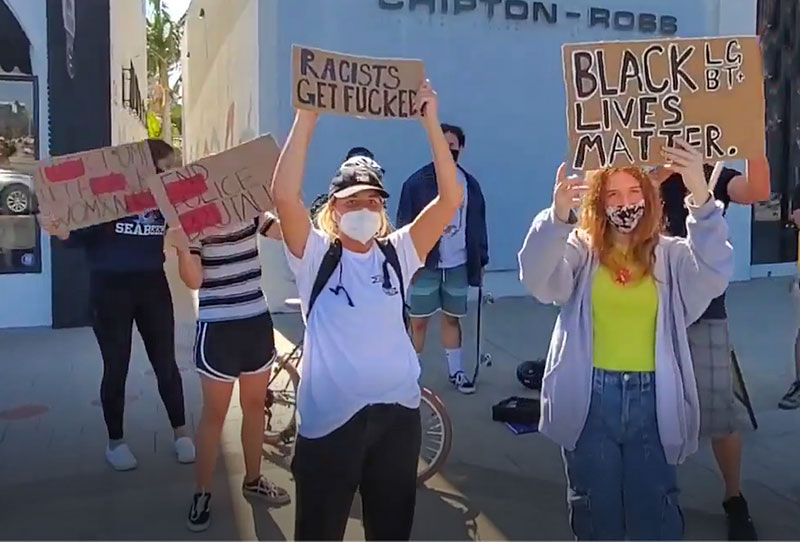 Across the street, some Black Lives Matter activists gathered with their mindless, profane signs and thought they could intimidate us. 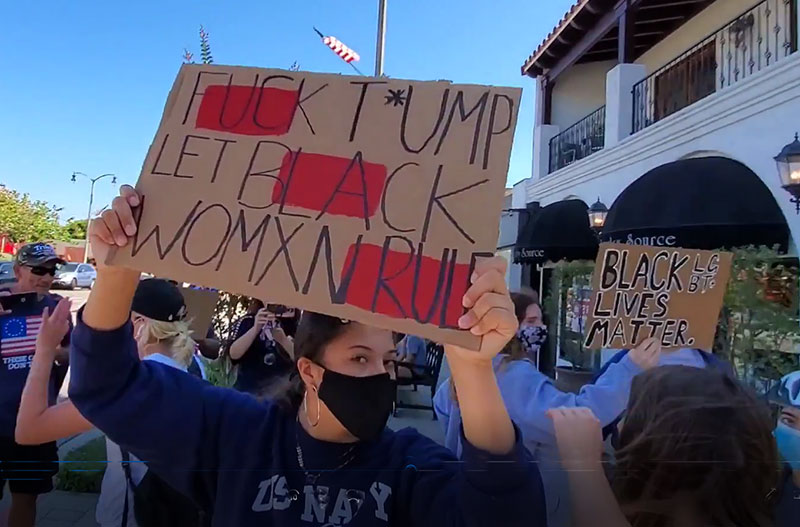 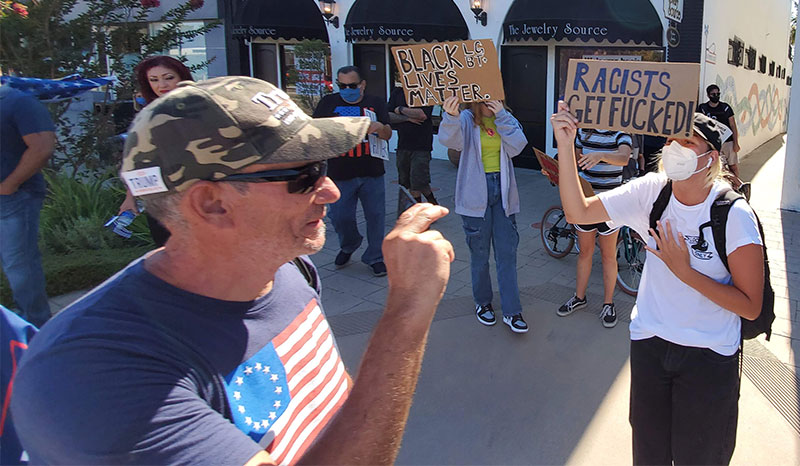 But our people came right up and confronted them, making them explain themselves - which they couldn't rationally do.

Two of our people - woman at left and man at right (with flag) - came and stood right there! 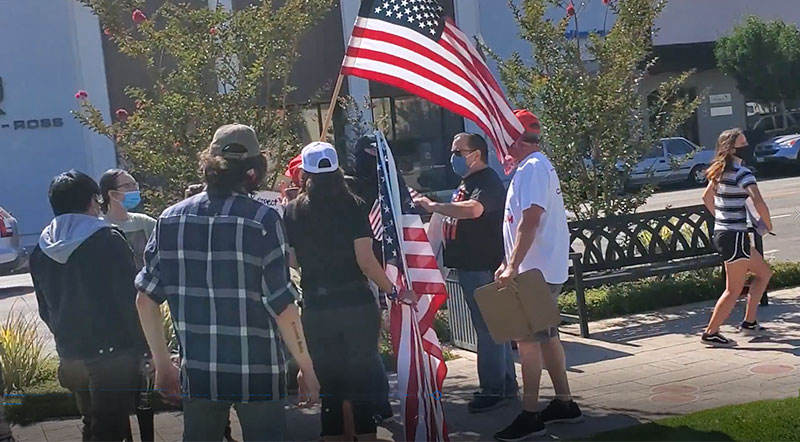 Then several Black Lives Matter people crossed the street to enter the rally. Immediately our people surrounded them and questioned them further! Note at right, one of the BLM people couldn't take it and ran away!

Conservatives need to think strategically, not just do what “feels good” at the time. The Left often seems invincible, but in many ways they’re like a house of cards.

It was a great event - fun and effective. A lot of people showed up and sent a strong message to both the police and BLM. They also sent a message to each other – that even in California regular people can stand up and start taking back the streets and public square from these anti-American hooligans.

MassResistance is helping people across the country to do the same thing! 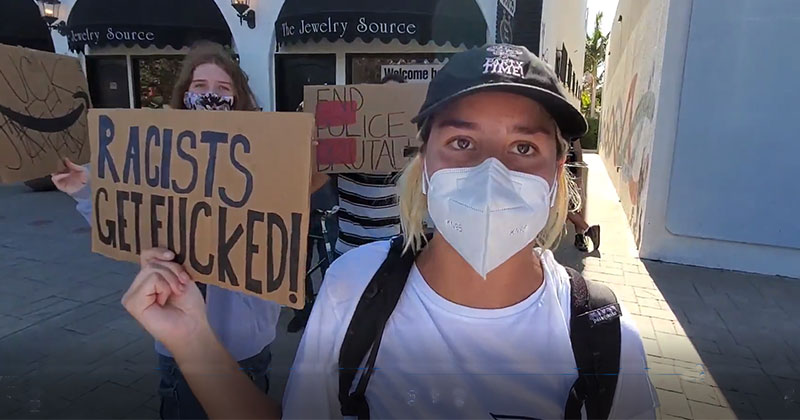 And what about abortion? When we asked her if black babies' lives matter, she wouldn't answer the question. She just stood there staring at us.