Local citizens confront County Commission on pornographic children’s books in public library. But library director, LGBT activists come to defend the books. The battle is on!

Parents and citizens give direct and unflinching testimony.

But they're up against lies, deception, and twisted logic from the other side. 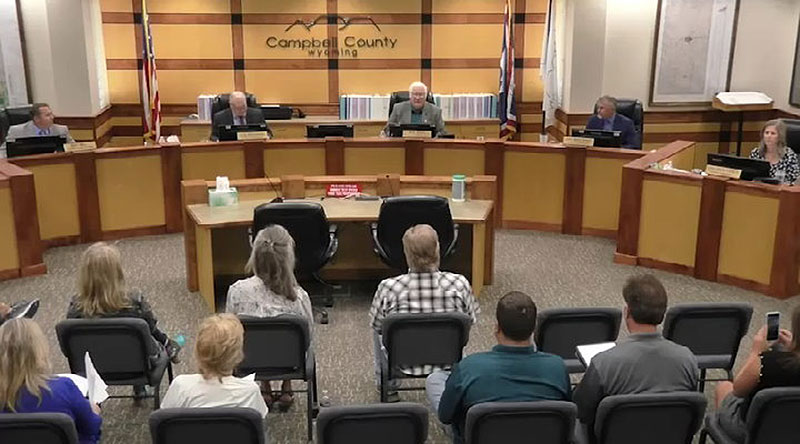 The County Commission wasn't ready for all these people to come in and confront them over this.

In Gillette, Wyoming, the battle against pornographic library books for youth didn’t take long to ignite. The lies, deception, and twisted logic that the supporters and library officials use to defend their policies, however, are almost as disturbing as the books themselves. But the Wyoming MassResistance group is not backing down!

Earlier this summer, as we recently reported, local citizens in Gillette, WY, began to notice that a lot of lurid pornographic and graphic homosexual and transgender books had appeared in the children’s and teen sections of their local branch of the Campbell County Public Library. Apparently, the books originally showed up around “Gay Pride Month” this past June, which the library prominently celebrated.

Compounding the problem of the pornographic and LGBT books, there are virtually no books in the children’s sections with a Christian worldview. But there seem to be many books promoting Satanism (some in a grisly manner) or other anti-Christian themes.

How can they deal with this situation?

Campbell County has a Library Board that oversees the operation of the county’s library. And clearly, the Board wasn’t doing its job. But the Library Board members are appointed (and can be dismissed) by the County Commission.

So, the local citizens decided to attend the July 7, 2021 meeting of the County Commission to demand that something be done about this.

The “public comments” from parents and citizens are very direct!

The parents and citizens came and filled most of the room at the July 7 meeting. About a dozen of them gave testimony. They were very well-prepared, articulate, and passionate. The video of the July 7 public comments section is posted here (starts at 3:59).

They described in detail the books that were in the children’s and teen sections. They brought copies of several of them. They also talked about what the LGBT propaganda does to confused and impressionable teenagers. Some spoke from their own experiences as teenagers and a few were teachers who described their observations. One parent talked about a local 12-year-old girl who now insists that she is “poly-sexual.”

One local teacher explained that kids are searching for truth and meaning, and are looking for role models. But these books steer them in a very destructive direction. Others who testified agreed that the LGBT influence causes unhealthy and ruinous behaviors in young people, ultimately turning some of them suicidal. 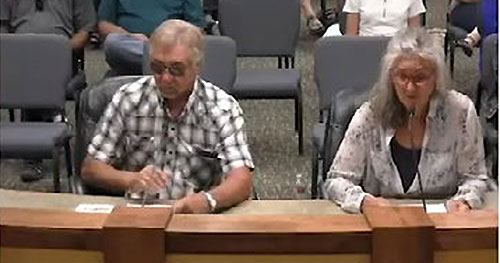 This couple has a friend whose 12-year-old daughter has decided that she's "poly-sexual." Where does she get these ideas? From the radical propaganda being given to children in schools and libraries. 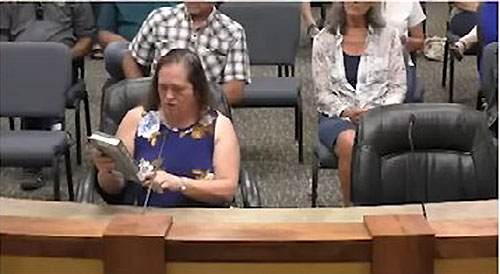 This woman held up one of the books in the public library for young people: "All Out: The No Longer Secret Stories of Queer Teens Throughout the Ages." 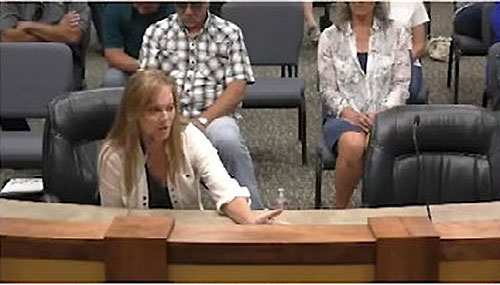 This local teacher told the Commissioners that things are going in the wrong direction, it's causing a lot of problems with kids, and they need to do something about the Library Board because it has not been representing the community.

The supporters of those library books also spoke up

Somehow the word must have gotten out that the parents were coming. By coincidence, the Library Director also came to speak, along with the adult leader of the local chapter of PFLAG – a well-funded national organization that “supports” LGBT children, teenagers, and their families.

These LGBT advocates are passionate about making those graphic materials readily available to the children in the community. They use the well-crafted rhetoric and twisted logic that the LGBT movement has honed over the years to deal with so-called “bigots” who disagree with them.

The president of PFLAG Gillette got up to speak. She said:

I am the president of PFLAG Gillette. PFLAG is a support, education, and advocacy group for the LGBT community. I have a diverse family. I have children that identify as LGBTQ. We feel there is a great need in this community for more education.

I think the answer to a lot of what has been talked about is more education. So if the library does have books on the LGBTQ experience that’s a good thing. I have read some of the books there and they give a more fuller [sic] picture, a more human side to the experience of parents like myself. This is a country where we pride ourselves on the ability to access materials and free speech. So I would support the library in their book collection and thank them for having the courage to put that information and those books out there. 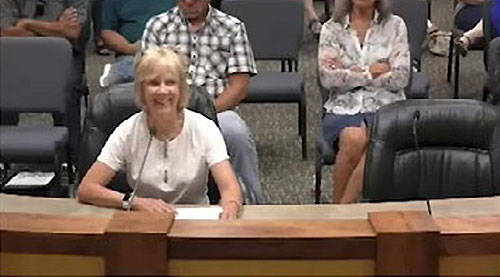 The president of the PFLAG chapter in Gillette.

This is well-crafted nonsense. No one is claiming that her children are child predators. But they are claiming that the library staff are very dysfunctional and malicious, and that presenting sexually graphic books to teens will encourage experimentation. There is a “gay agenda” and we’ve all seen its effects on society (“same-sex marriage,” the transgender craze, the rapidly growing numbers of youth identifying as LGBT, etc). No one is “born that way.”

Like many parents of “gay” children, her solution is to “educate” everyone else’s children. It is obvious that giving children “more education” about perverse and unnatural homosexual and transgender behaviors only leads to experimentation, confusion, and emotional problems.

But most offensive is her comment about having “free access” to materials. That applies to adults, not children. The LGBT movement uses this as an excuse to push their agenda on vulnerable youth.

A pro-family mother then came up to speak

A pro-family mother then got up to speak. Regarding PFLAG, she said that she led a youth group in the community for years. She said that several of the kids also went to PFLAG meetings and told her that “none of them believe it; they just go for the free pizza.” (But many are drawn in nevertheless.) One boy told her that PFLAG told them to “bring in the lonely kids” – which she finds extremely disturbing.

The mother then described to the Commission members what she recently saw in the library:

I encourage all you to go to the library and look at the Teen Room. I went in yesterday. I’ve never seen anything darker. I saw topics using words such as witchcraft, spells, dark, shadows, covens, blood, and curses. There’s also a book on surgically removing male genitals. They also have a large Black Lives Matter section, which we all know is Marxist in its roots. There’s no evidence in the Teen section of the kinds of books I grew up with, or you grew up with. It was all dark.

Even the toddler’s section has books such as one with a grandmother who’s mean and evil, who keeps a girl as a prisoner in her house, and drinks blood in a ritualistic manner – and on one of the pages there’s blood everywhere! [She held up the book and showed the pages.] There’s something very wrong at the library. 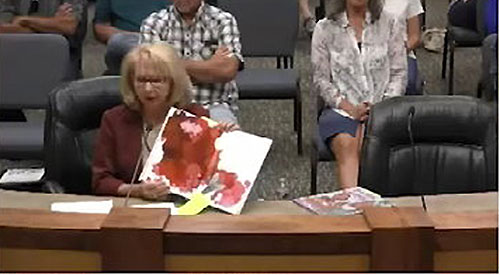 Holding up a page showing blood everwhere - from a gruesome book in the toddler's section.

The Executive Director of the library then spoke. Here is how she answered the mother’s comments (and the other parents’ comments) about the books in the library:

We have a collection development policy that requires us to vet everything that we bring into our library. There are many journals that we use, a school library journal for example. We go through a rigorous process. There’s also a process that our items can be challenged, that our Library Board can ultimately become involved in.

The mission of the library is to provide the first cultural opportunities for reading, learning, and entertainment to all citizens of our community. So there are going to be a wide range of diverse opinions, a wide range of things that people are going to want to get from the library. We consider ourselves neutral. We don’t consider ourselves political. We just try to provide a collection and programs that speaks to what people in this community want. That’s what we do.

I really respect and appreciate everyone’s opinion who spoke today. I think though that there are a lot of opinions out there that might be alternate. We can’t take sides. We are a neutral place. 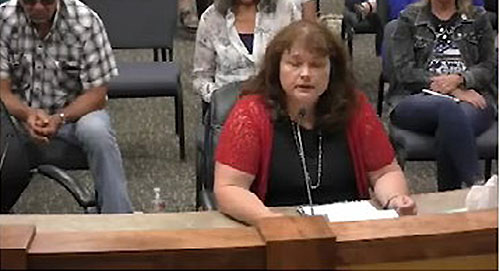 The Executive Director of the Campbell County Public Library.

To put it bluntly, these are well-crafted lies and twisted logic. You cannot be “neutral” when it comes to harming children, especially with pornography and sexual material. And when she says “we can’t take sides” who does she think she’s fooling? Anyone who looks honestly at the library sees a monolithic left-wing and LGBT social agenda. There are virtually no books or other materials that counter that. Moreover, there is no “rigorous vetting program” of books – at least not by anyone with any common sense.

An underlying message was that the parents are out to “ban books” – a well-worn distortion promoted by the American Library Association meant to shame parents. There’s a major difference between “banning” what adults read – which the parents are not doing – and protecting vulnerable children from harmful material.

After that, a pro-LGBT lady came up to speak. She said that her grown goddaughter is “gay.” She claimed that the parents speaking today were showing animus against “gay” adults, and that angered her. “They’re not perverse, they’re just choosing to live this lifestyle,” she said. That’s a common strategy: to deflect the argument from the horrible content in the books and any true portrayal of LGBT behavior. Instead, there’s an attempt to shame the people who speak up by accusing them of “animus” or ill-feeling towards particular individuals.

What do the parents want?

At the end, the mother who spoke earlier got up again and addressed what the parents wanted the County Commission to do. She was very direct:

Our Library Board has lost all credibility. It’s not just a lapse in judgment. They’ve betrayed the children and community. They all need to be removed. We can no longer trust them.

She might have added that the Library Director – and probably others on the staff – also need to be shown the door. Normal people do not do these things to children. These people should not be employed by a public library where they can affect what is presented to youth.

Where will this lead?

This is a city that voted 86% Republican in the recent election. But there’s obviously still a lot of work to do. And these Wyoming MassResistance parents and citizens are willing to do it! Their approach that day was refreshingly honest, direct, and fearless.