State Board of Education balks on moving forward after facing hundreds of parents.

LGBT groups had been pushing for “inclusion.” 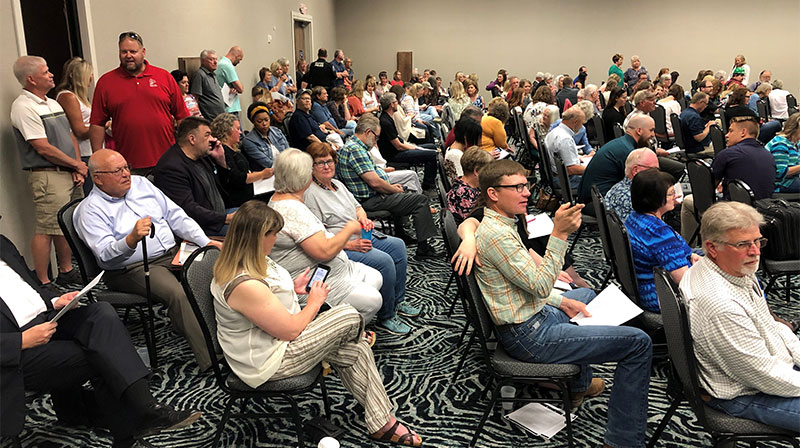 Over 400 parents (and grandparents) filled the State Board of Education meeting held in Kearney, NE on June 4 to testify against the proposed "health" curriculum.

There was a great victory in Nebraska recently!

A proposed Nebraska K-12 public school “health” curriculum that included an outrageous array of topics was derailed. It had faced early criticism by the Governor and other politicians. But then came months of heavy pressure from parents across the state, spearheaded by the Nebraska’s MassResistance affiliate group. As a result, the State Board of Education tried modifying the proposed curriculum, then voted to table it indefinitely.

Nebraskans for Founders’ Values (NFFB), one of Nebraska’s pre-eminent pro-family groups, has been a MassResistance affiliate since 2016 – when they took on the Omaha School Board over imposing pro-transgender policies and radical sex-ed curriculum on the city’s students.

But their greatest successes have been statewide, getting pro-family bills passed and bad bills stopped in the State House. NFFB’s organizing experience includes holding training workshops across Nebraska for pro-family activists.

The big push gets started

Unlike many states, Nebraska does not currently have a statewide K-12 “health” curriculum. This past year, the leftists and sexual radicals in the state’s Department of Education (DOE) were hoping to change that. A special DOE committee was formed to draft the new curriculum. The State Board of Education – eight members elected from districts across the state – were all leftist Democrats (a testament to voters not paying attention) and were eager to approve the curriculum. This was a freight train ready to go!

There is a very disturbing new trend in statewide “health” curricula for public school students, especially in relatively conservative states like Nebraska.

Under the banner of “health,” the left-wing bureaucrats deceptively weave in a range of odious topics. These include comprehensive sexuality and birth control, normalization of homosexuality and transgenderism (“gender identity), “Diversity and Inclusion,” and “Social Emotional Learning” (SEL).

“Diversity and Inclusion” is a deceptive term for Critical Race Theory (as well as LGBT issues). “Social Emotional Learning” is less well-known but extremely intrusive and ominous. (See here and here.) Starting in Kindergarten and continuing through all the grades, SEL seeks to mold children’s thinking processes and values away from how parents might teach them into politically correct and non-individualistic approaches to everyday life situations.

On March 11, 2021, the State Board of Education unveiled the new 60-page proposed K-12 “health” curriculum. It was comprehensive – and alarming.

The outrage by parents across the state was swift. One week later, NFFV released a five-page list of the obvious “red flags” in that document.

NFFV began spreading the word and meeting with parents across the state. At one NFFV workshop, parents met with Mark Bonkiewicz, the NFFV leader, to ask what they could do. Mark worked closely with them to form Protect Nebraska Children Coalition (PNCC), a group specifically focused on organizing parents on this issue.

Protect Nebraska Children Coalition gathered over 20,000 Facebook members in four short months. Together with NFFV, they became a major force in the battle!

The Nebraska State Board of Education meets every month except July. In addition to meeting in Lincoln (the state capital), they meet in towns across the state. NFFV and Protect Nebraska Children Coalition made sure that large numbers of parents (and grandparents) came to every meeting to testify. Not surprisingly, LGBT groups – which have long pushed the normalization of their behavior on children – also came to testify for the curriculum.

In May, the Governor weighed in against the standards by holding a few Town Hall meetings around the state. And the controversy was getting media coverage. It was also discovered that the curriculum document had lifted exact phrases and guidelines from SIECUS, one of the most radical far-left “sex-ed” groups in the country.

At every State Board of Education meeting the parents continued to be relentless!

A second draft is presented

The Board members were clearly feeling the pressure, so they instructed the DOE to prepare a new version of the curriculum that presumably would be less controversial.

On July 27, the second draft of the curriculum was unveiled. It was a watered-down version of the first draft, but it was still bad.

Within days, Protect Nebraska Children Coalition published a document outlining the problems in the second version. In addition to inappropriate sexuality and LGBT issues, the entrée for SEL, Critical Race Theory, and other Marxist ideology was obviously still included.

It was clear that the second draft was not going to placate parents. The pro-family forces kept up their pressure. 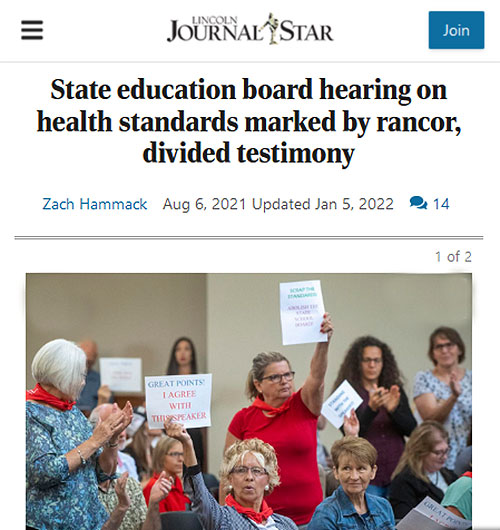 Media coverage of the outrage against the second draft of the "health" curriculum, at Aug. 6 meeting of the State Board of Education in Lincoln, NE.

Board of Education finally backs down

The State Board of Education wanted to pass this. But on Sept. 3, they’d had enough. They voted overwhelmingly (6 yes, 1 abstention, 1 absent) to table the “health” standards. The Governor was very pleased – as were parents and grandparents across the state! 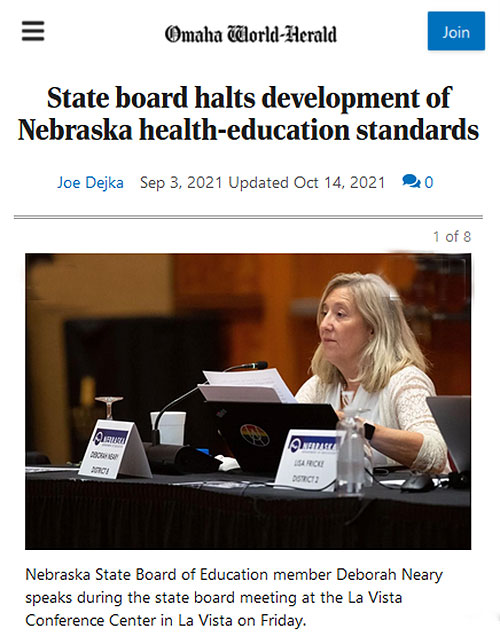 Media coverage of Sept. 3 meeting of State Board of Education in La Vista, NE.

NFFV is certainly not stopping, of course. Since the tabling of the measure is technically temporary, Mark Bonkiewicz has told us that they will continue to go to every Board meeting and testify – until the State Board of Education votes to permanently scrap these “health” standards.

A Board member resigns - and is replaced

On October 8, one of the Board members formally resigned (citing health reasons). We suspect that the outrage directed at the Board had something to do with it. The Governor appointed a conservative Republican on December 24 to take her place! Mark has talked with this new member and is very positive about him.

This is what pro-family people can do if they are organized, resolute, and unafraid. NFFV is moving forward this year with legislation to take on the repeal of the obscenity exemption for schools and libraries and other much needed changes in state statutes. 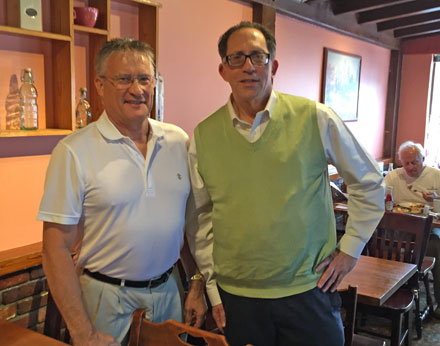 Mark Bonkiewicz, leader of Nebraskans for Founders' Values (left) with Brian Camenker of MassResistance, meeting in 2016 to discuss strategy.