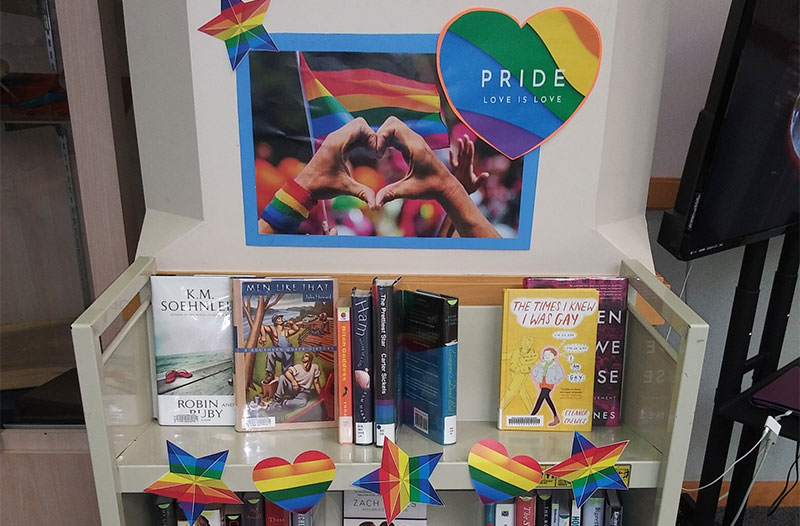 One of several Citrus County library displays last year: What were they really promoting?

We’re seeing it more and more: Shocking “culture war” battles are being waged even in conservative areas.

Citrus County, Florida, located on the west coast about half-way between Tampa and Gainesville, is one of the most conservative Christian areas of the state. The county voted 70% for Donald Trump in 2020.

But most people don’t pay close attention to local elections, such as for county commission. For those local offices, leftists often run as Republicans - and the effects can be terrible. Adding to that, the LGBT movement is pushing hard in conservative areas. So local citizen groups need to be on the alert, stand up, and fight back. MassResistance is often called to help.

“Pride” displays come to the library

Last June, two of the five Citrus County Library branches shocked the community by putting up homosexual “Pride” displays. A lot of people were outraged that their tax dollars were subsidizing that perverse sexual agenda. They wanted to stop it from happening again this June. Little did they know how big a fight it would be! 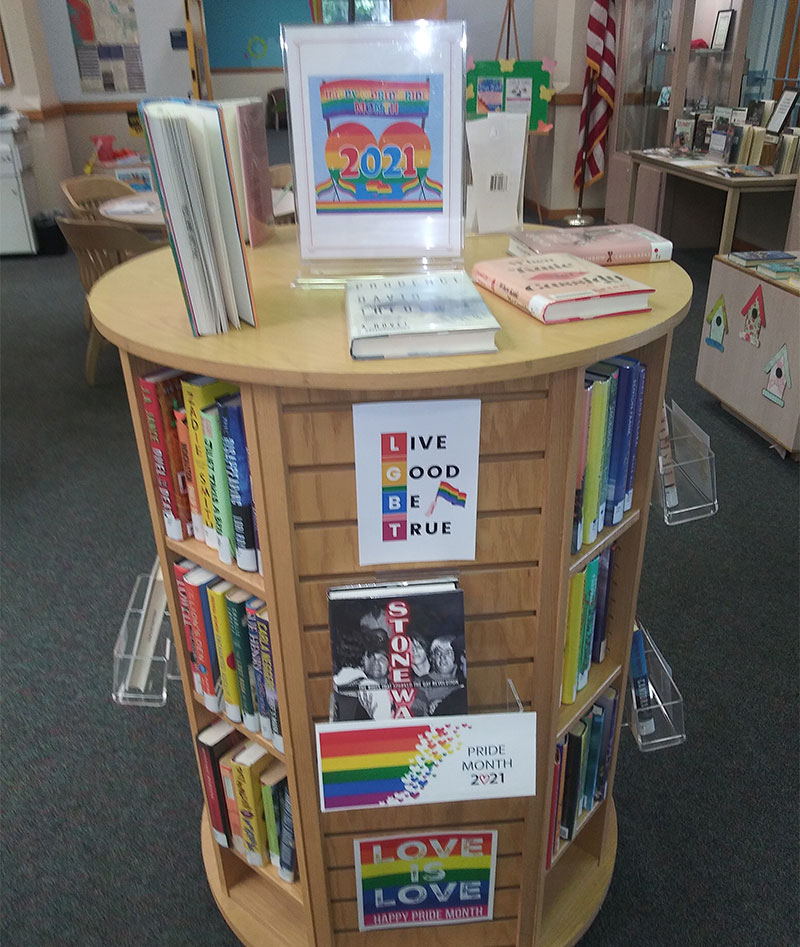 As children came into the library, this is what greeted them during "Pride Month."

Citrus County has a nine-member Library Advisory Board (LAB), appointed by the five-member County Commission. But the County Commission effectively controls the library. Although there was intense community opposition to the Pride Month displays, county employees had insisted the displays would continue despite the many complaints.

A great local activist, John Labriola, began organizing dozens of people to attend County Commission meetings to demand that future library “Pride” displays be canceled. Those numbers swelled over time as his group reached out to local pastors and congregations. John also chronicled the events on his Citrus Crusader blog.

But a smaller number of angry LGBT activists also began attending commission meetings, insisting that the library system had a duty to support the LGBT lifestyle in the community.

After months of pro-family pressure, the County Commission chairman put the issue on the Jan. 4, 2022 Commission meeting agenda and made a motion to prohibit the displays. Before the vote, dozens of people testified about the dangers of homosexuality. There were heartbreaking stories of how the LGBT lifestyle had harmed their children. 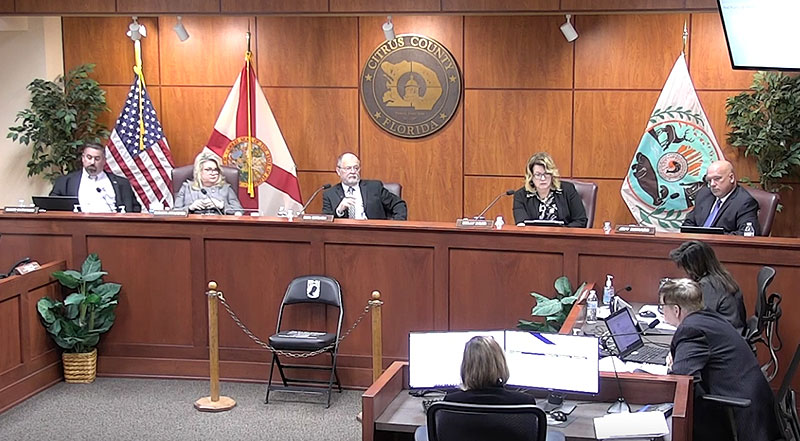 It looked like the prohibition would pass. But at the last minute, one Commissioner flipped his vote, and the motion was defeated, 3-2.

John immediately began gathering signatures in the community against the Commission’s decision. In some local churches, pastors announced it from the pulpit. The petition eventually had nearly 1,000 names.

MassResistance gets called in to help

Enter Bonnie, a seasonal Citrus County resident and MassResistance activist in her native New England for over 20 years. In mid-January, Bonnie and John asked us to help them fight this battle. Arthur Schaper, our National Organization Director, began working with them on organization, strategy, and tactics.

As John said, “Becoming an affiliate with MassResistance has really helped us make an impact.”

After the Jan. 4 County Commission meeting, several residents decided to apply for the five Library Board seats that were expiring at the end of that month. They were told that the application period was closed. However, when pressured, the County Administrator admitted that the positions had never been announced or advertised, as the county normally did with every other county Board.

The County Administrator agreed to reopen the application period and advertise it. But at the Feb. 8 Commission meeting, the County Attorney said that the positions could not be advertised because the Library Board had lifetime appointments!

Lifetime appointments? It turns out this came from the County Attorney’s and County Commission’s shady interpretation of the regulation, which only states that members with expiring terms are "eligible for reappointment," not automatically reappointed if they wish to remain.

People were outraged. So on March 8, the County Commission agreed to re-open the Library Board application period and advertise it. Over three dozen local people have applied for the five seats! The County Commission will decide on which applicants to appoint during their April 26 meeting.

On March 22, dozens of residents showed up at the Library Advisory Board meeting to demand that they take action on the Pride displays, since the County Commission had deferred that issue to the Board. 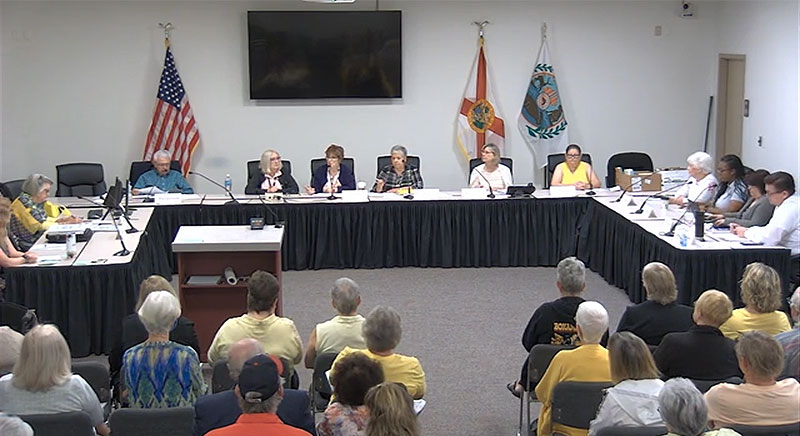 Pro-family residents - and some LGBT activists - packed the Library Advisory Board meeting on March 22.

But a number of pro-LGBT people also came to testify in favor of exposing children to the homosexual agenda. They were particularly vicious against people’s religious beliefs on the issue. One man, who described himself as a gay former educator, was adamant that children need “information” in their public libraries about LGBT behaviors, complaining that schools were now off-limits because of Florida’s new Parental Rights in Education Act (which bans LGBT grooming of children in grades K through 3). 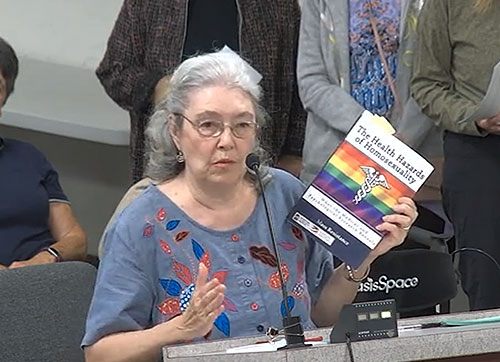 This woman brought our MassResistance book "The Health Hazards of Homosexuality" - and asked why the library isn't giving kids that information instead of promoting the LGBT lifestyle! 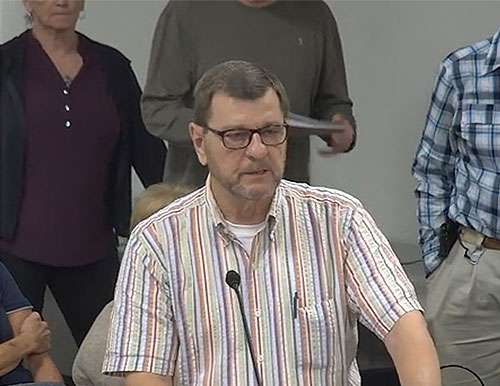 This "gay former educator" insisted that children need to be supported in their LGBT behaviors.

John also delivered his petition with 800 names of local citizens who were against the display.

But not surprisingly, the leftist-dominated Library Advisory Board voted 7-2 to keep the “Gay Pride Month” displays in the Citrus County Libraries.

Library Director caves in: No plans for Pride Month display this year

But the pressure from our side made a difference!

On April 6, the Citrus County Library Director announced to the local media that he has “no plans to put up an LGBTQ Pride Month display this June.”

He said that this decision “allows for a cooling off period while emotions are running hot in the community” and that he “doesn’t want to add more fuel to an already incendiary issue.” 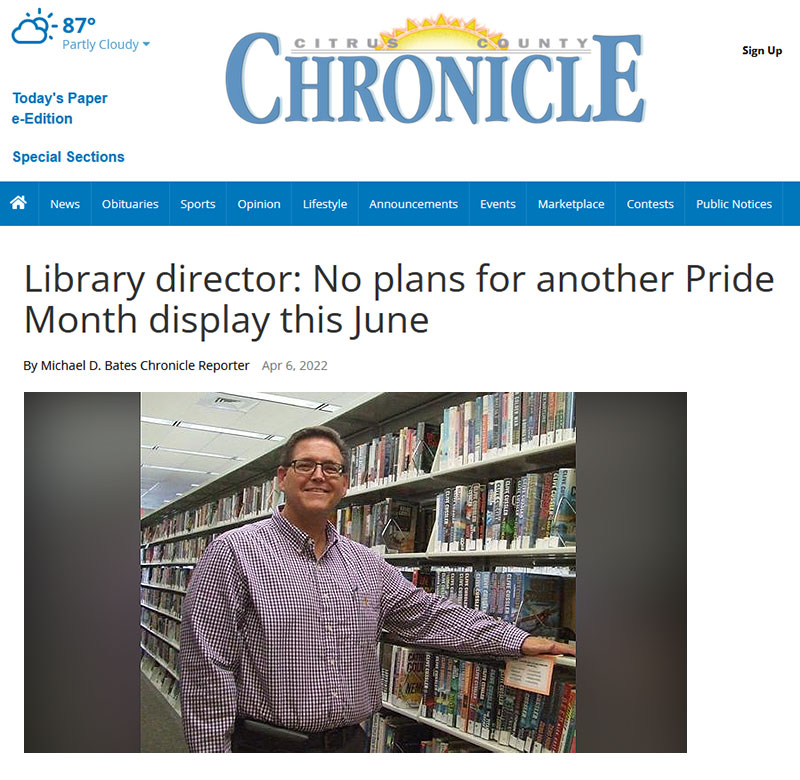 Coverage in the local newspaper.

The momentum is with us. The next step is to make sure that this display never comes back!

People need to pay attention to everyone they are voting for, not just the top of the ticket. Across the country, stealth leftists have been getting elected to local positions, causing havoc.

Also, as John warns, the LGBT movement is incredibly wealthy and aggressive. They organize and work their way into virtually every library and school across America. Children are at stake. The average person needs to be willing to take a stand.