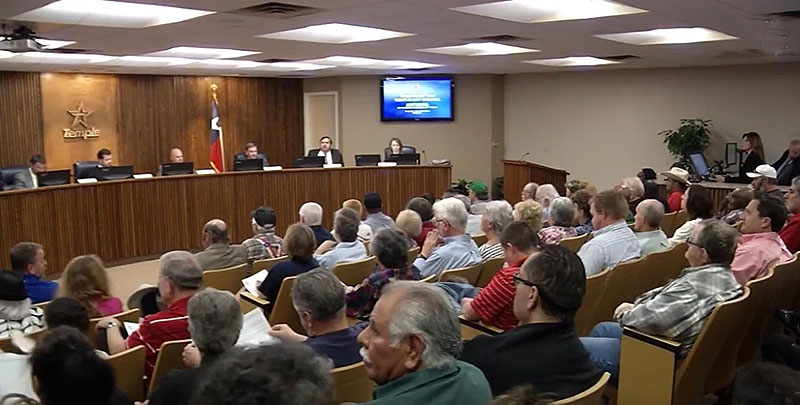 Across the country – even in conservative areas – newly “woke” city officials are racing to prove how “accepting” they are by putting into place all-encompassing Diversity, Equity, and Inclusion” (DEI) programs. This radical Marxist agenda seeks to indoctrinate employees away from their Christian beliefs and change city government and the community. And officials are willing to deceive and mislead the public to accomplish this.

But in Temple, Texas, our MassResistance affiliate Concerned Christian Citizens, has successfully organized local citizens to stand up and confront their public officials to stop it!

Photo at right is from the Concerned Christian Citizens' 2017 pro-family conference.

In our previous post we reported on the initial victory. The Mayor, City Council, and City Manager had covertly decided to hire the Nova Collective, a radical pro-LGBT Diversity, Equity, and Inclusion (DEI) company from Chicago, to come in and transform the city government.

The City Council had recently created the Temple Diversity, Equity, and Inclusion Commission – which was basically meant to serve as a front group for the city’s DEI agenda. Thus, at its June 7 meeting the DEI Commission was slated to vote to officially recommend Nova. From there, the City Council would hire Nova and get the program rolling.

But the Texas MassResistance outrage at that DEI Commission meeting (and leading up to it) was so intense that the Commission instead decided to table the vote indefinitely. Stalling it certainly sent a message to the other public officials!

City employees thank MassResistance for fighting for them

As the news about the true nature of DEI and the radical Nova organization became known, Temple city employees became very concerned and alarmed. Several of them secretly contacted Concerned Christian Citizens (our MassResistance affiliate) to thank them for fighting on their behalf and encourage them to continue.

Here are some excerpts from those emails:

Please continue to help those of us employees who are most affected and who cannot speak up about this for fear we will be disciplined in some way. We are praying you will prevail in getting city leadership to hear the truth about this. My feeling is they do not understand what the issues really are, and many seem to think this is a warm fuzzy kumbaya type of inclusive effort that no rational person could possibly oppose. What they are missing is that these consultants are going to target Christians for their faith because of course, the LGBT etc agenda runs directly opposing what God says. Does that mean we don’t serve everyone equally? No. What it means is this is an attempt to force staff to affirm, support and celebrate what we know is wrong, contrary to what God says.
Thank you and God Bless you all,
[Anonymous] Temple city employee


I read the Mass Resistance piece and listened to the July 7th Council meeting and was unaware of the issue until then. The mayor tried to throw employees under the bus to get you to sit down by saying it isn’t about you citizens, just employees, implying we somehow didn’t count for concern. He said we should be no concern of yours and employees just needed training to act properly toward a diverse public. Thank the Lord you all did not sit down but came back even stronger the following meeting!!


We do not have any issues that I have heard treating people well and equitably. It is madness. I do not know if city leadership and City Council have the slightest idea how radical this is.


We do not want to have to decide between our jobs and our faith but fear that this is the direction we are moving to. Once hired, the consultants will form surveys, small groups and require employees to affirm and even celebrate sinful practices against God’s Word and Marxist ideas counter to our nation’s ideas.

In many ways, city employees were more alarmed than our local activists.

The city officials were adamant about bringing in Nova. It quickly became obvious that the Mayor and City Council intended go ahead and hire them anyway, despite the rejection from the city’s DEI Commission.

So the activists turned their outrage toward the Mayor and City Council. Dozens of citizens came to testify at the July 7 and July 21 City Council meetings. They also contacted them by phone and email. Groups met in the evenings at various homes. They were relentless!

The pressure worked! On July 30, the Mayor and City Administrator released a one-page letter to the Temple community. [LINK] It said that the city will not move forward with the proposed contract with Nova. The Mayor also telephoned the leader of Concerned Christian Citizens and personally emailed it to him. 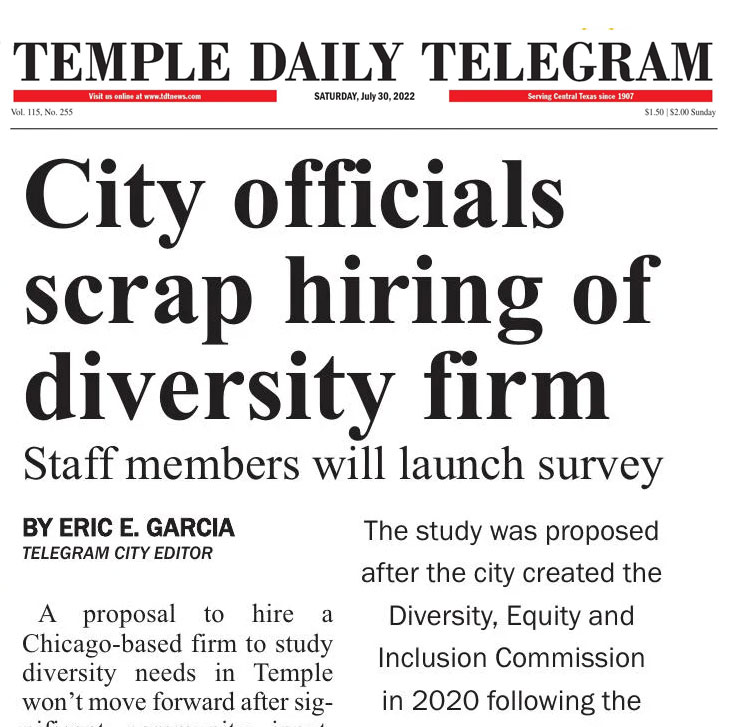 This came out hours after the Mayor's letter was released.

This is a great victory! Despite the strong wishes of the top city officials, the Nova Collective is not coming to Temple, Texas.

Nova reacts to decision by attacking the local citizens

Reacting to the decision, the Nova people revealed how noxious they really are – and how amateurish and incompetent this selection by the Mayor and City Manager was for the city.

Right after the Mayor's letter was released, Nova lashed out at the local residents.

In an email sent to the Temple Daily Telegram newspaper, Brynne Hovde, a partner in the Nova Collective, lashed out at the local citizens. Addressing them directly, she labeled their concerns as “hate and fear” and insulted their religious stand:

You fear change, but you must know that God is Change. And God is Love. No amount of pitchforks can stand in the way of that. All of the hate and fear that has been espoused during this process only produces one reaction for us: profound sadness.

Hovde went on to rant, “…to the LGBTQ+ community in Temple, Tx: We love you more than they can ever hate you.”

This shows that the citizens were completely correct in their assessment: Nova not only sought to push an extreme radical agenda on the city, but they harbor a deep personal hatred for those who express any disagreement with them, particularly if grounded in Christian belief.

Nova’s far-left agenda was not hidden. The Telegram article noted that Nova’s website and Facebook posts revealed their far-left orientation: They blasted the U.S. Supreme Court decision reversing the Roe v. Wade abortion case; they recognize multiple gender identities; they advocate making “this the month to get intersectional” (i.e., honoring divisive “identities”); and they promote transsexual bathroom use. In addition, their social media promoted Drag Queens and “National [LGBT] Coming Out Day.” All of this was obviously included in their broad definition of “Diversity, Equity, and Inclusion.”

Coming up: The final battle over DEI

Unfortunately, the fight is not yet over. The city officials still don’t get it. The city officials are still intending to push DEI in Temple. The letter from the Mayor and the City Administrator states that although the city is not hiring Nova, they are going to work to accomplish the same “DEI effort” using their own staff and local “community members.”

Staff's initial recommendation to contract with the Nova Collective was intended to assist the City with developing an internal DEI effort. The City has received a broad array of community feedback regarding the contractor, its social media content, and the proposed contract price.

We have listened to the feedback from the community regarding the proposal. We believe that the same goal can be accomplished by our own City staff and community members and that retaining the services of an outside consultant will not be needed. As such, the City of Temple will not move forward with the proposed contract.

The City Manager has told a local newspaper that the city will begin their DEI process (exactly as Nova was proposing) by conducting a survey of Temple employees and look at existing practices to help the city determine if there are any “unintended barriers to various diverse groups in Temple.”

The fight now is to force the city officials to abandon their DEI lunacy entirely. Is DEI needed at all in Temple? In fact, no one has presented any actual evidence, only feel-good sloganeering. In particular, this agenda is being pushed by the “woke” City Manager and the city’s so-called Director of Performance Excellence. Many in town are beginning to demand that these two be replaced.

The Temple residents see through that sham. And as one testified at the July 21 City Council meeting:

I grew up in New York and I moved here from California. The last thing I want to see is this poison infecting Texas. DEI only divides and it doesn’t unite. It lowers the bar for achievement. It does so many negative things. It’s a socialist infiltration.

The Mayor is not prepared to give up easily. The Temple DEI Commission was scheduled to meet on August 2. We were told that one of the Commission members had put on the meeting’s agenda an alternative to Nova and DEI that was faith-based.

But the week before the meeting, the members were notified that the Mayor had stepped in and cancelled it. When they looked up the agenda for that meeting, this is what they saw: 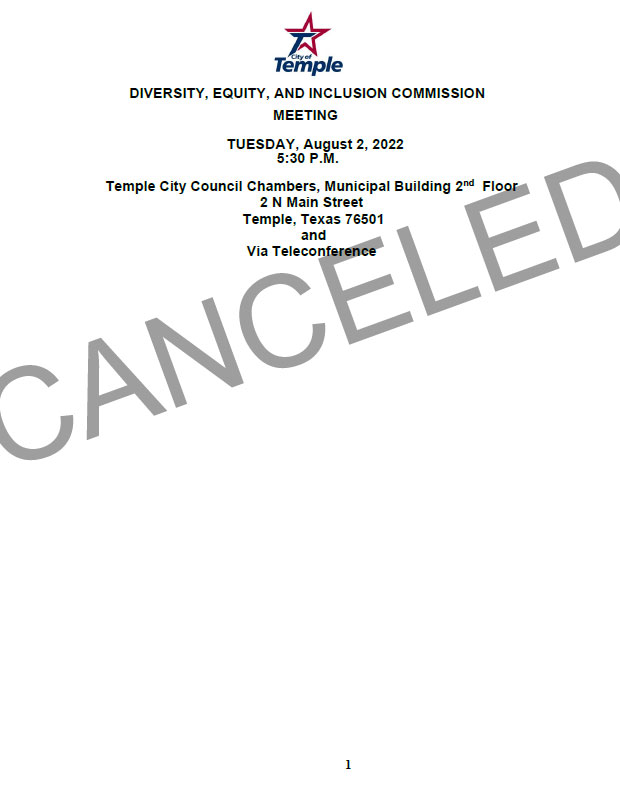 The Mayor’s canceling of the Aug. 2 DEI Commission meeting did not stop the momentum.

Local activists, including one of the DEI Commission members, came that day and held a demonstration and prayer vigil outside of City Hall. It was a great event that drew over 50 people. The people had intended to be at the meeting to testify. They were demanding that a local faith-based organization be considered as an alternative. The Mayor had obviously hoped to silence them by canceling the meeting. 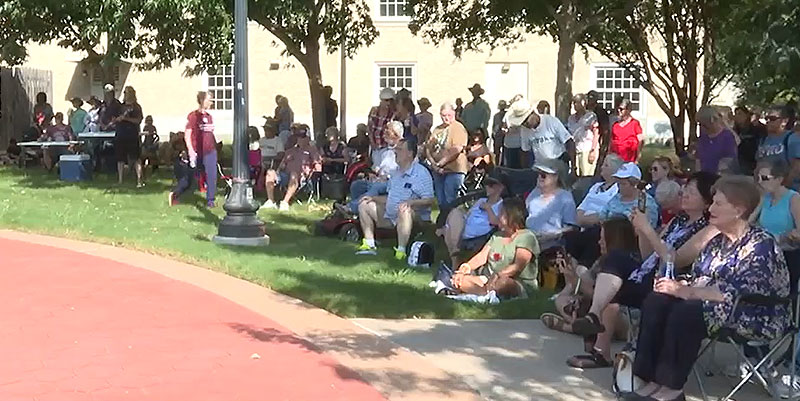 They weren't able to testify before the DEI Commission, but they came to City Hall anyway!

It even made the local TV news: 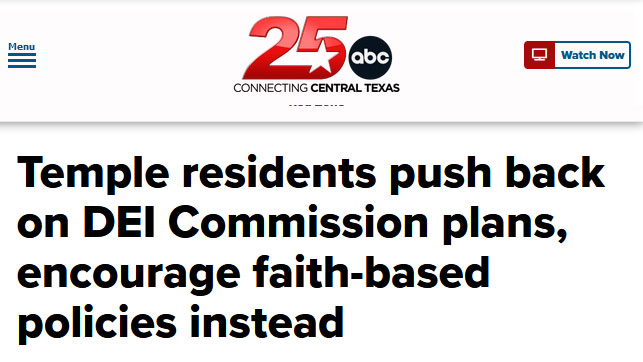 We were also told that city officials are interviewing a person to be chairman of the DEI Commission who will be a paid city staffer. This is a means for the Mayor to control the Commission directly. And it would add another unnecessary bureaucrat to feed on taxpayers’ money.

In today’s unhinged world, public officials have become more out of touch and disconnected than ever from ordinary citizens. Being in power brings out bad traits even in the best of times. More than ever before, it is necessary for good people to stand up for their liberties, to be absolutely persistent, and never give up.

MassResistance is working hard to make that happen in as many places as possible!