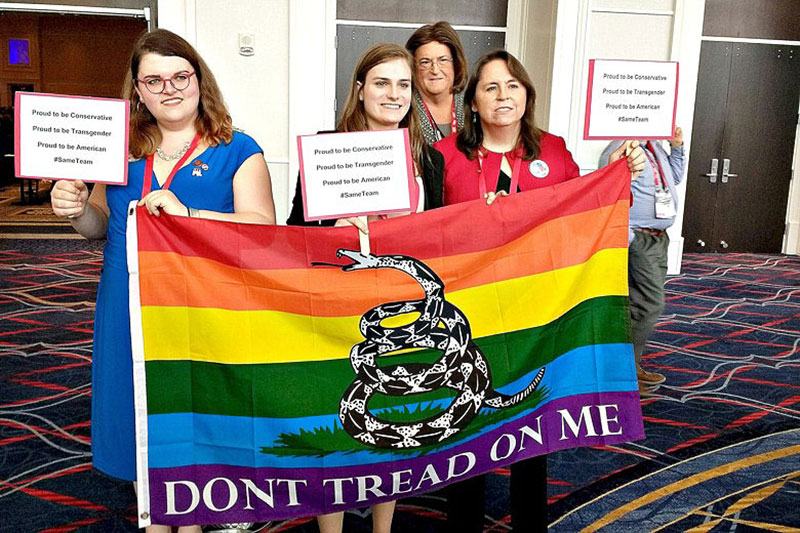 These four men dressed as women were quite prominent at CPAC 2018. Their signs say: "Proud to be conservative. Proud to be transgender. Proud to be American. #SameTeam." At the same event MassResistance was banned from having a table for being "transphobic." Other pro-familly groups boycotted it. [Photo: Slate]

[NOTE: A previous version of this article appeared in American Thinker.]

On Dec. 13, 2022, the occupant of the Oval Office signed into law the so-called “Respect for Marriage Act.” It repeals the 1996 Defense of Marriage Act and codifies same-sex “marriage” into federal law. It allows for Justice Department prosecution and private lawsuits against anyone who uses a state’s own laws to refuse to recognize same-sex marriages or carry out “any public act” pertaining to such marriages.

Its passage by Congress (with the help of numerous “moderate” Republicans) has been bewailed by conservative groups. But let’s not fool ourselves. This didn’t happen because of some weak-kneed RINOs. It’s the result of a near-total capitulation of the conservative movement on the marriage issue over recent decades, which has trickled up to Congress.

In the critical weeks before its final passage by the Senate followed by the House, major pro-family groups spent lots of money and energy lobbying tirelessly against it. These groups were at the same time polishing their image as stalwart defenders of the family (in their ongoing appeals for funding from conservative citizens).

The arguments that our side wouldn’t use

But with all that effort, here’s what Congress and the public did not hear from the mainstream conservatives as reasons to defeat the bill:

The wimpy political brainiacs on our side say that we need to sound moderate and reasonable. They constantly insist that telling these obvious truths will anger the leftists and therefore won’t help. They’re wrong. Boldly repeating these truths actually moves the whole political discourse to the right. Ignoring them has the opposite effect.

Let’s be honest. Conservative leaders don’t want to be called “bigots” in the mainstream media. And they don’t want to alienate the false Republicans who go along with same-sex marriage. They might want their votes on other bills – or their donations. 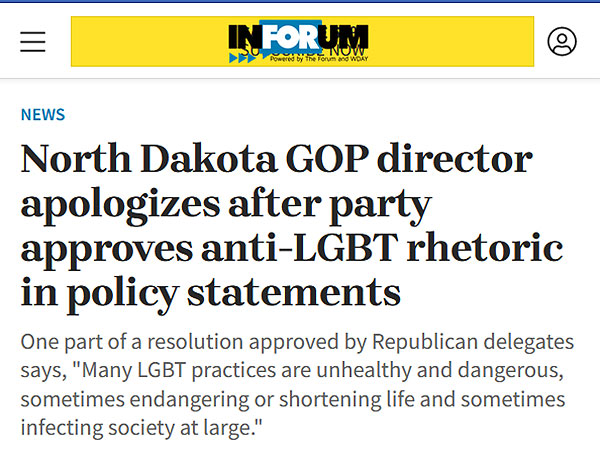 Rather than face the wrath of the liberal media, this state GOP leader apologized after the GOP delegates passed a resolution correctly describing LGBT practices as "unhealthy and dangerous."

So instead, there was really just one message from our side. It centered on “religious freedom.” It basically said: If you insist on passing this, there must be some religious freedom protections added. People with “sincerely held religious beliefs” against same-sex marriage need safeguards.

The obvious questions are: What about people who don’t have “sincerely held religious beliefs” but just think that same-sex marriage is disgusting, unhealthy, or destabilizing for society? And who gets to determine whether one’s beliefs are sufficiently “sincere?” Our side’s argument was weak as dishwater, and the leftists basically laughed at us.

Yes, it is true that religious liberty is in grave danger with this new law. On the surface, the text of the bill seems to include many protections. But in fact, there are numerous possible loopholes.

More importantly, our side’s complete willingness to concede the overall Orwellian codification of same-sex marriage into federal law while fighting the narrow “religious liberty” battle sent a clear message that we weren’t serious.

We can’t expect conservative members of Congress to boldly use the necessary arguments if the big money groups on our side are afraid to back them up. Make no mistake: If the tables had been turned, the Left would have thrown everything they could think of at us, and in as vicious a manner as they could muster.

Conservative grassroots activists may have strong feelings about this, but the mainstream conservative movement went south on the whole LGBT issue a long time ago.

CPAC (the huge "Conservative Political Action Conference") now has the Log Cabin Republicans as a sponsor, and tranny contingents are welcomed, but groups deemed “anti-gay” or “transphobic” are banned from having a table (as MassResistance was in 2018). Last year President Trump and GOP Chairman Ronna McDaniel hosted a gala event promoting the LGBT inclusion in the Republican Party.

Two days after the “Respect for Marriage” act was signed into law, President Trump held another gala event for homosexual Republicans. “We are fighting for the gay community, and we are fighting and fighting hard,” Trump told the crowd. “Conservative” stalwart Kari Lake of Arizona was also part of the festivities that night.

With that kind of capitulation on our side, it would have been a shock if we had won the vote on the “marriage” bill!

This misguided approach goes back many years. After same-sex marriage was first “legalized” by the Massachusetts Supreme Judicial Court in 2004 and there was a battle to get the Legislature to pass a state constitutional amendment to reverse that, the mantra by the big conservative groups was “every child needs a mother and a father” and “marriage is between one man and one woman.” They shied away from suggesting that same-sex marriage was simply a “lie” – physiologically and morally impossible.

The amendment sunk like a rock. The LGBT movement countered that with slick emotional arguments, howling that they were all “about “love” and “equality” – and we were simply “haters.” They said that they could make very “loving” parents and that everyone should have “marriage” rights.

When the same-sex marriage lawsuits began to move through the federal courts, our side repeated the refrain, “Children do best when raised by a mother and father” (which is technically true but less relevant in this fight). 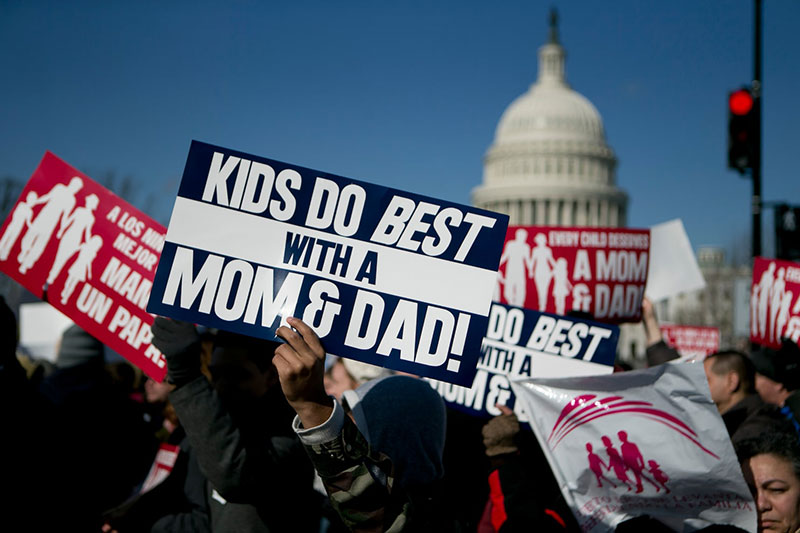 A pro-family march in Washington, DC prior to the Obergefell hearing. [Photo: Washington Post]

This mushy collection of arguments was used right up through the Obergefell case – and our side lost consistently. At one point during the Proposition 8 marriage lawsuit in California, the openly homosexual judge actually reprimanded our side for presenting such an inept case. It was embarrassing, but our people didn’t seem to care.

Our side must do what’s right!

In order to achieve their deranged agenda, the Left must lie about virtually everything. Our side has the truth, which is much more powerful – if we’re not afraid to use it. In our own activism, we have experienced that first-hand many times.

Unfortunately, as someone once observed, on cutting-edge culture war issues the mainstream conservative movement is continuously willing to settle for “defeat with dignity.” It is cowardly, dishonest, and doesn’t seem to bother them at all.

Boldly telling the truth works. Sadly, MassResistance is one of the few national groups willing to do it consistently and methodically – and we’re not stopping!