MassResistance worked with her and defended her against leftist attacks

Leftist City Council members and local LGBT activists tried to get flag taken down, but failed 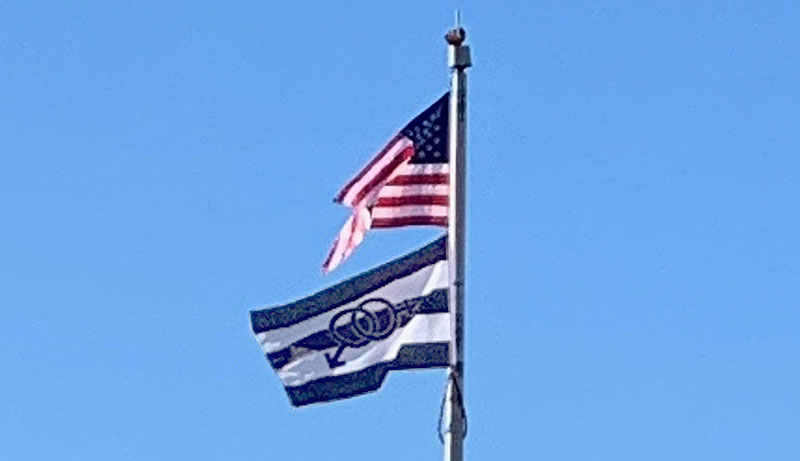 The "nuclear family" flag flew over the city of Fitchburg, Mass., for a week in the same place the rainbow flag had flown earlier.

When it comes to the concept of “inclusivity,” the LGBT movement is ruthlessly hypocritical: only their message may be included. But now people are pushing back.

In early November 2022, Jessica – a mother in Fitchburg, Massachusetts – contacted MassResistance. She wanted to discuss how to deal with the indoctrination in the schools and in the town, such as pride flags, Black Lives Matter signs, sexual curriculum and materials, and gender ideology propaganda. It appeared to her that much of this was in violation of the city’s own policies and various statutes regarding discrimination, sexual harassment, and bias.

Jessica has a lot of energy and passion to help make things right in her city. She’s really an inspiration in that regard. But she needed help. MassResistance began exploring ideas with her. We would talk on the phone or via email nearly every day, sometimes several times a day. In addition, we reached out to her group of local parents to support them.

Jessica got an idea that came to her from reading an article in a magazine about fairness and equal time for flags. She noticed that very year, the city flies the LGBT rainbow “pride” flag in a city park for a week. So, it would only be fair that they also fly a “nuclear family” flag there for a week. There must be equal representation, she reasoned.

So Jessica spoke with Fitchburg Mayor Stephen DeNatale. She explained to him that the non-discrimination laws required that both sides of an issue be allowed. She also reminded the mayor that his oath of office requires him to be “impartial” toward the citizens of Fitchburg. There is also the recent 9-0 US Supreme Court decision, Shurtleff v. City of Boston, requiring Boston to be impartial in allowing flags. Thus, the nuclear family flag should also be allowed to fly for a week in the same location in Fitchburg.

Surprisingly, the Mayor was very supportive of the idea. He agreed that if one group in the community was represented, other members of the community should also be represented. It was determined that the nuclear family flag would be raised in the city’s Riverfront Park on Dec. 21 and fly there until Dec. 28.

Jessica decided to invite all the local churches to attend the flag-raising. But after she contacted one church and was rather rudely turned down, MassResistance agreed to contact the other churches for her. Of about a dozen churches, all but one either refused to attend or did not respond. The one church that supported the idea said that they had a conflict that day and couldn’t come. So Jessica decided to attend the flag raising with a few friends.

On December 21, 2022, Jessica and Mayor Stephen DeNatale raised the nuclear family flag over the city’s Riverfront Park. The mayor later posted a photo from the flag-raising ceremony on Facebook. 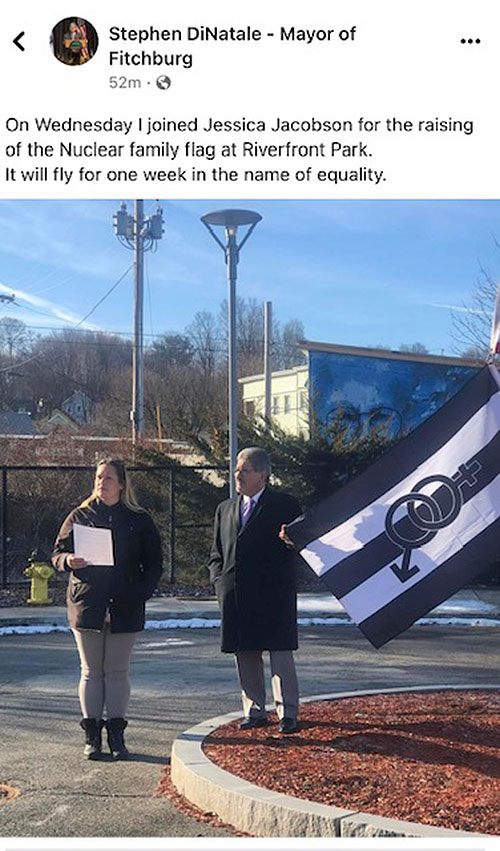 At the ceremony, the mayor told the parents:

We’re trying to be as inclusive as we can. The City of Fitchburg has always been a tapestry: many colors, many creeds, many races, and we try to be as participatory as we can. Let's hope that our nuclear families are stronger than ever and continue to grow.

Jessica (with some help from MassResistance) also composed a one-page statement, “Equality is what this flag raising is all about.” It describes what support for the nuclear family means, the demands for equal representation, and how churches are encouraged to pray for nuclear families in these troubled times. 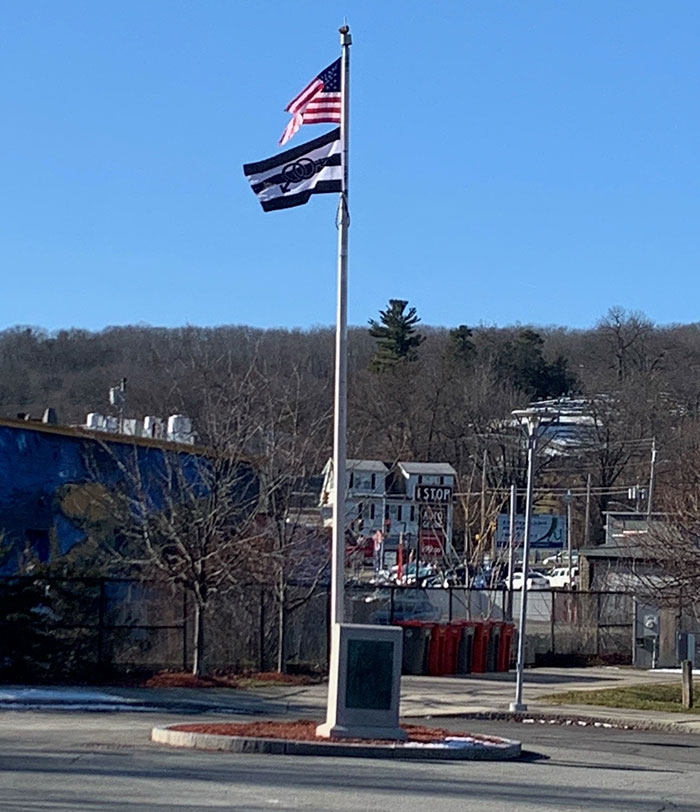 Within a day, pro-LGBT members of the Fitchburg City Council and a rabble of weird local leftists began viciously attacking the mayor on social media, and via emails and phone messages.

They were using their usual nasty, irrational tactics. The mayor was angrily accused of “homophobia,” “bigotry,” and “inequality” – and told that the pro-family position “does not deserve” to be recognized! The rainbow flag represents “inclusivity,” they said. And it is “incorrect and insensitive” to allow both flags and their ideas to be given the same legitimacy. Here's one City Councilor's anti-flag post.

On Dec. 23, Jessica called us to sadly say that the mayor had decided to take down the flag. He had just published a Facebook post basically apologizing to the leftist mob: 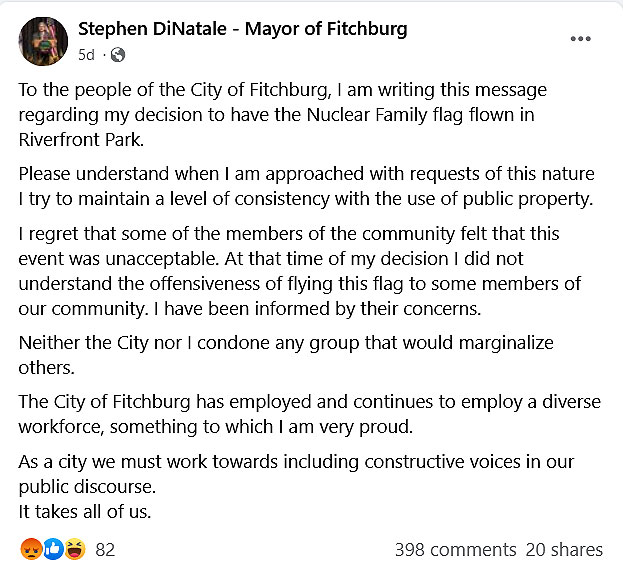 MassResistance jumps into the fight – Mayor keeps the flag up!

MassResistance sprang into action. We contacted the mayor and strongly pointed out how he was right to begin with, and that he must represent everyone and not cave in to the insulting and unhinged attacks. And that the Shurtleff case would surely be used against the city if they reversed their decision.

In addition, we organized an effort to defend the mayor and Jessica by confronting their attackers’ ludicrous arguments just as hard in social media, emails, etc.

And it worked. The mayor held firm. The flag stayed up!

The rabid LGBT activists in Fitchburg couldn’t just wait until the flag’s allotted week was over. They apparently sent out a press release to the liberal media to get publicity for this “injustice” targeting them. And sure enough, Boston NBC 10 TV News broadcast a report the night before the flag was to be taken down.

They interviewed MassResistance but didn’t use it in their report – presumably because our Organization Director, Karen, did an excellent job defending the pro-family position. Among other things, she asked, “What is hateful about being fair?”

This was a great start in a small, fairly liberal city. And next time it will be bigger. And we’ll make sure it spreads to more places!

The LGBT propaganda machine, like most of modern progressivism, is held up largely by a lot of money – and a minority of angry, dysfunctional people in all walks of life that the Left has tirelessly engaged for their cause. We certainly saw that in Fitchburg, Massachusetts.

It often only takes just a few ordinary people who are not cowards to start making a difference. MassResistance will be there to help make it happen!