LGBT machine went after him, but we came to his rescue.

(Also - City Council is presented a copy of our LGBT health book!) 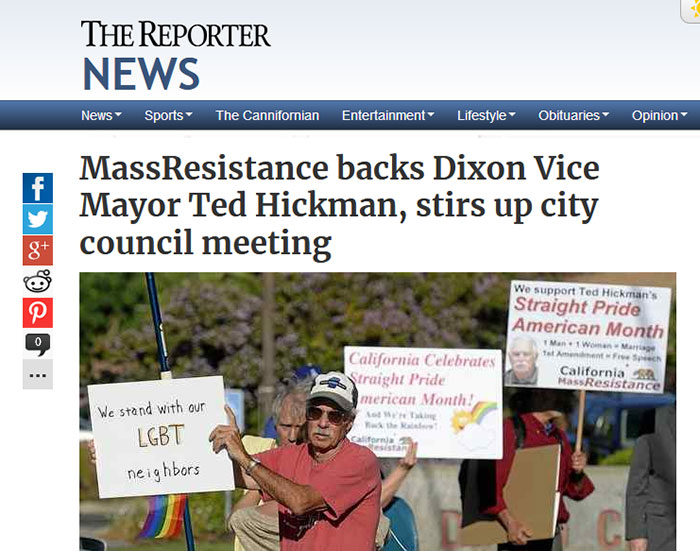 The LGBT “hate” machine routinely tries to destroy any public official who crosses them. But this time it didn’t work. In Dixon, a town in northern California, California MassResistance stepped in to stop them.

Ted Hickman, the Vice-Mayor of Dixon, CA, a town of 18,300 people, has always been a bold thinker. He served 12 years on the City Council starting in 1968. He became a reporter for the local Independent Voice newspaper and exposed a lot of embarrassing political shenanigans. He got elected for another 4-year term in 2014 without taking any political contributions, despite a crowded field, and then he became Vice-Mayor. 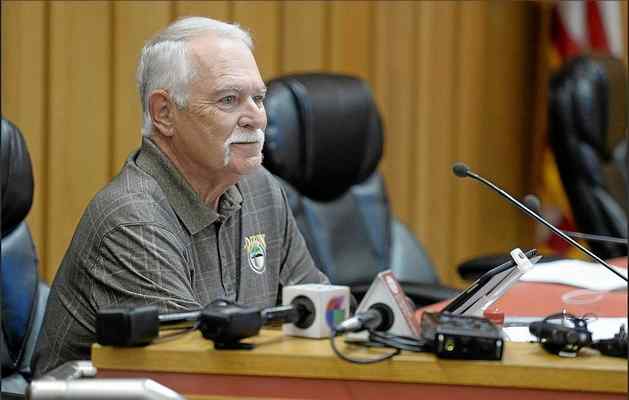 On June 29, Hickman wrote a small opinion piece in the newspaper and also on his blog. He said that since June was Gay Pride month, he was personally declaring July to be “Straight Pride American Month.”  He said that it’s “not really legally anti anything; instead it’s pro-families.”

“We work, have families, (and babies we make) enjoy and love the company (and marriage) of the opposite sex and don’t flaunt our differences dressing up like faries and prancing by the thousands in a parade in nearby San Francisco to be televised all over the world.”

You can the entire column HERE. He was basically saying lot of things that the average person has observed for quite a while.

The California LGBT “hate” machine went ballistic. They didn’t claim that his observations were completely wrong. Their stock position is that any such criticism constitutes “spewing hatred” – and any perpetrator must be taken down.

They organized a “recall Ted Hickman” campaign and a nationwide petition that claimed Hickman was “putting people’s lives at risk.” There were vicious attacks against the publisher of the Independent Voice newspaper. They got the mayor of nearby Sacramento, the state capital, to call for Hickman’s resignation.

They used their well-oiled connections in the media to make it a huge news story (i.e., fake news). On July 2 the local CBS-TV station did a report on the “backlash.” Even the Washington Post published an article about this small article in a rural town newspaper.

At the July 10 Dixon City Council, over 200 animated pro-LGBT activists swarmed the chambers. According to reports, many of these came from across California. At the meeting, they demanded that Hickman resign and that the City Council at least pass a resolution stripping him of his Vice-Mayor title. Only one person showed to speak in support of Hickman.

The Council said it would make a decision at the next meeting, on July 24. Hickman indicated he would not resign.

Arthur Schaper, director of California MassResistance (and also our national Organizing Director) knew that Hickman had a lot of support in the Dixon area, but that people on our side were intimidated and disorganized. 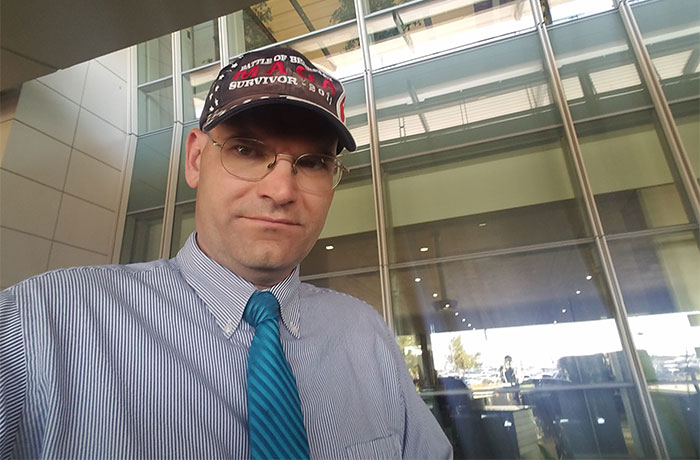 Arthur got right to work contacting MassResistance supporters and other conservatives in that area. He found that people were very enthusiastic about coming to Hickman’s aid and were willing to come to the July 24 City Council meeting, protest in the streets, and do anything else necessary. The momentum began to build.

Arthur decided to be right up front about this grassroots effort. He sent a press release to the local media letting them know that we were going to be there! Not surprisingly, the media was fairly hysterical that an organized group would openly counter the Left and the LGBT lobby in California. The media tried to attack MassResistance, but that tired tactic against conservatives has lost a lot of its luster.

Confronting the officials at the July 24 meeting!

In the days leading up to the July 24 City Council meeting, MassResistance helped local residents make it clear that they would not stand for any attempt to strip Ted Hickman from his Vice-Mayor position or remove any of his powers or duties.

Although all five council members are Republicans, Hickman is the only actual conservative (non-RINO) among them. Most of the rest would be Democrats anywhere else, and have no trouble aligning with the LGBT lobby. Moreover, they’ve never liked Hickman because of his anti-corruption push as a reporter. 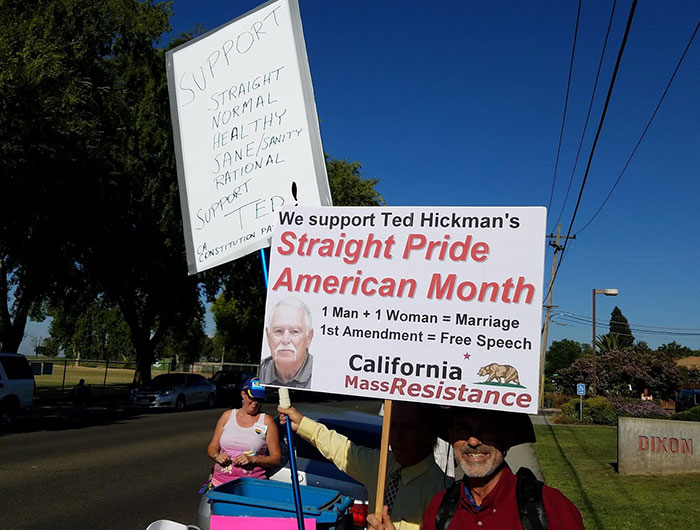 Outside the Dixon City Council. If you were coming to this meeting, you know where we stand!

Inside, the pro-family people and pro-LGBT people were about equal in number. But this time the pro-family people were considerably more emotional and animated – and very determined not to be trampled on by a perverse, well-funded special interest. As they testified, they were extremely vocal about the outrage of persecuting Hickman for simply making a common observation. 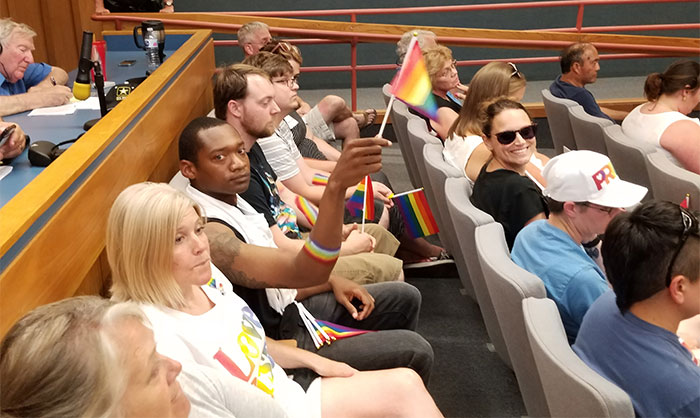 This time the gays were relatively subdued, for some reason! 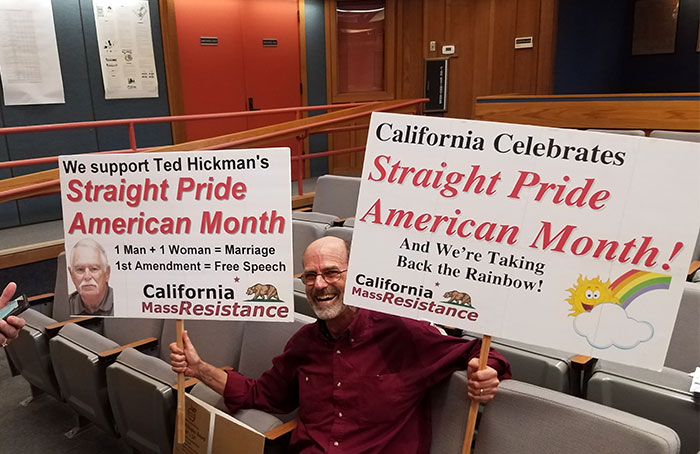 Thanks to California MassResistance, conservatives weren't afraid to speak up!

The LGBT lobby had been particularly incensed about Hickman’s description of the “gay pride” marchers as “faries”. So, Randy Thomasson of Save California came and presented the Council with photos from the recent San Francisco parade which proved the point! 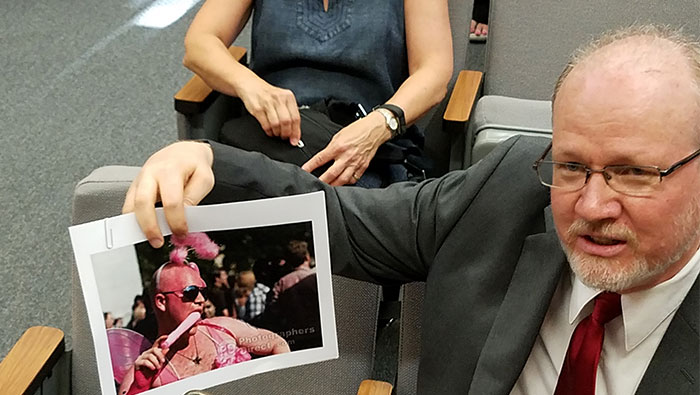 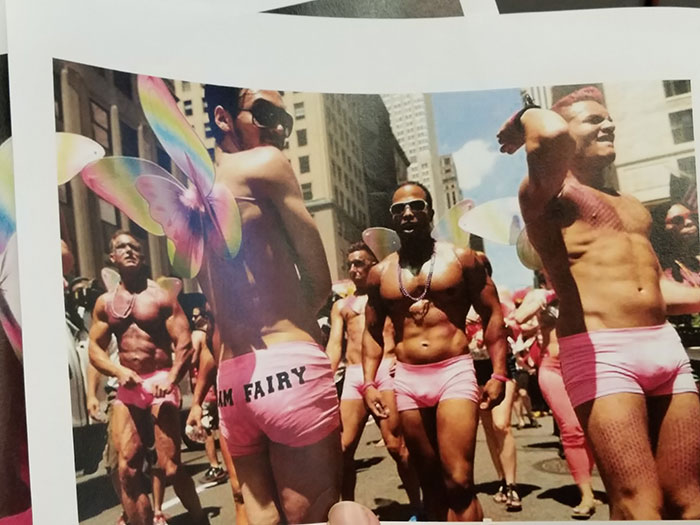 Hickman was pretty much on the mark, as the photo shows. 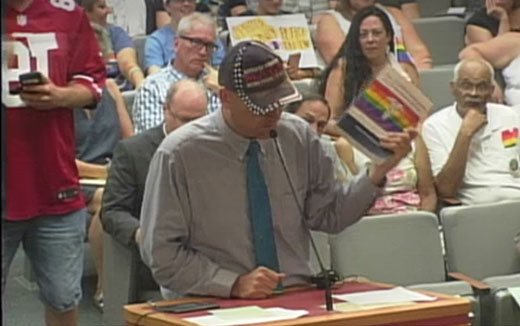 MassResistance California director Arthur Schaper donates a copy of The Health Hazards of Homosexuality to the Dixon City Council as he testifies at their July 24 meeting.

Schaper also read a statement from Jeff Belle, the Vice-Chairman of the Contra Costa County Board of Education. He is a solid, pro-family conservative on a liberal governing in a very blue county. He couldn’t be there to deliver his speech in support for Vice-Mayor Hickman, so Arthur did it for him. In his statement he said:

The way to right wrongs is to turn the light of truth upon them. Truth, in its absolute form is the Word of God! … Councilman Hickman's decision may not be the most popular, but it is the best decision given the clear choice between moral choice and immoral choice. Our children are seeking the right direction, not the popular direction.

At various times during the meeting, the local police tried to intimidate the pro-family people. But they were having none of it, and eventually the police backed off. 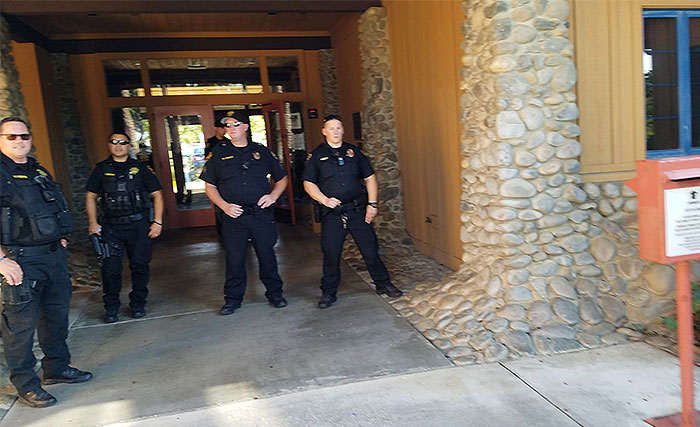 Intimidation? Just to enter the building you had to go through five police. They seem to be afraid of conservatives.

The Council makes its decision – and the LGBT lobby is disappointed

After the testimony, the City Council backed down and voted against stripping Ted Hickman of his Vice-Mayor title. Instead, they said they would explore other action against him in their next meeting on August 14.

The LGBT lobby was not happy. They wanted blood! But this time the good guys won! 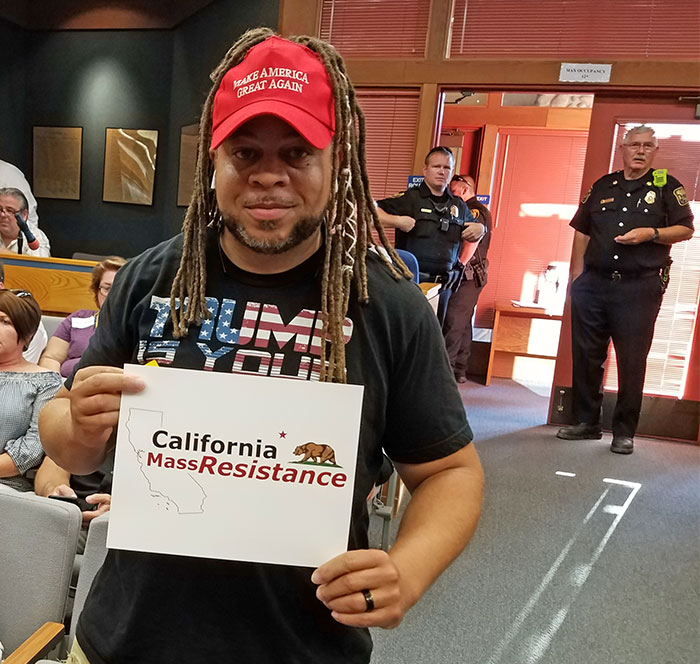 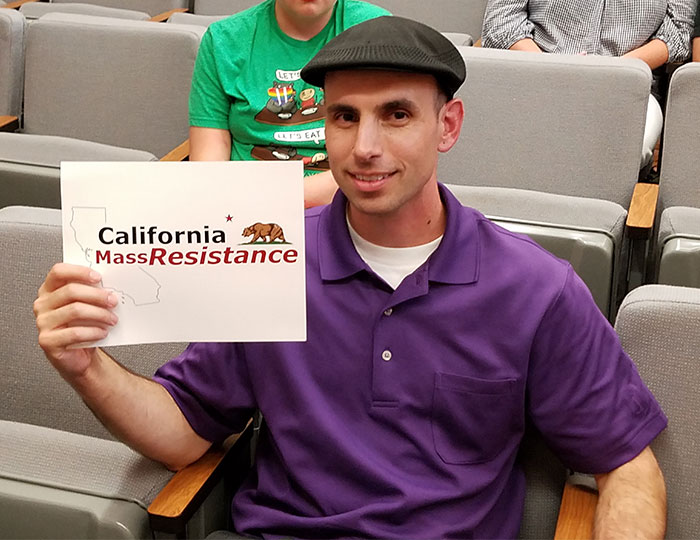 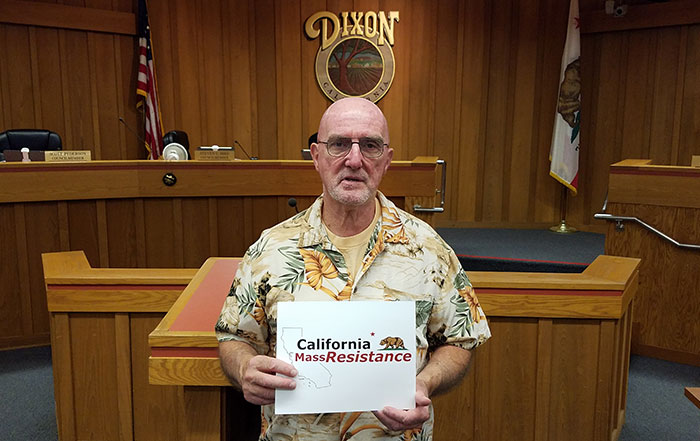 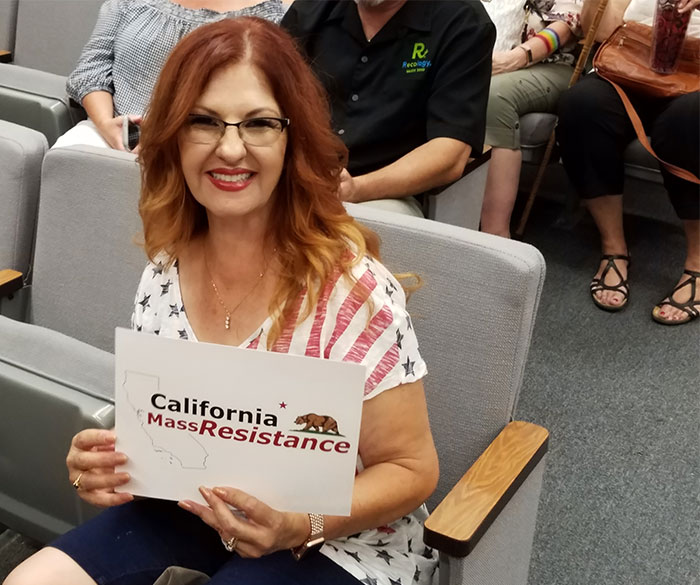 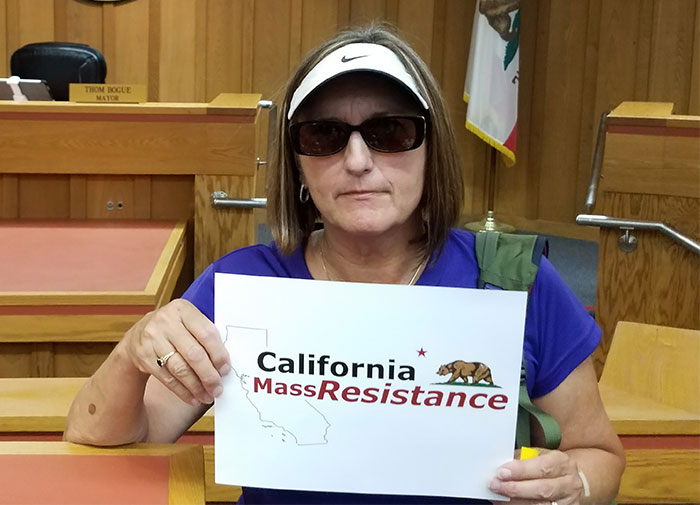 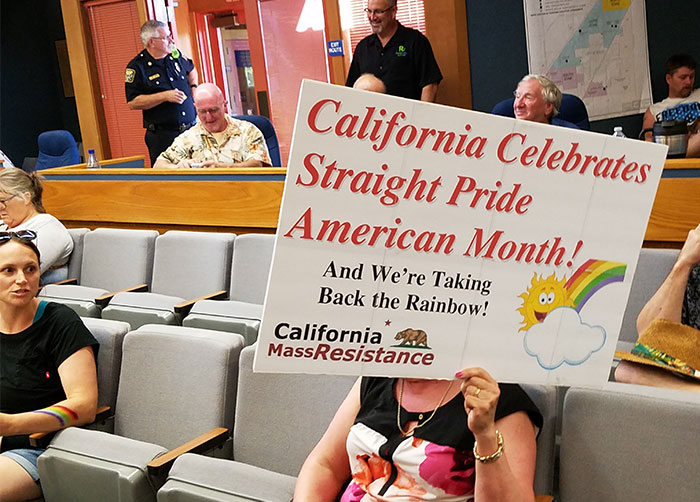 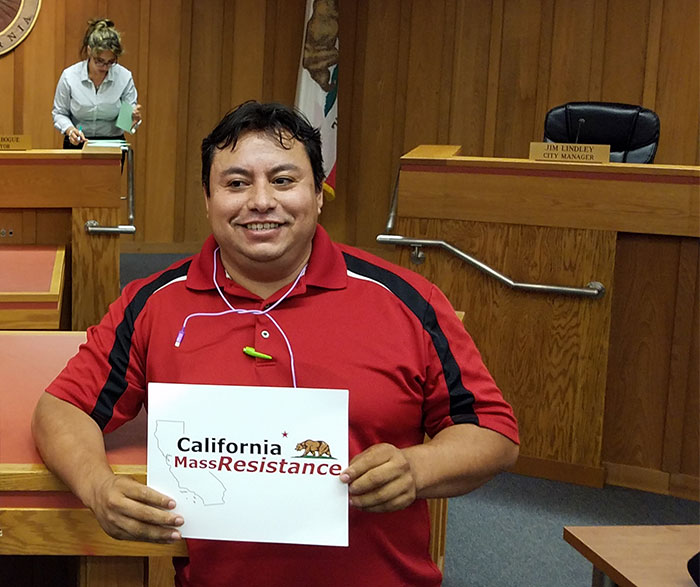 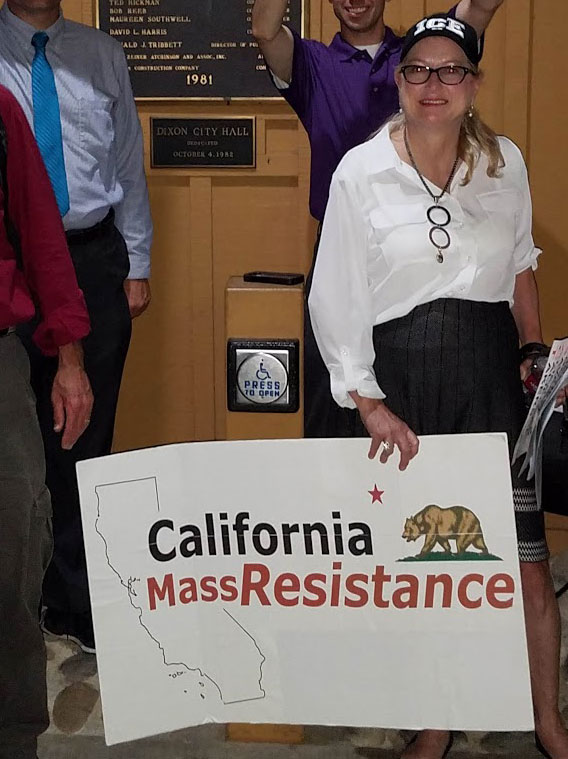 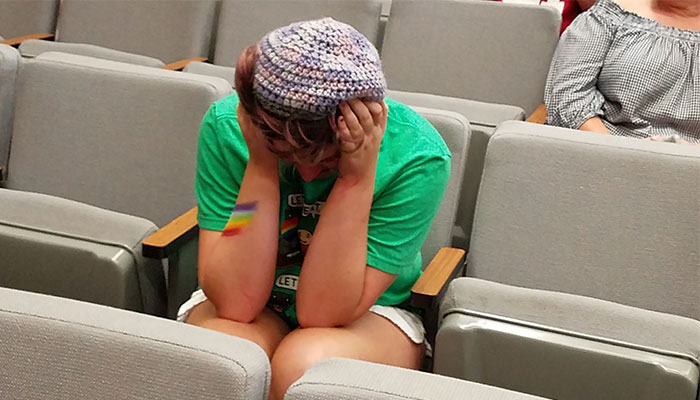