Threat of lawsuit - organized by MR Chapter including dozens of people and support of State Legislators – forced school system to surrender.

A big victory – but more fights ahead. 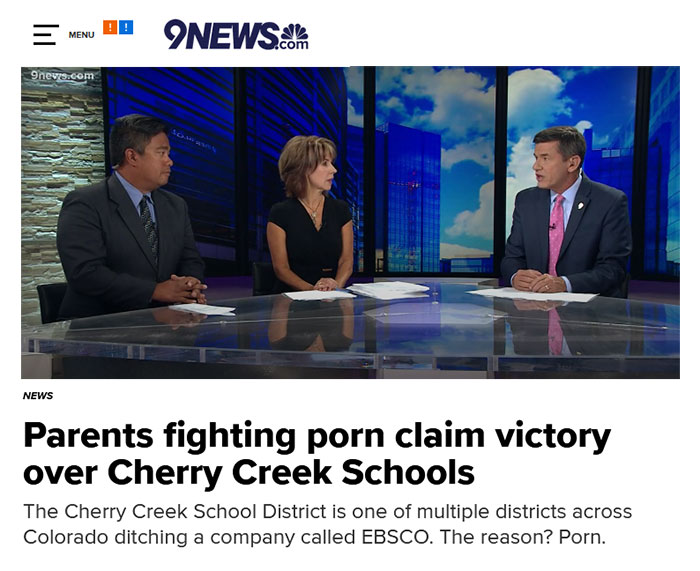 A Colorado school district notorious for giving children access to pornography has surrendered, thanks to the unrelenting efforts of our Colorado MassResistance chapter. After a two-year fight, the Cherry Creek School District in suburban Denver has announced that it is completely discontinuing the use of the EBSCO research database. The announcement came as a number of Colorado citizens, with the blessing of several State Representatives, were about to file a lawsuit against the school district.

The news was reported by at least one local Denver television yesterday.

The EBSCO database is contracted by schools ostensibly to help middle school and high school students with homework and research. The school district gave every student personal access to its EBSCO portal.

But in 2016, Cherry Creek parents Robin and Drew Paterson (who head Colorado MassResistance) discovered that the EBSCO database also gives access to large amounts of sickening hardcore pornography (much of it homosexual) which students could easily find. Much of it is through embedded advertisements or other links luring kids.

Here are some samples of what the parents found - as documented by MassResistance. (Caution: Very disturbing!)

Here are some less explicit samples of what the Cherry Creek Schools were leading children to: 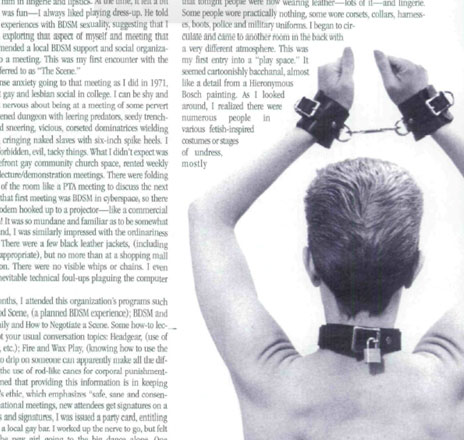 There were lots of this kind of thing luring students.

The Patersons were shocked to find this and they were determined not to ignore it.

When the Patersons began to notify several Cherry Creek school authorities in August 2016 and emailed them screenshots, etc., they were just ignored at first. Then the school officials denied that these links existed.

But the Patersons persisted. In September 2016, they were actually threatened. A school official telephoned their home and told them, “If you keep contacting people, something’s going to happen to you that neither one of us is going to like.”

The Patersons refused to be intimidated. After that, officials admitted that some pornography had been there, but claimed they’d already fixed it. But the Patersons began to find even more (and worse) pornography on the school’s system. The officials then blamed the Patersons for not having a good Internet filter!

As the Patersons continued demanding answers, the school officials became extremely hostile to them and spread ugly rumors about them being troublemakers. They were rude and condescending to them at parents’ meetings and School Board meetings. They would never give the Patersons a straight answer about anything.

See all our reports and documentation on this battle: The Patersons' battle with the Cherry Creek School District -- and the terrible things they were finding on the school portals.

At the same time, the Patersons were expanding the Colorado MassResistance chapter, organizing, publishing a newsletter, and holding meetings.

During this time Robin Paterson (who is a PhD researcher) began to find that the local libraries also had EBSCO database portals available to any child who wanted to use them! When she confronted the librarians and library Boards, they were either indifferent or hostile, and refused to deal with the problem.

On a number of occasions, she contacted EBSCO and spoke to executives there. The company itself does not hide the fact that it is a “pro-LGBT” company and encompasses a wide range of subject matter including pornography. She never got any satisfactory answers. But it became clear that EBSCO also seemed to have business and contractual reasons for including the pornography, albeit secret.

According to one source, EBSCO provides online research databases to over 55,000 elementary, middle schools and high schools across the country. It markets its databases for school children as age-appropriate and reliable. But unknown to most parents, the databases are anything but safe or kid-friendly.

As the reports of this got out, particularly regarding the Cherry Creek School District, the National Center on Sexual Exploitation took note and named EBSCO to both its 2017 and 2018 “Dirty Dozen List” of the worst twelve corporations in America that perpetuate sexual exploitation.

A lawsuit takes shape – and Cherry Creek Schools suddenly back down

For much of this year Colorado MassResistance parents were told by Cherry Creek schools that they were “working with EBSCO” to fix the problem. After over a year of pressure, they had at least been finally forced to admit that the pornography was there all along. But nothing really changed – except to get worse.

Then a few months ago, the pro-bono pro-family law firm Thomas More Society agreed to represent local parents against the Cherry Creek School District for its refusal to stop distributing pornography to children.

Approximately 60 people, including some members of the Colorado Family Foundation, agreed to be co-plaintiffs in the suit. They also earned the enthusiastic support of several conservative State Representatives.

The Thomas More Society had a lawsuit prepared and ready for filing within days when word came last Friday that Cherry Creek School District announced it would discontinue its contract with EBSCO – apparently to avoid the lawsuit.

“We don’t know if Cherry Creek had any information about the lawsuit being prepared,” said Thomas More Society Senior Counsel Matt Heffron.  “But we weren’t being very secretive about it. There were many people who were aware it was in the works.”

It’s believed that Cherry Creek officials feared what the “discovery” process would reveal about their tactics.

And this isn’t the first school to drop EBSCO since the fight became public. According to the local TV report, “Denver dropped EBSCO on June 30 and Douglas County (CO) dropped them last year. We don't know if that happened because of the fight in Cherry Creek.”

The fight must continue – in schools and libraries across America

While this is a major milestone, the Colorado MassResistance parents do not consider their efforts in Colorado to be finished. At the very least, they will continue to monitor the situation in the Cherry Creek School District.

“But everyone needs to realize,” said Dr. Paterson, “EBSCO still is supplying its pornographic databases to children in school districts -- and libraries – across Colorado and across America. So we’re not done yet.”

Unfortunately, even as this continues to be exposed and fought against, degenerate school administrators and library officials will likely continue to be a part of the problem, and vulnerable children be the tragic victims. This is probably what outrages parents the most.