Part 1 of 2: The protests and arrest

Arthur Schaper is led out by police after arrest for taking a stand and not leaving. The District Attorney had warned the city about illegally throwing out citizens from public meetings.

Across America (and certainly in California) we’ve all seen Antifa-type thugs do horrible things and get away with it. They shut down conservative speeches and events, assault conservatives in restaurants and even at their homes, block traffic, destroy property, and threaten people at will. It’s become almost commonplace. The scenes of lunatic liberals screaming and near-rioting at the recent Kavanaugh hearings will remain embedded in our minds. But nothing happens to them.

We commonly see how police routinely stand aside and mostly just watch when these things happen. On the extremely few occasions when the perpetrators are arrested, it’s basically a sham and they’re rarely punished. They simply stroll through the court system and out the door.

But with conservatives, it’s becoming just the opposite. Part of the political arsenal of many left-wing officials, prosecutors, and judges is to use the slightest infraction – real or imagined – to oppress conservatives. It’s not just cake bakers or wedding photographers anymore, but now they’re trying to target political activism that they don’t like.

One of the things that MassResistance believes – which America’s founders implored in their writings – is that when government blatantly breaks the laws it is the duty of citizens to stand up to them. In fact, it’s necessary for a free society to work. This drives the Left crazy!

Huntington Park, CA, a suburb of Los Angeles, is controlled by a left-wing city council and mayor. It has a history of illegal “social justice” activism and political corruption that upsets many of the local citizens.

Back on August 3, 2015, the Huntington Park City Council went beyond just being a “sanctuary city.”  It appointed two illegal aliens as city commission members. That is against state and federal law. Even CA Gov. Jerry Brown – a liberal – recently vetoed a bill that would have opened up boards to non-citizens (though not illegal aliens).

This took place approximately three years before Arthur became Organizational Director of MassResistance. At the time he was a member of We the People Rising, a local group opposed to illegal immigration. (The group actually has many Hispanic, black, and Asian members!)

Starting in 2015, the group comes to protest

Starting on August 17, 2015, Arthur and other We the People Rising members attended the Huntington Park City Council meetings and spoke against the appointment of the two illegal commissioners. They were often heckled and harassed by organized pro-illegal immigration activists, but they continued to come and speak. 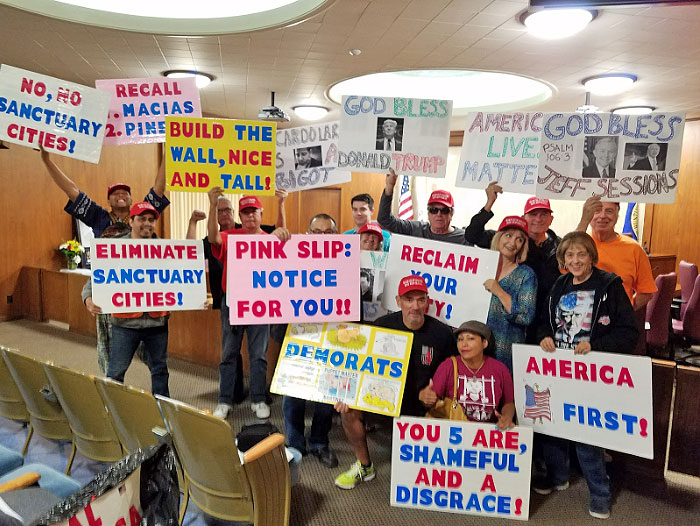 We the People Rising inside the Huntington Park City Council chambers after one of the meetings.

The Mayor and City Council members, in particular, were angry that they faced repeated challenges from citizens. They reacted by illegally harassing Arthur and the other members:

City council illegally throws Arthur and another man out of meeting. On September 8, 2015, Arthur was thrown out of the city council meeting for simply asking the council if audience members could speak. On October 6, 2015, another man, a doctor sitting in the audience, exclaimed “Yes” while Arthur was addressing the council – and got thrown out.  Subsequently, the Los Angeles County District Attorney’s office notified the city council that the city had broken state law in throwing the two men out of the meeting.

City council illegally interrupts Arthur’s speech. On Feb. 15, 2016, Arthur was reading a recall petition to the city council. But the mayor continuously interrupted him because he was not speaking about the agenda item. The mayor also allowed the audience to shout and interrupt him, to a point where no one could hear him speaking. Subsequently, the LA County District Attorney’s office notified the city council that Arthur had a legal right to speak on any subject he chose, and the city had no right to suppress his speech.

In those letters, the district attorney’s office referred to the Brown Act, a California state law which gives members of the public broad rights to attend public meetings and address the officials.

And there were more violations. At one point the city also tried to deceive the public by calling an “emergency” meeting without giving an agenda – which is clearly illegal – and the DA’s office cited them for that, also.

On June 6, 2017, Arthur and We the People Rising came to the city council meeting with a larger group than usual – including many blacks and Hispanics. However, word had gotten out and they were met with an equally large group of thuggish pro-illegal immigration activists who also came to the meeting to oppose and oppress them.

This angry pro-illegal immigration activist, addressing the city council, demanded that Arthur be thrown out of the room and said that We the People Rising is made up of "white supremacists".

This Hispanic woman, a member of We the People Rising, said that the group is not white supremacist but people, including immigrants like her, who believe in law and order.

One source in the city informed Arthur that the activists were going to every length to target Arthur personally at the meeting. As the meeting began, that clearly was happening.

It was a very contentions and heated situation. There was about an hour of testimony from both sides, peppered with outbursts and name-calling (mostly from the Leftists, and much of it was directed at Arthur).

The pro-illegal immigrant activist in the photo above came and screamed at Arthur. (Photo from Facebook video.)

A particularly strange aspect to the name-calling was that the pro-amnesty activists kept repeating the mantra that Arthur's group members were anti-Mexican and anti-black racists. But many of those in Arthur's group who were there testifying were pro-family Mexicans and blacks.

As the meeting proceeded, the council allowed most of the clapping and shouting to pass, but announced that anyone given two warnings for disruptive behavior would be ejected. A few people were particularly loud and after two warnings they were forced to leave.

During the meeting, Arthur made it a point not to make any disturbances and was quite subdued, as videos of the meeting and eyewitness accounts attest.

Nevertheless, at one point during the general commotion some members of the group of amnesty activists started loudly shouting "Shut up, Arthur! Shut up Arthur!" even though Arthur was not saying anything. They were also screaming and cursing at Arthur. The Mayor heard the shouts, and simply declared that Arthur was being disruptive. Without any “warning” the Mayor ordered the police to order Arthur to leave.

What happened next was very odd. When the police who were in the room came and told Arthur to leave, he replied that he had made no disturbance and had done nothing wrong, and was staying. (Constitutional law free-speech organizations will often advise people not to obey similar orders from police that obviously illegal. Arthur noted the letters from the district attorney’s office, and state law, about the rights of citizens at public meetings.) The police balked and did not confront Arthur. As they later testified, none of them had witnessed Arthur making any disturbance.

Then the mayor used a different tactic. She told the police to clear the room of everyone. Arthur still refused to leave, realizing the true purpose, and the police arrested him and took him away. Several other people on both sides also did not leave the meeting room, but the police only arrested Arthur and left all the others alone.

As Arthur was being arrested by the police for not leaving the room, several others were still there standing around watching, and taking videos.

After Arthur was taken out, the people who had left the room were allowed back in and the meeting continued.

Arthur was subsequently charged with catch-all misdemeanors -- “resisting, delaying, or obstructing a peace officer” and “disturbing the peace.” (The latter was later dropped.)

But this was just the beginning of a greater nightmare, as the “criminal justice” system was to be used as a club to harass and punish Arthur as severely as possible for his political opinion.

SEE Part 2 – The trial and sentencing