Bringing in police from nearby towns to guard library – from citizens who disagree. 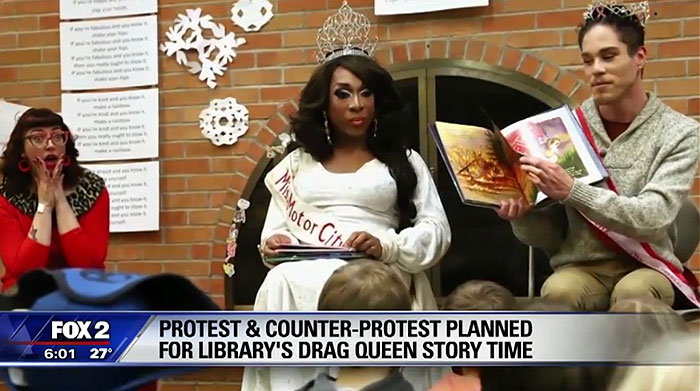 The report from the Fox TV affiliate in Detroit showed this scene of a previous "Drag Queen Story Hour" in the Huntington Woods library.

MassResistance is causing a huge stir in a “diversity-loving” left-wing town!

The Detroit suburb of Huntington Woods has reacted to Michigan MassResistance’s upcoming protest against a Drag Queen Story Hour (DQSH) event. The town plans to bring in police from nearby towns, barricade the sidewalk, close nearby streets, and impose unconstitutional “free speech zones” on protesters.

(Establishing “free speech zones” on public property? That is the same tactic used to deter our Colorado people who were protesting against a DQSH event there in December.)

On Saturday, January 26, at 3 pm the Huntington Woods Public Library has scheduled a Drag Queen Story Hour event. Besides Michigan MassResistance (which has attracted parents from across the region as well as locals), the group Warriors for Christ will be joining the protest. The Catholic media group Church Militant, based in Detroit, will be there reporting on it.

As we have previously described, so-called Drag Queen Story Hours, held mostly in local public libraries, target small children as young as 3 or 4 years old. They feature homosexual men dressed in women’s clothes and garish make-up reading LGBT-related books to children. It is pure propaganda: Their self-proclaimed goal is to “give kids glamorous, positive, and unabashedly queer role models” and to encourage young children to “defy rigid gender restrictions.”

The LGBT strategy: intimidation and harassment of objectors

A big part of the LGBT strategy is to attempt to intimidate and harass anyone who disagrees with their activities. At least two militant LGBT efforts have organized to show up to “counter” the pro-family parents outside the Jan. 26 event: Queensguard: Defending Self Expression and Literacy and Rebuke Rebuking Drag Queen Story Hour.  The latter group is especially up-front in their anti-family hostility. Here is what they wrote:

Come join us in rebuking those who wish to rebuke Drag Queen Story Hour. Let’s collectively reject the bigotry and transphobia that these people wish to bring to our community.

This tactic has already been seen in Huntington Woods. As we recently reported, after MassResistance originally raised the alarm about the destructive nature of the city’s DQSH, hundreds of angry LGBT supporters (mostly from out of town) converged on the Dec. 18, 2018 Huntington Woods City Commission to demand the event continue and criticize parents opposed to it. Although several Michigan MassResistance people stood up and spoke the truth, the City Commissioners caved in to the demands of the mob and announced it would continue.

The upcoming Feb. 26 protest has already attracted wide media attention, including a smarmy article in today’s Washington Post (which, of course, bashes MassResistance).  Other local media reports include: The Huntington Woods librarian posed for this photo in the Washington Post.

City plans to “protect” the town from the pro-family protesters

Yesterday (Jan. 24) the City of Huntington Woods sent out a public email titled “Drag Queen Storytime: What to Expect. It describes this event as a “literacy-promoting event for children.” In rather arrogant style, it outlines the rather outrageous measures the City Commission is taking to “protect and safeguard” their town during that day:

This last point is patently false. First Amendment lawyers will tell you that the Constitution does not give the government the right to unilaterally decide what is “reasonable” and suddenly put those restrictions on free speech. If it did, we’d all be in trouble.

It’s ironic that the email tries to portray that the city needs to “protect and safeguard” the library patrons from the pro-family protesters. But reading between the lines one suspects that the city officials may actually be afraid of the angry mob of hooligans that the LGBT groups bring. Those people really are prone to violent behavior. If city officials have their way, no pro-family people will be able to get this close to the library on Saturday.

In all their public communications, the Huntington Woods City Commission, library officials, and LGBT activists have portrayed the DQSH as near-universally approved in the community, and that only “outsiders” are against it.

That’s a common tactic of the Left. But it’s definitely not true.

At the beginning of January, MassResistance National Organization Director Arthur Schaper filed a Freedom of Information Act (FOIA) request with the City of Huntington Woods for all communication from citizens to the library or city regarding the Drag Queen Story Hour event. This week we received it in the mail. What we saw was startling. A very surprising number of people had written, emailed, and phoned the city about their displeasure – and anger – at the event – and also the climate of fear and intimidation surrounding it. Some of the language was very strong and descriptive of the dangers of the LGBT lifestyle on both adults and children.

MassResistance has also been contacted directly by residents of Huntington Woods thanking us for our stand – and apologizing for the hateful behavior of their elected officials against the opposition.

Getting ready for Saturday

Libraries regularly have reading sessions for children without any incident whatsoever. These people can’t seem to figure out why this is so different. Well, MassResistance has certainly gotten their attention!

We’ll have a full report on Saturday’s protest!