LGBT activists came in to intimidate and harass local parents

But Mayor agrees with constituents and publicly opposes event 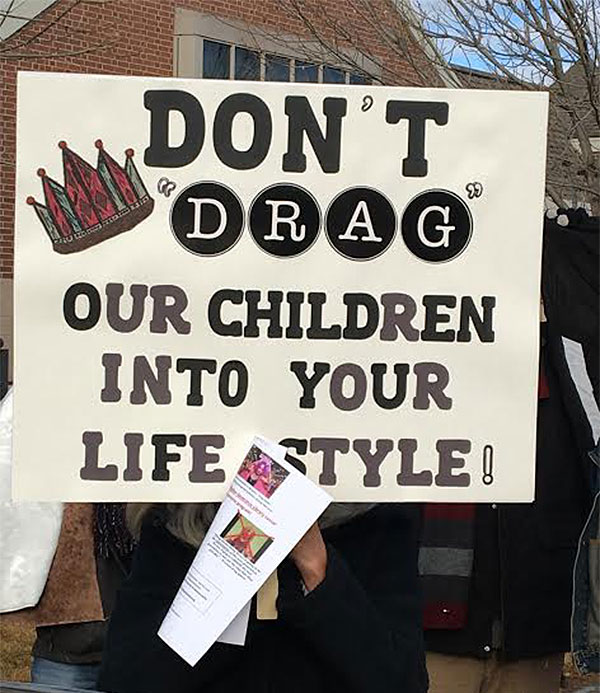 These parents aren't afraid to be direct when it comes to their children! (Note that person is also holding a MassResistance flyer!)

A conservative Colorado town was rocked this month by a radical “Drag Queen Story Hour” targeting young children at the town’s public library. Over a hundred local residents tried to stop it. Even the Mayor spoke out against it. They found they were up against a big outside LGBT force.

Finally, Colorado MassResistance parents came in and helped the local resistance. The mainstream media and LGBT movement didn’t like that at all! Even the pro-LGBT local police stepped in to help suppress the protests.

This will be an eye-opener for people in conservative towns across the country!

Windsor, CO is a town of 25,000 people located about 50 miles north of Denver. The people and their local officials are fairly conservative. But the town’s public library is part of an autonomous Library District controlled by its own Library Board which answers to the state, not local people.

Over time, the library board has become populated with liberals who have hired a radical pro-LGBT activist as Library Director. According to reports, she has hired “gays” as library staff as much as possible.

As we have previously described, so-called Drag Queen Story Hours (DQSH), held in local public libraries, target small children as young as 3 or 4 years old. They feature homosexual men dressed in women’s clothes and garish make-up, and they read LGBT-related books to children. Their self-proclaimed goal is to indoctrinate children – to “give kids glamorous, positive, and unabashedly queer role models” and to encourage young children to “defy rigid gender restrictions.”

So when Windsor parents saw the lurid ad for “Drag Queen Story Hour” at their local library – featuring a man in skimpy female attire – they were shocked and outraged. They also learned that the event was being paid for by SPLASH, a state LGBT group targeting children. The library's ad made the preposterous claim that exposing young children to homosexuality and cross-dressing was an “important resource” to stop bullying and child suicide – and therefore must be done.

Parents thought it was impossible that their library would bring in sexually deviant men, flamboyantly dressed as women, to parade themselves in front of preschoolers. But they were wrong.

A local Catholic priest was horrified and encouraged his parishioners to join him and attend the Dec. 12, 2018 Library District Board meeting to complain and demand the event be stopped. Over 100 people came and the majority were from his church. According to reports, the comments were almost unanimously against the event. But the Board refused to listen to them. So the “Drag Queen Story Hour” was to go on unimpeded.

After the meeting a pro-LGBT activist angrily confronted the priest. The altercation was so bad that the police were called. It has, unfortunately, dampened the priest’s willingness to organize further on this issue.

Several days later, on Dec. 18, 2018, the pro-LGBT library director, Ann Kling, sent a letter to members of the Windsor community. She said that the library had received 215 comments and messages about the upcoming “Drag Queen Story Hour” and that over half, (52%) were in support of it. Therefore, she said, “After careful deliberation, we have chosen to move forward with the event.” She also included the absurd LGBT argument that this is necessary to eliminate bullying and suicide by children. Read the letter here.

Everyone in Windsor we talked to said that Kling’s claim that there was 52% support in the community was simply a lie, and that the “52% support” obviously came from outside LGBT activists – a common tactic.

Parents were more upset than ever – and they let their local politicians know it! As a result, on Jan. 4, 2019, Windsor Mayor Kristie Melendez posted a message to the community on Facebook.

She refuted the library director’s claim about support for the event and said that she believes it should be cancelled:

[T]he numbers are clear to me—our community for the most part, feels this event is inappropriate for children and does not want it to take place. I feel obliged to advocate for these constituents and ensure that they are not ignored.

Her post was met with great approval in Windsor and social media attacks from outside LGBT activists. But unfortunately, the Mayor had no power to stop the event.

As the Jan. 12 Drag Queen Story Hour approached, MassResistance was contacted by parents in Windsor asking for help. They felt blindsided – taken by surprise by a well-organized LGBT machine. So we got our Colorado MassResistance chapter on it immediately!

Our people talked to local activists and friendly public officials and quickly got the lay of the land. They also contacted local churches. It was clear that this was being organized by state LGBT groups and they were taking advantage of the library’s political autonomy to force their way into this conservative community, using lies, deceit, and brute force -- leaving the locals seemingly helpless.

David Huntwork, a Windsor father and local Patriot activist, organized a group of other Windsor parents and citizens to protest outside of the library during the Drag Queen Story Hour. Colorado MassResistance helped Huntwork promote the protest, and also brought some of our own activists.

The day of the event – protests, intimidation, police suppression

On the day of the event, Jan. 12, six Windsor police officers and two additional security guards were guarding the library. The police told the local parents that they could not protest in front of the library, but had to go to a designated “free speech zone” some distance away. This had never been done before, and the parents were outraged at that order, but they complied. (We believe the police order was illegal.) 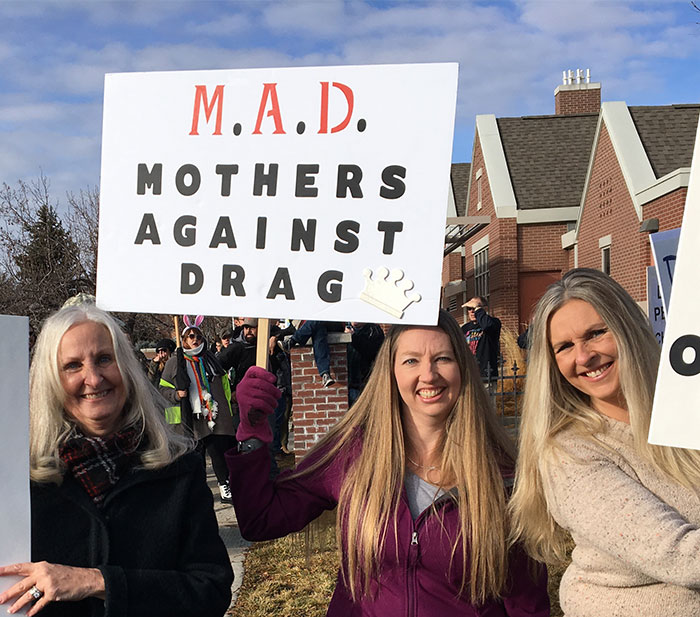 These parents (and grandparents) are not afraid of what liberals think of them. 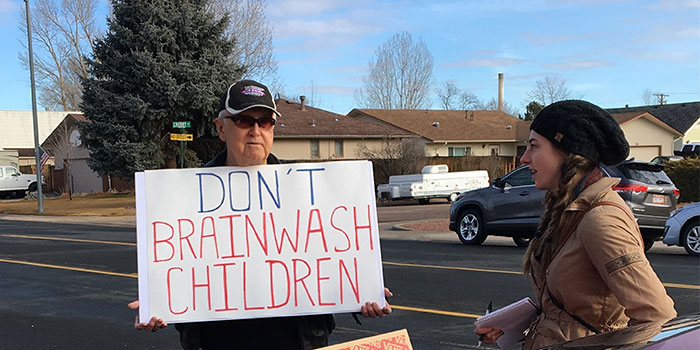 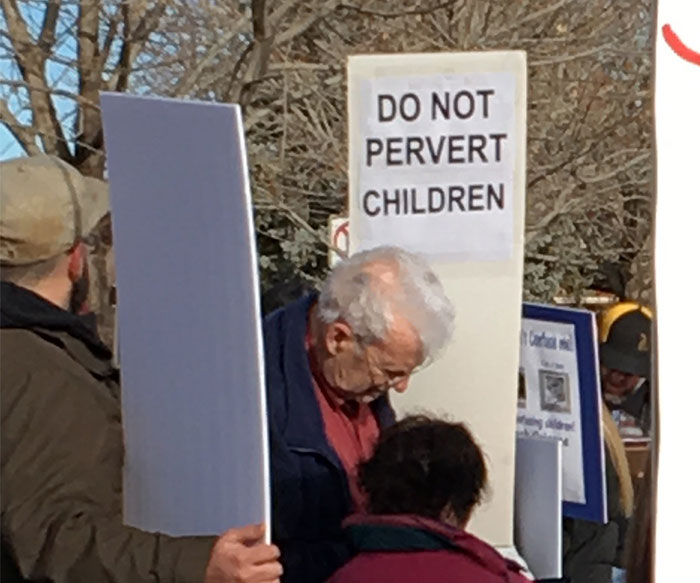 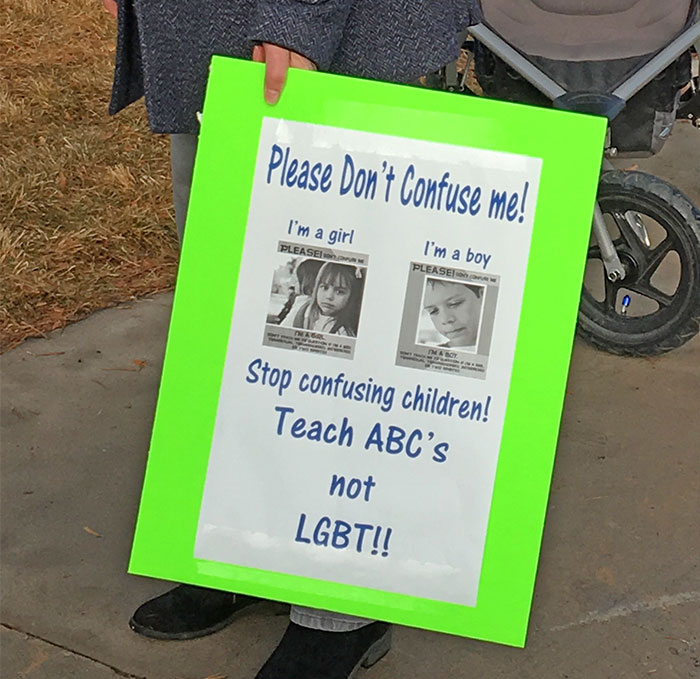 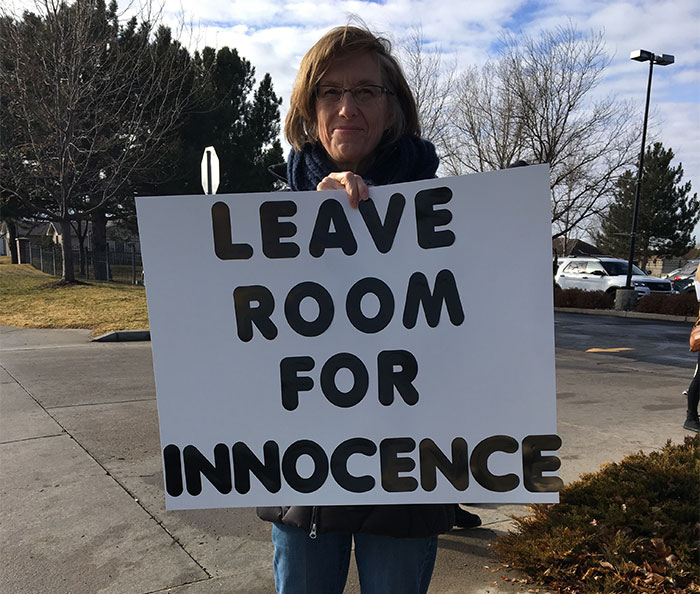 We're sure this message was incomprehensible to the library staff there.

The police refused to let people – even local residents – into the library who were not connected with the Drag Queen event, citing fire code regulations (a questionable reason). The police wouldn’t even allow reporters from the local newspapers inside the room to cover it!

Earlier that day, a Colorado MassResistance mother had gone inside the library and posted a flyer about the Drag Queen event on the library’s community bulletin board, and then placed copies on chairs in the room where it was to be held. A library staffer quickly removed all of them. See the flyer here. 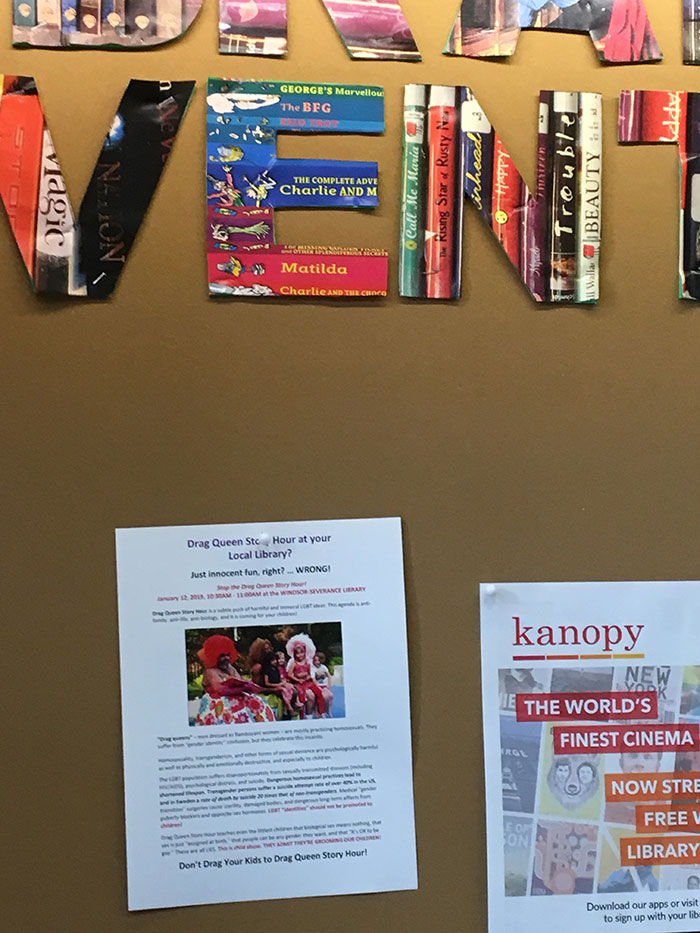 The MassResistance flier warning about the Drag Queen event was on the bulletin board ... for a few minutes.

About 80 people, including children and participants, came into the library for the event. We were told that almost all of them were from out of town. There were a lot of same-sex parents with children that no one had seen before.

The Colorado MassResistance mother with the flyers stood on the sidewalk outside the library main door and began passing out flyers to people coming in. The police confronted her and ordered her to move to the “free speech” zone. She argued with them about the notion of “free speech zones” in America, but eventually complied rather than be arrested. 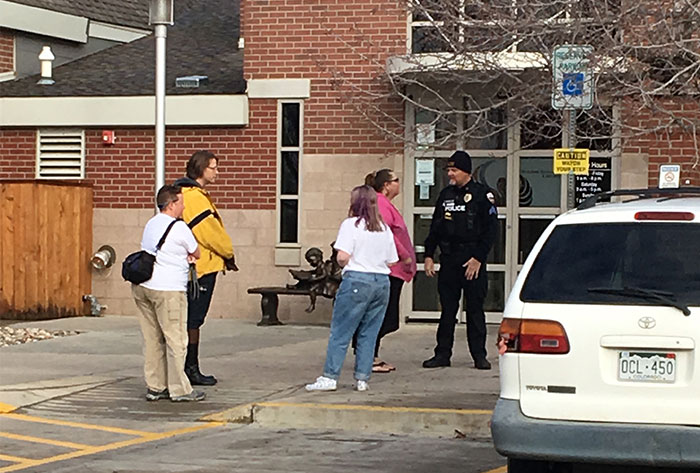 The police patrolled the entrances to make sure no pro-family people were handing out fliers -- even though it was clearly public property. They gave the absurd excuse that it would be "impede" patrons from coming in!

Soon about 40 pro-LGBT counter-protesters arrived. They tried to appear like they were locals, but they were clearly brought in by SPLASH, the state Colorado LGBT activist group – a common tactic to show artificial support. Gloria Belden, a fifth generation Windsor resident, was standing right there. She told us that she did not recognize even one of them. 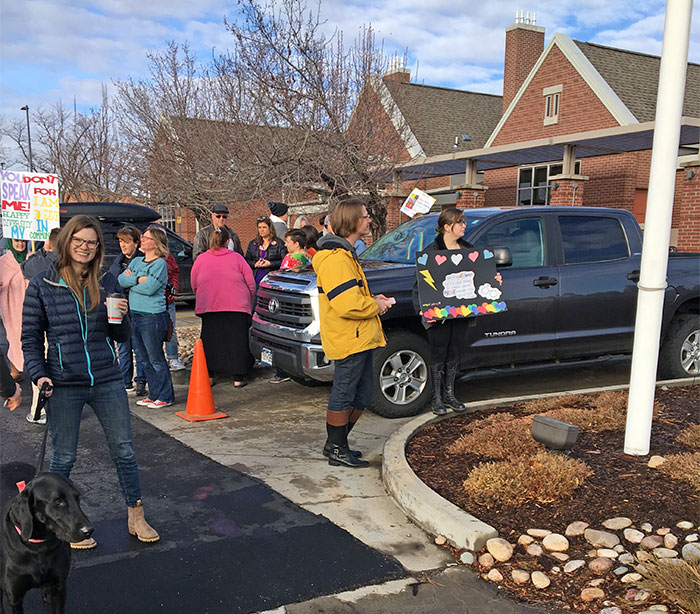 The LGBT activists from SPLASH arrive. 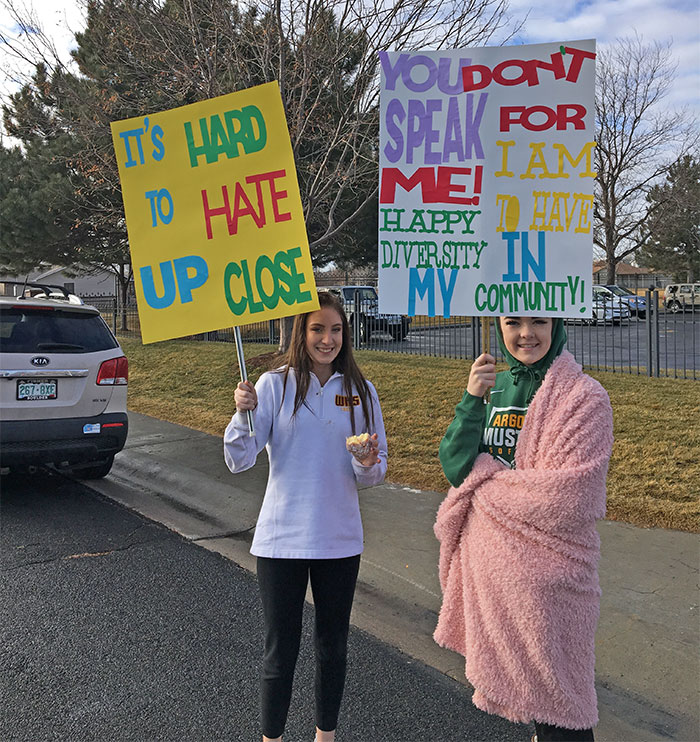 As usual, they can't defend what they're doing so they demonize the local parents.

The police made them stand at one end of the “free speech zone.” They began yelling vulgar chants at the Windsor parents. In response to a Christian prayer circle they yelled, “You can’t pray the gay away,” and “2,4,6,8 … How do you know your kids are straight,” and “Pro drag, pro fag.” They also accused the parents of hatred and lying. 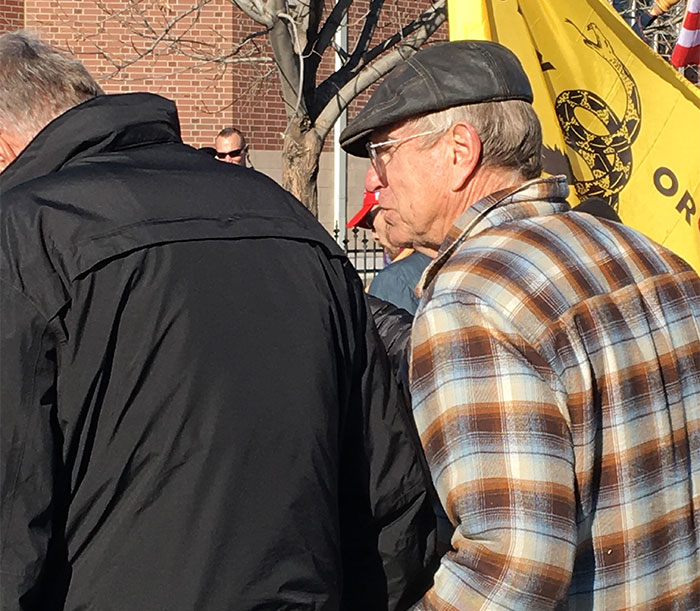 When the Windsor parents and grandparents got together for a prayer circle, they yad to endure vulgar chants from the "tolerance" crowd. 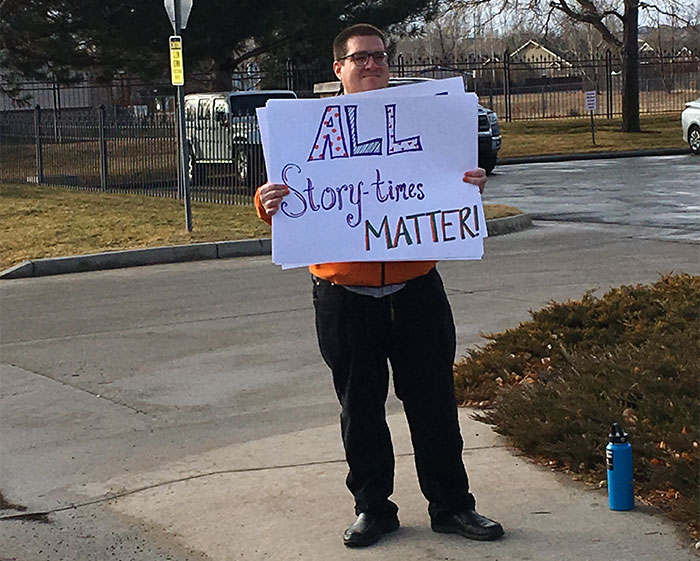 How lame does it get?

At the end of the event a woman (who appeared to be a staffer) came out of the library and told the LGBT agitators what a great job they had done, and that everyone needed to keep in touch.

The propensity of the Left to lie about their actions and demonize those who disagree with them is astounding. 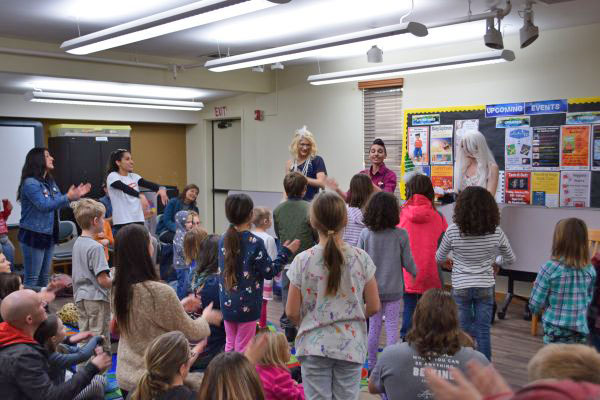 Because they wouldn't allow reporters into the event, the library later released this photo of the Drag Queen Story Hour that the newspapers could use.

Immediately after the Drag Queen event, MassResistance Organization Director Arthur Schaper complained to several Windsor city officials about the outrageous, unlawful, and unconstitutional treatment of the Windsor parents by the police and library staff.

The next day the library director sent a blistering email to the city officials attacking Arthur and making absurd statements that belie the truth. For example, she claimed (1) the library was in fact open and available to everyone before, during and after the event; (2) protesters were allowed to – and did – distribute flyers outside the library during the event; and (3) protesters chose where they wanted to protest. These assertions were all patently false.

She also repeated the tired old LGBT lies told about MassResistance (and hundreds of other conservative groups) – that it is a hate group, condemned by Democrats and Republicans, blah, blah, blah.

On Jan. 16, a MassResistance activist asked that the Windsor police chief answer questions about the bizarre rules and police behavior during the Drag Queen event. The Mayor of Windsor agreed and directed the police chief to answer the questions.

The police chief completely refuted the library director’s statements (above). He admitted that (1) only “ticketed” people were allowed in the library – it was not open to everyone; (2) leafletting was not allowed outside the library (for a ridiculous reason); and (3) that there were in fact “free speech zones” where the protesters had to be, and these zones were determined by the library.  Read the police chief’s email here.

The police chief also admitted that reporters were not allowed in the event – and that was the library’s decision.

The library director has not scheduled another Drag Queen Story Hour – yet. But it’s sure to happen.

This is really a battle between a conservative town and the larger LGBT movement that has taken control of the larger statewide body, successfully infiltrated the local library district, and employs ruthless methods.

It is also scary that the police force – like so many others across America – is so pro-LGBT that they enthusiastically followed the library director’s outrageous orders against parents, even though the police work for the Mayor, not the library. (And the Mayor opposed the entire event!)

The local Windsor parents are not giving up. They are determined to confront these problems through political action. And Colorado MassResistance will be there to help them!