Campaigned jokingly as “a proud homophobe” 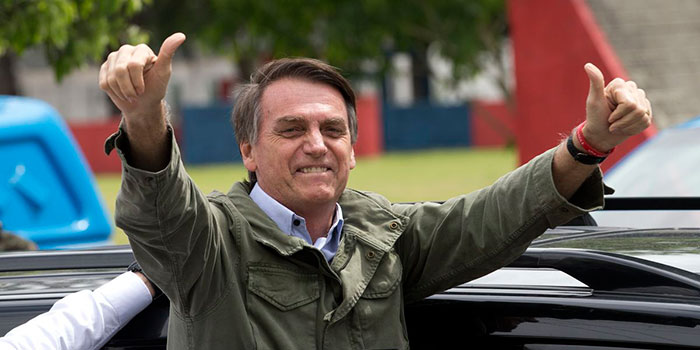 For the first time in decades, Brazil has elected a right-wing President whose beliefs are in stark contrast to the socialism (along with its graft, and legalized theft) which has dominated Brazilian politics.

The new President, Jair Bolsonaro ran to end business as usual in many ways. He would allow law-abiding Brazilian citizens to own firearms. He vowed to crack down on rampant crime and gang activity. Like President Trump, he swore to relocate the Brazilian embassy in Israel to Jerusalem. All of these conservative promises are stunning, and let’s hope that he follows through on them.

His most stirring campaign promises, unheard of in the Western World today, rested on pro-family issues. He actually campaigned as a homofóbico orgulhoso, or a “proud homophobe”. Not surprisingly, the mainstream media became hysterical. As The Guardian reports:

In nearly three decades as a congressman, Jair Bolsonaro has never concealed his dislike of gay people. “Yes, I’m homophobic – and very proud of it,” he once proclaimed.

In a 2013 interview with Stephen Fry – which the British actor later called “one of the most chilling confrontations I’ve ever had with a human being” – the far-right populist claimed “homosexual fundamentalists” were brainwashing heterosexual children to “become gays and lesbians to satisfy them sexually in the future”. Bolsonaro declared: “Brazilian society doesn’t like homosexuals.”

His position would be not only be unheard of the United States, but such a politician would be forced into a dark corner, never to emerge in politics ever again. “Conservative” Governors in the United States have caved in to corporate bullying, including ludicrous threats to boycott their states, after merely signing commonsense legislation to protect religious liberty or ensures the safety and sanctity of women and children in restrooms.

In Canada, such a politician would likely face fines, lawsuits, or even imprisonment. Regular citizens like Bill Whatcott are enduring such persecution in their own “free, Western” countries precisely because they speak out against the LGBT agenda, and in much softer terms than Bolsonaro. Other political candidates pledged to abolish  gay marriage, like Marine Le Pen of France, but even she was reticent about it, and she ultimately lost.

Some defenders could chalk up Bolsonaro’s blunt rhetoric as that … mere rhetoric. After all, Bolsonaro assured voters that he would govern for the good of all Brazilians. At the same time, he rightly condemned the whole LGBT movement as a bunch of people filled with “self-pity”, or more accurately, self-defined by their “victimization.” This victim tactic from the LGBT Left has been used successfully to bully legal and cultural concessions from the most of the Western World.

However, these tactics failed in Brazil, and “The Trump of the Tropics” won by a stunning 55%. Strangely enough, 29% of homosexuals voted for Bolsonaro in order to avoid another corrupt, socialist government. Besides, gay marriage is already legal in Brazil, but that did not stop the newly-elected President from speaking out against the whole ideology and the lifestyles connected to it.

In fact, he ran as a “Proud Homophobe,” and still won.  After his swearing in, the new conservative President announced his goals and commitments:

To unite the people, rescue the family, respect religions and our Judeo-Christian tradition, combat gender ideology, conserving our values.

Imagine if citizens heard more of that from President Trump, Prime Minister Trudeau, or even French President Emmanuel Macron!

Within hours after his inauguration, Bolsonaro issued an executive order in which homosexuals, transgenders, and the rest would no longer receive special rights under the Human Rights Commission. This is the kind of  bold move needed from conservatives around the world to protect the natural rights of all, the nuclear family, and the stability of the nation.

Thankfully, Bolsonaro is not the only executive resisting the political correct pressure to protect LGBT behaviors as a civil right. Others are at least taking baby steps in that direction. President Trump has rolled back recognition of homosexual activism and history in his Administration. His Secretary of the Department of Housing and Urban Development, Dr. Ben Carson, rejected granting “special rights” to any one group. Florida’s new governor Ron DeSantis removed LGBT protections as another category for protection from discrimination.

But Bolsonaro’s rhetoric and action have been the boldest yet. Why did this candidate succeed in Brazil with such a bold anti-LGBT platform? On a larger note, why hasn’t this strong pro-family pushback emerged in other Western Countries?

One thing is certain: with more bold leaders like Bolsonaro speaking unequivocally against the destructive nature of homosexuality and its accompanying behaviors, more leaders and citizens like with gather the courage to speak the truth about the LGBT agenda, and find the resources and popular sentiment to support their fight for faith, family, and freedom.

Hopefully, for that to happen in the United States, Canada, or Europe the economic and political dynamics will not have to sink to such a chaotic low as they had done in Brazil.