But it’s not over – local pro-LGBT church rents a library room to have the same event.

Battle has now made national news! 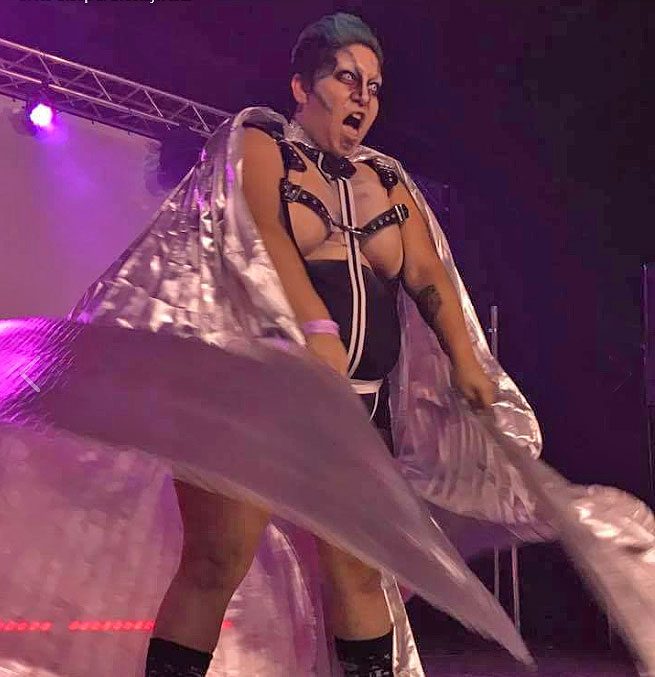 This is the "Drag Queen" that library officials and LGBT activists invited to read to children in Leander, TX - exposed by MassResistance.

Back in May, local residents in Leander, Texas, a suburb of Austin, contacted MassResistance asking for help. They were outraged that their local library had scheduled a Drag Queen Story Hour to take place on June 15. Their taxpayer-funded library would be targeting young children with radical homosexual and transgender propaganda. But they didn’t know what to do to stop it and felt powerless. 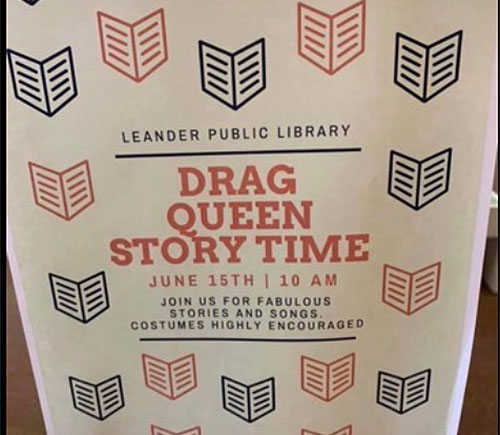 The library tried to make it look like a normal reading event for children.

Tracy Shannon and her fellow activists at Houston MassResistance got right to work helping the Leander people. To start with, they supplied them with fliers to inform the community, and helped them organize.

Soon the Mayor and City Council were flooded with phone calls and emails from angry citizens. This kind of uproar rarely happened in Leander. The pro-LGBT activists in the area quickly took note and started to marshal their forces. 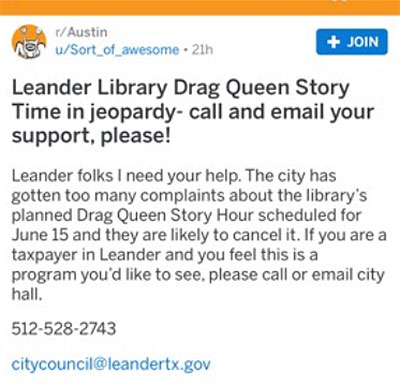 Pro-LGBT activists took to social media to try to save the "Drag Queen" event. But it didn't work.

But then Houston MassResistance hit the city with a bombshell. Tracy and the others had put together a ghastly 57-page exposé of the “Drag Queen” who was to be reading to the children at the Public Library event. The person, who goes by the name Valeri Abrego-Liszewski, is actually a female who often calls herself a “Drag King” and appears to be a bizarre type of stripper. Her various social media photos, shown in the report, are repulsive and pornographic. One could easily see this is definitely not a person you would want teaching anything to young children.

On May 22, Tracy emailed copies of the report to the Mayor and the City Council members, as well as members of the community.

Then Arthur Schaper, the MassResistance Organization Director, immediately followed up with strongly worded emails to all the city council members. He demanded to know if any criminal background checks are done with the Drag Queens. He also reminded them that recently two “Drag Queens” in Houston had been revealed to be convicted child sex offenders. And he demanded that the Drag Queen event in Leander be shut down.

Arthur got a quick reaction. That same day two of the Leander City Council members telephoned him! They told Arthur they were newly elected and had just found out about it. They said that a third party contractor runs the public library and they don’t have any control over it. But then they said, “We’re cancelling this event.”

The next day, May 23, the local Leander newspaper reported that the Drag Queen event had been canceled by the city. City Council members gave the same mixed messages to the media about canceling the event even though they technically had no direct power over the library. Nevertheless, this was a big victory for the citizens of Leander.

But the newspaper also reported that a local pro-LGBT church had now rented a room in the library and would hold the same planned Drag Queen Story Hour there on the same day it was originally scheduled, June 15. This suggests an obvious collusion between the library staff and the LGBT activists to keep the event alive without the city taking the heat over it. The article also mentions that MassResistance intends to protest if that happens.

The May 23 edition of the local newspaper.

And sure enough, this new advertisement was already being sent through local social media: 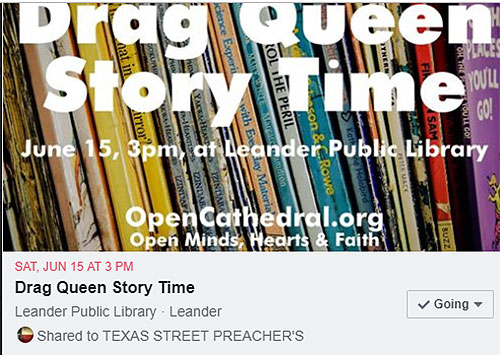 This showed up on social media almost immediately after the city announced it was canceling the event.

The fight is on again!

The fight is on again! On May 25, Arthur sent the City Council another strongly worded email urging them to pass an emergency motion suspending all outside activities at the library until further notice. Next, he wrote that they should draw up guidelines to ban from the library adult entertainment and sexual-related programs aimed at children. He included recent court cases supporting that action. But this time, the City Council members didn’t respond.

Residents of Leander have also resumed their calls and emails to their Mayor and City Council demanding action.

Meanwhile, the City quickly updated the Library page of the city's website. They posted a rather weak explanation for why this bizarre event is still heppening. (And later they posted a notice that they are completely closing the library to the public on June 15 in order to accommodate this outside event. This is more evidence of collusion with the event supporters.) 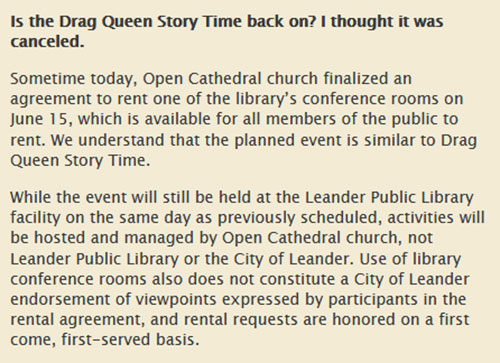 On the City's Library web page.

Tracy and the Houston MassResistance parents have compiled yet another exposé – even worse than the first. This latest 51-page report is from the club that the Drag Queen regularly performs at. This is the “culture” that is being brought into the Leander Library. See the report here. (Caution: VERY graphic images.)

Texas MassResistance activists have organized a big protest outside of the Leander Library on June 15 during the “Drag Queen” event. Groups from around Texas have said they’ll join the MassResistance protest that day.

The radical Left is already reacting in a nasty way to the MassResistance protest and will also be there. The Antifa chapter from Austin has also indicated they are coming. (Note: We have always said that Antifa is over-rated. They’re not exactly bruisers. From what we’ve seen close up, they’re mostly a bunch of skinny social-justice types with sticks and bicycle chains, hiding behind masks. One good punch could take down about three of them.)

Nevertheless, the Leander police have made it clear that they are not going to allow any violence by the Antifa thugs. They’ve already contacted MassResistance and assured us that they will protect all of our protesters. We get the sense that there’s a big undercurrent of support in Leander for what we’re doing. 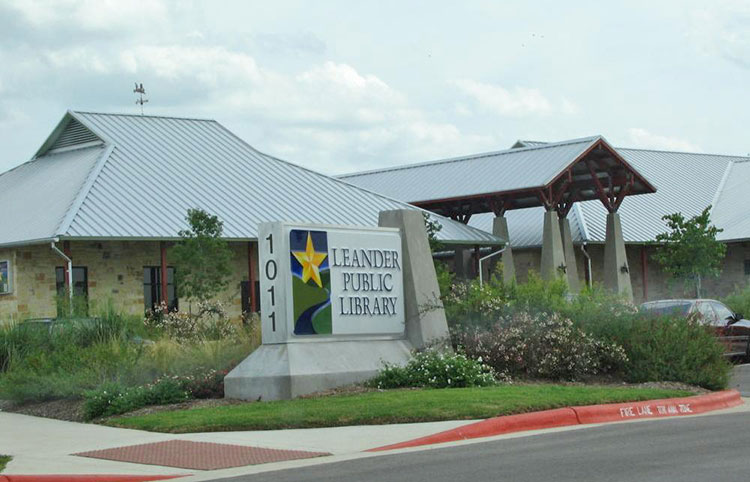 This will be a very busy streetcorner on June 15 if the city officials don't act properly and suspend the library event.

It drives the LGBT movement crazy when groups like MassResistance successfully stand up to them, so this story eventually got the attention of national media. The Washington Post did an article on it yesterday (June 11). Not suprsingly, they bashed MassResistance using the disgraced Southern Poverty Law Center. The Hill has also chimed in. 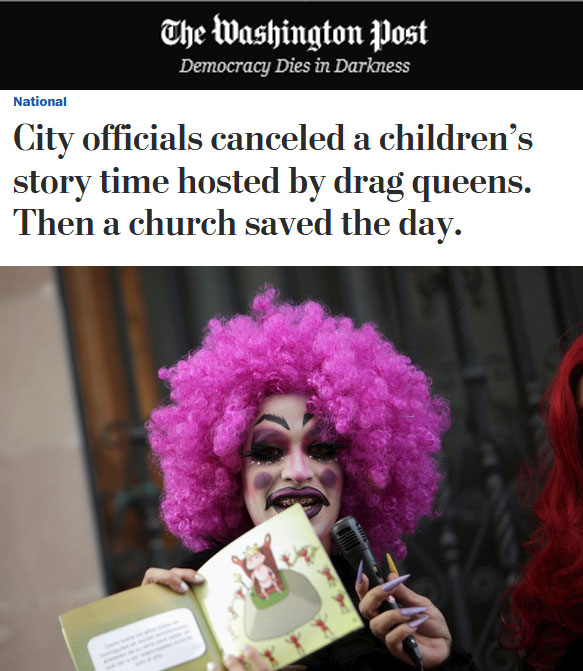 Obviously, the question that always comes to mind in this kind of situation is: What kind of sick, perverted people would want to promote something like this to innocent children? Nobody we know would ever dream of doing this. Yet the public libraries, left-wing “churches,” and similar venues seem to attract those kinds of people. It’s very troubling to think about.

In the Leander episode, we had two interesting observations. Both of these are reflected in the local newspaper article above.

First, when MassResistance got the ball rolling in town that it’s “all right” to speak out against the Drag Queen event (i.e., the latest phase of the LGBT agenda), lots of people came out and did speak out – mostly by social media but also in other ways, such as calling and emailing their public officials.

And second, the so-called “LGBT community” admitted that they’re the ones who are pushing this – and that they identify with it so strongly that they consider criticism of Drag Queens as an attack on them. What does this say about their values? What does this say about what “LGBT parenting” is like to kids? One of the things that protesters of these events notice is that a large proportion of attendees are same-sex couples with children. That is also very troubling.

We will let you know what happens on June 15!