Up against deceitful school officials who flout the law and push extreme agendas on young students.

Parents confronting the School Board! 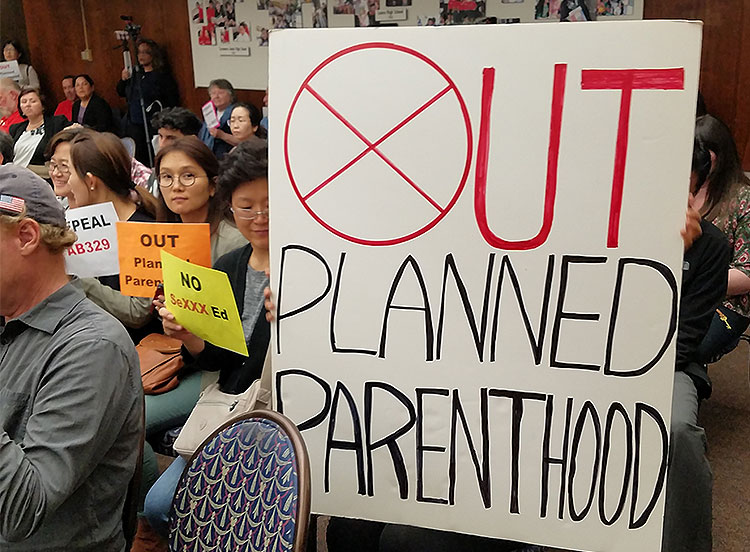 At the School Board meeting, the parents were not shy about what they are demanding!

California MassResistance is helping parents get Planned Parenthood (and its VERY graphic sex-ed) thrown out of the junior high schools in the Anaheim Union High School District, despite hostility from politicians and a campaign of deception and misinformation by school administrators.

This began with a previous success in that district. As we recently reported, California MassResistance put a stop to a planned week-long program of transgender indoctrination in the Anaheim Elementary School District. Its 23 schools (with students aged from 4 to 12) are in the Anaheim Union High School District.

Since that report went public, the CA MassResistance team has been getting lots of support – and inquiries from parents across California about how to stop this agenda in their children’s local schools.

Shanda, one of our CA MassResistance leaders, started receiving calls and texts from several parents with children at a nearby junior high school in that same Anaheim Union High School District. The parents told Shanda that Planned Parenthood representatives were in the school teaching the “comprehensive sex-ed” classes. They said their children were coming home with lurid descriptions of graphic homosexual sex, pro-abortion counseling, and other explicit and distressing “instructions.” The school administration had apparently brought Planned Parenthood into every junior high school in the district.

People are finally becoming empowered on this issue!

It’s easy for the district to use the schools to push these radical agendas on young children. The majority of parents in this school district are immigrants, and most don’t speak English as their first language. Many work long hours to make ends meet. The schools were taking advantage of this by pushing the most explicit sexuality programs they could, and making things confusing and difficult for parents. The parents complained to Shanda that, among other things, they were not given proper instructions how to opt-out their children if they wished, or descriptions of the sex-ed courses that they could understand. When they tried to talk to the school administrators, they were given the run-around.

According to Shanda, schools are blatantly not following the California state law, AB329, passed in 2015, which “authorizes” school districts to provide “comprehensive sex-ed” in public schools. Administrators have been telling parents that schools are “required” to include very graphic, explicit, and controversial material. The school districts are making it difficult for them to opt-out or view the coursework. Although “HIV education” is required, and the law is unquestionably written as pro-LGBT and anti-Christian, school districts have much more latitude than they tell parents.

Shanda was also at that meeting. She spoke with several of the parents who had come to object to the curriculum. "We all know that Planned Parenthood is in every other school in the district doing the same thing," she said, "and other parents and children are being victimized by it. Something must be done."

There was a meeting of the Anaheim Union High School Board that same evening. Shanda encouraged the parents to attend that meeting and demand that the School Board remove Planned Parenthood from all the schools in the district. The parents agreed!

Confronting the Anaheim School Board

That evening about 20 parents came to the Anaheim Union School Board meeting along with Shanda. Six of them testified – very strongly – during the public comments section. The Board clearly wasn't ready for that! 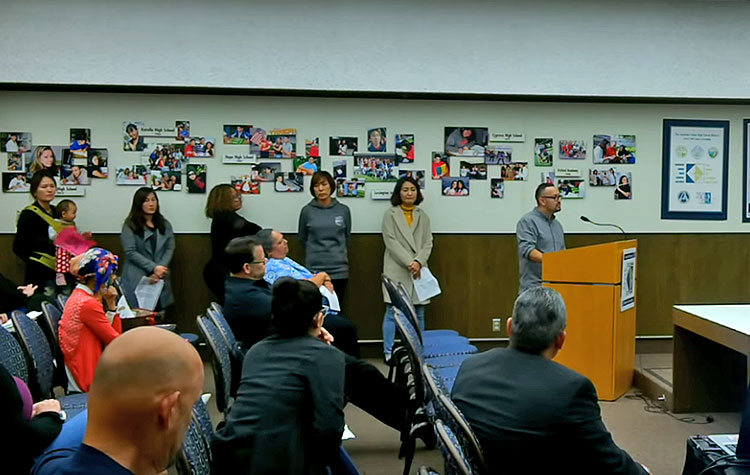 Parents lined up to address the School Board about the horrific Planned Parenthood sex instruction (Shanda is third from left).

One mother who has a daughter in the 7th grade (in photo above, next in line to speak) told the Board:

My daughter came to me and asked “What is oral sex?” She said she learned it from a guest speaker from Planned Parenthood. The speaker explained what oral sex is – mouth to penis and mouth to vagina. The students were told how to use a condom. And that they could have an operation without parental consent. The guest speakers brought weird things to the class and said kids could put them on their private parts and kiss them there. And if they don’t like the flavors, there are other flavors.

The teacher told us this is based on California’s education law. But this is not the way to prevent STDs or STIs.

The school has sent a very casual flyer regarding the sex education to parents at the beginning of the semester. But the flyer included only brief information without any details. So parents don’t know what’s being taught.

Immediately following her, another mother (in photo above, second in line to speak) didn't mince words with this chilling testimony:

That mother went on to what say what she heard herself when she visited the class and sat in during the lesson:

They cover the LGBTQ [issues] on Lesson 5. I don't want my kids to be brainwashed and learn about those things. I heard the Lesson 5 guest speaker in the class say, “There is biological identity but it’s something from your heart and that’s how they feel. Do what makes you happy, you don’t have to be girly or boyish.

The Board members at first seemed unbelieving, even hostile. One said out loud that the second mother’s testimony is “Not true.” Another Board member asked the Superintendent to explain this but got no answer - and didn't press for one. They clearly weren’t interested in dealing with the parents’ distress and outrage, and seemed relieved when the meeting was finally over. 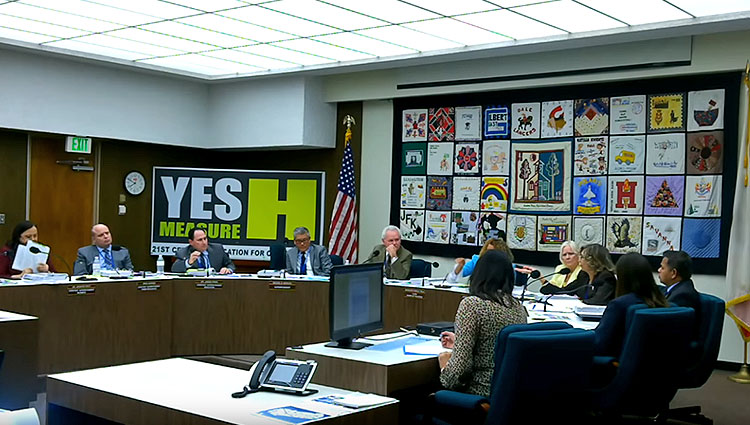 One School Board member asks the Superintendent (sitting under the word "YES") for an explanation, but doesn't bother to press him for an answer. The others didn't seem particularly interested.

Video of the March 5 Board meeting, taped by MassResistance

Back at the School Board the following month!

So at the following board meeting, on April 11, the parents came back – and brought even more outraged parents. The Board reacted by cutting each speaker's time from 5 minutes to just 2 minutes. That made the parents even angrier. 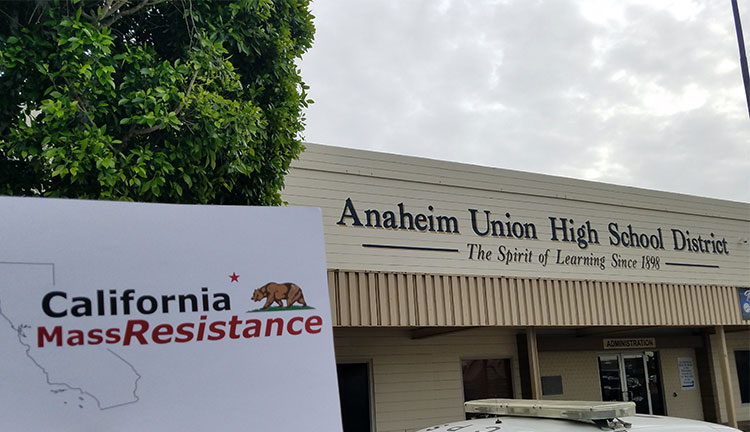 Outside the meeting one person holds up a "MassResistance" sign.. 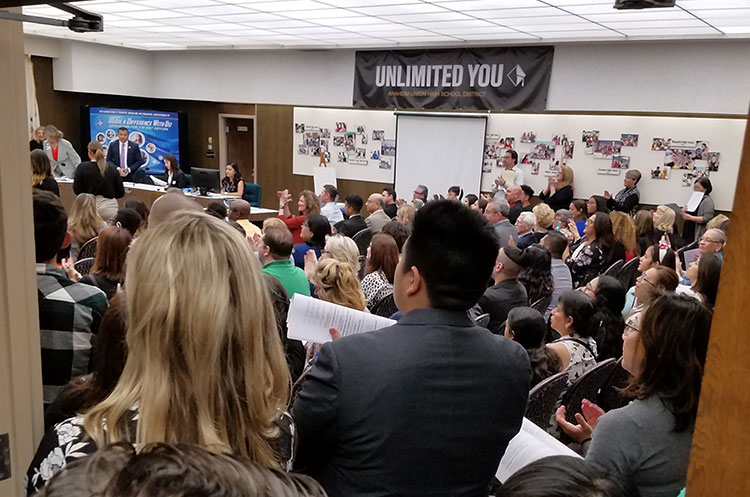 Parents filling the meeting room as it prepares to get started! 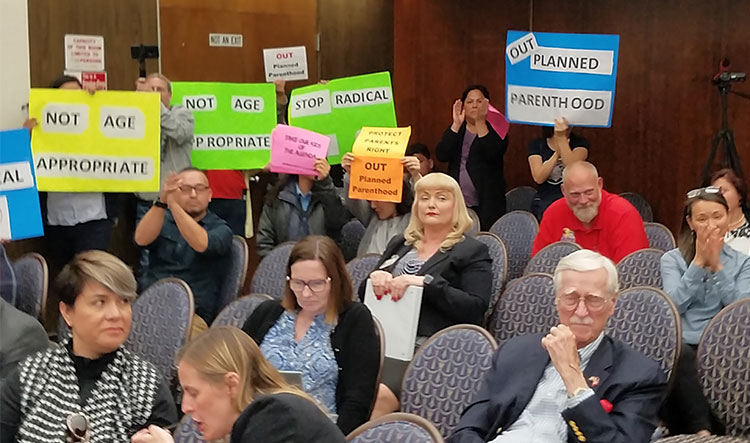 ...And making sure the politicians know exactly why they're there!

The parents described in detail how the Board and the schools purposefully keep them confused, frustrated, and in the dark. 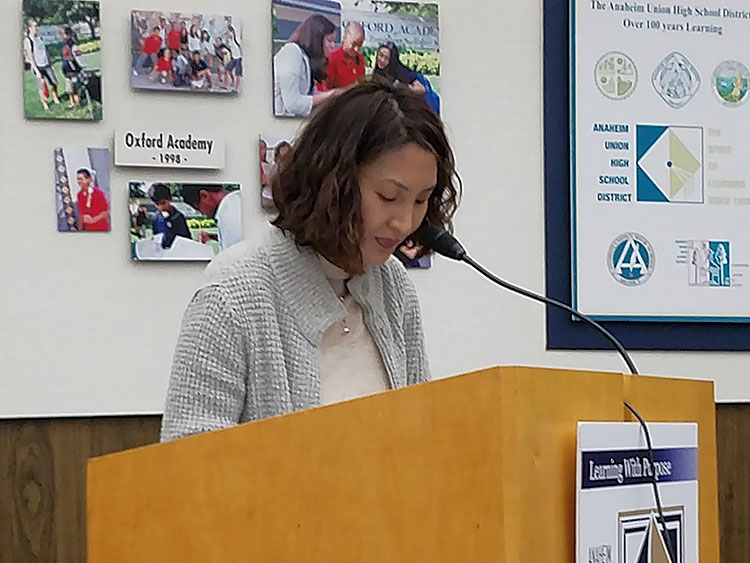 This mother tried to email her daughter’s experience in class to the Board members. But the school’s email rejected her emails because of the sexual words she used – the same words the Board is using with the children! Why is that, she asked!

Many parents struggle to make time to meet with their children’s teachers. This parent went out of his way three separate times, and only after the third visit did the school provide a copy of the lesson. Yet even then, the printing was so small that he could not read it! Most of the information was shoved onto other parents in different schools—500 pages!—with little time for the parents to review the material and object to its implementation. 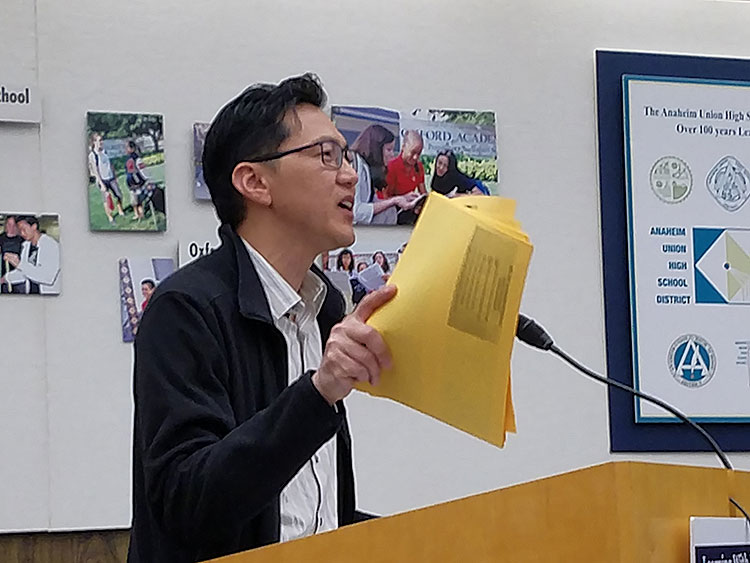 This father showed the Board members what a parent receives when he asks for the course description. A document with print so small it’s almost impossible to read. 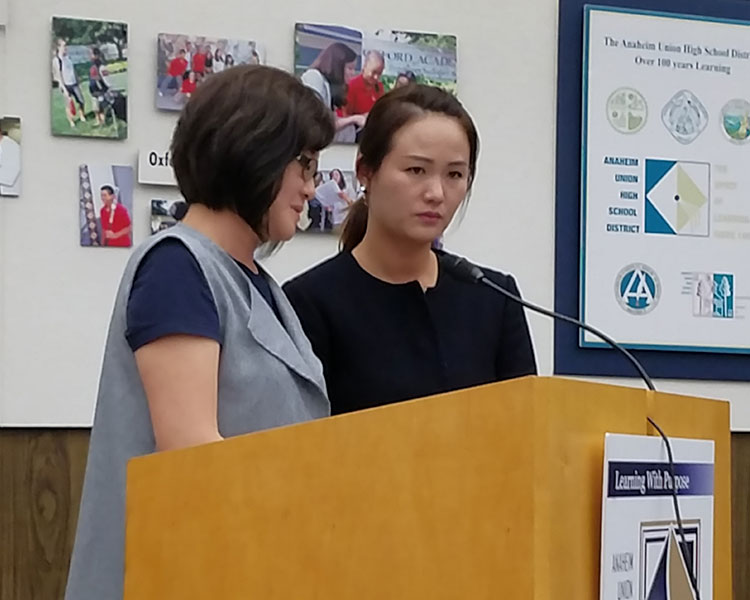 This mother, originally from Korea, spoke through an interpreter to relate what her son shared with her. In one of the sex-ed sessions, students in a seventh-grade class saw a video of a woman being raped! 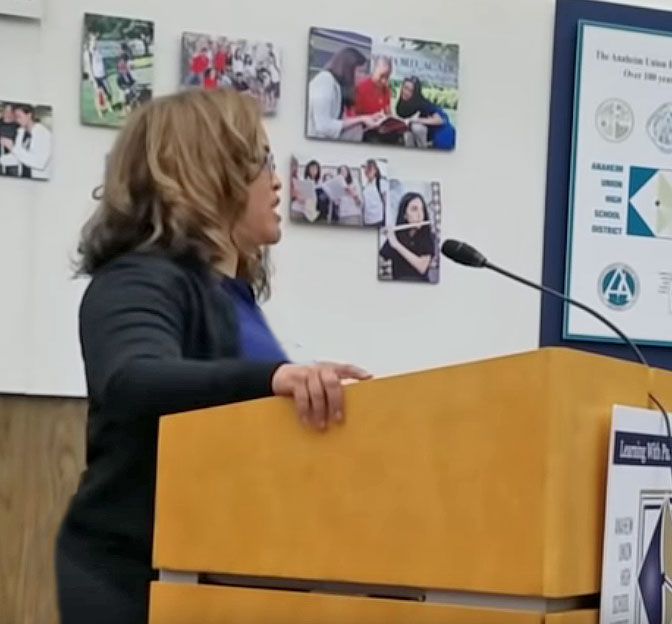 Shanda told the Board: We have a problem, because nobody is vetting this curriculum. The curriculum has not been through a review board. And who are these people coming into the district, and why are you not explaining anything to the parents? 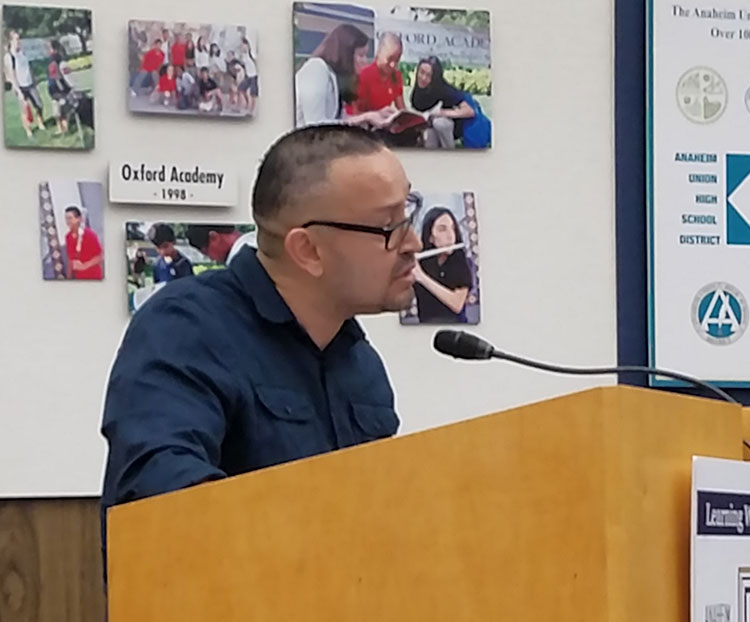 This father said what everyone was feeling: despite the law’s apparent mandate of affirming homosexual relationships, parents don’t want that. So don’t do it, he said!

Video of the April 11 Board meeting, taped by MassResistance

A fight to the finish coming up

Through all this, the Board seemed … bored. It certainly reveals the perverse and bizarre mentality that elected school officials seem to have these days. 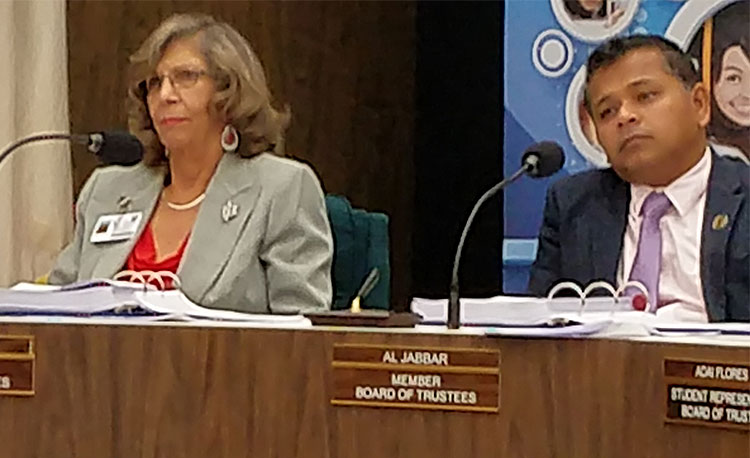 As Shanda addressed the Board, this was their bland reaction.

Most people have no idea what's really being taught to children in public schools today. And the schools like it that way.

But even more frightening: Too many parents don't realize how little their school board members even care that young schoolchildren are being exposed to the most graphic, destructive sexual and homosexual material in their schools. The politicians are much more interested in appeasing the special interests. We've seen that for decades.

But the Anaheim Union High School District Board hasn’t seen what Shanda, a room full of furious parents, and California MassResistance are capable of. More to come on this!

In the months since Shanda and California MassResistance won the transgender indoctrination battle in the Anaheim Elementary School district that success has led directly to other notable victories:

One success can cause a chain reaction. That’s why unrelenting pro-family engagement is so important!