Direct discussion with them revealed a lot! 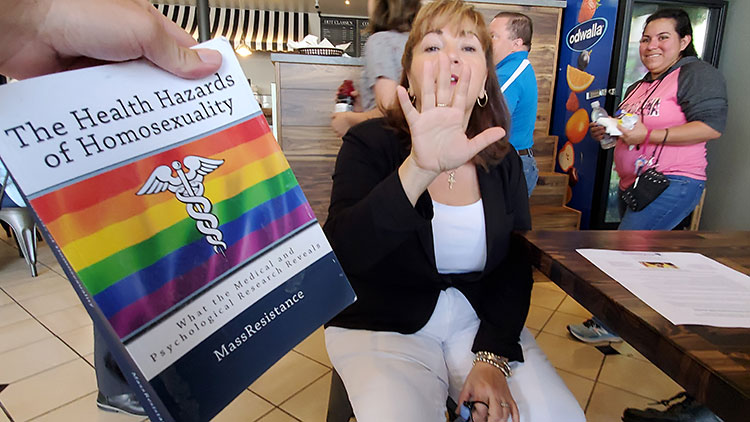 Congresswoman Linda Sanchez of CA was willing to sit down with us, but would not take a copy of our book, The Health Hazards of Homosexuality, which documents huge problems regarding the "Equality Act."

Again, MassResistance breaks the mold when it comes to fighting the culture war.

Last week the US House of Representatives passed Bill HR5, the tyrannical “Equality Act,” by a vote of 236 to 173. As we recently reported, it would radically re-write the nation’s Civil Rights Act to force the homosexual and transgender agendas into the lives of every citizen. And it’s being pushed by the national LGBT movement and much of Corporate America. It now goes to the US Senate. 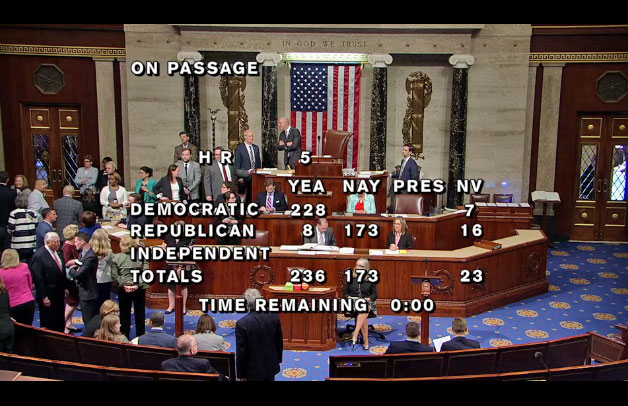 This was the scene when the bill officially passed. At that point, several Reps stood up and applauded.

This vote was not unexpected. The US House is controlled by pro-LGBT Democrats who have become unbelievably radical. Every House Democrat was a co-sponsor of the bill except one (Daniel Lipinski of IL) – and he caved in at the end and supported it. Eight RINO Republicans also voted for it. (See the vote HERE.)

Before the vote: MassResistance talks with seven liberal Congressmen

During the weeks leading up to the vote, most pro-family groups put their efforts on pressuring House Republicans to stick together and try to stop it, though they are outnumbered.

But MassResistance decided to take a more aggressive approach. We focused on liberal Democrat Congressmen. And we personally engaged them on this issue! Our National Organization Director, Arthur Schaper, selected seven of the worst in California.

Arthur, along with some constituents, went to their Congressman’s local “town hall” or “coffee” events and confronted them face-to-face about their support for the hideous “Equality Act.” It wasn’t easy getting them to talk with him, yet he persisted. 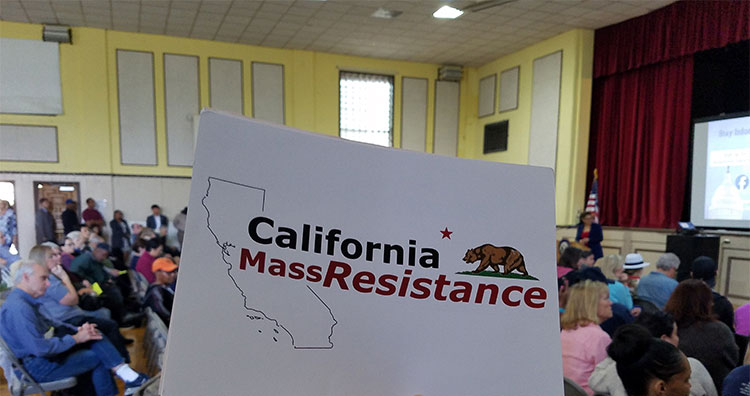 Most of these town hall events were full of liberal supporters, but this time local MassResistance people also showed up!

No other pro-family group does this. And of course, these were all left-wing Democrat politicians, so their local town hall events were full of their supporters and definitely “enemy territory” for conservatives. 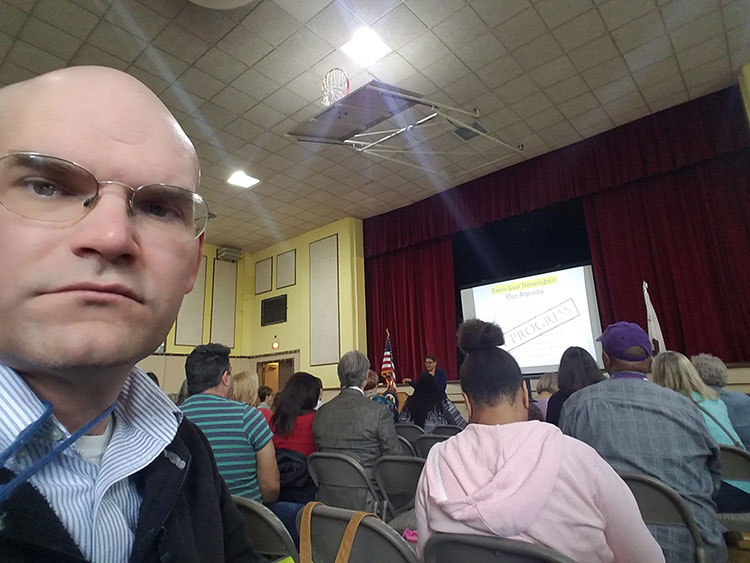 Arthur Schaper, our national organization director, who also lives in California, is unafraid to take on the Left or engage liberal politicians on the issues.

Arthur told these Congressmen the hard truths and asked them the hard questions about this lunatic and oppressive legislation. He did his best to pull answers out of them, and in the end, only one of them (a former Republican turned Democrat) refused to say something. 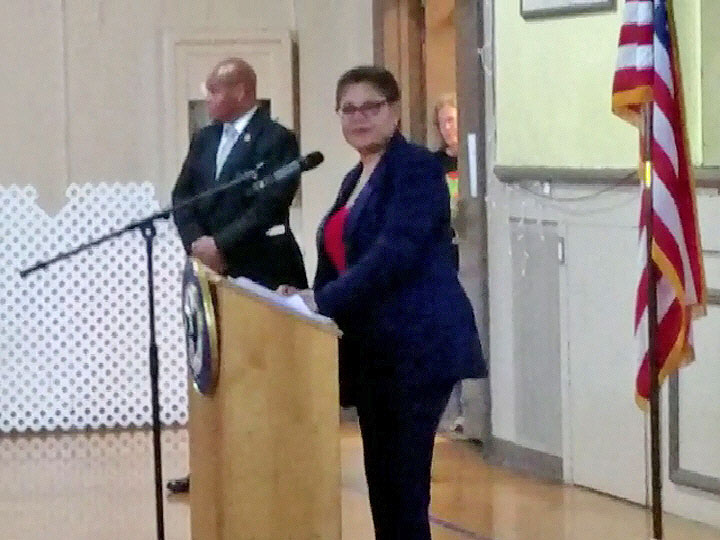 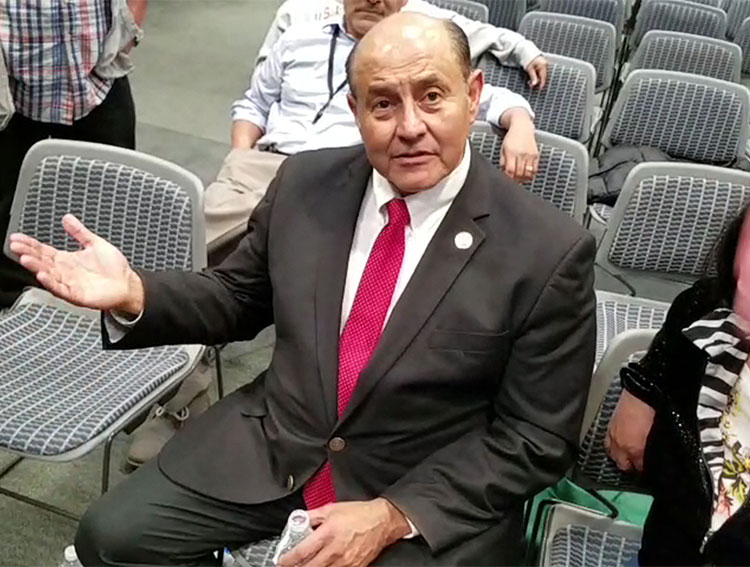 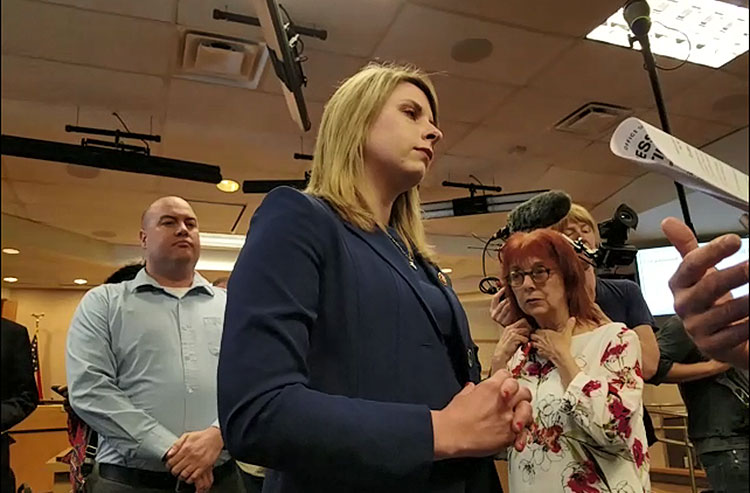 Congresswoman Katie Hill (openly bisexual) at her April 27 Town Hall in Santa Clarita, CA. She was less hostile to our criticism on this issue than we expected, but still completely committed to the LGBT agenda. 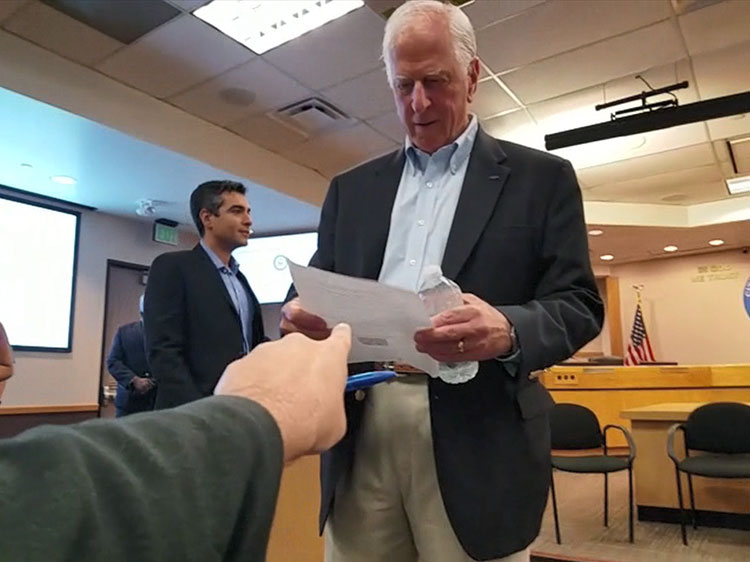 Congressman Mike Thompson at the same April 27 Town Hall in Santa Clarita, CA, reads the flyer on the Equality Act that Arthur (pointing) just handed to him. 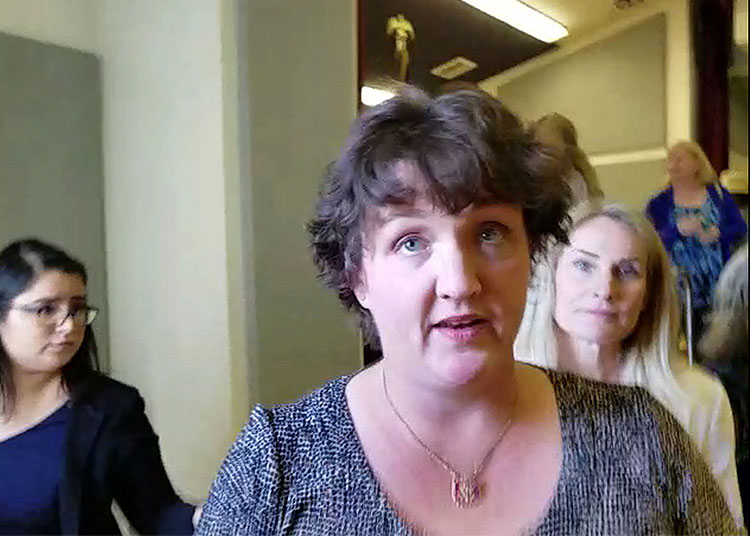 Congresswoman Katie Porter at May 4 Town Hall in Irvine, CA would not address Arthur's points at all, except to say "I'm proud to support the Equality Act." 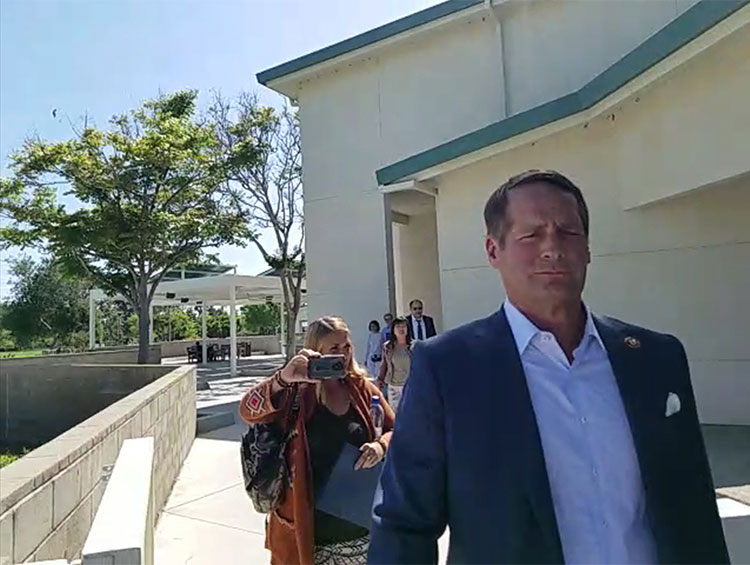 Congressman Harley Rouda (a former Republican who morphed into a liberal Democrat) also at the May 4 Town Hall in Irvine, CA, was afraid to even talk to Arther. He would look right at Arthur and quickly walk away. Arthur tried again outside the hall, and got the same treatment. Definitely the weirdest encounter of all. 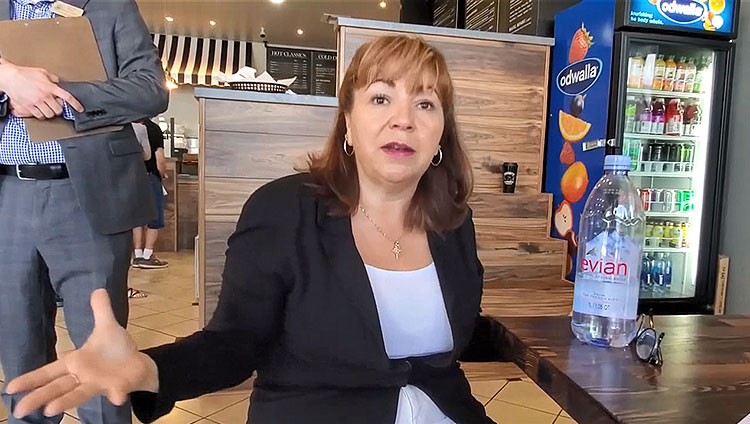 Congresswoman Linda Sanchez sat down and talked with Arthur at her May 11 Community Coffee in La Mirada, CA.

Here's what we learned from talking to them

What we learned is quite frightening, though not really surprising.

First of all, we don’t think that any of these Congressmen actually read the text of the bill. They all seemed to understand it in the vague sense of “anti-discrimination” (especially relating to employment). But when Arthur brought up specific aspects of it, such as how it will force women athletes to compete with “transgenders” who are actually men, or how it will outlaw certain therapy to help people leave homosexuality, he would just get a blank stare from them.

Second, many of them had obviously been given talking points by LGBT activists. Congressman Lou Correa told his town hall crowd that he came to his decision because “I closed my eyes and asked myself: In fifty years how will history judge us?” This is right out of the LGBT playbook.

Third, it’s clear that none of these Congressmen even cares what the bill actually says or what it would do to society. They just want to be part of the “progressives” and so they adopted that group-think. That was reflected by their unwillingness to actually discuss it on any rational level with Arthur (or anyone else there who tried). Nor were any of them interested in exploring any facts that contradicted the accepted narrative.

This complete disconnect from fact, logic, and real discussion is very dangerous and should be frightening to everyone. But this is the horrible state of American democracy today.

Nevertheless, we believe it's very important to engage to them directly, face-to-face, with real facts and real questions. They're certainly not going to hear it from anyone else around them! 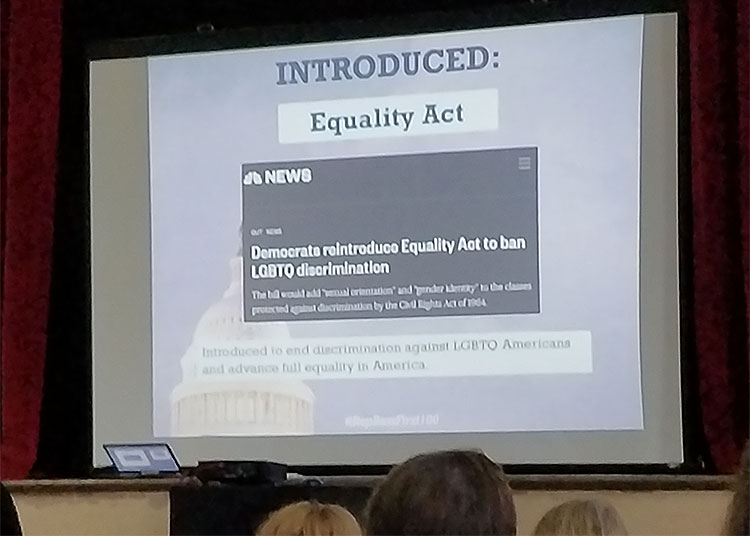 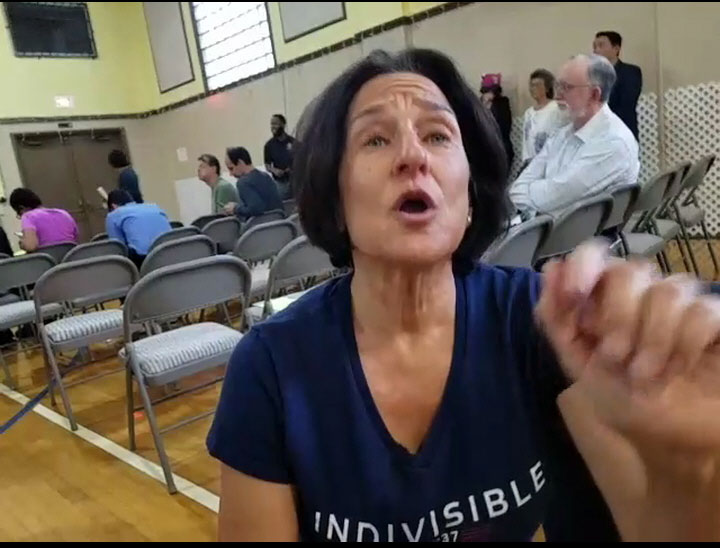 At most of the town halls, members of the rabid hard-left "Indivisible" local chapters were also there. This woman recognized Arthur and came over to harass him. Of course, Arthur was not bothered a bit and dished it right back to her!

And more pressure from MassResistance activists around the country!

People passed out flyers at their churches or on street corners. They worked to get large numbers of people to call and email their Congressmen with their outrage about this bill. People found these flyers to be very informative! 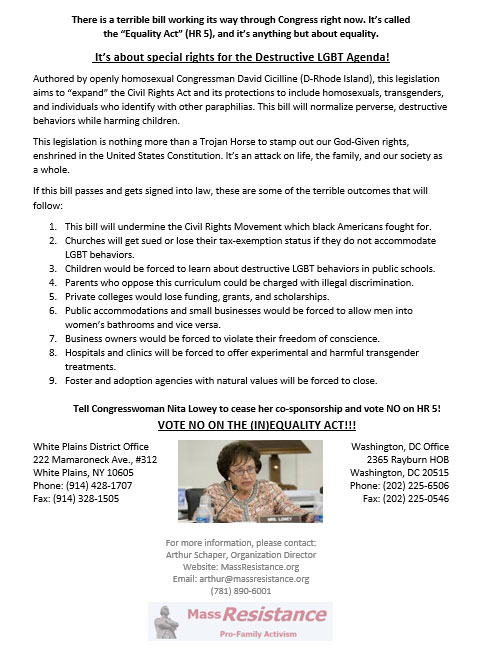 Here is a sample of the flyers passed out at the town hall events and around the country. Our NINE POINTS of the dangers of the bill have been quoted in several media outlets.

We think that this at least made the Congressmen aware that their support for this bizarre legislation will not be forgotten at election time, next year. Yesterday, in fact, Wall Street Journal columnist James Freeman speculated that the Equality Bill passage by the US House could be “the sleeper issue of 2020” that could come back to haunt these Reps. Probably fearing some backlash, seven of the Democratic House Reps who co-sponsored it declined to actually vote on it! Those seven include three who are running for President: Seth Moulton, Tim Ryan, and Eric Swalwell.

On to the Senate

Since the Senate is controlled by Republicans and the bill is not being pushed by the leadership, it’s a different political situation. Obviously, a major concern is how the RINOs will react to the huge LGBT onslaught, and whether the leadership will cave.

On the other hand, it could die in committee. As we write this, the bill is in the Senate Judiciary Committee, which is dominated by strong conservatives.

In any case, it’s a good idea now urge Senator Mitch McConnell and his leadership team to hold the line. Nothing can be taken for granted! Here are their contact forms:

MassResistance will help step up the game on these seven squishy Republicans Senators if their leadership does agree to bring the bill up:

Sadly, we can’t trust that President Trump would veto this bill if passed by the Senate, especially if it were modified to take out a few of the “worst” parts..

We’ll keep you informed on all this! 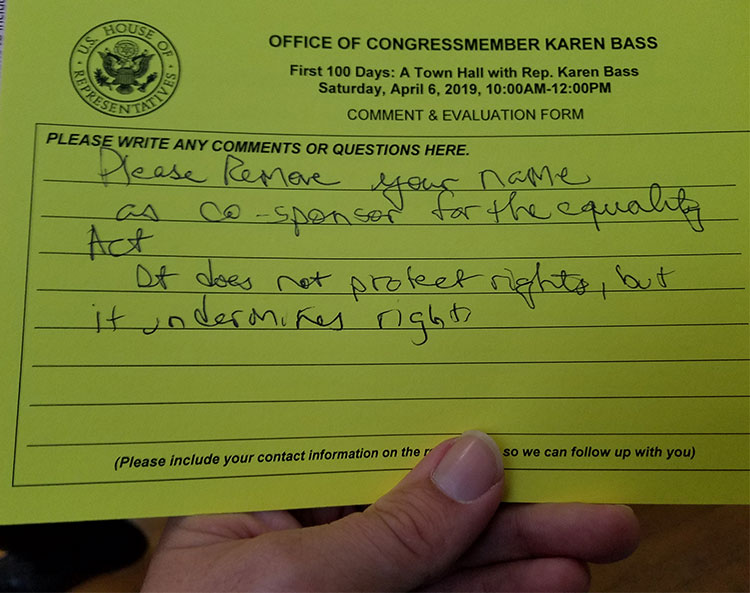