How to take on a hostile media interview about “Drag Queens” in libraries, the homosexual lifestyle, and more.

Unfortunately, most pro-family conservatives aren’t ready for this.

Whenever you see pro-family conservatives on mainstream media TV (such as Fox News) or radio shows being interviewed about critical “culture war” issues – such as homosexuality, transgenderism, etc. – you always see the same thing. The people on our side make polite, non-confrontational arguments that make a point, but are careful not to offend anyone.

That is a terribly flawed strategy. It gives the audience the idea that our arguments are mushy and the issues are not important enough for us to get upset about them. But pro-family conservatives do it anyway.

Not MassResistance! When the public hears us being interviewed on these issues, they hear things they haven’t heard before, with a passion and knowledge of the subject they never hear -- and are forced to think about it! And we put the liberals in their place. To put it succinctly, aggressively telling the truth is critically important.

A left-wing talk show host invites MassResistance for an interview

On Sept 19, 2019, Arthur Schaper of MassResistance was invited to be interviewed on the Las Vegas AM/FM talk station KWDM by Brian Shapiro (not to be confused with Ben Shapiro, the conservative pundit). Shapiro is the very liberal host of “The Vegas Take” daily radio show, and is known for his staunch left-wing views.

Shapiro invited Arthur to talk about a Drag Queen Story Hour coming to a public library in Henderson, NV, a Las Vegas suburb.  The previous week, as we’ve reported, Arthur was on Shapiro’s show debating a homosexual activist (who wasn’t a good debater) about the Drag Queen issue. This time Shapiro wanted to take on Arthur himself directly! Not a good idea, as it turned out!

The clip above is the first segment of the show, which was the actual interview. In the following segments the host veered into other subjects (including some childish name-calling by Shapiro) and took phone calls. Also participating in the interview was Shapiro’s co-host, J.D. Sharp, though he said very little.

As you can hear in the clip, Arthur was not passive. He took on and basically overwhelmed Shapiro’s attacks with his passion, facts and clear thinking. Shapiro was clearly not ready for that from any conservative.

This program is also quite illuminating in the way it shows Shapiro’s typical liberal approach to issues. When Shapiro was forced to concede too much of Arthur’s argument on Drag Queens in libraries, he attempted to challenge Arthur’s position that homosexual behavior itself is destructive to everyone involved with it. (This is a point conservatives are always afraid to make.) When Arthur offered medical information gathered in our book The Health Hazards of Homosexuality, Shapiro openly admits that his opinions are good enough for him and he’s not interested in seeing actual data! But Arthur continues to push forward, as Shapiro was forced to backpedal.

A big problem for Shapiro in defending the Drag Queen program was this particular Drag Queen. MassResistance had done an enormous amount of research on him. We had uncovered some horrible things, completely indefensible, which Arthur was not hesitant to discuss in detail. 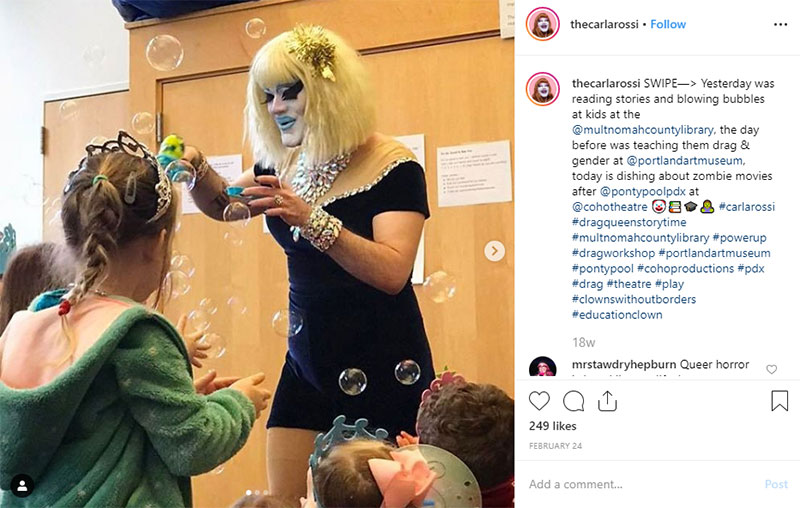 This is the Drag Queen, a man who calls himself "Carla Rossi", scheduled to come to town to read to young children.

The Drag Queen coming to the Henderson, NV library is a man who uses the stage name “Carla Rossi.” Last year “Carla Rossi” caused a huge uproar in Multnomah County Library in Oregon when he got on the floor and let small children crawl on top of him. 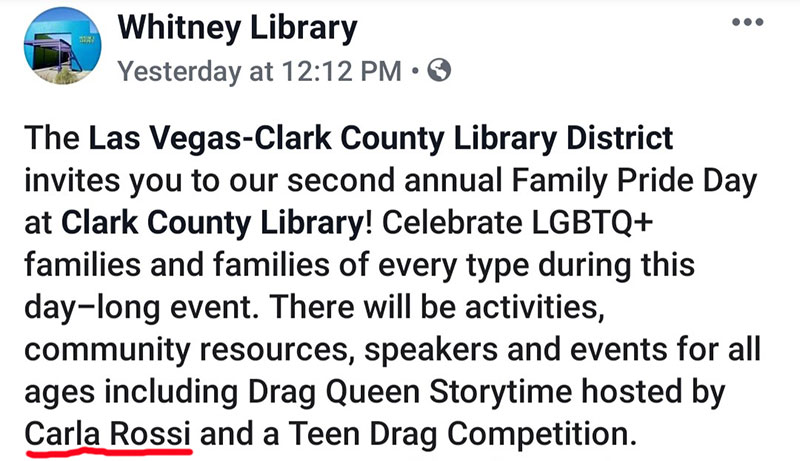 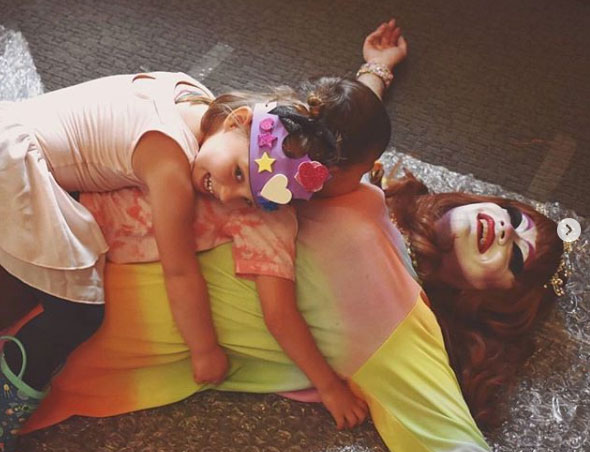 A photo of "Carla Rossi" in a public library in Oregon last year.

MassResistance also found disgusting and sexually explicit social media posts by Carla Rossi, as Arthur mentioned in the interview, as well as weird satanic imagery. We are not including those images directly in this post, but you can see them here in our 64-page report on Drag Queen Carla Rossi.

Getting Shapiro the facts

Finally, even though Shapiro seemed to be disinterested in actual data, just in case he changes his mind we’ve sent him a free copy of our book, The Health Hazards of Homosexuality. Hopefully, he’ll find it useful! 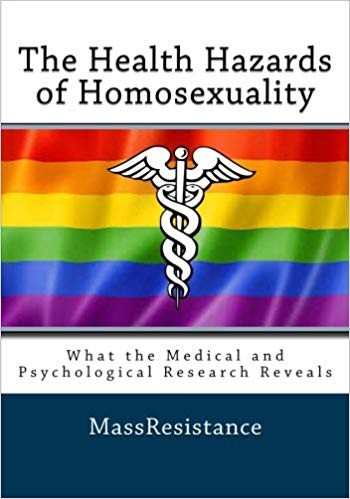 We sent a free copy to radio host Brian Shapiro. Hopefully he'll learn some actual facts to go with his opinions.

Next time you see a pro-family conservative on Fox News (where so many of them go) or on a mainstream media TV or radio show you’ll notice the difference.

If our side is going to win hearts and minds, we must do (at least) two things: (1) make it clear that these issues are incredibly important, not just things we “have a different opinion about”; and (2) be relentless about telling the truth, even if it offends liberals.

It really works. When people tune in, more of them “get it.” And it drives the Left crazy!